The Nameless Mod, A Total Conversion for Deus Ex. The ModDB Staff get a sneak peek, but is it worth the bandwidth?

Deus Ex is just one of those games; the mere mention of its name sends you back to the year 2000 when you first set foot in the amazing cyberpunk action role-playing game. Nine years (count em’) have passed and modern games still have yet to create something this amazing, sure there has been attempts to knock the game off its high pedestal and even a sequel that failed to re-capture the charm but nothing has ever lived up to expectations, until now.

Seven years in the making, The Nameless Mod has bravely stepped into the spotlight to give you all another reason to re-install the amazing game to play this equally amazing mod. Putting focus on a well driven narrative with over 195,000 lines (or 14 hours) of dialog and the amazing role-playing aspects that made the original game what it is, you can expect that you’re in for one hell of a good ride. So buckle up.

You play as Trestkon, an intelligence agent with a mixed past who is called back from retirement to help the administration of a virtual community called Forum City. One of the most powerful Moderators, Deus Diablo, has vanished into thin air and it’s your job to find him at all costs. In true Deus Ex fashion you’re free to tackle this problem any way you see fit. The story starts off simple, giving you the choice to enlist your services in either one of the two major corporations: PlanetDeusEx or World Corp. Both offer completely different stories that will keep you entertained from start to finish. After a few main missions are under your belt your actions really start to turn heads within Forum City and you might find yourself thinking hard about conversation choices and vital mission outcomes. Side quests follow a similar setup where a large chunk can be completed by joining one of two other factions that really don’t have much to do with the main story but still warrant additional play-throughs. The average game time for the main story clocks in at around 15 hours, so you might want to play this over a weekend to really digest the story. 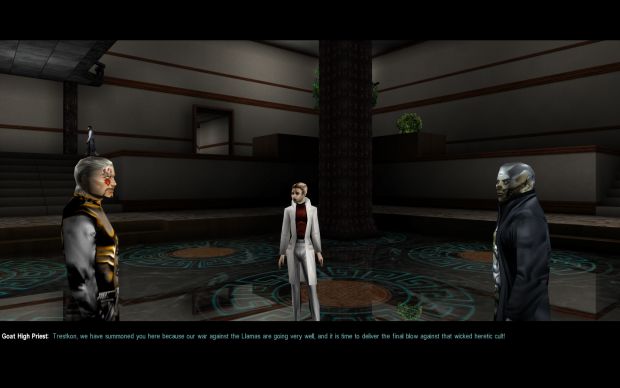 Exciting side plots can lead to some interesting situations.

I’ll start this off by saying the Deus Ex engine has aged quite well, if you can get over the low resolution textures on the players which are only ever apparent during close-ups in conversations. Due to how old the engine is, vanilla Deus Ex does have noticeable problems running on newer machines. Anything with a multicore processor will make the game run much faster than it should but thanks to Hanfling's launcher for Deus Ex—which is bundled with TNM—it runs without any problems. Also packaged with TNM is an enhanced OpenGL renderer which really pushes the limit on texture sizes, map, weapon and character details along with a simple weather system thrown in for good measure. It seems that Deus Ex still won’t go down without a fight so you can expect to come across some stunning locations and vistas on your quest to save Forum City. 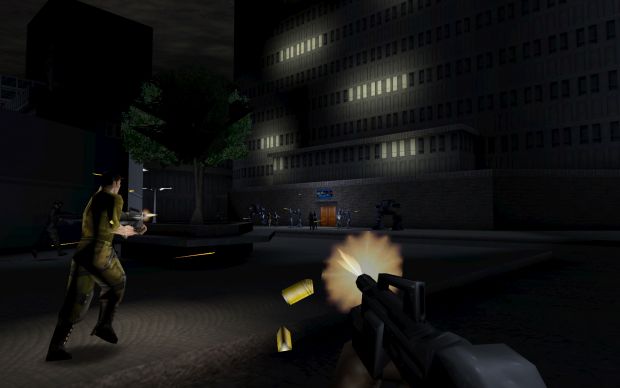 Oh, you know your going down PDX.

TNM prides itself on the vast amount of recorded dialog within the game. The main characters that make up the main story are all top-notch, recorded by a variety of professional and semi-professional voice actors both male and female. Outside the main quest the voices range from great to mediocre— and there is a distinct lack of thirteen year old male voice actors—which is always a great thing! The soundtrack on the other hand is amazing from the moment you double-click that desktop shortcut. There's over one hundred tracks covering death, ambient and action music as well as healthy compliment of new sound effects. All this is made by eight composers, four of which are professional, and two sound technicians. Throughout the entire 15 hour experience, the music never misses a beat and provides a soundtrack that approaches professional-level quality. 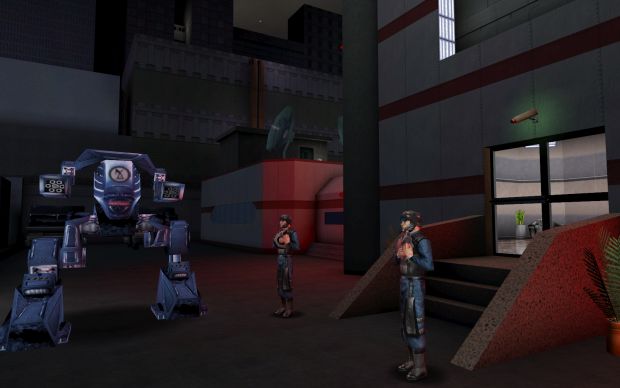 Just chillin with the robot.

TNM sure feels like it has everything right, it even feels like how Deus Ex feels and plays. With so many ways to approach quests or obstacles, it really gives the player a chance and an excuse to explore. You can run and gun, hack, program, pick locks, sneak around or, my personal favorite, run in only using your trusty sword and attack from the shadows! Just like Deus Ex, the non-linear gameplay and and robust character skills customization increase the level of investment to your Forum City avatar. Leveling up your player while playing the game your way makes you feel more of a badass then you could possibly imagine. Yeah, I totally just hacked that robot to kill all the enemies in that room! Your actions really do mean a great deal in this game, kill a NPC and you might have a consequence that you will need to face later because of it. 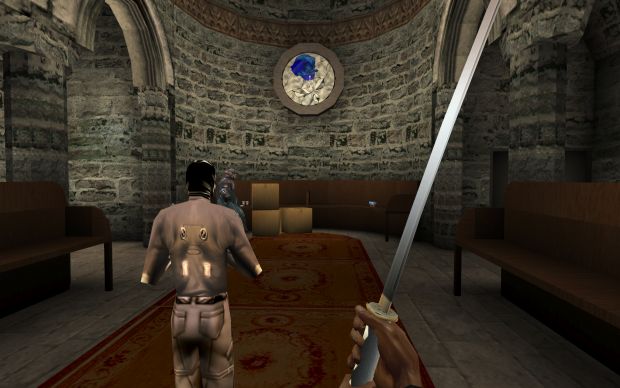 The only faults I can find in this mod are two things: the sometimes stupid AI (admittedly from a 8 year old game) can lead to some frustrating moments as supposed allied NPCs will turn on you for no reason. The second is the confusing names for organizations and the acronyms used for them. Characters won't refer to businesses in the game by their full names. After the game has run through the introduction for each corporate conglomerate, from then on they are referred to by their 3-letter acronyms: PDX, DXE, DXI, DXO… yeah you get the picture. Story plots in TNM can sometimes be hard to understand if you didn’t read something you should have or haven't asked someone enough questions. You can often come off feeling there is a gap somewhere in the narrative that you missed and in some cases it's too late to go back. This mod begs for thorough exploration and detective work to root out the specifics of not only the main story, but all of the sub-plots as well.

After seven years of stewing, Nameless is nearly ready to eat and boy, oh boy, it is a feast. Even with the amazing gameplay that Deus Ex perfected, the ability to re-play and have a completely different experience each time is an ambitious accomplishment for any single player mod. Right until the end, TNM keeps you wanting more and it successfully brings Forum City to life. Your choices in-game count, and the longer you play you'll be able to see just how much you can alter the path of every stranger you come across. It’s a must download—hell, purchase Deus Ex and experience both, you won’t regret it! The Nameless Mod will be ready for release February 24, 2009.

But it's an AWESOME katana :-p

Mind you the February 24 date is not exact, but ModDB's system does not allow us to only specify a month. However, we ARE looking pretty good for a release around that time, just... take it with a grain of salt. It largely hinges on the last 3 voice actors.

way to compete with Empire Total War guys.. :( Now I won't have any time to play both.

Do those last 3 voice actors know that we are all waiting for them...?

Good luck to 'em finishing their lines off.

I am ready to play it next Monday!

Great Job guys! Besides left over Deus Ex errors this mod is PERFECT!!!!!!!!!

I'll add that we've loosened up the AI's stimuli significantly after Dave's playthrough because he complained about his friends turning on him in a fight, so hopefully those problems will be gone in the final release :)

Looks like it may well be time to dig up my copy of Deus Ex.

i know this aint tech support but i just blew the dust off my old Deus ex CD and found that it wont install. my computers pretty strong and i use XP64, do we have a fix for this or not? if we dont i'll be terribly dissappointed.

i can see a lot of people having similar problems, have you made a fix?

Dunno about XP64, but it's been tested to work fine on 64-bit Vista. Try googling it or something.

What's the error you get when you try and install? If you head over to our forums I'm sure we could do a bit of tech support :)

This is going to be epic.

The main plot sounds stupid. But it might be awesome.

Actually it's stupid AND awesome.

Will this slowdown-eliminating launcher work with Steam's version of the game?

Yes, TNM has successfully been tested on Steam-DX : )

A related question. Will the mod work with Sold Out's version of the game?

I'm not familiar with Sold Out, is it a download service?

SoldOut was a budget PC title Publisher for Eidos- I have their versions of Anachronox and Nomad Soul. They aren't around anymore, they were bought out and merged with another similar publisher as I recall.

I think it should work fine with their versions, I mean I used the Red Ant one with HDTP (which is basically the exact same copy as Red Ant are just an Australian clone of SoldOut) so it should work. I think he may be confused with the fact that SoldOut use their own custom installers to setup their games, however the file structure is essentially identical to the original store bought GOTY Edition.

Oh, well in that case it should work fine with SoldOut's version.