With his fourth Dark Mod mission release (the most productive mapper yet) Jesps is another high profile mission author who released his mission before the close of 2010. We are happy to reflect on Jesps progress. 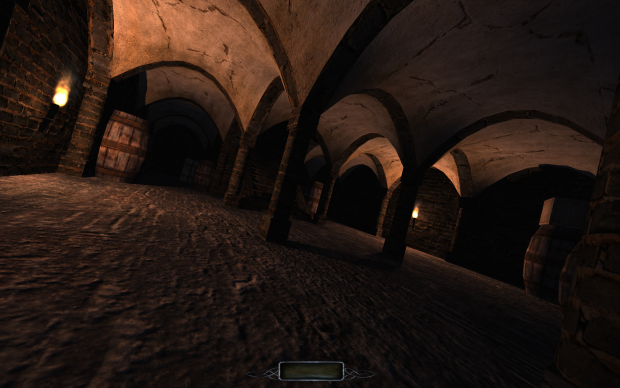 With his background in Thief 2 mapping, Jesps is the kind of community member that The Dark Mod team always hopes will pickup Dark Radiant (The Dark Mod's mission editor) and begin a project for the mod. Jesps released one of the first fan missions for the 1.0 release of The Dark Mod and has steadily been improving his craft ever since. Jesps seems to revel in placing dark humor and hidden elements in his missions. He also seems to have found a way to conjure our inner child as his missions are filled with scenarios that just scream "the will be fun to play and explore"... an expert at the "joy of play" who even knows instinctively how to make his "easy mode" entertaining (very rare).

Many people have remarked that Mad's Mountain was a little easy, yet strangely everyone who made this observation also found the mission INCREDIBLY FUN. Can you provide any tips to your fellow mission authors for designing their "Easy Mode"?


Well, I do not design my maps with the intention of being easy. What people have often pointed out is that there are many shadows to hide in, or few lights if you will. I also usually try to make places to hide if the guards are looking for you (such as on top of a cupboard, inside crates, etc.).

(Well that was a poor start for an interview, it looks like I may inadvertently paid a back-handed compliment... Oh well, onward with the questions! ).


Your first "fan mission" was for Thief 2, "Scepter of Dor Am'al Part:1" correct?


Correct. It was however far from the first thing I build in a game editor. Ever since the first game I got with an editor, Half Life 1, I have always checked out editors for the games once I finished them (and often before). Mostly I do not build much before abandoning the editor, either because the game or the editor itself is not that good.


How long did it take you to make this and did you enjoy the process?


I do not remember how long it took to make, but I enjoyed it or I would never have finished it. There are however many aspects of DromEd (Thief's mission editor) that put me off, such as the need to use text input for certain commands.


What was it like when you switched to Dark Radiant?


Very, very good. When Thief's Den was released I visited the Dark Mod's website for the first time ever to see what the fuss was all about. And I liked what I saw. After playing Thief's Den I knew that The Dark Mod would be something I would like to play. And when I had tried out the editor it was a very easy decision to shift from DromEd to DarkRadiant.


Was "The Crown of Penitence" your first attempt at a Darkmod mission?


The first thing I build did not amount to anything. I started to build a few rooms, then added a street and a small castle. But I did not build with any particular aim, other than to try out the different building techniques.

I then decided to build a ship. Partly inspired by the picture of the galleon on the Dark Mod's website. And partly to limit my self to a small area. That way I could avoid getting carried away by constantly adding more, and more rooms to the map. That map was released under the name Pandora's Box.

The Crown of Penitence was my entry to an internal contest. It was furthermore released at the same time as The Dark Mod 1.0 if I am not mistaken.


What happened with Pandora's Box what drove you to hand this off to Fidcal?


When I had “finished” the map it was fit for the beta stage that The Dark Mod was in at that time. After the mod got to version 1.0 Fidcal offered to update Pandora's Box, and I jumped at the offer. And considering how much he improved it, I am glad I did.


I'm always interested in the idea of collaboration, is there any mission author who you would like to work with?

It is not something I have given much thought. I primarily map for the enjoyment of mapping. However if someone has a good story they want in The Dark Mod and need a mapper I would certainly consider thinking about it.


Are there any other games or activities besides Thief that inspire your design choices, where do you get your game-play ideas from?


I get most of my architecture ideas from the internet. I have also gotten a habit of noticing special features about old buildings, such as ceilings, pillars and such.


"Mad's Mountain" was primarily build from Lightwave models, tell us about that process.


Initially I was planning to build it from patches and brushes. That was not a big success, however. There were gaps everywhere, and it progressed very slowly. So I figured it would be a good idea to build it in Blender, and at the same time get some experience in that program. And I think the result turned out pretty well for a Blender novice such as myself, though an experienced Blender artist could undoubtedly have made something many times better.


When did you start "Flakebridge Monastery"?


Windows tells me that the map file was created May 4th 2010. However, It was a process that was very much on/off. There were periods where I was so burn out that I had my doubts if the mission would ever be finished.


In "Mad's Mountain" a drunken goon gets progressively worse at arithmetic, have you personally experienced this process or is there yet awaiting some hidden meaning in those numbers?


The numbers are the longitude and latitude coordinates of where you can find my hidden treasure of gold and gems. Either that or they are just random numbers. But even random numbers can lead to something, so it might be worth checking out.

I will now replay "Mad's Mountain" for the 50th time and continue to look for coincidental numbers of things or connections everywhere.

(I will be institutionalized in a week or so...)

Great interview. I love hearing how a mapper thinks and designs. I wonder if Jesps has any tips where we he looks for architecture online.
I have been watching The Dark Mod for some time and now I'm inspired to try it again. Thanks Guys

We do have a "City Reference Pictures" thread stickied in our "Editors Guild" forum that I see many mappers visit and update so that might be a nice place to start (and I'm sure Jesps has taken a peek there as well)...