THE HIGH COURT OF THE CERIXX

From their homeworld's high court, the Justice Division of the Cerixx Sentinels serves as the galaxy's self-proclaimed judge, jury, and executioner. The Cerixx assert the galactic laws they enforce are for the common good, but rumors of rampant corruption have led many to allege they are nothing but a self-serving criminal enterprise. In response, the Cerixx have made the counterclaim that the galaxy is a dangerous place and it sure would be a shame if something happened to their accusers.

For nearly their entire existence, their homeworld's harsh and dangerous conditions confined the Cerixx to their icy caves. This short and stocky race, one devoid of natural defenses or creativity, was too weak to combat the wild ways of nature. With each supply run requiring a hazardous journey outside, those who survived learned to horde what they had and take care of their own needs first. Bartering became an essential skill for one's survival.

No one has unraveled the mystery of how this seemingly inconsequential race acquired the advanced technology that radically altered the trajectory of their existence. However it happened, once they gained control over their advanced human-sized mechs, their lives were changed forever. With these new found weapons they quickly dominated nature's challenges, broke free from their icebound prisons, and eventually reached the stars.

After years of being bullied into submission, technology made them feel powerful for the very first time. Power, and therefore tech, is now their obsession. Lacking an aptitude for scientific research, their Science Division must act more like brokers for the latest tech, using their wealth and influence to acquire the latest tech in any way possible.

Their sudden rise to power has led to a society built on avarice, arrogance, and aggression. It is said that every young Cerixx learns to serve themselves first, their empire second, and whoever can pay the most third. The formation and omnipresent threat of the Justice Division may be the only reason their empire managed to unite as one.

As chief justice of the Cerixx, Justin Vyrrin is the highest ranking and most feared member of the elite Justice Division. This status has made her the de facto leader of the Cerixx Sentinels.

The Cerixx fleet features their animated insignia as well as numerous hangar bays in support of their frequent use of AI piloted strike craft. 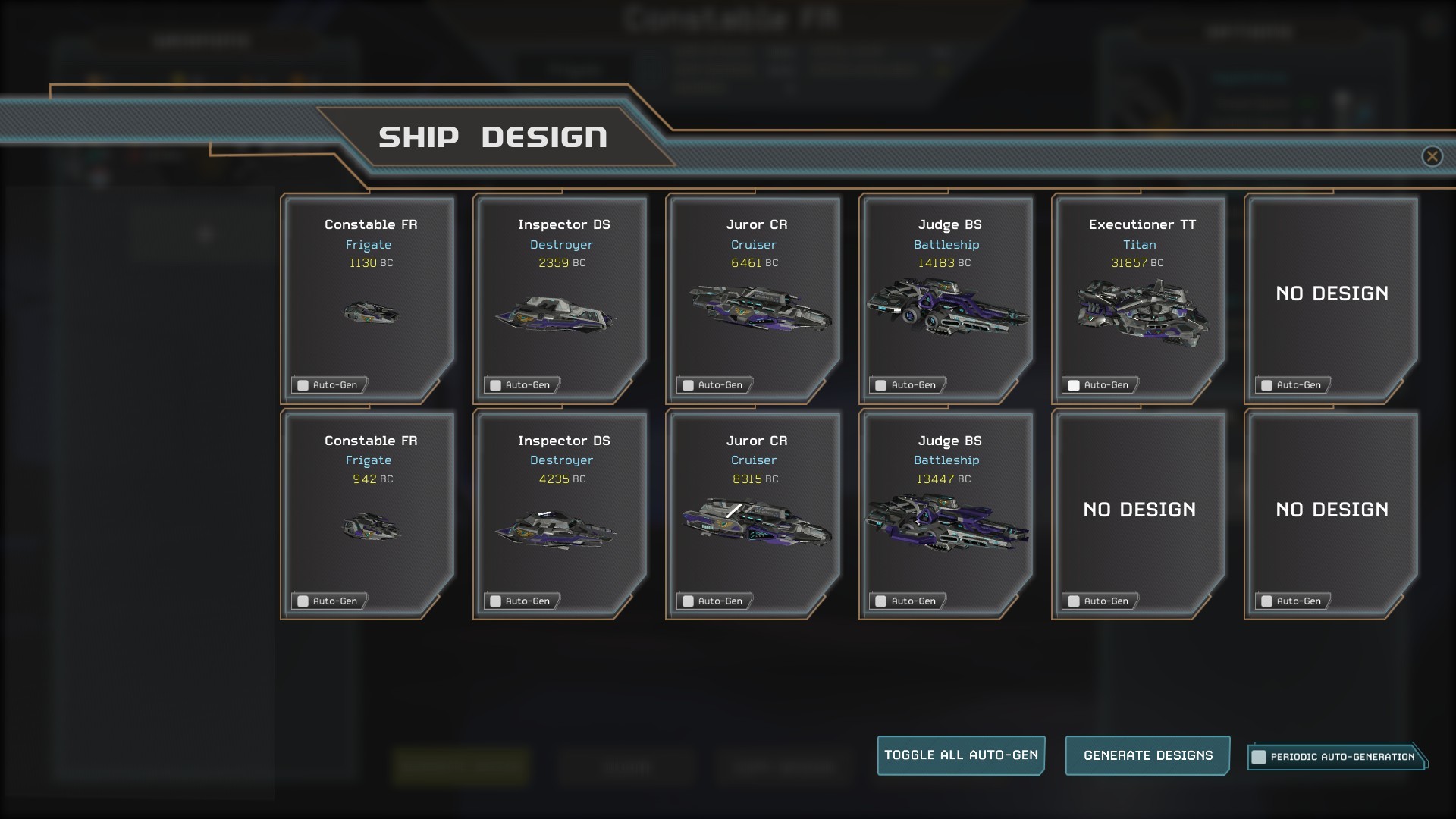 The "Executioner" titan is their command carrier responsible for bringing the galaxy's greatest fugitives to justice. Given its name, it may come as no surprise that justice most often involves the total annihilation of these threats. 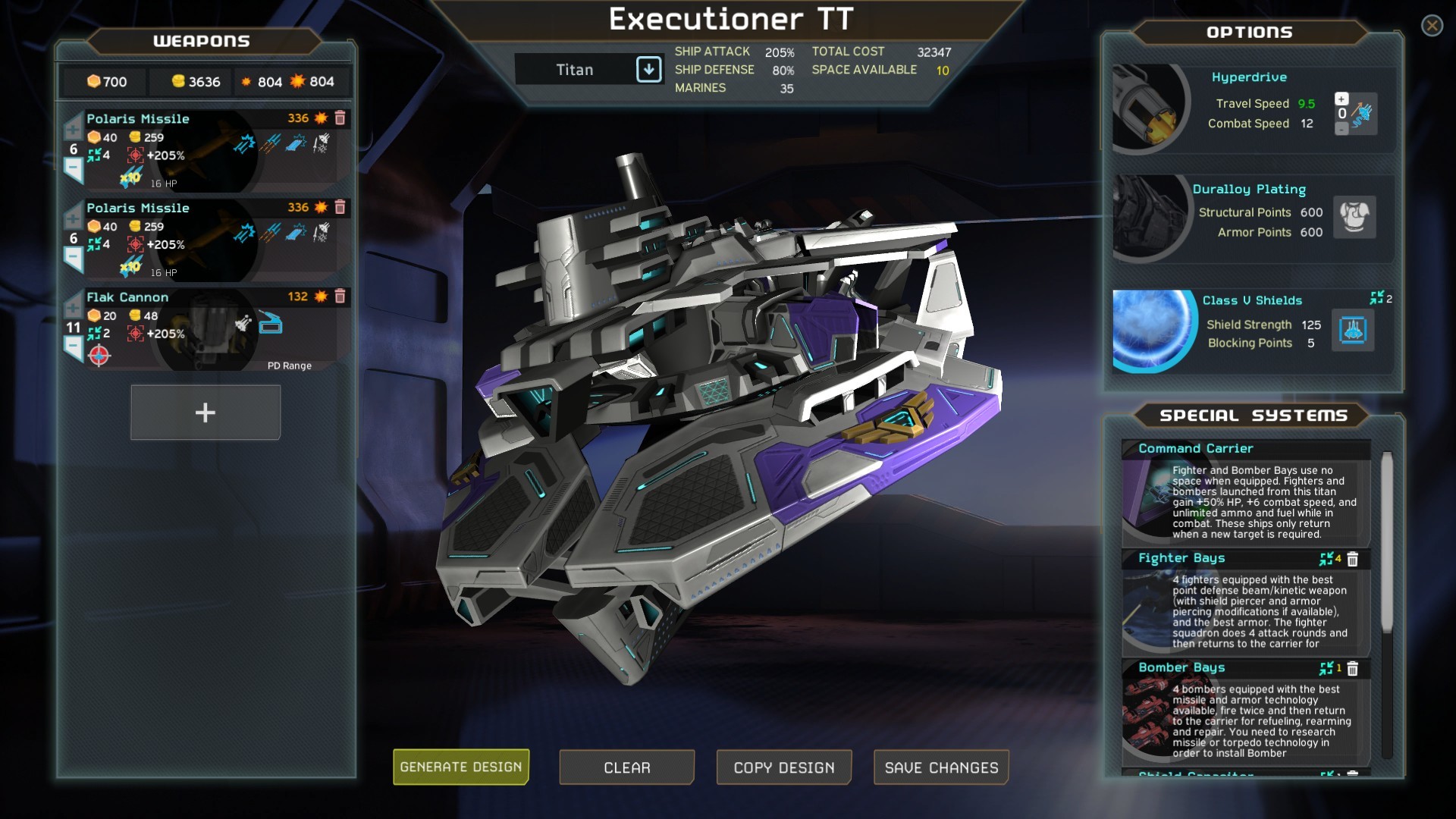 The Cerixx have inspired two new tracks that are added with Natural Law.

"Blasted to Beats", a combat track, features fast paced and inescapable beats that are just as bold and aggressive as they are.

"Writ of Habeas Corpses", their diplomatic track, features a chattering introduction to their high court followed by electronic sounds which ensure they have your undivided attention.

The Cerixx have obtained access to a powerful device which allows them to trap and detain rival fleets for "questioning". Whether they acquired this device off the black market, or via some other means, is yet another of this race's mysteries.

Containment allows placing a magnetic energy field on any system you've got basic scan data on and which is within your supply range. It is unlocked as soon as you meet an opposing empire.

It will trap any opposing fleets. as well as any incoming fleets and ships which enter the system, for its 5 turn duration. These ships can still take actions within the system, including combat, but they can't leave the system or flee from combats that occur there during this time.

It is worth noting this ability carries a cooldown necessitating its careful and calculated use. In addition, others do not appreciate this act being carried out against them and stern diplomatic penalties will be incurred.

Using a network of confidential informants, undercover assets, and cyber intelligence experts, the Cerixx are renowned for the sudden coordinated exposure and capture of rival spies operating within their empire.

Investigation is unlocked by catching someone perform an act of espionage (tech theft) against your empire. Once activated, it allows you to immediately discover and remove any spies operating within your empire. It will then enter a lengthy cooldown while you rebuild your undercover network of assets.

Aside from removing rival spies, it also provides an opportunity to expand your wealth by ransoming these captives back to their respective owners. As their cost is based on their primary skill points, a hefty sum can be made should their empires desire to get their best and brightest back. 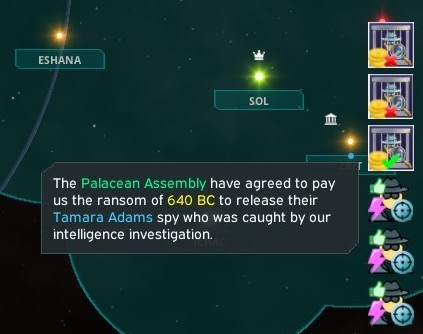 Once found though your investigation, leaders are either returned to their empires if the ransom is paid or returned to the pool of available leaders for others to hire.

The Cerixx reliance on technology and their desire for self-preservation has led them to make frequent use of AI controlled strike craft which can safely keep them at a distance. Their "Executioner" titans have therefore been specially equipped as carriers and provide numerous bonuses to its strike craft.

Command Carrier is a passive ability which must be paired with a Fighter Bay, a Bomber Bay, or ideally both. There is no cost in space for these systems when used on this titan.

This titan's advanced carrier capabilities provide additional health, speed, and resupply benefits to all strike craft such as fighters and bombers that are networked to (launched from) it. Unlike standard strike craft, these ships do not run out of ammo and must only return when new target selection is required.

To eliminate downtime associated with target selection, it is recommended to use this titan's strike craft against larger and harder targets with limited PD and large amounts of armor, structure, and systems that need to be whittled down.

The Cerixx may be the new sheriffs in town, but they aren't the only new faces you'll soon be seeing. If you missed it, check out our previous diary for info on the Palacean.

Interstellar Space: Genesis - Natural Law releases on November 18th. Please be sure to check out our trailer and wishlist the expansion on Steam!