As a seventeen-year-old with a touch for seasickness, young Horatio Hornblower hardly cuts a dash in His Majesty's Navy. Yet from the moment he is ordered to board the Indefatigable, he proves his seafaring mettle on the waves. With a character-forming duel, several chases and some strange tavern encounters, the young Hornblower is soon forged into a formidable man of the sea.


Although Pirates of the Caribbean was originally created as a pirate game, many people like to play it as a historically accurate naval simulation. In our attempts to make the game more realistic and interesting for those players, we have begun work on adding a navy main quest. The choice fell on the character of Horatio Hornblower, who lends himself very well to being put into a game.

At the moment, we have created the beginning of the quest, chronicling Hornblower's assignment to the HMS Indefatigable under Captain Sir Edward Pellew. The player gets little time to get used to his situation as the ship is soon ordered to go into battle with a French battleship. But not before Hornblower meets a rather aggressive and unpleasant fellow midshipman.


As with Jack Sparrow in the previous storyline preview, Horatio Hornblower was not a real person. He was conceived by C.S. Forester in 1937 and went on to become the main character in eleven books, one epic TV movie in 1951 and most recently an eight-part TV series. 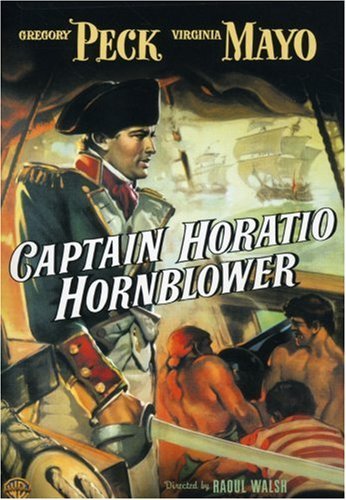 Hornblower joins the British Royal Navy as a midshipman, the lowest rank of officer. He quickly distinguishes himself as being an excellent leader. The most interesting aspect of the character of Hornblower, however, is his personality. Despite all his succes and popularity, he is an unhappy and lonely man who tends to subject himself to merciless self-doubt.

As such, he is a rather unlikely hero, but a very endearing one who has stood the test of time as being one of the best fictional characters in a series of historical
books.

The story has been adjusted for a Caribbean setting, but you will encounter many characters and scenes that you could recognize from the books and movies. Sound clips from the movies have even been included in the dialogs to provide additional immersion.

After serving as midshipman aboard HMS Justinian, Captain Keene tells you that you have been transferred to HMS Indefatigable under Captain Sir Edward Pellew. Captain Keene doesn't appear to like Hornblower very much. 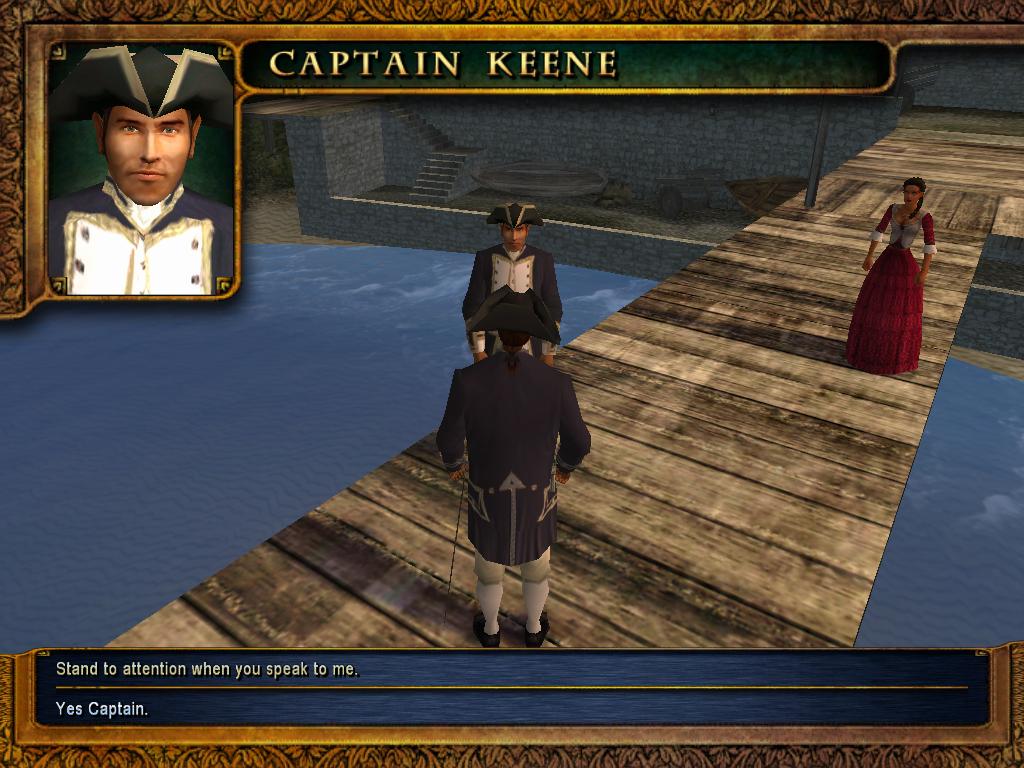 Aboard the ship, you are greeted once more by the senior midshipman: a most friendly character named Jack Simpson. 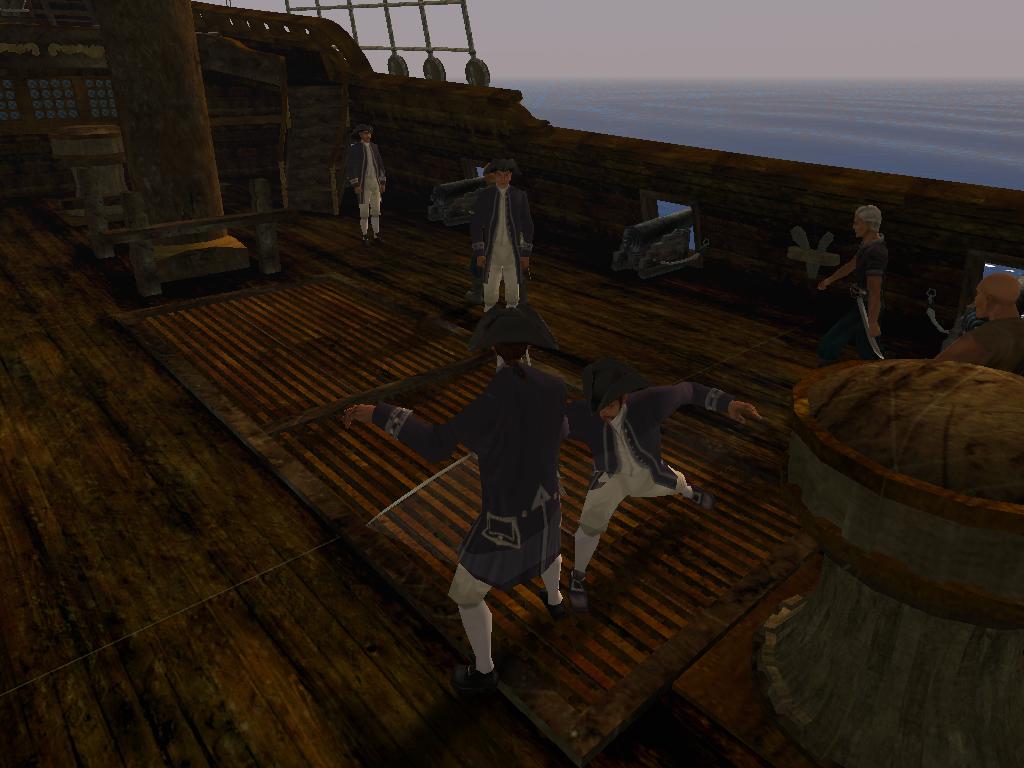 During this quest, you will be waging war on Napoleonic France and will fight for the freedom of the Caribbean islands over the rule of a tyrant. This will mean you will fight many a sea battle, but that is not all. Horatio Hornblower is being joined by a character from another famous series of literature in the form of Bernard Cornwell's Richard Sharpe of the 33rd Foot and eventually the 95th Rifles Regiment. This adds an aspect to this story previously unseen in the game, namely land battles involving riflemen and field cannons.

On the below screenshot, you can part of the worldmap in "New Horizons". The stock game finctional islands have been renamed to their real-life counter-parts and also the toy ships on the worldmap have been replaced. 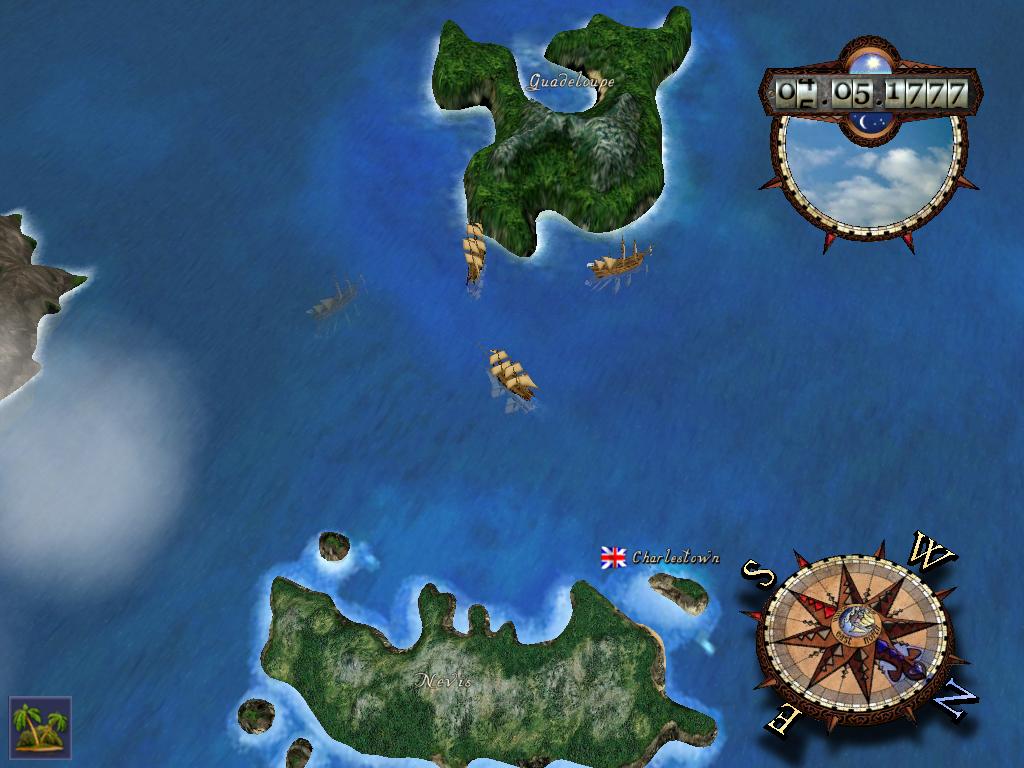 In addition to worldmap sailing mode, there is now Direct Sail. Thanks to this mod, you can now sail from island to island in 3D sailing mode without having to go to the worldmap. Along the way, you will encounter other ships or interesting things drifiting in the water.

This is an oft-requested feature and was thought to be impossible to achieve for the longest of time. But achieve it we did and it appears to be working very well now. In both the Horatio Hornblower and Legend of Jack Sparrow main quests, use of this mod is encouraged and characters will tell you which course to sail to get to your next destination. However, this is not required and you can still use the worldmap whenever you want.

Sounds great, especially the part about free sailing. I also wish my name could be Horatio Hornblower, now.

Can you really sail in this mod (I didn't ever play the game), as to use the wind to your advantage, or does free-sail just imply that you don't have to switch to the overview? Sailing might get me to buy a mod, I wish there were some good sailing games.

In this storyline in the game, your name will be Horatio Hornblower. In real life, I'm afraid we can't help you. You might be able to change it through your local authorities. :-)

The game includes a 3D sailing mode in which you can sail around and do battle. There are two sailing modes: arcade and realistic. Especially in realistic sailing mode, you should be able to take advantage of the wind.

We originally had an unsophisticated weather change mod that completely randomized the weather every hour to give the impression of the weather changing. However, any advantage you might've gotten at that point would be lost in the randomization.

Thankfully we have been able to rewrite that code, so the weather does still change, but only bit by bit. So any advantage gained will not suddenly disappear and any disadvantage received is not going to magically solve itself.

Wow, sounds great! I might get Pirates just for the mod :) Have to check the pricing. Is it online play, too?
Your next mod will be for virtual skipper, I'm sure! Remember: good food will give good wind! Always.

The game is single player offline play only, unfortunately.
BTW: I won't be modding Virtual Skipper. But I DID make several ship models for Virtual SAILOR many years ago.

Awesome, loved the books and the TV series. Keep up the good work.

I love the books and TV series too. And the old movie as well. If ever you have the chance, I can highly recommend that one. The screenplay was even written by C.S. Forester himself!

the last build had massive performance issues, I hope they've been fixed as I was really looking forward to those new quests- hopefully all is good now. I can't wait till you guys release the final version, this is truly one of my most favorite games- I'm so happy to see you guys using ModDB regularly- great effort.

The main performance issue I am aware of was bad lag upon firing your ship's cannons. This has been traced to the rewritten sound system, which didn't perform very well in such cases where dozens of sounds had to be played almost instantly. We have found a temporary(?) fix for this which is included in Patch 2 which skips a lot of the code in those instances, making for much better performance.

Alpha 9 should have a lot better performance and there's dozens of bugfixes in there since Alpha 8. It promises to be the most stable Alpha since Alpha 6, released around two years ago now.

Despite our good progress though, I don't really expect us to be able to release the final Build 14 within a year or so. There's still lots to do. But Alpha 9 should at least be pretty playable.

Any reports on bugs would be most welcome in our forums at Forum.piratesahoy.net ;-)

and on the world map is it acurate like the british channel and portsmounth and the french coast. does he ever sail as far as the indies?

do you know were you can buy this game? I cant find it on steam and the only other place is pirates bay and i dont trust that site.... i found a copy on ebay but i want to download it to my computer its quicker im a huge horatio and master and commander fan and this mod looks great! thanks