Welcome to the first Gamedesign feature here on ModDB! This time I want to give you an insight about how we developed our storyline for openOutcast and what the needed steps are to turn a written storyline into a game. And there is one thing I can tell you about it right away – It’s NOT just about copy & paste...

Welcome to the first Gamedesign feature here on ModDB! This time I want to give you an insight about how we developed our storyline for openOutcast and what the needed steps are to turn a written storyline into a game. And there is one thing I can tell you about it right away – It’s NOT just about copy & paste...

We started to create our backstory for openOutcast some months ago. We already had a baseline from the last few years but this was rather unorganized and chaotic in many ways, so what did we do? We launched a so called story contest, built two groups and told those groups to develop a new story for openOutcast. Either from scratch or based on the old baseline. The only restrictions were:

The rest was completely freestyle. The two teams started their work in May and worked through the whole June and in the end of June we had our final story decision meeting. The two proposals were REALLY different in the end, which was great. One was completely freestyle and new and the other one was mostly based on the old baseline but evolved and detailed it in a really cool level. I am not going to tell you which one was winning

Alright, so as we had the story decided, we had that huge almost 40-paged-text-monster of storyline with character descriptions, location descriptions and with – of course – the main storyline divided up into 4 acts. Now what to do with that? Just copy & paste it into a list and derive a few quests from it? Na, not really…

First of all we needed to get an overview about WHAT happens WHEN and WHO is doing that. The best way to do this, was to split up the storyline into the smallest pieces possible. We took each important action of the storyline, categorized it (Is it a cutscene, is it an action of Cutter, is it an information, is it an action that is happening without Cutter’s notice etc.) and put it together into first raw main quest lines.

To show you how this worked, please see the example below.
First, the written part of the storyline:

So far not useable as a storyboard for a questline, right? It’s only text and you don’t know what exactly is useable and what is just information for the player. So we needed to split it up a bit more and categorize the elements. This brought us to the following kind of list (which we created with the application XMind by the way):

This is now perfectly useable because here you see the quest itself (the red board), the actions that are happening (the clocks) and the conversations (the two-people-symbols). This helps a lot to get an overview on how many quests there are, how many game-actions are in there and how many conversations we need to write.

In the end, this was done for all of the four acts that we have in the openOutcast storyline. In total, there are over 550 different nodes for the whole story. Quests, conversations, actions and fights…this sounds like a whole lot of stuff to do, right? It certainly is, but it gets even more interesting when you take into account, that we aren’t on the highest possible level of detail!

To give you an example: One of the above listed conversations probably consists out of 10 lines of text and 5 different camera views. Maybe this quest above needs 20 lines of script logic and needs two more conversations to be done. And after such a conversation is written up and developed in text form, it needs to be prepared for localization and converted into “real” ingame dialogues. For this purpose, we are using a specifically created dialogue editor where we write and setup the dialogue scripts useable by our own dialogue script system. Stuff like “start/end quests”, “if-then-logic”, “cameramodes”, etc. 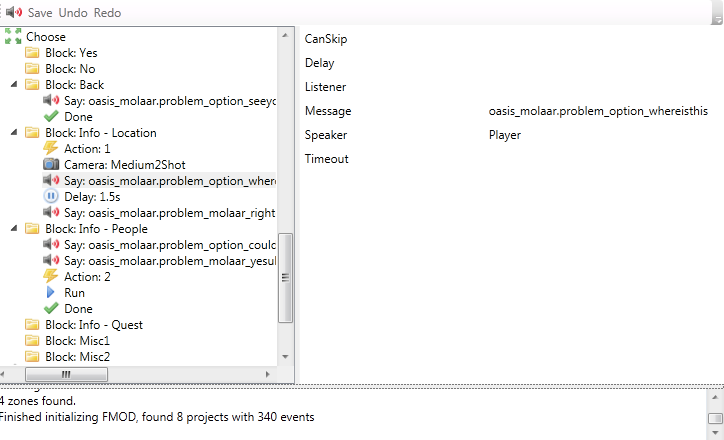 Maybe you could give us some voice acting preview? ;)

Good luck with this mod!

@phunkrazy: see our video section for some impressions of the dialogue system :)