An introduction into the mod "Far Cry 2: Reloaded" and the future development of "Vetron's FC2 Editor Mod".

L ast week I posted V1.1 of Vetron's Editor mod, which is a significant improvement over the previous release. Not only does it contain various fixes, but it also adds new features and content unique to this mod. In this feature I will discussing the future development of this mod and an upcoming mod named Far Cry 2: Reloaded.

In this release I fixed the annoying bug of text strings not showing up correctly. In the above screenshot you can see that all the assets and menu items are now labeled correctly, plus featuring some revisals to the categories that assets are stored in. A significant improvement is that items such as vehicles and multiplayer items are now ordered in sub-categories by what faction (team), they are relevant too - such as APR, Neutral or UFLL.

On the far left of the above screenshot you'll also note the wilderness selection window (a window that lets you choose a pre-made map template) now features several new options, plus the addition of both savannah and woodland specific settings (rather than a random one or the other selection). 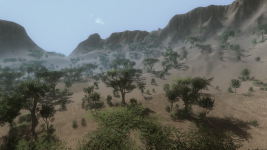 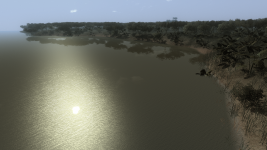 Currently I'm looking into getting weapons in the editor properly, I want the weapons to feature respawn times similar to items such as vehicles and the ammo boxes. The point being that they will actually respawn but not immediately like other mod's.

I also want to continue to improve the wilderness terrain templates by adding a number of extra options. First off is an option to disable collections (i.e. tree's) from being included in the template, so for example you could just pick a waterside template with just grass. The fact that maps are filled with tree's entirely is at least one reason this feature isn't always used by mappers. I also want to develop more interesting map templates - such as island jungles (Far Cry 1 syle etc.).

I will also be adding more assets as and when I have them fully tested, rather than just filling the editor with pointless stuff. I'm open for suggestions on what to add or how to improve things. 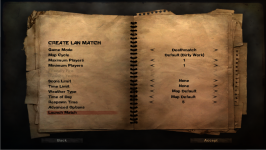 This an enhancement mod that focuses primary on the elements that contribute to multiplayer, from map creation to game setup to gameplay. It consists of several smaller mod's developed by me over the years that effect different aspects of the game. Here are descriptions on a couple of them...

This is known as "Vetrons Advanced MP" mod and focuses on giving more options for multiplayer games, whether its adding respawn time changing for deathmatch or adding more score or time limits.

Vetron's Loadout Mod affects the loadout and progressional system of online multiplayer. For starters it removes all restrictions and weapon unlocks, instead replacing them with weapon upgrades. For instance you could pick an AR-16 right away, but by purchasing upgrades (that would typically be where you unlock weapons) you can gain the option to carry more ammo etc. Other changes include letting you pick either grenade type as well as any secondary weapon you want.

The good thing about these changes is that you can play with the progressional system enabled, whilst having all the typically high rank weapons instantly unlocked. Personally I always thought the weapon unlocks were just silly.

When will this release?

No definite date as of yet, but if testing goes to plan then it will be in the next couple of weeks.
In the mean time please give any constructive feedback you have, I can I always improve the mod where necessary.