Encounters in Final Fantasy Tactics: Rebirth have seen significant changes from the vanilla game. Many storyline encounters feature more enemies or upgraded "mini-bosses." There are more epic random encounters similar to 11 Monks on Grog Hill and they are more frequent. Additionally the Deep Dungeon has been completely redone. Every encounter should be familiar in feel but with added new twists. 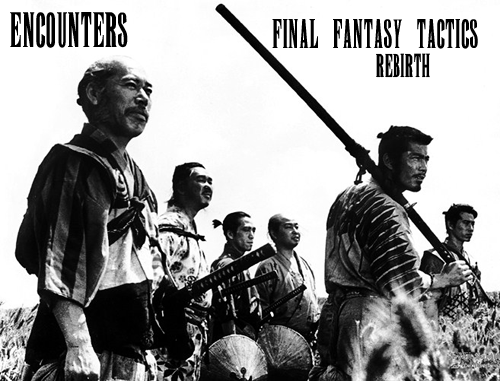 There have been a large amount of new and updated encounter to FFT: Rebirth. First off you will notice that most storyline battles feature either more enemies or one of the enemies has been upgraded to sort of a mini-boss. Generally these mini-bosses will have slightly upgraded equipment and pre-selected ability combinations. Here is an example from the Sand Rat Cellar sequence: 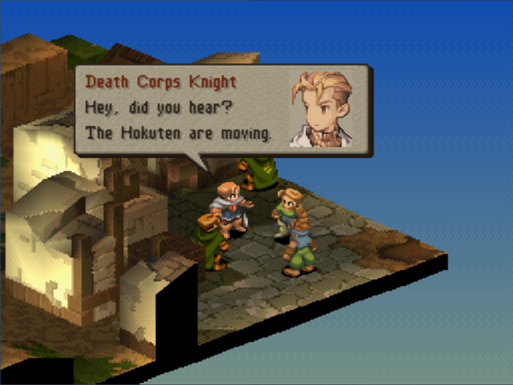 Hmm, this Knight looks a little different than I remember. 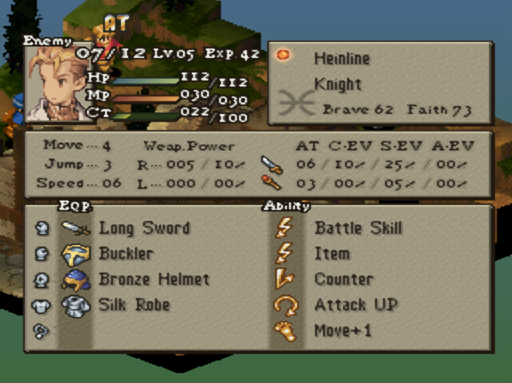 Aha! I see he has Attack Up, Counter, and Move +1. He could be handful at level 3! Make sure you check any enemy who has a slightly different appearance than you remember. Chances are that he has been modified or upgraded to some extent. In random battles such as Mandalia Plains and Sweegy Woods expect to see some completely epic encounters. These encounters were inspired by the 11 Monk throwdown that happens on Grog Hill in the original game. Our thought was that players already familiar with FFT would enjoy more of these types of encounters. These epic encounters will occur 40% of the time when approaching an area from the correct direction. For instance, if you approach Mandalia plains from the South you get the following battle 40% of the time.

I'm still a little bitter about this battle. Other epic encounters include the Seven Samurai, Seven Worker Sevens, 11 Great Marlboros, a party of gunslinging Chemists. Some of these are in the Deep Dungeon but every place where you can fight random encounters has one of these epic encounters. Fighting them generally gives you epic end game equipment also.

So, how does it work ? Do you play it on an emulator and patch it beforehand ?

On the official site it says:

"2. What do I need to play FFT: Rebirth?
A. You will need an emulator and the ROM file to play the modification. Emulators such as ePSXe are the most commonly used. Simply start up your emulator and load up the FFT: Rebirth ROM and you will be good to go!"

"1. How much does FFT: Rebirth cost?
A. FFT: Rebirth is 100% free. The only requirement to download the mod is that you must have a copy of the original Final Fantasy Tactics for either PSOne, PSP, or PSN (Playstation Network)."

So if I get it right you dont actually need the original as you don't patch the modifications into the actual maingame? Wouldn't that make it illegal? Of course you say they must have it but how do you wan't to verify that?

Please correct me if I'm wrong

We actually had to switch to PPF in order to save bandwidth. Additionally this means the distribution contains 0% copyrighted material - meaning the modification won't be shut down by Square Enix, like Crimson Echoes.

Aha. Another FF mod called 'Rebirth', doing, well, the same as mine does for Final Fantasy VII.

At any rate, I'm very much interested in this mod, and I hope you'll feel likewise towards FF7: Rebirth, too.