Rediscovering Diablo 2 again? Have a look at some of the best mods in existence for the game.

With the recent announcement of Diablo 3, many have taken it upon themselves to jump back into the Diablo universe. Diablo 2 has shot up back into the top ten list here at ModDB and you'd be hard pressed to find a copy of the Diablo Battlechest at your local video game store. Gamers all over the world are dusting off their copies of previous games in the series to experience the nostalgia of playing one of the most classic and revered titles ever. However, it's no secret that release of Diablo 3 is still a long ways off. To help ease the pain, we've compiled a short list of essential mods for every Diablo 2 player. Be sure to check these great mods out in-between your bouts of salivating at Diablo 3 media.

If you only get one mod for Diablo 2, Median is the mod you want to get.

Median wrote: The main attraction of Median 2008 is the brand new skill trees, 30 skills per class, providing a whole new experience. The mod also offers a new base item setup with 6 quality tiers, 430 uniques, 490 runewords, a new affix pool and gem/jewel stats, and many new and powerful crafting recipes.
All this would be for nothing without the monster AI modifications and new attacks and abilities to make them more dangerous, and for advanced players there are 18+1 new uberquests; the attribute challenges, which reward those who invest only half of their stat points with shiny items; and the level challenges, which require you to complete difficult tasks at a low character level. 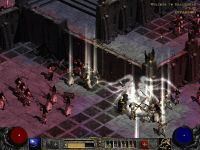 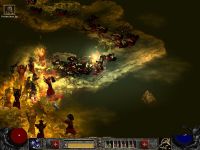 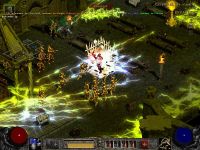 Not satisfied with the difficulty levels of the "vanilla" Diablo 2? Zy-El's the mod for you:

Zy-El: wrote: I made this Mod to play the game the way I like to play Diablo. I've played other Mods and found most to be over-powered and too easy. The Zy-El Mod has a lot of changes, but I've tried to balance the changes to make a challenging and playable game.
Collecting gold still matters (unlike Battlenet). Your character still needs to carry potions because they still matter. The story's still the same so everyone knows what the game is about. And the character classes are still the same although the skills have been rebalanced along with the monsters.
One of the most significant elements in the Mod is the ability to craft your own items through Cube recipes. Using the various items available in the game, you can create items to suit whatever need or playing style you prefer. If you can't find the magic item you're looking for, you can craft it instead. You just have to find the ingredients. 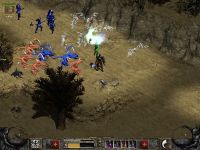 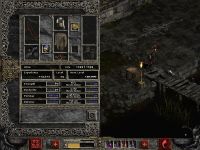 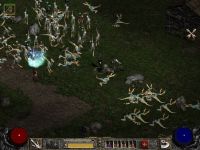 A regularly updated mod that also increases difficulty in addition to adding new areas, monsters, and runewords system. Particularly focused on the addition of many new cube recipes. 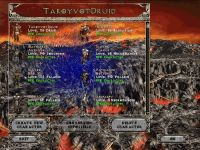 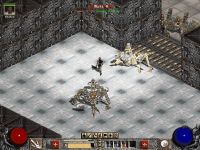 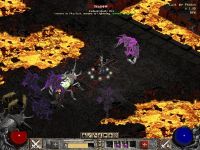 THE HORDES OF CHAOS

A total conversion mod that follows a unique storyline and features a whole list of changes.

Darque wrote: ACT I - The Goblin Armies
An army of goblinkind is amassing. You must blaze a trail through the throngs of monsters and find the warlords (Nah'Zul, Jehzerael, and Gruumsh) and destroy them before the goblin army marches upon civilization.
ACT II - The Wasteland
After taking out the warlords you find that the warlords have a master that brought them to power. You travel east to find this master. On the way there you find yourself in the city of Astalard. Many raids have recently taken place on the city and its visitors. You must find this group of attackers and bring them to justice before you can proceed east through the mountains.
ACT III - The Dark Forests
You have followed the trail of this Dark Master east to Spelwood Forest. Speaking with various civilians at the edge of the forest you find that the Dark Master is indeed the drow queen Durhanna. Find your way throught Spelwood Forest and find the entrance to the Underdark city of the drow.
ACT IV - Underdark
You have found your way to the Underdark, but now must search for city of the drow. Now find your way to the city to find the Mistress of Chaos, Durhanna.
ACT V - Siege
You have found and killed Durhanna, but her top general, Bursantas has already marched his army upon Firewindle Gate. You go to Firewindle Gate and go find the Lord of Chaos. 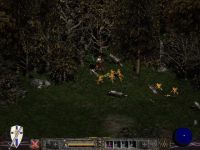 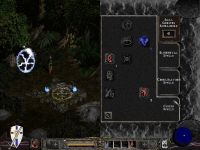 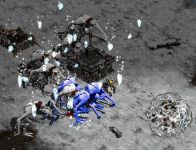 Ever wanted to play the first Diablo, only with all the greatness of the second? Back to Hellfire does just that and adds some new features into the mix as well.

BacktoHellfire wrote: This is a modification for Diablo II Lord of Destruction 1.10. It focuses on re-creating the feel and the atmosphere of Diablo and it's expansion Hellfire while keeping some features from the sequel. Those are features that improve the gameplay in my opinion - arrows, boss graphics, mercenaries to name a few. Don't expect to get a full re-creation of Diablo and Hellfire in the mod - it's very different yet still close to them. Back to Hellfire has a different storyline to suit the bigger level environment scattered in the five acts. For example, you will find the Nest in the town of Lut Gholein, and not in Tristram. I can't limit Back to Hellfire to one act. Even if I could, I wouldn't do it, I love variation. I think this brings more fun in the gameplay. 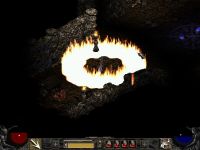 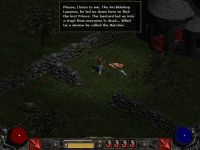 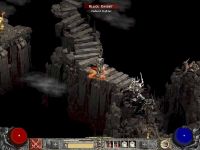 These are only mods that are listed on ModDB. If you know of any other ones, tell the creators to list on ModDB or create a profile for them yourself. PM me and I'll add the mod to the list!

All of these mods look hella cool, but are they only available to use offline. Doesn't battlenet prohibit hacks? Just curious... I seriously want to load some of these, but don't want to get my account cancelled. Are there other servers than Battlenet? Thanks for any info.

They should be fine as long as you use it with someone who has the same exact version of the mod.

wow, this is pretty convienient, I just randomly reinstalled this game two nights ago.

gahh makes me wish i had diablo 2

a friend told me there is something like a "mod" that enables a higher resolution. is that true?

yes it is true, google it

Median 2008 deserves the love. That's why I personally saw to it that the mod be rewarded Honorable Mention in the Old Skool category during modDB Editor's Choice 2006!

Check out the Valhalla and Eastern Sun mods:
Eastern sun is the one I'm currently playing, it retools a lot of the skills and items: Homepage3.nifty.com
I've currently got a level 77 Katana assassin on this mod, which is an interesting change from the dual claw-class weapons.

Valhalla is a pretty crazy mod, it raises the level cap to 300 and adds heaps and heaps of new items, along with changing many skills: Afterlife.ws

If it's Valhalla a pretty crazy mod then you haven't met Zy-El. This mod gives you the chance to feel what is like to fight in really difficult levels and you can reach level up to 10000!!!!! Check it for yourself if you don't believe me. A thousand runes can be found, a lot of gems, special weapons, you can create your own special weapons e.t.c. You can even reach your skills up to 100.

ahhh i wish i could play d2 again, but my dvd drive buggered up. i think its a hardware problem - and I'm not sure how to fix it.. or if getting a new dvd drive is necessary (if that is the case, I might as well get a new laptop/desktop). In any case.. I miss D2 and those mods look delicious :(

Setis, if you register your D2 cd-key at blizzard-store online, you can download D2 for free :)

Yo Setis just ask a friend to create an image of the game it is portable that way you dont need to install the game.Good luck P.S. you will need a portable drive to transfer the image since ur drive is on the fritz

I strongly recommend anyone interested in mods for D2 and LOD to go to the PhrozenKeep at Phrozenkeep.planetdiablo.gamespy.com

As of late, I've really enjoyed playing the mod "Eastern Sun." The exciting thing is that there are tournaments you can participate in year-round. There are Major tourneys every 5 months and Mini-tournaments every 8 weeks. Come over to the Keep and check everything out!

Just making a note that the phrozen keep has moved to D2mods.info

FYI, the new update for Diablo 2 is version 1.11b, so the last mod listed *might* not work with updated versions.

a 70 sorcoress with full tal rasha????????well,it's nice having people giving u stuff.i've got 92 assassin,92 amazon,72 barbarian,82 necromancer(d2)
median:120(paladin ,necromancer ,amazon,assassin, barbarian)
but recently i just had an idea playing median hardcore without back up files.my save game has turned into a cemetry but it's diablo after all.it's fun.

Try Nez mod if your looking for something with a lot of new items, and new pvp aspects.
realm is hosted on d2maniacs (google it)
download it also on the nez mod thread.

how do u mod diablo 2? i have tryed everything!
mpq editor, hexeditor...nothing have worked

Back to Hellfire Diablo II: Lord of Destruction

The Hordes of Chaos Diablo II