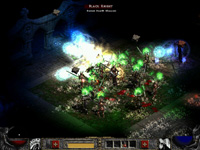 The main attraction of Median XL is the brand new skill trees, 30 skills per class, providing a whole new experience. The mod also offers a new base item setup with 7 quality tiers, 480 uniques, 310 runewords, a new affix pool and gem/jewel stats, honorific items and many new and powerful crafting recipes.

All this would be for nothing without the monster AI modifications and new abilities, elite and heroic monsters with even more powerful skills, and for advanced players there are 30 new uberquests based on Diablo lore and the challenges, which reward you for killing bosses at a low level or two of them at once.

A bullet list of all changes would take up most allowed space in this description, so please consult the official site.

The 210 new skills (25+5 per class) give rise to very different build strategies. Ever wanted to build a throw barb, poison sorceress or bloodwitch amazon?

What would new skills be without new monsters to pulverise? The focus here is on AI and skill changes. From hammer-throwing clerics and quill rats with homing spikes to corpse exploding goatman priests and frogs that turn into a prince when killed, the new monsters are more than a match for the new skill set. There are a few brand new monsters here and there too - fear the mushroom people.

Elite monsters
Much more powerful than regular monsters and with new and improved skills, these rare encounters send you running for the hills.
Heroic monsters
Even more powerful than elites, these are thankfully restricted to their own special dungeons... mostly.
Veteran monsters
Rare and very powerful, you gain a reward for killing all of them...

These are special dungeons, levels or player-summoned bosses that should only be attempted by the skilled and powerful. Median XL offers 17+1 uberbosses, 8 uberlevels and 4 separate bosses, most based on Diablo lore. The uberquests range from the invasion of Toraja by the edyrem to the cursed city of Ureh (from the Diablo novel 'Kingdom of Shadow') and an uberquest that recreates the capture of Baal by Tal Rasha and the Horadrim... with you as Baal.

Completing difficult tasks and encounters at a low level or performing tricks like dodging witches or shattering stained glass windows may earn you big rewards... from powerful charms to additional new skills.

While some people play the game to defeat the denizens of Hell (haha), for most others TEH L00T and the bragging rights that come with it are more important. Median XL does away with normal, exceptional and elite items, instead providing six 'tiers' of item quality. Baal may drop a cap, but it will be a cap with 600 defense on it. Median XL also features many new class-specific items to augment the new skills, from necromantic crossbows to the assassin naginata with a built-in multitarget sweep attack. A huge collection of new uniques, sets and runewords is a given, of course, as well as some much more powerful crafting recipes.

Due to the failure of Forumer, the official forum has died in 2012 after five years of faithful service. In its place is a third party forum here! And yes, it's still pretty active (05.nov.2013) and is also home to the Ultimative line of third party Median XL patches in case you can't get enough of it. Median never dies!

What are you waiting for? Download it now!
Download location
The Desura link below this line is a standard ModDB banner and does not seem able to actually provide the mod.


Enjoy Median XL and many other great mods on Desura.

Will this conflict with Diablo 2: Is alive mod???

That feeling when Median XL didn't even make top 100 this year. What the hell.

can anyone help me . my nevromancer doesn't fit any of the necromancer helmets zombie head unravaled head,perserved head...i cover all the requierments but it says impossible to put it on?what could it be the problem?

Unraveller head, zombie head, all that are shields, you know.
How do you even go about breathing?

Voted for you guys. Good luck!!