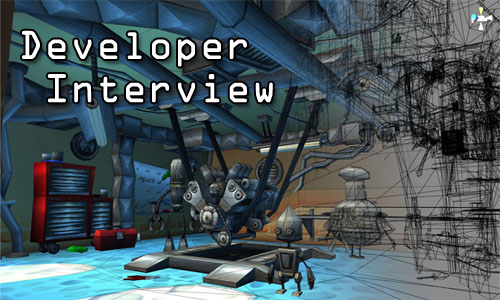 1. Who are you and what is your role at Exit Strategy Entertainment?

My name is Soenke Seidel. People call me "warby" and I like to think of myself as a sort of "creative director" which really translates to "the guy that makes everything". Asset production and setup of interactivity is what I enjoy doing the most and I get to do plenty of that here!

2. What is your game development background? When did you start developing games and what projects have you worked on before "Pirates of New Horizons"?

It must have been 1998 when I got my first pc and with it I got a game called "half-life", which in turn came with a tool called worldcraft. I spent a couple of years modding for half life and my mods and custom maps were getting noticed by variouse game developers who started offering me full time jobs ... which I couldn't resist.

My first full retail game was a horrible experience. It was at a german developer, a first person shooter called "psychotoxic". Just about everything that could go wrong during the development of a game did! Just to keep myself sane I had a little 2d flash jump and run game project on the site called "codename gordon". It was inspired by the half life 2 videos that got released /teased at the time and was a very risiky affair ip-wise. We sent a playable build of the game to valve before the release and they liked it so much they decided to release it via steam to promote Half Life 2. Note that this was at a time where there were no games on Steam but Valve's if I remember corectly.

Psychotoxic got released to horrible review scores and sales but codename gordon I considered a small hit! Over a million people downloaded it in the first week (no doubt due to the popularity of the Half-Life brand). It was apparent to me that psychotoxic would not generate enuagh money to make a second game so i knew it was time to move onto my next gig which was in the United States at a young startup company called windwardmark interactive or wmi how everbody called it. They were making a realistic first person shooter called "alliance" that was ridiculously ambitious in scale.

Unfortunately my visa only expired and I had to return to Europe. I joined IO Interactive in Denmark and was assigned to make dlc multiplayer maps for kane and lynch's mp mode called "fragile alliance" (probbaly becasue of my counter strike and day of defeat background...). I was secretly hoping to be working on a new hitman or maybe a freedom fighters sequel ?! But you dont always get what you want! So I did dlc maps for fragile alliance and then went right on working on fragile alliance 2 which will come bundled with kane and lynch 2 this august ! *fingers crossed for better review scores* The depressive mood at the studio once again drove me into having my own side project ...this game ! I have been very unlucky with all the retail games that i got to work on. They either sold poorly, got reviewed poorly ( not my fault ^^ ) or got canned so overall the experience of me making games at home has always been more enjoyable to me!

3. What sparked the idea to create a game about a pirate girl in space? Where do you draw your inspiration from?

The game was kicked into being by me and another German level designer called Thomas Hess with whom i frequently played Day of Defeat! He constantly raved about a jump and run game that "I HAD TO PLAY" called psychonauts ! So i bought it on pc, it was the last copy at the store. I consumed it practically in one sitting and jumped on the rave bandwagon! Thomas and I discussed on skype how it could be that there are not more games like psychonauts and that the whole 3d jump and run game genre has been on a steady decline.

So what do you do when you think there is not enough games of a certain type? You make 'em yourself! Hessi wanted the game to be pirate themed while I insisted that i don't want to make a game that is bound by "realism". I have always been a fan of the half life franchise becasue it's pretty much 90% realistic but has that sci-fi edge that allows them to do whatever they want. You want to teleport? Sure you can do that! Do you want to have alien enemys? Sure! An organic weapon that shoots bees around corners? Totally! In the hl universe anything goes and nothing has to be rationalized beyond "its alien tech". So hessi wanted pirates, I wanted sci-fi! That you play a little orphan girl called annha was his idea (and yes it's Annha not Anna or Annah!). I only designed the looks of her!

4. Tell us about the main character of the game-the young pirate
"Annha"! What's her story?

Well Hessi left the project soon after kicking it into being because of his university exams and girlfriend troubles that demanded all his time! So he never fleshed out the backstory of the character; the age and name was all I had to go by. Skjalg our lead coder who joined the team much later developed the backstory of the character more togther with me. Aparrently he is an avid reader of fantasy literature ... and certainly opinionated how one has to develop characters and
construct a dramatic story arcs, so little Annhas backstory ties closely to the overarchign storyline we have planned out but i dont want to spoil any of that yet. We are savoring that for the full game! The only piece of backstory you will get in the prototype is how Annha became a pirate and how she got her own ship ... I am not gonna go into any more detail than that here ! :)

5.Why did you choose Unity as middleware to develop the game? What other software applications do you use to create the assets?

There is actually one or two years between me and Hessi deciding to make a 3d jump and run game. At the beginning of the actual development we were considering to use "Ogre" like "Zero
Gear" does, which we were very impressed with at the time. They dropfed us media from time to time and it always blew our minds! But Ogre comes with no tools whatsoever so we looked for other options; using unreal or source would have meant that we probably couldn't sell the game becasue we would technicaly just be making a mod. I have been triying many obscure free engines over those years until Unity came along and with its ease of use and tight design instantly won me over! As far as the other tools go: photoshop etc. (the usual suspects ^^). Another great thing about Unity is that it can pretty much natively import from any 3d app! So yeah if you are looking for an easy to use 3D engine to make your games in look no further than Unity!

6. What is it that you like about being an indie game developer and indie games in general?

What I like the most is probably having complete creative control. Also there are way less compromises you have to make and no committee decisions unless you want that! In general it never ceases to amaze me what awesome games you can make with such tight resources. For example cavestory impresses me more than gears of war 1 and 2 combined!

7. Have you ever suffered from scurvy caused by sustaining yourself only from pizza over long periods of time?

If you are triying to paint the sterotype fat pimpled nerd image of me - I must dissapoint you, I do alot of excersice and I am very concious of the quality and healthyness of my food! I really need this because I rarely work less than 14-16 hours a day !

Yeah I want to specifically shout out to my 3 coder friends Skjalg, Zacker and Samb! Even though I love to brag about how I am the only guy working on this and IT'S ALL ME and stuff, the truth is: without the scripts from those 3 guys there would be NOTHING in this game right now! I am completely mentally handicapped when it comes to programming! So yeah ... YOU GUYS ROCK!

That be it for today scallywags! Arrr, more tales about t' sweet trade of working on "Pirates of the New Horizons" comin' soon when Cap'n Frie returns!