Take a look at the thought process and iterative workflow that went into creating our cast of main characters, the Orb Warriors, from concept to finished game asset!

Hello, and welcome to our second Dev Log! Today I would like to talk to you about character design. And not just any characters. No, we're taking a look at the Orb Warriors themselves. Oh yeah, I'm talking titular heroes here.

So how and why did they happen? Well. During the planning phases of the game, before development even really started we had the idea of making our playable characters robots. That is because robots bring a few advantages with them when creating characters with limited time and budget:

Since there is no preconceived definition of "robot anatomy", bots can take any shape and form you like. They can also function however you like, as long you can make it seem believable within the word you're building. In that sense, hi-tech is almost like magic. 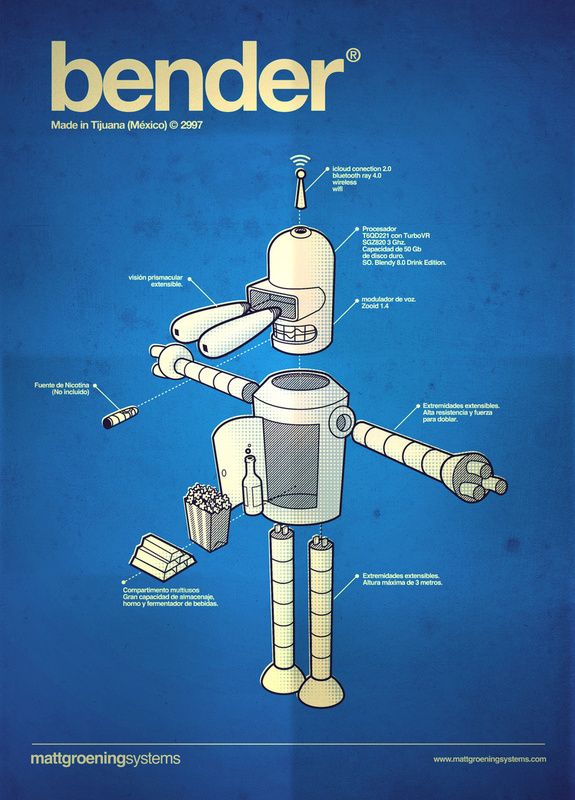 See what I mean?

So our first, very early prototypes looked something like what you see below. The bots consisted of a head, a torso, a pair of floating Rayman hands and a big ball instead of feet. The thought process behind that was, that 1) it would save time animating them and 2) BB-8 was kind of really cute. The sequels are still bad though, fight me. 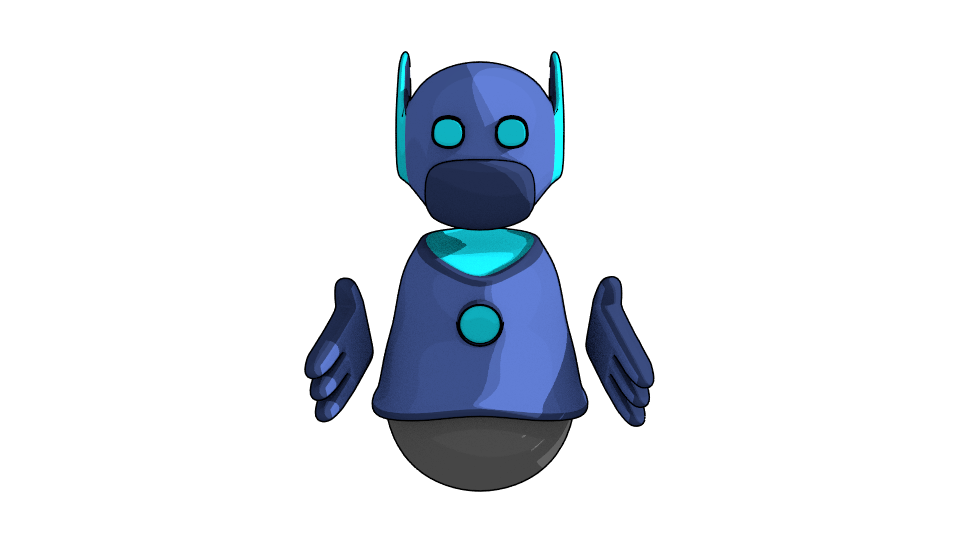 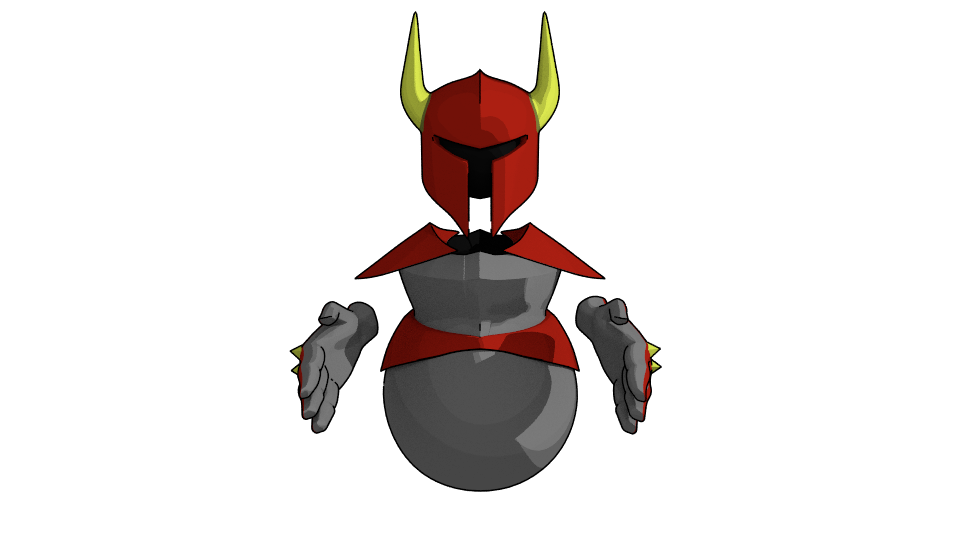 The bots were cute in their own, cartoon-ish kind of way, but they also had a couple of issues: From the camera perspective we wanted to have for the game, the big torsos covered most of the ball, and the big head-to-body ratio made it so that most of what you saw was the relatively featureless top of their heads. In other words, the characters didn't read in game.

So we went back to the drawing board. We liked the robot concept and we still liked the rolling ball instead of legs, both because of the ease of animation as well as the association with what was to be their main weapon, the Orbs. Despite that, we kept an open mind and tried out all kinds of shapes and forms as you can see below: 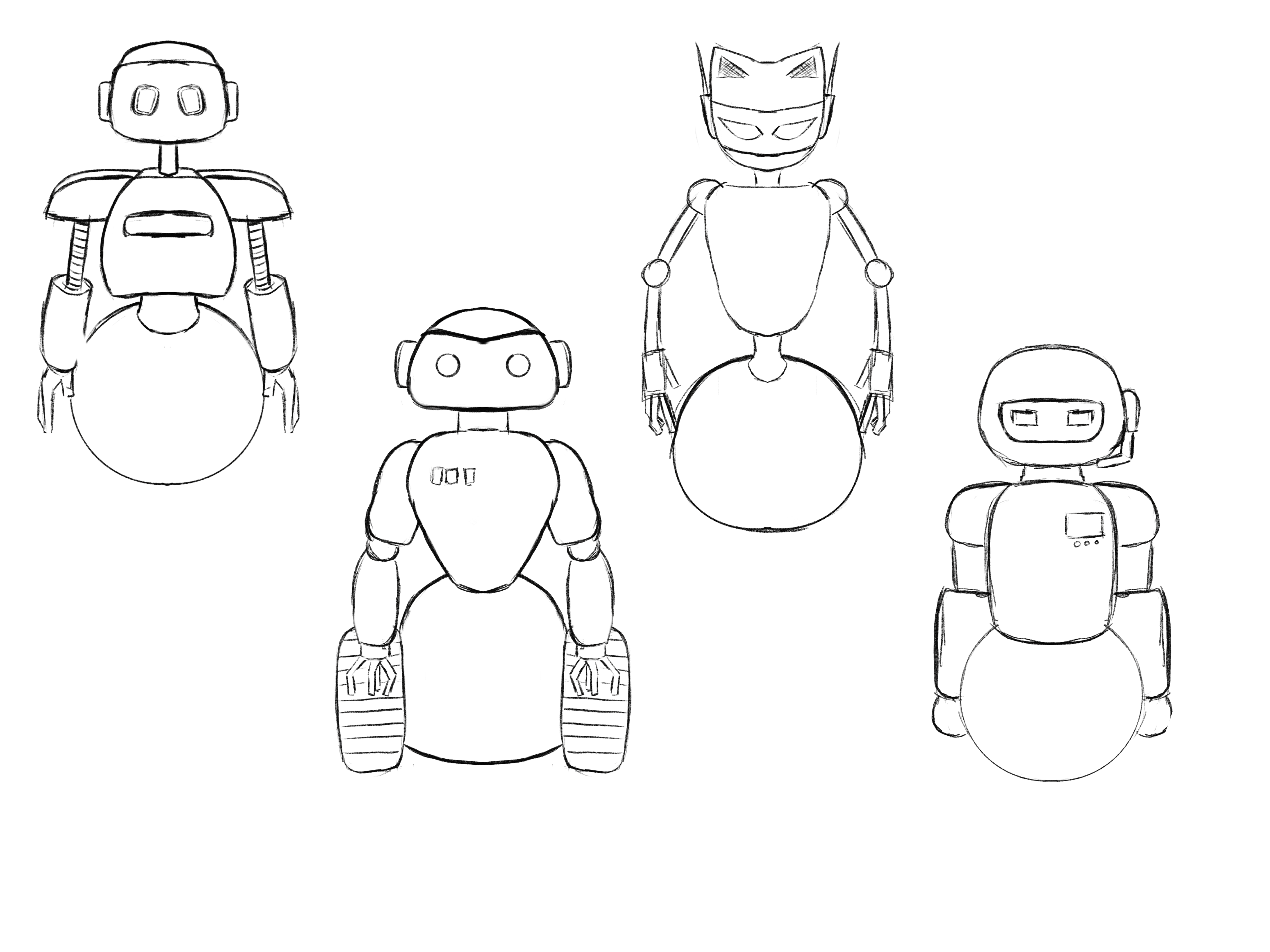 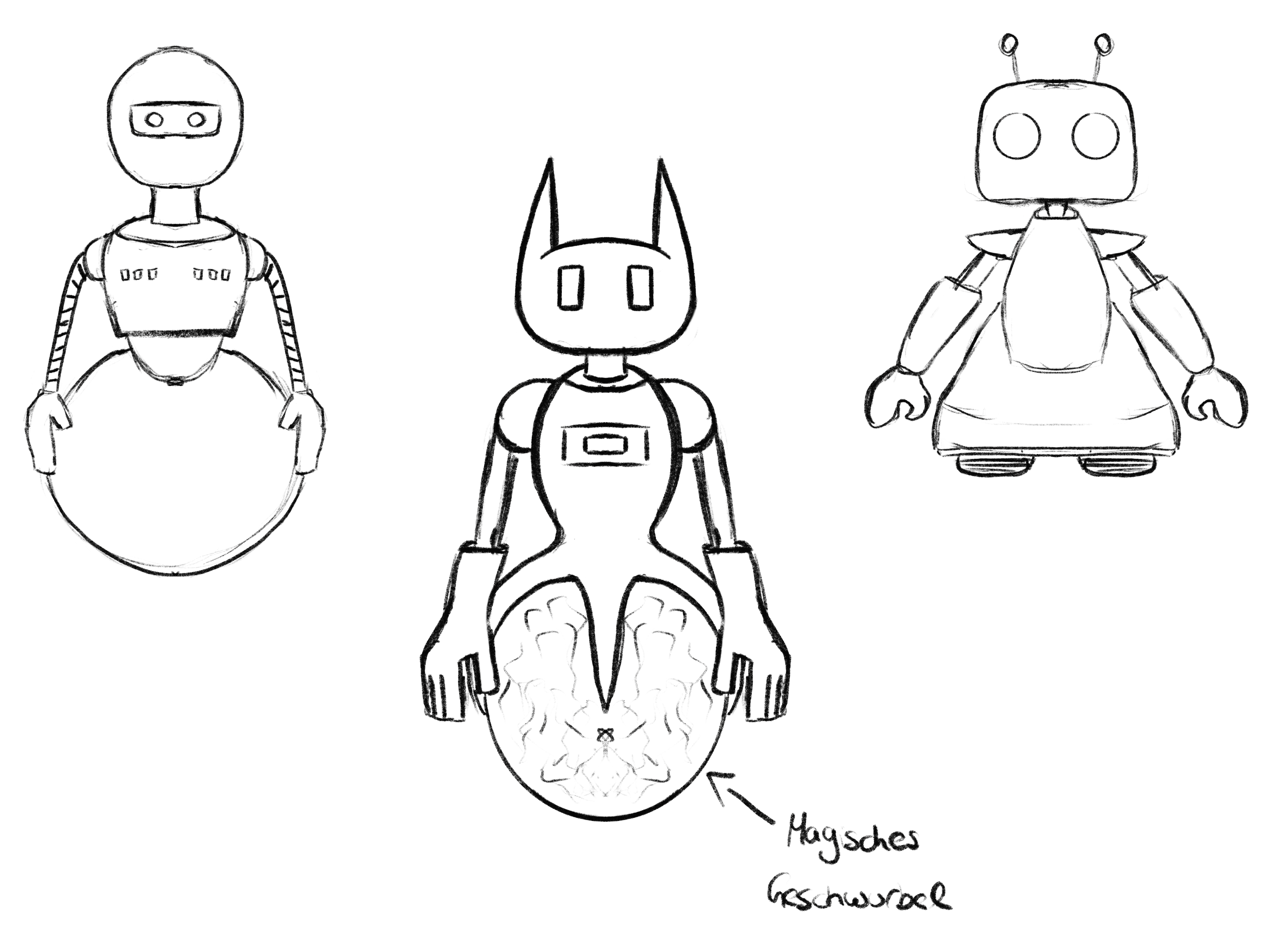 In the end we decided to stick with the ball though, and we started focusing our work into refining that shape. Oh and we also gave them proper arms instead of the floating Rayman hands. Another thing that happened simultaneously was our decision to flesh out the cooperative aspect of the game with a campaign that told a story of 4 players working together against the baddies.

This instantly helped in finding a visual direction to take us in, as the robots now had a clear identity: They were the Orb Warriors. A group of robotic justice fighters, that were actually toys brought to life by a young childs imagination. Immediately we had lots of inspiration to draw from, mainly the heroes of our childhood, ranging from the Transformers and the Power Rangers to the Ninja Turtles or the Powerpuff Girls. 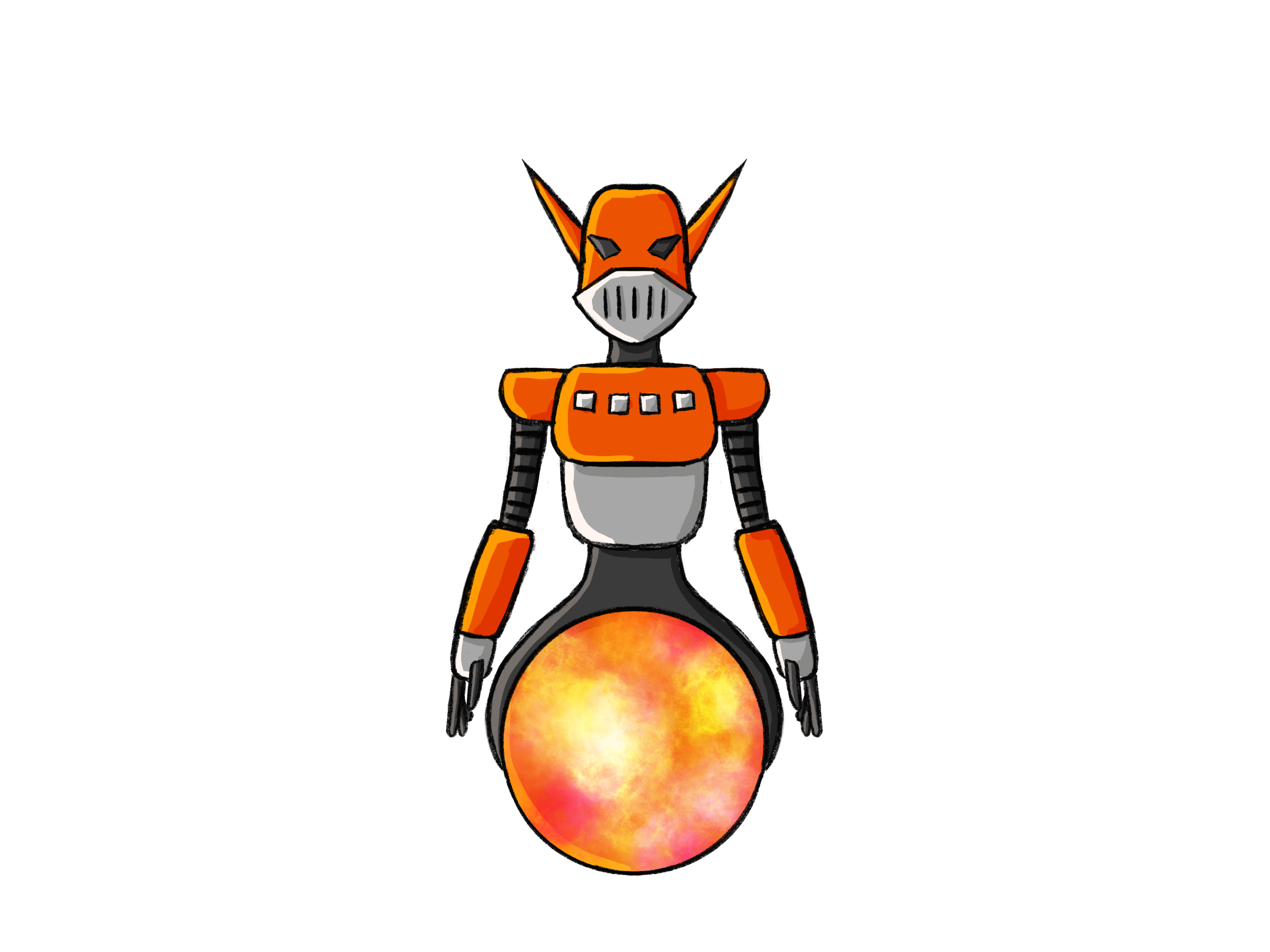 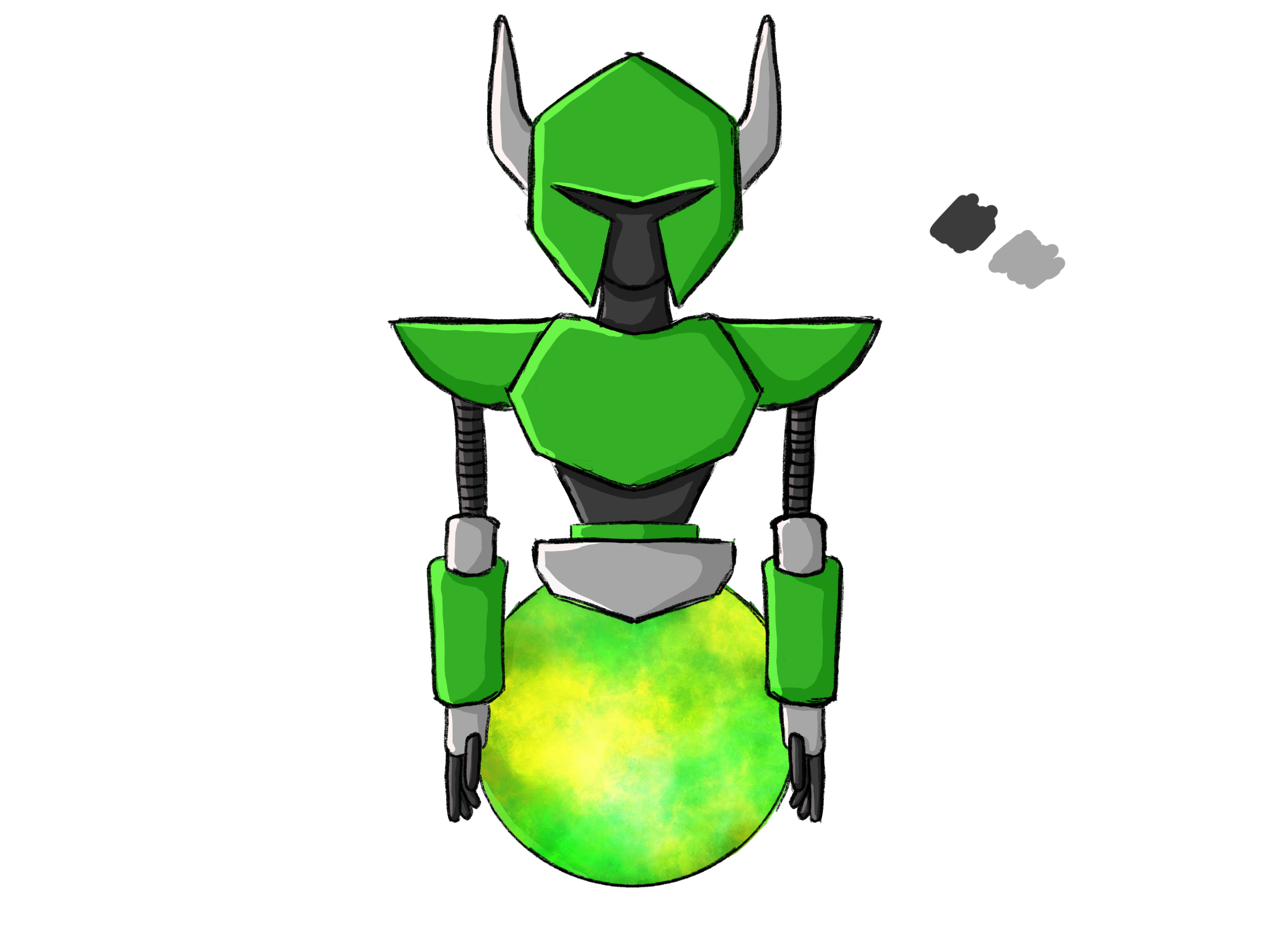 At this stage we had developed a sleeker, more action oriented design usually more associated with the super heroes we were aiming to create. We had also adopted color coding, a tool used by many of the shows I mentioned earlier to keep each character distinct and immediately recognizable. This was especially important when lots of the characters of these shows had the same or at least very similar silhouettes. Which was our problem yet. We liked the direction things were going, but the Warriors still felt somewhat disjointed, not like they were part of the same group. They were made up of the same general parts and they shared the ball, but their head, torso, arms and hands varied widely in shape, proportion and feel. So we tried to unify more of their design. It should be visible that they were not just part of the same universe, but of the same group - that they were teammates. 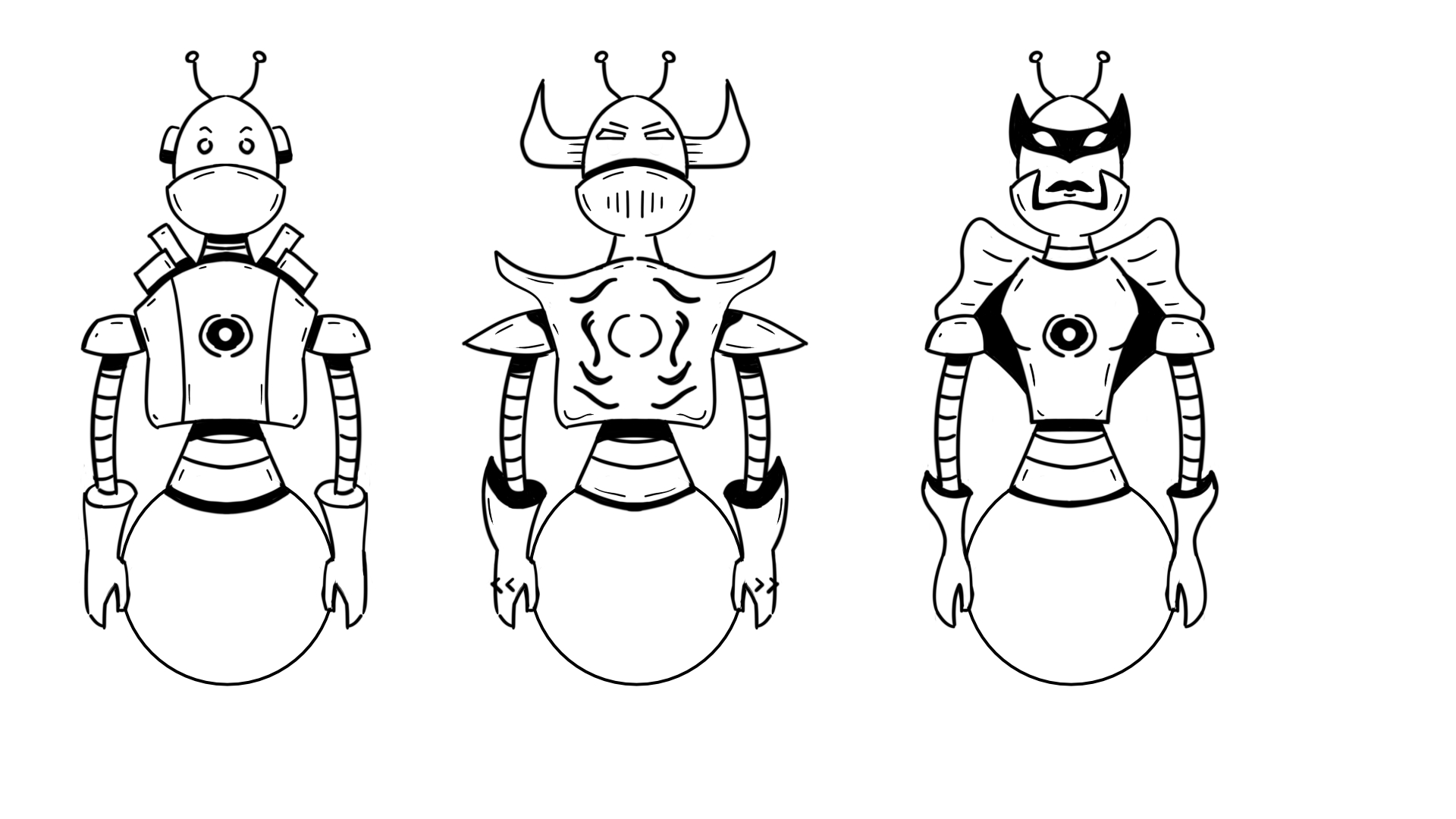 At this stage the designs were still wild, but all in all they felt like they belonged together, while still showing obvious unique traits. 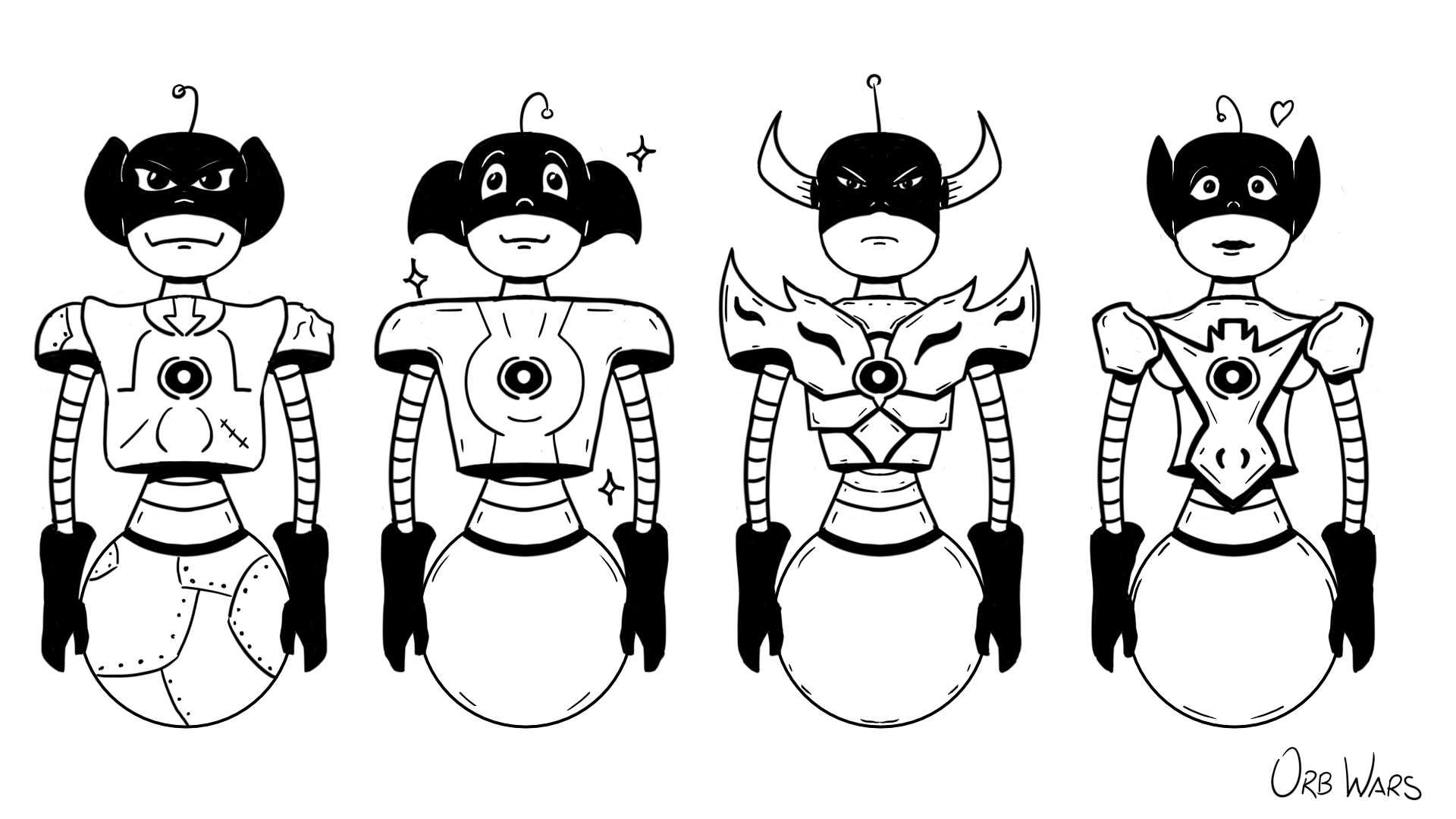 We got rid of the egg shape heads and replaced them by Lego figure shaped heads with masks and antennas, which further pushed our attempts at presenting a unified group of individually interesting characters. In the process they lost too much of their robotic nature though. 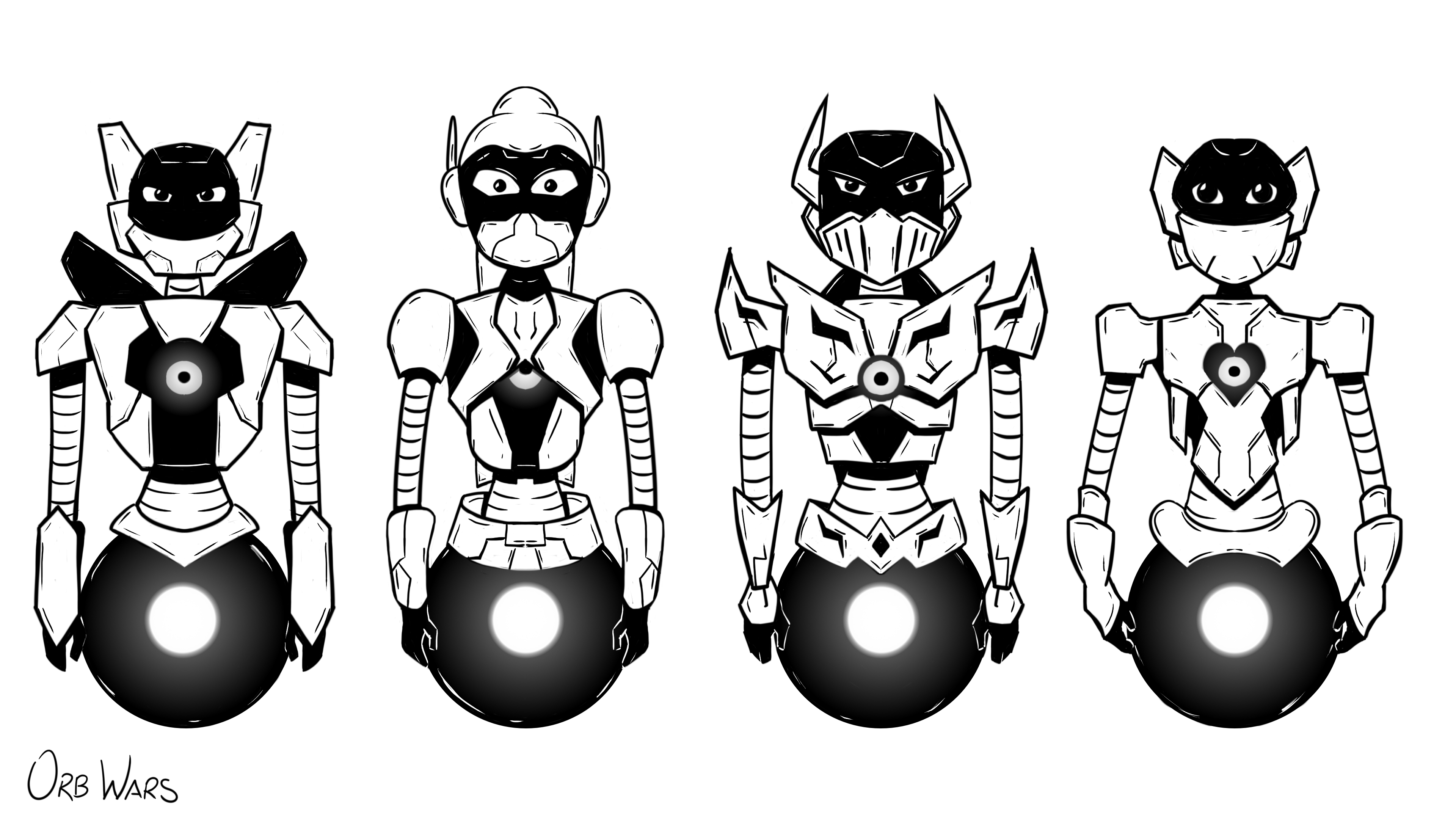 It still took quite a few iterations of minor tweaks and changes, but this is what we finally came up with. We finally felt like what we had was easily recognizable as a group while making sure each character had their own style and feel to them, and that they expressed the level of robotic super hero we were looking for. It was time to start modeling again.

We used Blender to model the meshes in two versions, a low-poly one in which we tried to keep the quads used to a minimum while keeping the overall shape intact, and a high-poly one, in which we used sub-div and additional edge-loops to keep the mesh smooth and clean, to give it a polished hard surface look. That allowed us to then bring the mesh over to Substance and bake the high-poly normals onto the low-poly mesh, so that from a distance you would get the clean normals and light reflections of the high-poly mesh, while having to compute only a fraction of it's polygons. For reference, the model of Alpha you see above had about 2000 quads in the low-poly version. While in Substance we texturized the meshes using a mix Substances generated materials and hand painted details. That being done, we brought everything back into blender one final time and rigged the model to be animated. 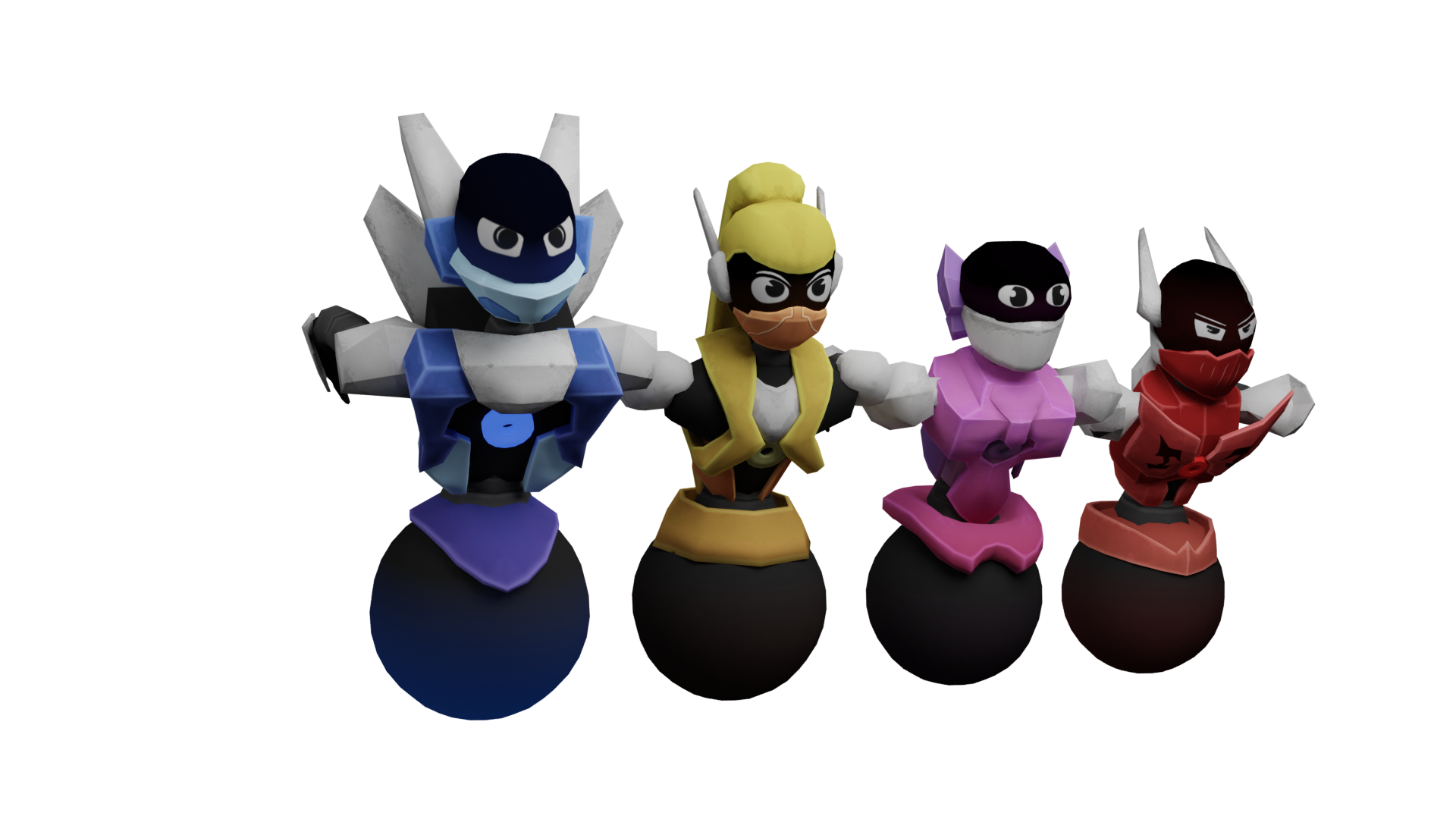 And there you have it! As mentioned above, we gave each of the Orb Warriors a unique color scheme to make them instantly distinguishable and we also named them. To keep it simple as well as in touch with the sci-fi theme they had going we named them Alpha, Beta, Gamma and Omega respectively, while taking their individual personalities or roles within the group into account. Alpha was to be the leader, with Beta as his second, Gamma was chosen to be the supportive Orb Warrior among the four, similar to the many uses Gamma rays have for science and medicine, and the outlier, Omega. We know that Delta would have been next in line, but given his edgy nature and angsty design, a play on them being the Alpha and the Omega, thus placing him in the position of The End for his enemies was too good of a fit to pass.

I hope you are excited to see them in action yourself once the game lauches, very soon!