After winning ‘Best Upcoming Mod’ for 2008 MOTY, does Curse live up to its promises?

There are very few mods that catch my eye as I scroll through the queue of projects awaiting authorization. Curse was one of those few. While still early in development, it showcased screenshots that spoke volumes. As time went it on, this was made all the more impressive by the fact that the majority of the mod’s visuals, game design and PR initiative are attributed solely to one person. Does Curse live up to its promises? Yes. What you’ll find is an experience that will leave you craving more.

Curse’s first episode pits you inside of the Necropolis with little explanation of how you got there. Equal parts puzzle and action, the objective is to make your way through each section, clearing it of evil mummies and, yes, even a worm demon. The mod is non-linear to a point; you can jump back and forth between levels with out totally completing them and the game will remember the state you left them in. However, as a reward for finding all the hidden switches, you can unlock a final climactic battle for each section. Probably the most interesting of all is Dosa’s level design. Each section is constantly reconfiguring itself as you press buttons to unlock new areas. Final “nightmare mode” battles feature a drastic change, going so far as to darken the sky blood red. Re-treading the same areas doesn’t get frustrating though, since most puzzles are cleverly laid out. It’s an efficient map layout that manages to keep the player engaged. 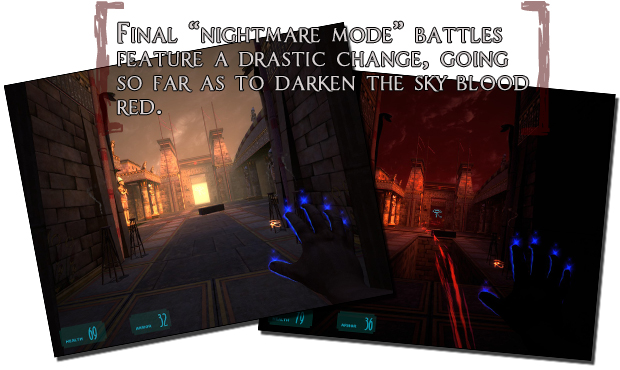 If you’ve followed the media trail that led up to Curse’s release, you might have been impressed by the work-in-progress footage. Once in-game however, you’ll quickly realize that the Necropolis is more detailed and ornate than you were lead to believe. Every corridor and courtyard is a visual feast for the eyes. Whether it’s the sunset bloom flaring back as you exit a tunnel to reveal statuesque surroundings or the slight hint of a red glow highlighting the carved hieroglyphs adorning the tomb walls; you’ll find yourself stopping to take in the view more than once. In short, none of the media does Curse any proper justice – you just have to experience it firsthand. 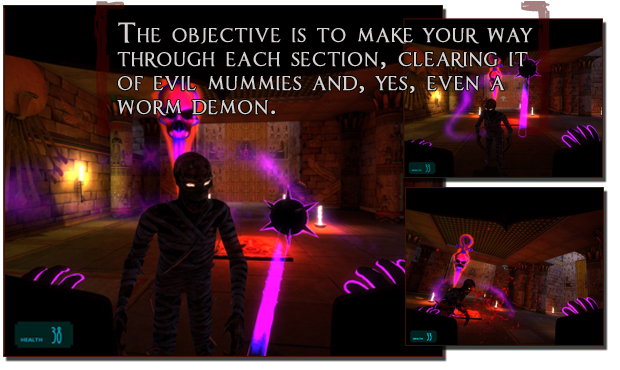 Of course, the other half of the reason to jump into this total conversion is the stellar sound design and music. Enlisting the help of both a sound fx designer (Robin Arnott) and a composer (Rich Douglas), Curse is a perfect example of how much value great audio can bring to a mod. The custom audio lends credence to Dosa’s new world created on the Source engine; no stock Half-Life 2 sounds here (beep beep beeeeeeeeeee-). The soundtrack is used sparingly with chilling effects. When it does come into play, you’ll steel yourself for an upcoming encounter. Any way you look at it, the audio in Curse matches the same high standard its visuals attain every step of the way, which is a rare case among mods.

All of this points to Curse as being a tour-de-force within the modding scene. If there are any flaws to be found, one might say that it’s much too short and missing a good story. However, Curse is planning on following an episodic release schedule. For some, this might bring comparisons to that other puzzle-based mod set in ancient ruins – The Ball. If Curse can deliver on a similar sort of a timeline, it may just be a matter of months before we can explore more of the Necropolis. 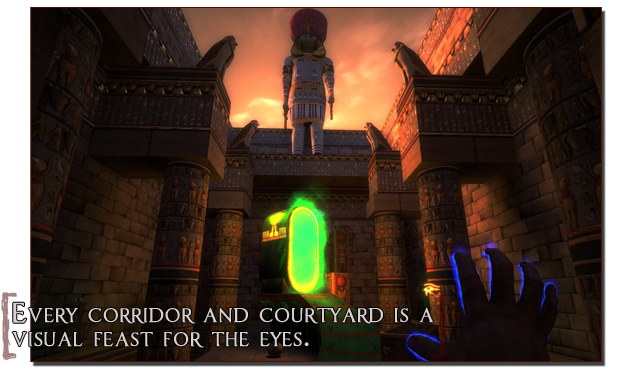 Agreed, the map layout is pretty clever, even though I found myself treading the same path for a couple of times, doing the same puzzles. Yet, the game is forgiving on those who prefer to rush through and it's usually pretty clear what you need to do. It's a new take on the dungeon theme and it's very well done in most aspects.
Even though the mod is beautiful and probably has aspirations to make it to a commercial game there is one flaw, I found more than just peripheral.
A game like this needs story or at least some kind of goal you can identify with. Using so many unbridgable gaps in the level design screems for some kind of objective, e.g. generic princess N^57 to be dragged away from you by the guards. To save the princess you have to become a demon yourself, so in the end you fall short of happiness, but save your beloved. Who will then sacrifice herself to be with you, yadda, yadda.

Nice, nice game! three years of hard work, no doubt, but don't underestimate the power of story, be it even as generic as the one I posted above.

I thought the same thing, but if he's planning to release more episodes the story can developed along with them and retroactively inserted into previous chapters (like The Ball).

The Ball did have some story in the first chapter though. "You fell in a hole. Go wander around while we think of some way to get you out"

i DLed it right now

It's awesome, good to see new hud, sound is amazing, textures amazing. It's all good. Hopefully soon another episode! :D
Screenshots in other post was still old hud btw.

Beat it yesterday, really beautiful and interesting game, combat is a little weak and thats about all the critique i have for it.

yes it's just wishing the mouse left and right ;-)

ahh, now you gave it away...What snake? There was no snake!!!

i finished the game in the red room in third part! or wasn't this the end???

If you saw the huge meatball,(see the image at the top of the article: the hell awaits one) then it is 100% sure you found/solved all the secrets.

SK1LL3R,because of you happy of end not so happy!

At last! Been looking forward to this since the first screen shot.

only dissapointment for me with this mod was the so-called boss fights. it wasn't a boss fight but more of an avoid the boss in order to complete a task. so apart from that i enjoyed this mod. i look forward to its future developement.

Really good mod, I agree completely with the first post.

Espectacular!! I especially liked the end credits it gave this mod a very cinematic felling.

Bright colors... reused animations, and pretty nice effects. The puzzles were fun... the coding for the "Mummy Destroyer" was very well done. Very unique feature. I'd need more then this to go on, this was basically a level introduction (or so I hope). I'd like to see more enemys, different mapping styles, and maybe more challenging puzzles.

Totally downloaded now, can't wait to play it. Pretty much all the single player mods I've played for Half-Life 2 weren't all that great, save a few. Hopefully this will be good! Probably is, judging from the response from you guys.

I must admit, I was pretty disappointed. The combat doesn't work for me. It might be 'unique', but that's not necessarily a good thing. Not right here.

The sounds were odd, at times, say when you pick up and use keys :P I couldn't take that seriously.

The puzzles... What puzzles? It was fairly quake stylish. Go there. Press a button. Go back through the new door that's opened. Repeat.

The one thing I really liked was the ending. It was really ominous and looked great. But at the same time I was like: "... That's it?".

It was WAY too easy and not quite as immersive as I'd expected.

you even completed nightmare mode?