A look at the C&C3 mod "The Forgotten". Three years in the making, this mod takes a look into the lives of the mutated outcasts of the Tiberium universe.

The Forgotten is an ambitious mod that adds a fourth faction to Command and Conquer 3, the mutated "Forgotten," complete with new units, structures, support powers, multiplayer maps, music and a five mission campaign featuring full motion video (FMV). After three years of development the mod is finally out but has it been worth the wait, or is it destined to be forgotten? 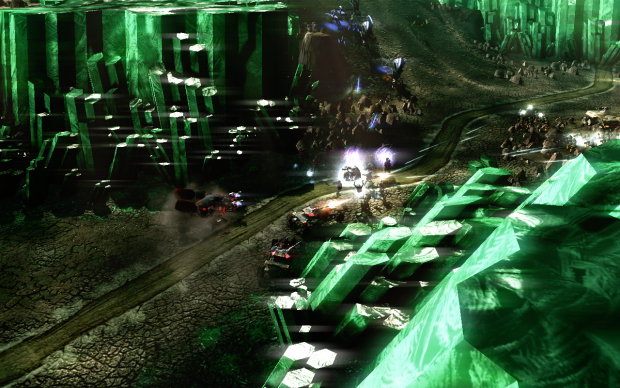 While the three "super powers" are busy fighting each other look for opportunities to isolate and overwhelm them.

In the Tiberium universe of Command and Conquer the major part of the conflict centered around two factions in the first and second Tiberium wars: the Global Defense Initiative (GDI) and the radical faction known as the Brotherhood of Nod. The alien Scrin were hinted at in Tiberian Sun and became a fully playable faction in C&C3: Tiberium Wars when they began their invasion of earth. But there is a fourth faction in this struggle that has been largely overlooked. They are The Forgotten. These humans, that have been mutated by Tiberium and become outcasts from society, helped both Nod and GDI in Tiberian Sun and where to play a major role in the story of C&C3. But this was cut during per-production and they appeared as nothing more than mobs that could be recruited from captured tech buildings. However, the Forgotten have not been abandoned by the fans, and one very dedicated group has brought there story to life in the times surrounding the third Tiberium War. 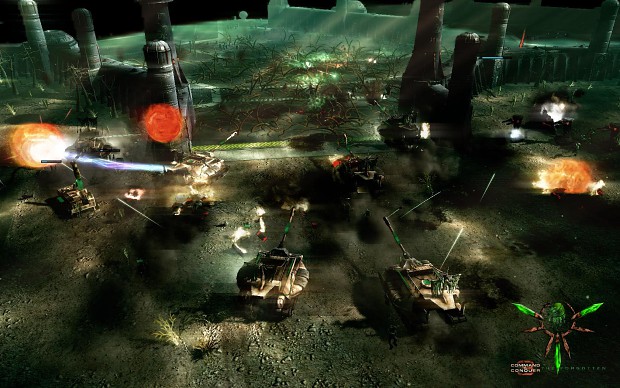 Ignore the Forgotten at your own peril.

Gameplay is pretty much what you would expect from Command and Conquer 3, with the exception of deploy-able walls for all of the factions. The Forgotten are simply a new faction that fit right in next to the existing three. The level of polish on the unit and structure designs, as well as the good voice work, could easily pass for an official expansion... complete with balance issues. The main issue is with multiplayer/skirmish's early game infantry spam on small maps with buildings you can garrison. The Forgotten can pump out infantry faster than anyone, and if they can get intrenched near the enemy base they have a good chance of controlling the map early on. This allows them to tech up and, while the Forgotten's vehicles are mostly relics from the last war or cobbled together from spare parts, they can be quite powerful if allowed to mass. I'm not sure how this will effect real players, but I found that the Forgotten were much easier to play as than against in Skirmishes. It's really nothing game breaking, I just wouldn't mind seeing a balancing patch to even things out a little.

A 4 way FFA skirmish showing off all of the factions in The Forgotten mod.

The campaign is the really what makes this mod special, what with the FMVs and all. The story mainly involves an ex-Nod spy named Salvador Trogan who is trying his best to rally his people to stand up for them selves. All of the FMVs are pretty much just of him briefing you on the situation and trying to motivate you to do what must be done. There is one other character but he doesn't say much and is mostly forgettable. On a whole I applaud the effort that the team has put into making FMVs and the character of Trogan is pretty well acted out. 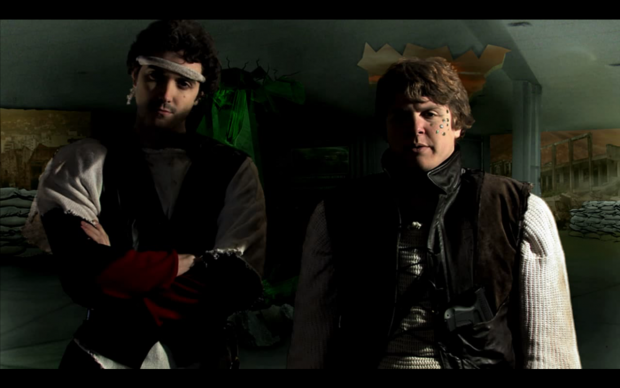 Salvador Trogan (right) may not have the charisma of Kane, but his message of uniting the Forgotten hits many of the same chords. The other guy doesn't say much.

My biggest complaint is that it's basically just him monologueing to the camera and it gets to be a little tiring after a while. A little shorter and more to the point might have been more effective. Also it would have been nice to have a few more missions so that there would be more than one character with screen time and development. Alas, the budget and time constraints of a free mod would likely not stand for that.

The missions them selves are rather difficult, even for an experienced RTS player, on anything harder than “Easy.” You generally start off with very little while the enemy forces have multiple bases and plenty units right off the bat. They also have nearly full tech options and some of the bases are
very heavily defended, so much so that it's almost ridiculous at times just how many defenses they have. 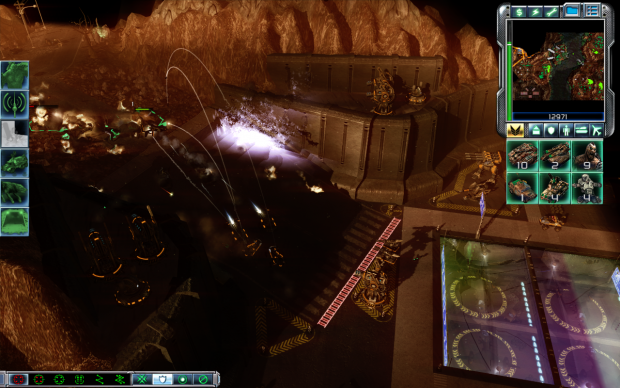 The first mission is probably the hardest due to the fact that you have such limited tech. While this early tech is a little overpowered in Skirmishes it's woefully inadequate at taking down superior GDI forces, especially when they keep getting waves of reinforcements. Further adding to the difficulty is the fact that the game gives you no indication as to where you need to go to find your objective. You are given in-mission text letting you know what to do, but it only comes up periodically. C&C3 could be a little heavy handed in this area (taking control of the camera and slowly rotating over every new objective) this goes a little too far to the other extreme. I don't know if this was a limitation with the tool set or a conscious design decision. Either way I suspect it will frustrate most players. So, unless you're a real pro, I'd recommend sticking to the “Easy” difficulty. You can always replay it on a harder difficulty later, just be prepared to restart. A lot.

First mission highlights. Note that this is on easy and after many attempts.

It may not be the most balanced mod, the campaign may be a little user unfriendly at times and the ending may seem a little abrupt, on a whole it's a great accomplishment. Most mods of this scope never see the light of day and it's refreshing to see this one deliver on it's promises. For Command and Conquer fans The Forgotten is a mod that you'll remember for quite some time.

"I don't know if this was a limitation with the tool set or a conscious design decision." It was more of a "we dunno how to do that" thing.

That's certainty understandable. Though it did lead to some interesting moments. On the first mission I was just trying to figure out where the heck the tower was that I was supposed to be capturing. When I came to the base made up entirely of defenses and power plants I suspected I was on the right trail. Also on mission four I was trying to figure out how I was supposed to get across the canyon. My thought process was something like this: "Can't fly units over there, but I can... wait, no I can't. That means I'd have to... Oh..."

I have been stuck on mission 1 a while

try destroying the bridges using ctrl+ right click on the bridge. they repair them, but it slows them down a bit, allowing you to focus on defending those bridges you can't destroy.
gives you some time to build up forces and get some substantial defences.
when you have the tower, move your MCV to the square it's on, and build masses of power stations and barracks, in order to build defences and infantry around the tower.

Defenses were broken for me. I couldn't place them at all. :/

You have to place them on your Power Stations.

My thing is that My defenses are always destroyed and as soon as I send in a strike force, I get mowed don by missile launchers(whose range out matches the forgottens' defenses), then APCs and Predators (So im basically blitzkrieged)