After years of development this popular mod for Command and Conquer: Generals: Zero Hour has finally come out of “beta” status having reached the 1.0 milestone. This is a great time to dust off your old copy of Zero Hour and enjoy the three new generals, 100+ new units, structures, upgrades and powers. So get ready for some serious shock and awe!

Shockwave is a massive mod for C&C: Generals: Zero Hour that adds a huge amount of content and improvements over the original game. It's been over a year and a half since their last update, which was originally going to be titled 0.96 but grew into a full blow 1.0 release. For new comers it might be a little overwhelming at first but it's well worth it if you like lots of units and explosions a-plenty. 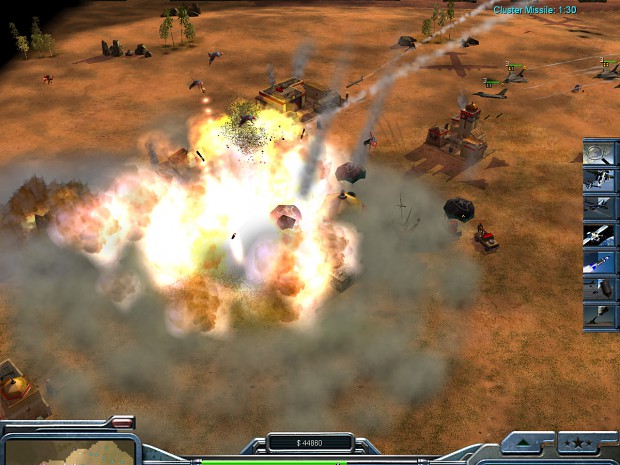 The Shockwave has finally hit and it's as forceful as ever.

One of the main goals of Shockwave is to add more diversity between the sub-factions (Generals). They do this with over 100 new units spread over the the existing 9 Generals as well as 3 brand new Generals: General Ironside (heavy armor) for the USA, General Deathstrike (scavenged weapons) for the GLA and General Leang (special weapons and artillery) for China.

In addition to having more units they also have new powers, structures and upgrades at there disposal to cause massive havoc. This succeeds in making each sub-faction feel very different from the others while still maintaining the core principles of the base faction. This makes it easier to get up to speed if you're new to the mod as units that may not be totally familiar should at least be similar to something that you know from Zero Hour. As far as the basic gameplay mechanics of Generals, they are unchanged. You still need supplies and power (unless you're GLA) and you still earn General points that you can spend on powers and unit unlocks. All the new content simply gives you a lot more options when planing your strategy. 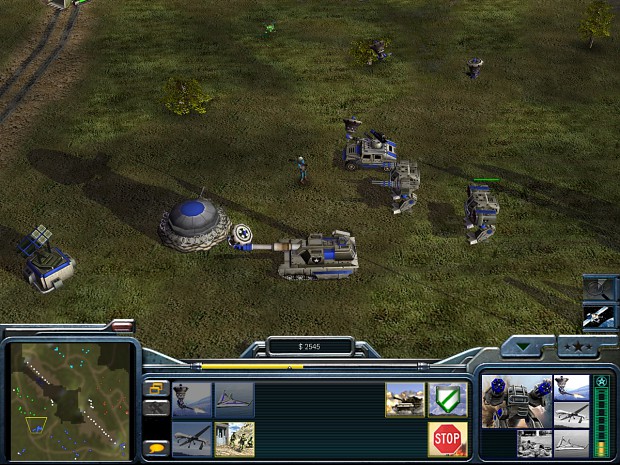 The base factions have not been forgotten either. Here you can see a new unit for the USA that is a powered armor suit whose weapon changes depending on the type of infantry you put in it.

Shockwave not only adds a lot of new stuff but manages to balance it all quite well. Both new and old units have there place in the game and no one faction or general feels totally overpowered. For the amount of content we're talking about here that's a huge feat. It may take a little experimentation to find what works best for your strategy, but most of it is pretty intuitive for anyone who plays any amount of RTSs. Tanks are still tanks, just some are better at one thing than another. 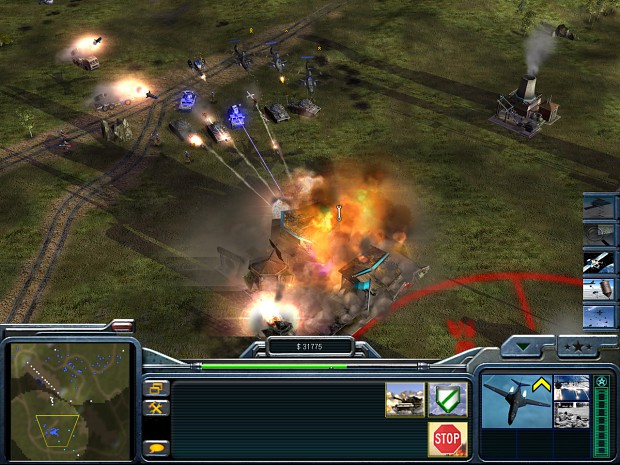 The USA Air Force General uses a mix of units to clean up what's left after his bombers have done their work.

While the single player campaigns are disable, skirmishes and challenge modes are still there for your solo playing pleasure. The AI does a good job of using the new units, though I'm sure human opponents will be more creative than the computer. There's even challenge maps for the new generals, though I personally haven't played them yet. Still it would be nice to see a Shockwave version of the campaigns. 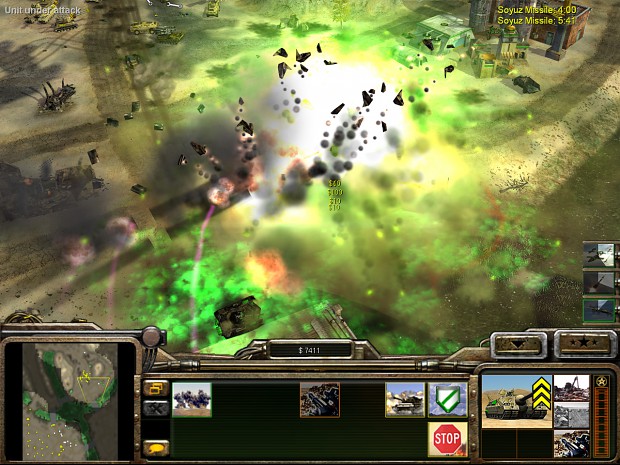 General Deathstrike taking down Doctor Thrax. You might want to hold your breath.

The look and feel of the mod stays very close to that of Generals' over the top explosion fest, only dialed up to 11. There are some new particle effects, which make the smoke and explosions even better. The new units tend to look better than vanilla ZH but infantry units are still very low poly and textures in general are a bit blurred when compared to more modern RTSs. The fact is that, aside from the explosions, Generals is really starting to show it's age (especially the lighting and shadows) and this mod doesn't do a whole lot to hide that. No shiny, new shader effects or high poly models to make your new graphics card scream in glorious agony. However, there are quite a few great unit designs. Some take cues from other Command and Conquer game (like the Mammoth Tank, right out of C&C3) while other are more inspired more by real world weapons. So there is still a lot to like here, especially things to satisfy you're inter pyromaniac. 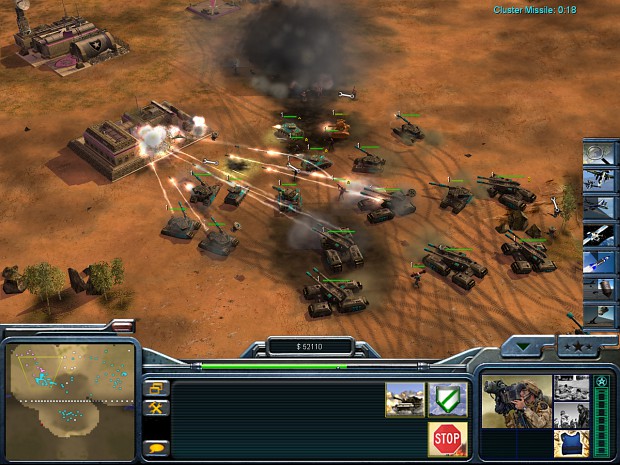 Most of the new content is in the for of ballance tweeks and bug fixes. There quite a few new sound effects in the game. These all fit in with the rest of the mod nicely. It's always a good thing when you can't tell the professionally done sound work of the original from the stuff made for the mod. Additionally there's some skirmish/multiplayer maps with new tech buildings. Other stuff that's new is variations for each general's command center and worker unit (which helps greatly in identifying who you're up against) and some cameo changes. All in all it may not seem like all that much new for old players but that's mostly because that last version had so much in it. This is mostly a refinement of what was there with a few things to fill in. Taken as a whole this mod is one of the best rounded content packages for any Command and Conquer title. Ever. 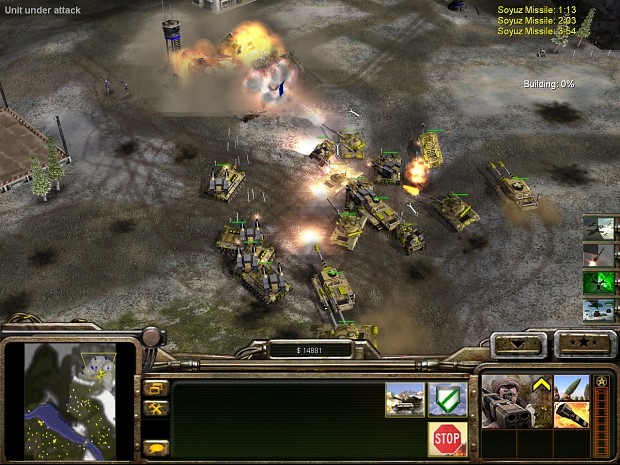 While GLA General Deathstrike's units may not start out as the most powerful, they can become formidable after scavenging a few weapons off of there victims or fallen friends.

In the end Shockwave is all about taking what was already good about Zero Hour and adding a lot to it. The new units and powers all give you the sense that your choice of general really will make a difference in the game while doing a good job of rounding each one out so that you're not locked into one type of strategy. So if you are looking for a highly polished Zero Hour mod that delivers a wide verity of new toys for you to command than Shockwave will simply blow you away.

To anyone with the power to do so: could you at least link this to Zero Hour? As it is SAGE is the only thing I have permission for right now. Thank you.