A man more notorious than other, who's criminal history spans 81 years. Who is this mysterious figure? 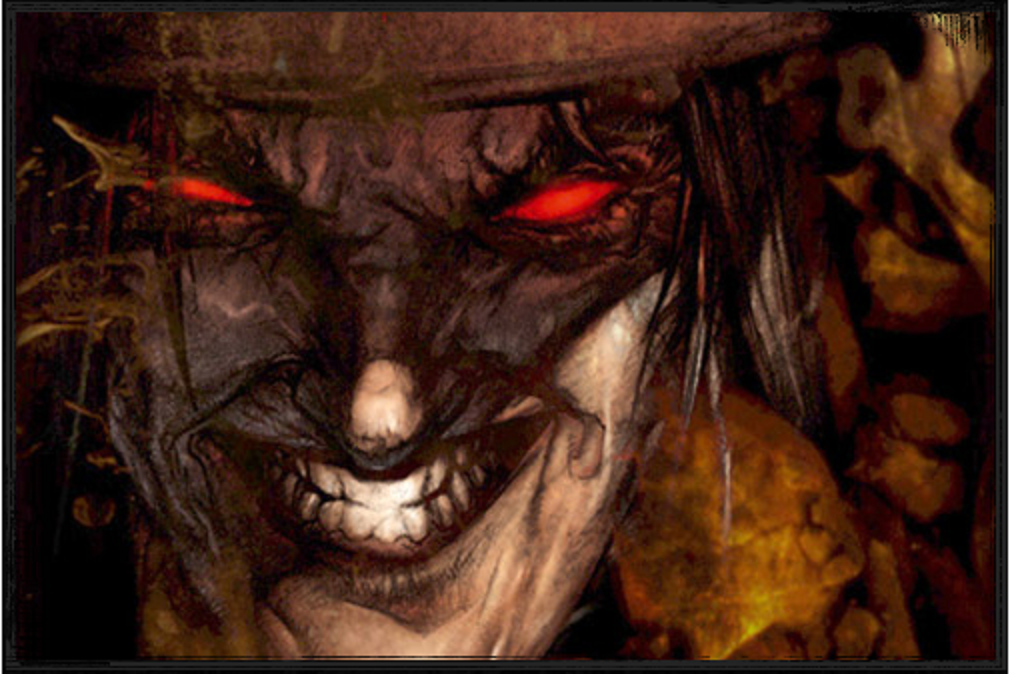 "In an age and a region renowned for cruelty and violence, Caleb was legendary. Born in western Texas in 1847. He had sealed a reputation as a merciless gunfighter by the age of 17. But it was seven years later when he met Ophelia Price that his hunger for bloodshed took on a menacing new timbre. She was already well beyond the bounds of sanity when he found her cowering in the charred ruins of the burned out homestead where her husband and child had perished only days before. It was neither her tattered beauty nor her plight that compelled Caleb to take her in, however, - it was the words he picked out of her virtually incoherent mumbling. He learned that her husband had attempted to rescind his membership of the dreaded Cult of Tchernobog and in return cultists had set fire to the house in the night. Ophelia was filled with rage, - not at the cult, but at her husband, whose cowardice she blamed for the death of her young son.

Ophelia was Caleb's doorway to the Cult and its dark purpose. He could not have known that in time he would come to love her, nor that their service to the Cult would find the two of them beloved among the Chosen, elite servants of the dreaming god Tchernobog, the One That Binds, Devourer of Souls. In the Hall of the Epiphany, a temple that spans the chasm between the worlds, the four remaining Chosen stand at the forefront of a procession of worshippers. Tchernobog's presence is felt more than seen. The great, frigid weight of a hunger that spans millennia. He speaks in a cacophony of voices stolen from the dead, summoning the Chosen to the centre of the sacrificial ring. They stand before the Dark God, united by a sudden sense of doom. A wordless cry rises up from the seething shadows. One voice, swallowed up by many until the hall resounds with them. The members of the procession behind the Chosen melt away in a gust of ethereal wind. Extinguished like so many candle flames. There aren't even ashes to indicate they ever existed. The Chosen look to one another in confusion and dread. They can already feel the ties that bind them to Tchernobog fraying. Why? How have we failed you? But there is no answer other than the shattering scream that threatens to tear the universe to shreds. Darkness swells around them. Swallows them. Their cold, abandoned souls fall through the abyss. And they burn.

Caleb awakens. Cold and damp, in a body he no longer knows. It has long lain as a corpse that refused to rot, protected from putrefaction by some unearthly link to its master. The pain of protesting muscle and flesh invigorates and awakens him. He welcomes it. It distils his hate into the maelstrom raging in the centre of his mind. An agonising cry breaks out of him, shattering the stone lid of the tomb in which he lies, knocking loose sediment, cobwebs, and the small, unnoticed creatures that have shared his grave with him. A single word rings out through the darkness, echoing Tchernobog's lingering howl: "Why?"

Blood for blood. They promised many things.

"Faith is the key," they said. "Faith will show you the way." And I believed them because I wanted to believe.

But faith must be proven. I learned that the first time I wrapped my fingers around the haft of the ritual dagger to demonstrate my devotion to the One that Binds. They had not told me about Him, but there would be many lessons in the weeks to come. Unthinkable lessons. And a name to carry like a thorn in my conscience, a name never to be spoken aloud lest He hear me: Tchernobog.

All I've earned by my labor and my sacrifices are more and greater promises. I've carved my soul to shreds in service of the Cabal. What little humanity I retain is corrupted by the Beast, which has grown stronger with every life I've taken. Well, the time has come to sate its appetite and bite the hand that feeds.

Vengeance lies at the end of a long, bloody road through the very estates of the damned. Pity only that I have no greater weapon than this old pitchfork with which to still the rustling of leathery wings and douse the gleam of the eyes in the darkness. But I will exact blood for blood from my adversaries and send them back into the shadows between the world of the living and the land of the dead. This I vow."

"Perhaps the beast within me is what my master fears... he shall find out what fear is."