Posted by DaedraWarrior on Feb 3rd, 2021

Hello everyone! Recently we told you about the Empire, one of two factions that will appear in the first trial version of the mod. Now in turn we have an equally obvious contender for the role of a faction that should be one of the first to appear in mod - the Aldmeri Dominion, which has absorbed as many as three peoples of Tamriel, the eternal enemy of the Empire.

HAVE YOU HEARD OF THE HIGH ELVES? 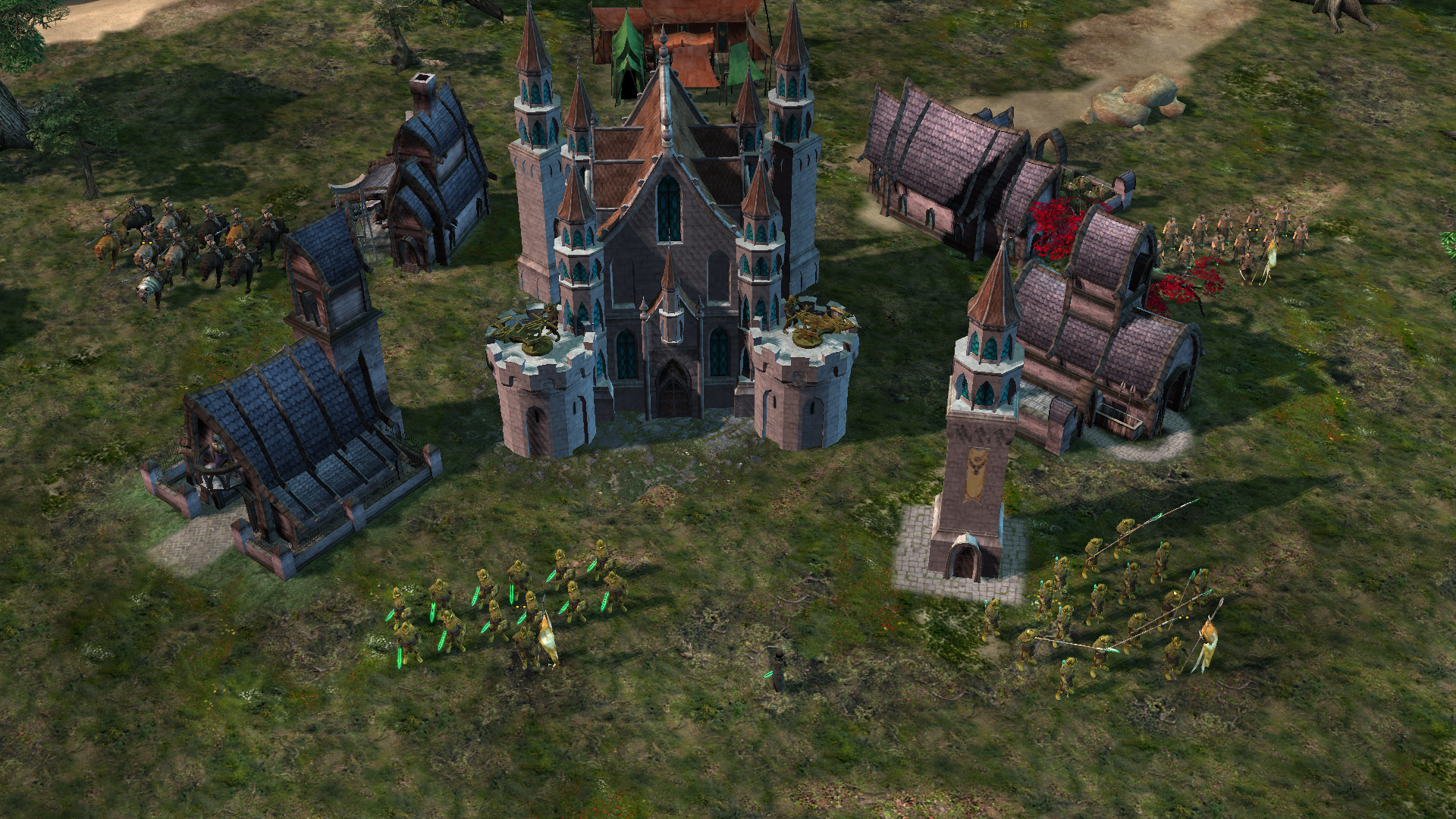 The history of the Dominion, like that of the Empire, is full of ups and downs. First Aldmeri Dominion dates back to the middle of the Second Era, when during Great Interregnum Altmer (or High Elves) allied with the Bosmer and cat-people Khajiit to fight back the invasion of Daedric Prince Molag Bal from Oblivion and to strengthen their influence in Tamriel during the process. And although the idea of ​​the Dominion as a union of Mer and Khajiit belongs to the Bosmer king Aeradan Camoran, Altmer quickly took a dominant position in it. Like any forced alliance, Dominion fell apart shortly after the end of Interregnum, but by the end of the Second Era, Altmer founded Second Dominion to fight back the already strengthened Empire of Tiber Septim. However, this state did not last long and Altmer quickly became vassals of Tiber, who conquered their inaccessible islands with help of the giant brass golem Numidium.

The idea of Dominion was forgotten for four hundred years, until at the beginning of the Fourth Era, an aggressive party of Thalmor seized power in the Altmer kingdom. Taking advantage of the weakness of Empire, mired in a civil war after the death of the Septim dynasty, Altmer quickly subjugated the Bosmer and Khajiit, some by force, and others by cunning, and founded the Third Aldmeri Dominion, which became the most powerful force in Tamriel two hundred years later and unleashed the bloodiest war in its history.

The mixture of three different cultures has left an indelible mark on military strategy of the Aldmeri Dominion. While the Empire relies on heavy armor and indestructible defenses, Dominion uses speed, agility, stealth, and magic in combat.

In the first unit-producing building, Dominion Barracks, player will be able to recruit five units. At the first level, three units will be available: Dominion Swordsmen - Altmer in Moon Stone armor, who can easily defeat imperial Townguard units in an equal battle, but they can take legionnaires only in number and maneuverability; Valenwood Archers are made up of wood elves and are superior to their counterparts from the Empire in attack range, and can also hide in forests, but they die much faster from attacks by enemy infantry and cavalry; and finally - Dominion Pikemen, Altmer soldiers with pikes, which, like swordsmen, are inferior in all respects, except for speed, to the imperial legionaries, but stronger than Townguard. At the second level, Dominion will have access to the Elden Wood Archers, skilled Bosmer shooters with high damage and range that can hide for a limited time on any terrain, and at the third level - Royal Chosen, elite cavalry and one of the three heroic units of the Dominion. 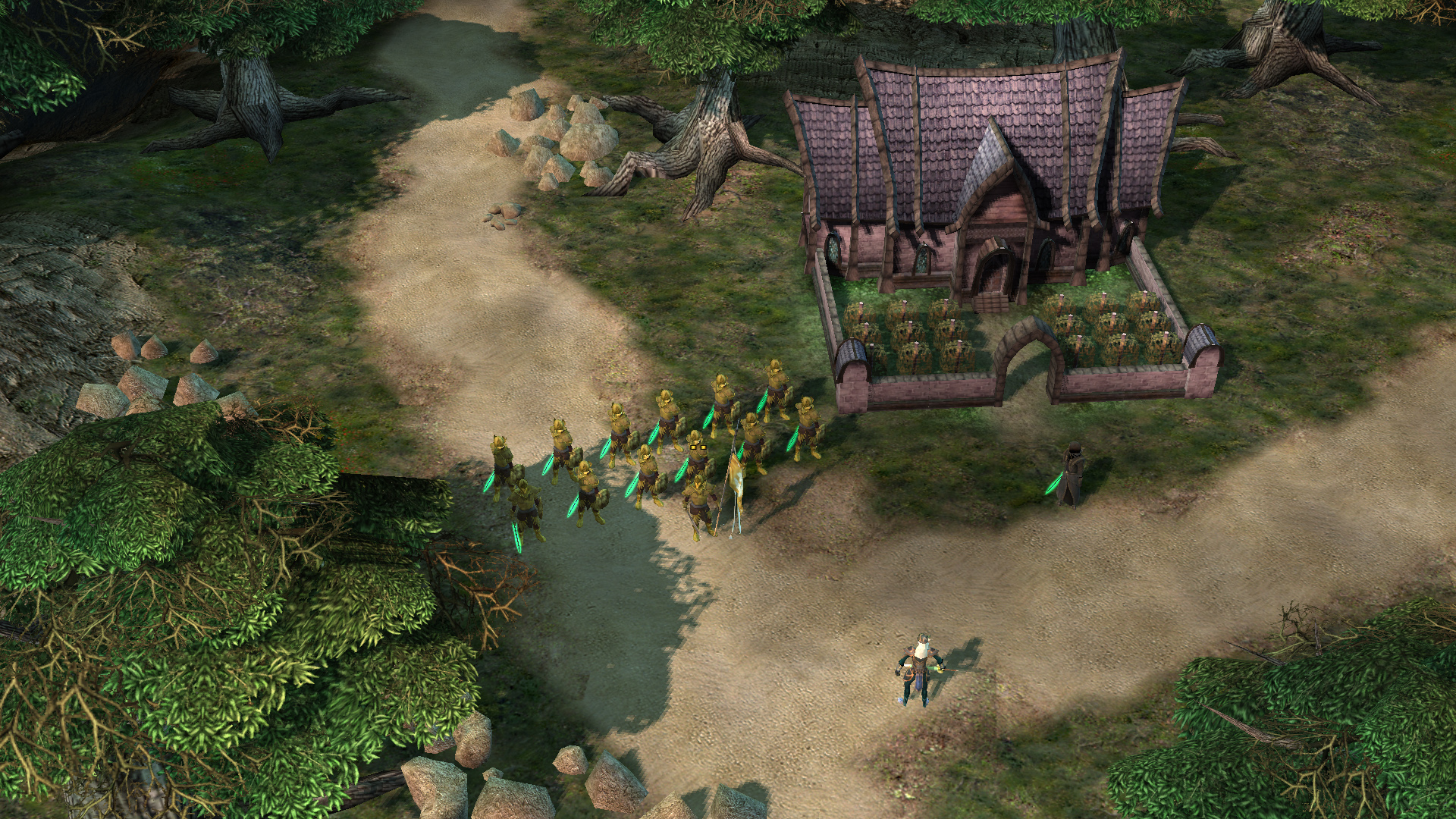 The second unit-producing building for Dominion will be Khajiit Caravan. A distinctive feature of this building is that, like standard farms, it produces resources, but it’s resource output is very little. In this Caravan, player will be able to summon three units: a detachment of Battle Senches, huge cats that play a role similar to Wargs and Wolves of Angmar in battle and are able to drive the enemy into fear with their roar; Nomad Riders - Khajiit swordsmen mounted on Senches, fast, but inferior in crushing power and close combat to the Imperial cavalry, as well as a ranged Khajiit unit of Nomad Archers, available at the third level of the Caravan.

Thalmor Headquarters, ​​third barracks of the Dominion, will allow the player to recruit the most unusual units of this faction. At the first level, player will be able to produce Thalmor Justiciars- a single unit that is designed to eliminate enemy heroes, and also has three abilities - Propaganda of Courage, which gives allies around him immunity to fear, Propaganda of Might, which helps allies near Justiciar earn experience faster, and Propaganda of Supremacy, which cancels leadership bonuses for enemy units nearby. Only three Justiciars can be placed on the battlefield at a time, and each of them can acquire only one ability. Finally, at the second level of the embassy, ​​the player will be able to purchase Varlanaga, an Altmeri siege ballista, and Baelifs, Summerset law enforcers who can switch between melee and ranged weapons. 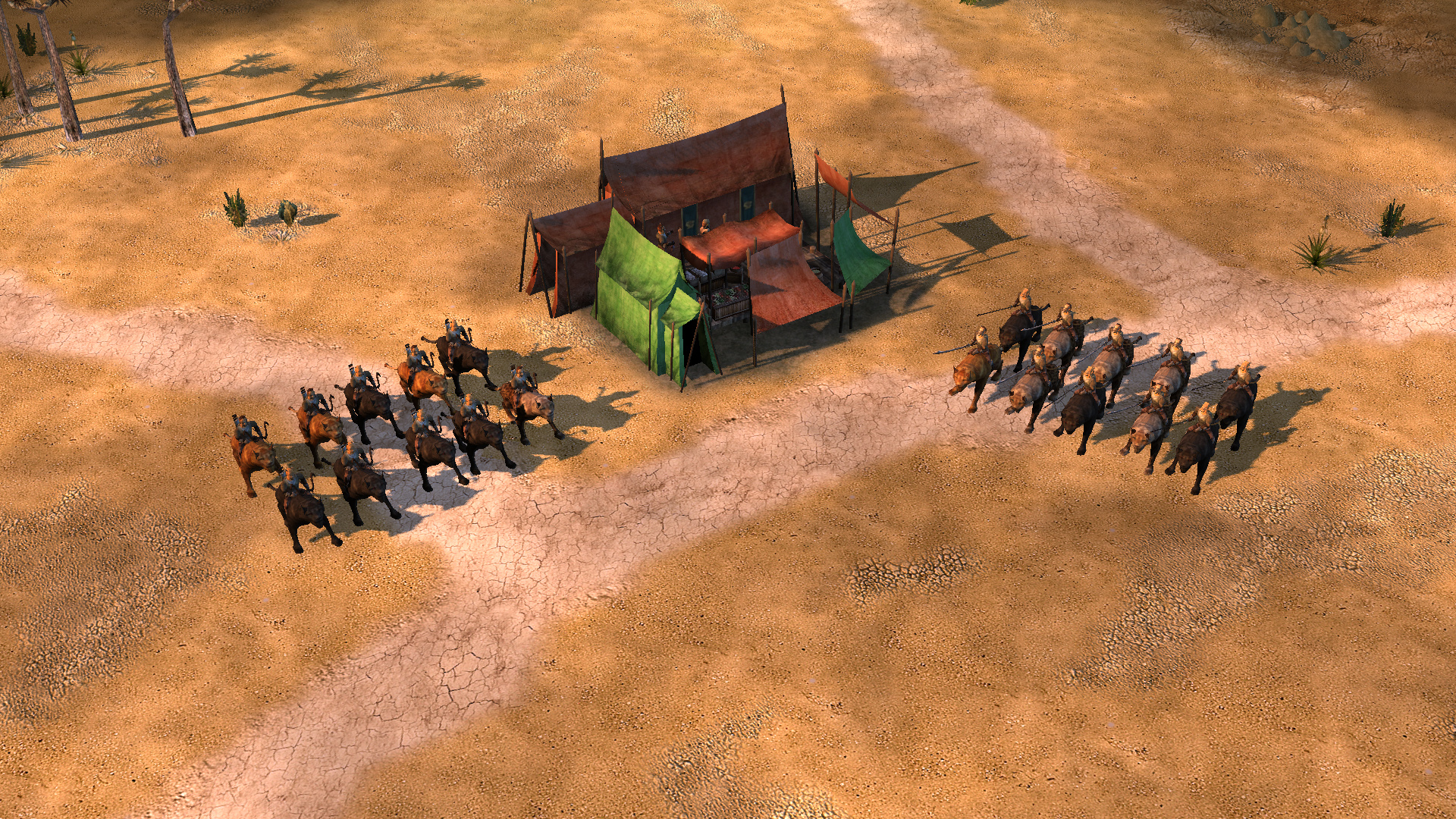 Khajiit Caravan in the middle of Anequina

In addition to three barracks and a vineyard, main resource building, the Dominion will also be able to build battle towers and other defensive fortifications, as well as the Moon Forge for making upgrades, Statue of Auriel, which strengthens the allied forces next to it, and Ayleid Well, which heals units.

Just like the Empire, Dominion will be able to summon seven heroes from the fortress. When our last article was published, it was assumed that there will be only six of them, two from each race, but after a little thought, we decided to add a seventh. Interestingly, the Dominion will also be one of the few factions with most of the heroes from the same Era.

Dominion's starting hero is Razum-dar, a Khajiit and spy in the service of Queen Ayrenn, well known to everyone who played ESO on the Dominion side and completed the Summerset DLC. In his set of abilities, there will be an opportunity to become invisible for a short time, increase production of resources in selected building, and also throw a flask with skooma, which will poison enemy units in a small area.

The second Khajiit hero of the Dominion will be Khamira, heir to the throne of Rimmen. She is an archer hero, capable of freezing enemy hero with her Paralyzing Shot for a while, inspiring Khajiit squads around her and teleporting selected allied units. Similar to Legolas from the original game, Khamira will also be able to briefly engage in close combat when needed. 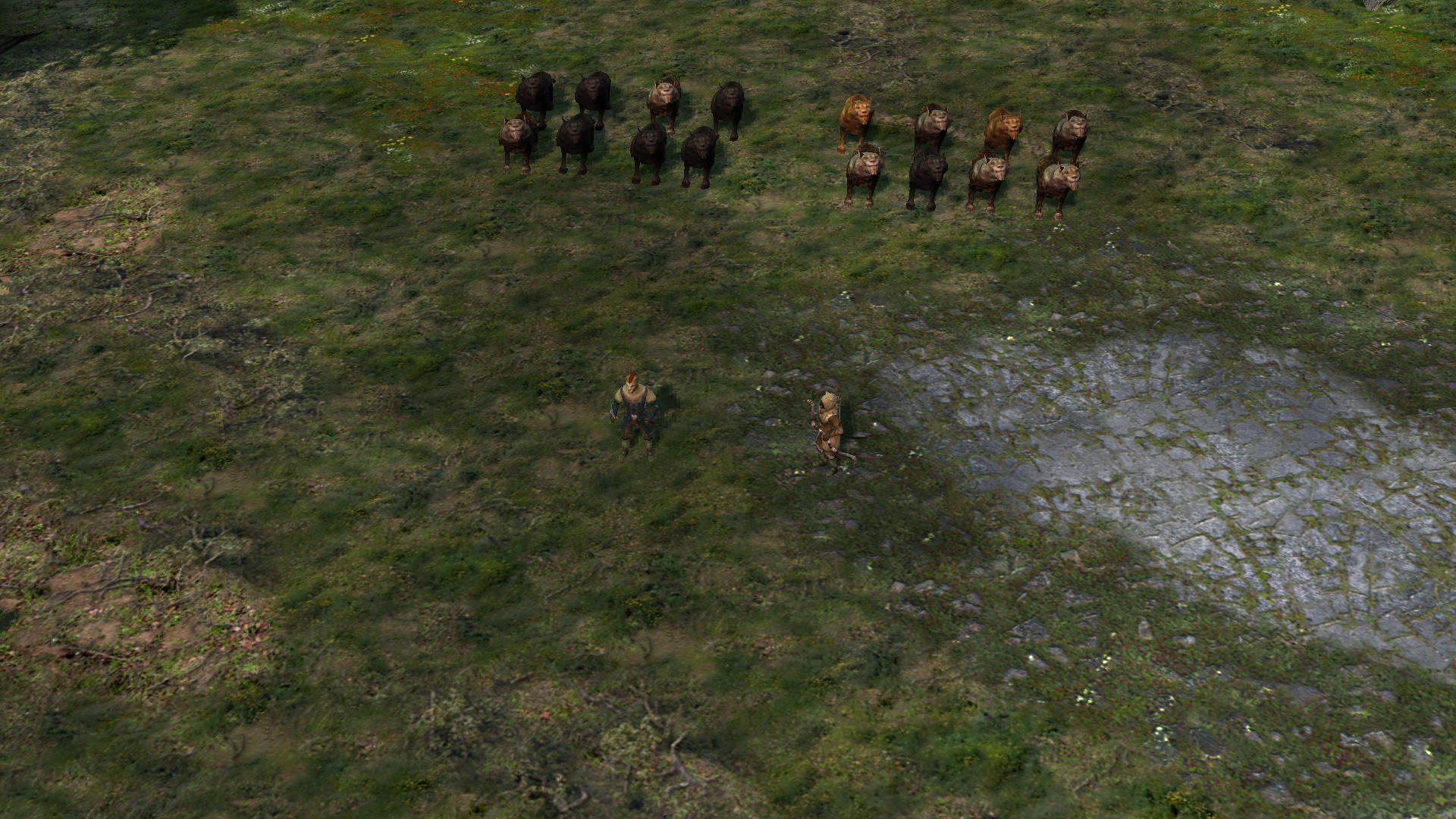 It is impossible to talk about Silvenar and the Green Lady, two Bosmer heroes in the Dominion roster, in separation from each other. Silvenar, who moves silently by himself, will be able to grant temporary invisibility to the selected allied unit, gives a leadership bonus to Valenwood archers and Elden Wood Warriors, and damage from his arrows will increase with level up. Green Lady, in turn, has a set of different abilities that enhance or heal neighboring units and heroes. In addition, when Silvenar and the Green Lady are close to each other, their Damage and Armor rates are increased by 20%. 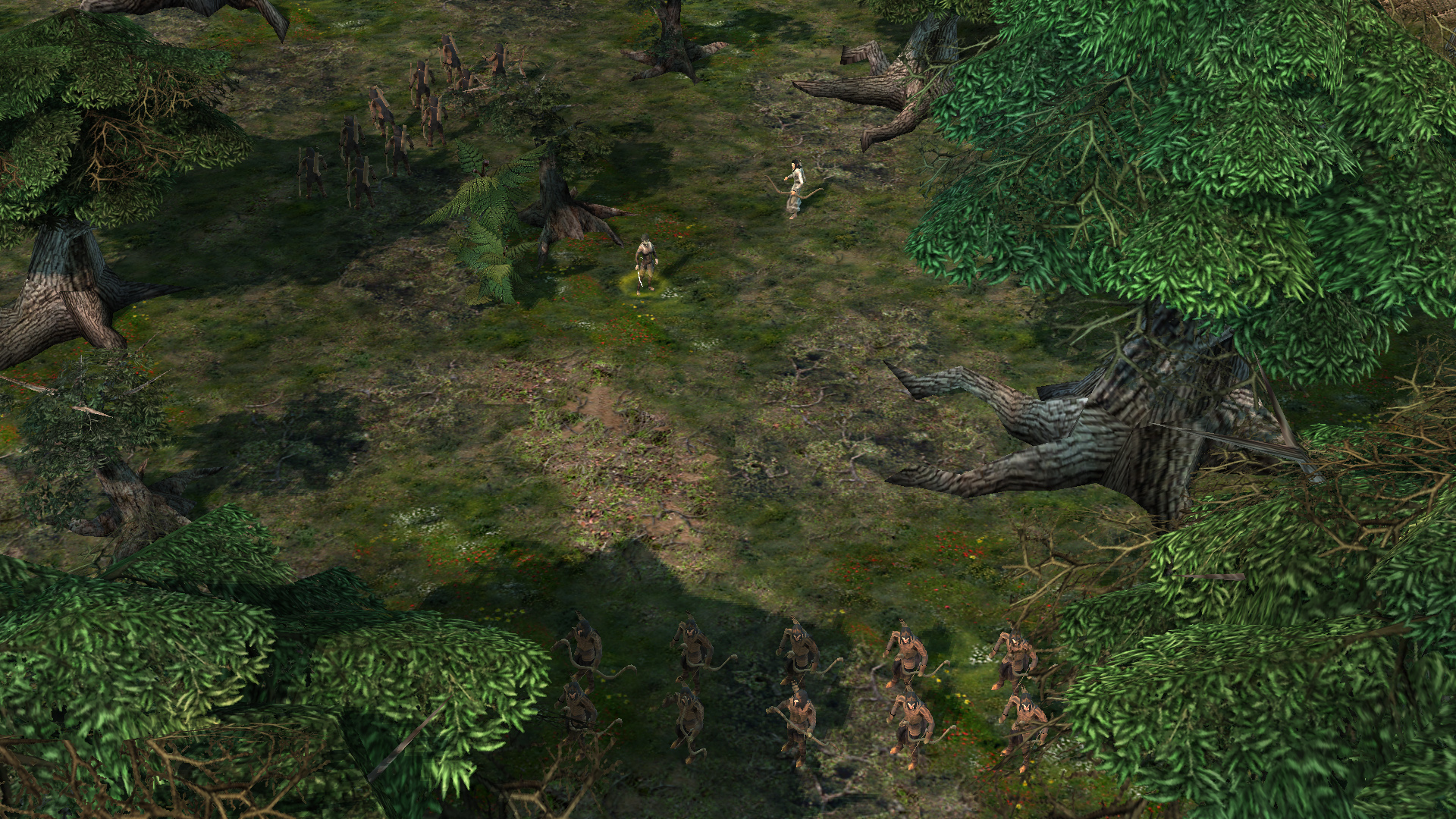 The fifth hero of the Dominion is the Altmeri warlord, warrior-mage Lord Naarifin. In addition to the high melee damage, Naarifin will also have the ability to throw a fireball at opponents, and spy selected area of the map for a while, all enemy units on which will fall into fear. In addition, Naarifin will be able to call on his loyal servant, dremora warrior called Reive, to aid him, as well as cast a powerful spell that, if used correctly, can give the player control of an army of ghosts for a while.

The sixth hero and faction leader is the Queen of Summerset Ayrenn. Able to fight both on foot and on horseback, she will be able to train selected allies, receive a temporary bonus to Damage and Armor, and give all Dominion units a leadership bonus. On top of that, by reaching level 9, Ayrenn will be able to summon three fully upgraded Dominion units to protect her, while all allied units near her will gain improved defensive capabilities for a short time.

And finally, the seventh hero of Dominion will be the famous wizard and founder of Mages Guild, Vanus Galerion. The set of his abilities will include the powerful spells of the schools of Destruction and Mysticism, as well as the ability to temporarily summon several powerful magicians from the Psijic Order to his aid. 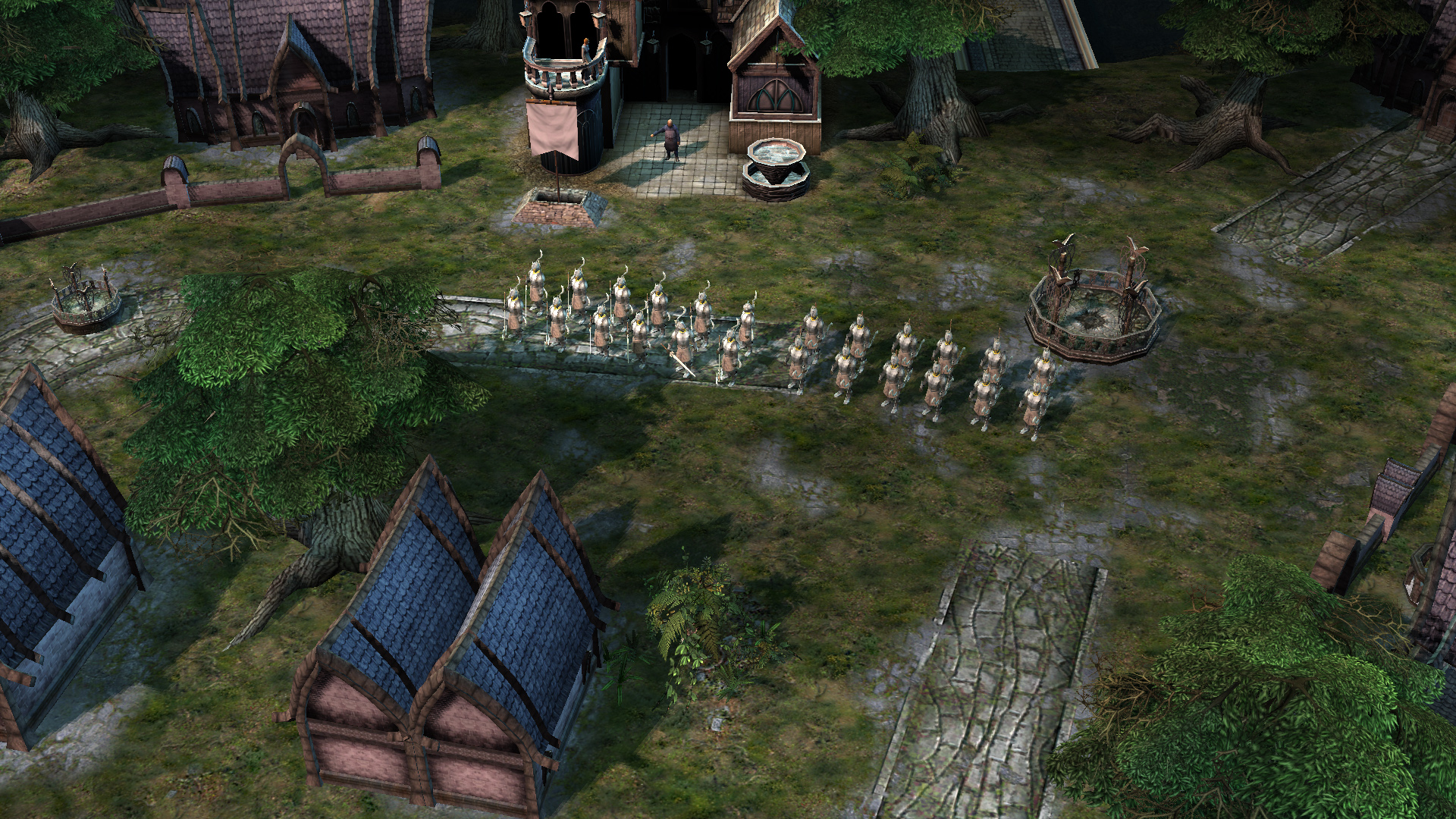 Also in the fortress, the player will be able to recruit the last hero unit of the Dominion - Welkynar. This hero-unit is limited to one entity on the battlefield and their recruitment will be available to players only after the construction of the final fortress upgrade - Chapter of Eton Nir. The main feature of Welkynar will be the ability to fight both on the ground and in the air, riding a battle gryphon.

n addition to the heroes from the fortress, through it’s spellbook powers Dominion will be able to summon for a short time ancient elven warriors - the Ayleid Sorcerer-king Umaril the Unfeathered and immortal king of the sea elves Orgnum, as well as the Daedric Prince Hircine alongside with his Wild Hunt, an army of dreadful horsemen. But we will talk about them in detail in our next article, which will be devoted to the Dominion spellbook.

That's all for now. If you have any questions or want to discuss our projects, you are welcome to our Discord server, where a full-fledged mod section has appeared from today. Also, if you are interested in our mods, you can support us on Patreon.

Yep, release date is amazing, but we can't tell it yet. I can only say that we hope to release it in next 2-3 months

But what of Fargoth? And his ring?

He will be 4 tier summoned hero in spellbook. Same for Tarhiel