This is short summary of progress we have made from releasing the 3.5 Open Beta. The Progress Report will be updated regularly, as we make new features available.

Posted by ACWDevelopmentTeam on Apr 8th, 2013

ok community, after a while here we bring you a new report on the progress made so far... We bring you two new features we have been working on:

The pictures you see are that of a CSA Louisiana Zouave Battalion. This is a new organization that made its appearance into the ACW mod for a first time. Its appearance is significant for several reasons. First of all, it spearheads the development of our idea on making all Zouave based units effective skirmishers. The Zouave units are now all company strength; meaning they have no more than 70 men. This put us in some sort of a tight spot; especially because of the fact that most of the US Zouave units were actually regiments. To solve that issue, we have decided to allow 1 company for zouaves that were only company size (such as CS Company D, Napoleon Grays, or US Irish Zouaves), 2 comapnies for units that were actually regiment size (most of US and some CS zouaves) and 3 companies for CSA Louisiana Zouave Battalion (picture above).

Second reason is that we have now made an effective way to use light infantry tactics. The button itself was reworked and the ability was renamed to: Take Cover; as we feel it fits better with this new system. The improvement is also made by making zouave companies use loose formation as default, while take cover ability does little in stretching their line, but it does allow them to fire while kneeling which provides them some resistance to enemy fire. Therefor, such a development really fits take cover better than light infantry doctrine naming. The zouave units are now your main skirmishing force, able to whitstand volleys from 2-3 enemy regiments (while in cover mode) and deal some (depending on distance etc) damage to their attacker. Their deployment also makes them conserve ammo better than normal line regiments, but their fire is more sporadic (or individual) although also more accurate (to some degree).

Third reason is that this companies are above average troops (although only company size) and can be real battle turners if used properly. Their good morale and ability to move faster over virtually any type of terrain makes them great hit and run, scout, picket and skirmishing force. They can handle themselves in a melee, but if they aren't supported they will get mauled by enemy (regiment size). Their main strength isn't in making bayonet charges, but paving the way for regular regiments to exploit any possible weakness in enemy's line. 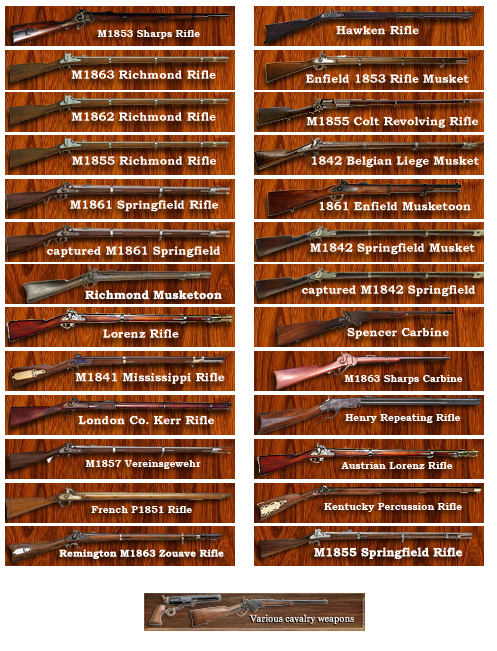 This is our new, and hopefully improved list of arms that will be used in ACW mod. As you can see there are almost all well known and some even not so well known weapons that were used on battlefields of ACW. We also added some that were specific for other nations player might encounter when playing this mod; such are Belgian 1842 Liege Musket, French P1851 Rifle and many others. Change isn't visual only. We continue with a standard we established: weapon shown on the unit card is weapon actually used by that unit. This means that effectively we will have each of these guns represented in tables, and hopefully (there is good chance for it) even in models which will be visible on battle map.

Player will have to pay some attention to the weapons his units use. Not paying attention could make him loose a battle or loose way more men than he hoped to. For example: CS Missouri and Tennessee Volunteers are the best volunteer units when it comes to morale. They out-class in this respect any Union Volunteer unit. But their high morale, will mean nothing or very little if they aren't used properly because their Union counterparts are usually armed with better weapons. This was all done in hope to bring to you more tactical demanding play. Demanding but still fun. At least we hope so.

This is it for today, do stay tuned as we now move to campaign changes which will give some features that weren't seen in this game before.

This is brilliant. I saw Part 1 and thought "Thats a neat feature," and then I saw Part 2. The firearms table is amazing and I can't wait to see the variety in the arms of the various regiments.

I'm really DYING for 3.6! You guys are doing a fantastic job! Keep the spirit high and keep on doing this masterwork :)