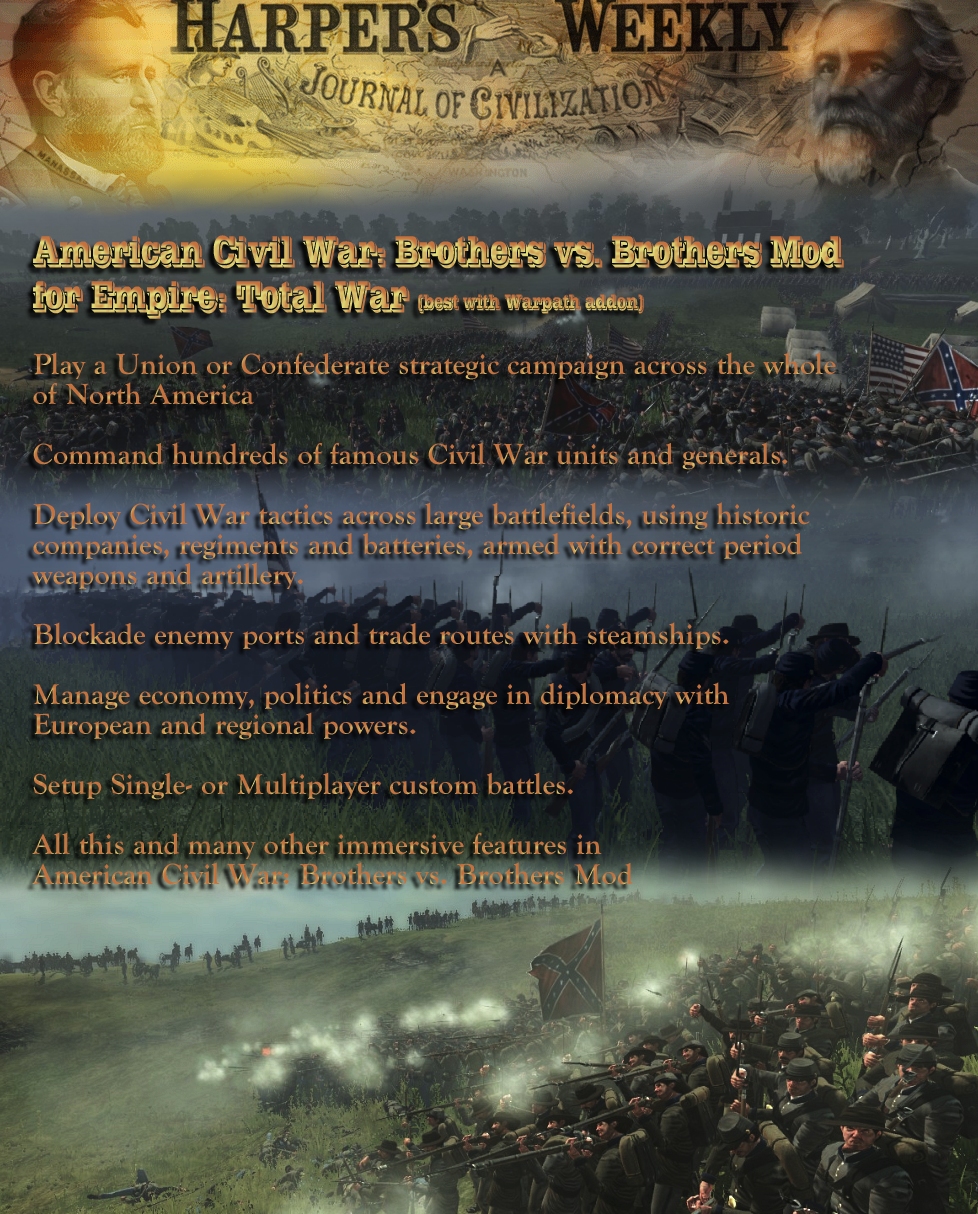 Visit our FORUM for latest screenshots, videos and info or enjoy the previews here. 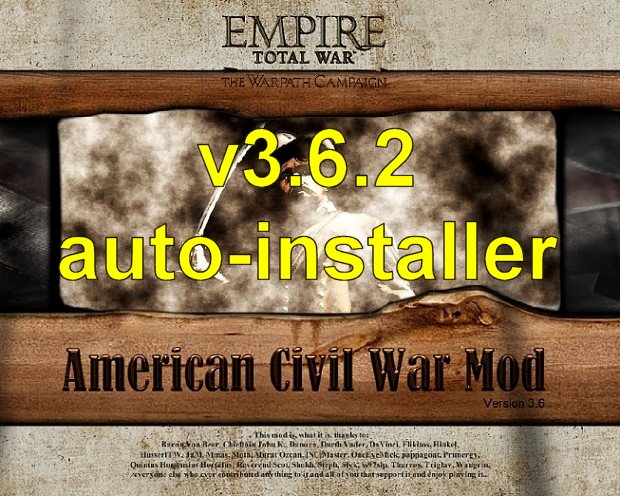 100% MONEY BACK GUARANTEE IF YOU'RE NOT HAPPY WITH THE MOD!

Installation:
1. Completely uninstall Empire and all mods
2. re-install Empire and Warpath, install no other mods
3. Download and extract 3.6.2 installer.
4. Run the installer and point it to your Empire folder (usually C:\Steam\steamapps\common\Empire Total War) and let it install.
That's it!

Launching:
1. Make sure Steam is running. Game will crash during launch if it's not.
2. Run ACW3 launcher.
3. Go to "Submods", unclick and reclick "Zone of Recruitment"
4. Select US or CS (if you launch US, you can't play CS campaign and the other way around).
5. Play game.

Notes:
1. Single battles and siege battles work fine.
2. Multiplayer battles work fine (both players need to launch the same, both as US or both as CS)
3. If you get battle crashes lower your graphics a bit and disable Steam Overlay.
4. Campaign works fine too, until the point when it can sometimes randomly crash. Why it randomly crashes nobody knows. Multiple saves might help you continue the campaign. Without Warpath the campaign in 3.6.2 will be all messed up.
5. For all additional questions, go to the forum, please. Tech questions in comments here will not be answered, sorry, since there's noone available to answer them.

PLEASE DON'T USE COMMENTS BELOW HERE FOR TECH SUPPORT QUESTIONS. THIS ISN'T THE PLACE TO ASK THEM AND THE DEVS WON'T BE ANSWERING THEM. PLEASE USE THE TECH SUPPORT FORUM INSTEAD.

This is short summary of progress we have made from releasing the 3.5 Open Beta. The Progress Report will be updated regularly, as we make new features...

The American Civil War Mod features one of the best Historical research Threads on the TWC Forums. The interface is made user friendly and easy to search...

This is 3.5 Open Beta for American Civli war: Brothers vs. Brothers mod

This is the latest patch for version 3.4 of ACW Brother vs. Brother mod for Empire Total War IMPORTANT: The mod WILL NOT run if you have ANY other mods...

This separate installer is used for installation of the ACW 3.4 Music Files that are needed to run the game.

This is the third edition of famous and well known American Civil War mod for Empire Total War game.

Only Civil War mod on any Total War with an actual campaign. Too bad its dead and many bugs were not able to be ironed out.. Crashes after like 10 turns in campaign, mostly in battles where you're actually having fun. Very disappointed. Tons of potential and hard work but they couldn't execute it to the full extent. Don't waste your time downloading this, guys. What's there is AMAZING (units, etc.) but it will inevitably stop working. Been dead for a while it seems. Guess I'll wait another 10 years for another Civil War mod:)

Its not dead, It still works for me.
Sorry if you don't know what I'm talking about, to my POV
dead mod means not working

I guess the other modder recreating the civil war mod is dead along with his mod.

Its not dead check twc

yeah, it was supposed to be released this month, but its gone

scammed people, took their money and ran. a shame. anyways, anyone got the password for the files?