This is a standalone fix for the George Romero Survival Horror Edition V9 mod. It contains every new feature and fixes for V9 for your convenience. Simple to use, grab this now and have fun! || The George Romero Riptide Mod was made in honor of George Romero, considered to be the "Father of Zombie Movies". This mod aims to replicate the behaviour of the Romero zombies, which means that zombies are mostly slow and can only be killed by destroying the brain. There are also other optional features included in this mod to satisfy the cravings of Dead Island players. The Walking Dead comics and tv series and even the zombie comedy Shaun of the Dead are two very well loved horror entertainment that closely follow the Romero style of zombies. Since the mod also aims to give the players a survival horror experience, the fighting system has been customized and you also have other optional choices to suit your needs, like being able to play with modern fast zombies and other settings.

Special Thanks to: Crixus Champion of Youtube for reporting bugs so I could fix them :)

Latest UPDATED V9 File Name: DIR_RomeroModV9SHEmay25.rar
The Original V9 File can be found here ->Moddb.com
You don't need to download the original V9 file to use this to play :)

This change in the fighting system also encourages different strategies when facing hordes of zombies. When just facing one or two zombies, it is very easy to kill them even with just a golf club or a paddle. Although a golf club is weak, all you have to do is kick a zombie down and smash its head. When zombies are on the ground, they become more vulnerable because gravity adds more power to your weapon as it comes smashing down towards their head.

Facing a big group of zombies is where the true challenge begins. You can't simply kick one down and freely smash its head in with your golf club without other zombies trying to eat you. You have to avoid getting surrounded, and you also have to control the situation by trying to put them down to the ground where they are most vulnerable. If there's too many zombies to handle, you might have to run for your life!

Different weapons provide you with different fighting strategies. Let's say instead of a golf club, you now have a sword like a katana. Since the sword is actually a weapon intended for killing and not recreational fun, it is naturally more effective in killing than a golf club. Even when faced with a big group of zombies, it is possible for you to cut their heads off even without kicking them down first. If you use a sledgehammer or something big and heavy, it also makes it easier to destroy a zombie's head without much effort.

Having a good mix of weapons can help a lot, especially when you're worried about your good weapon's durability. When faced with a non-threatening situation, you can simply use your golf club or another weak weapon to finish off a zombie. When faced with more threatening group of zombies, you can then use your better weapon to deal with the crowd.

Saving food for later use is one of the most important parts of your survival horror experience. You can now collect candy bars, chips, fruits, and drinks that will replenish your health whenever you need to.


* Please read the ReadMe.txt file to learn more about how to install this mod and to find out more information. The description has met the 10,000 character limit, thank you! * 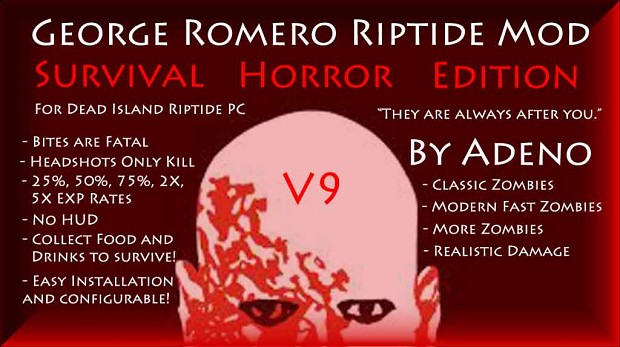