The experience of playing through Knee-Deep in the Dead is one that many gamers will never forget, but through the years the episode has become too easy for many to play through and enjoy the way they did the first time. Knee-Deep in ZDoom is an interpretation of Id Software's original groundbreaking production, Knee-Deep in the Dead. The team has focused on expanding the original episode by utilizing the power of Randy Heit's ZDoom port; adding new areas, features, and gameplay devices not possible under the original Doom engine. Knee-Deep in ZDoom is a new experience, but holds strong to the atmosphere of the original. Relive the fear. Relive the nightmare. Relive Phobos. 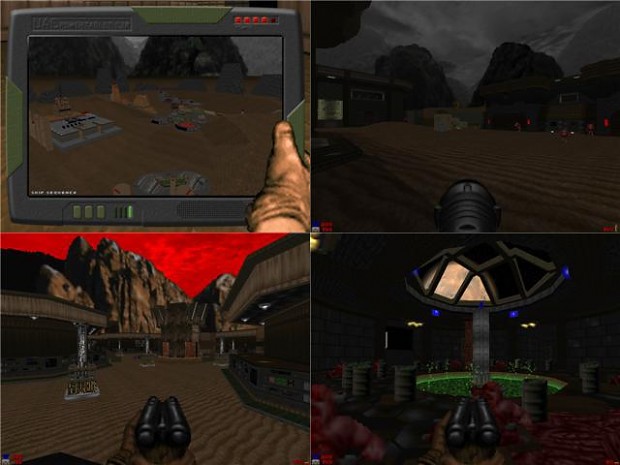 It's probably something to do with the Project Brutality+Doom Metal mod i tried to use it with?

I'm playing this fine with Project Brutality and over 20 other mods, so that's not an issue.
What I am having problems with is in map 5, Power Plant, I flip the switch that spawns enemies in the famous green slime ambush room and the game slows to a crawl. I dealt with the 1 frame every 5 seconds to get back to the spawn room from the slime but nothing was spawning! I turned down res to 640x480 and that only helped frame rate a little, still nothing spawning.
I'm not stuck, just wish I knew why this was happening. Guess I'm either clipping through a door tomorrow or turning god mode on and turning my sound and screen off tonight to see what happens...

Do not play with 20 mods. This game is not Skyrim. Especially do not play ZDoom map sets like this with gameplay mods, that is asking for trouble.

I was able to complete 7 missions using Brutal Doom mod, but in the 8th (Phobos Anomaly), there were supposed to be 4 Barons you are supposed to kill after which there is a Boss fight. But I can only see 2 Barons and the other 2 don't spawn, so the Boss doesn't spawn and I'm stuck at this point.... I am using the latest gzdoom. currently (2.1).

Hopefully he'll update it to work with BDV20 and Project Brutality

Will there be future Doom episodes remade in this style?

Top notch visuals & intro and the interactive features/intermission screen are both good, but the maps are too large and end up being labyrinthian (sadly the camera screens don't help much because of this). Too much artistic license has been taken with the original source material to the extent where rooms no longer resemble the original ones at all. In addition, many of the additional areas feel arbitrary and unnecessary and many of the new monsters stick out due to unthematic placement. Loads of locked doors have been inserted everywhere which painfully draws out game time. The gameplay of the original levels is smooth, fast and easy to follow, but now it's confusing and filled with backtracking and whilst the intermission screen is really fancy, honestly the original 2D pixel art looks more appealing. Overall, I think KDIZD feels like a showcase - it's very pretty and is an amazing show of graphical and interactive features, but it doesn't play well, it fails to improve upon the original levels in meaningful ways and ironically, it doesn't have much of Doom's atmosphere.

So I've played through all of it and have changed my opinion somewhat. Most of the issues present differ considerably from map to map. Some are too difficult to navigate, some feature way too much backtracking and some hide essential passages/buttons too well. Others are fine and don't tend to have as many of these issues if at all. The introduction and placement of monsters though, is a recurring problem throughout KDIZD. A lot of them haven't been introduced/placed in a way which fits and hence they stand out a lot. Because of this, KDIZD is a lot like a monster zoo where you can find anything anywhere. The new level design is a lot prettier and some of the areas are fun to explore (especially the entryways and outdoors), but many of the new areas do still feel unnecessary and do little besides extending game time. The intermission screen is good and I like the additional features, but I still maintain that the 2D map art looked more appealing (and it's infinitely better than no map at all!). Given the disparity in the map design, it comes as no surprise that each map was developed by multiple people. As a reinterpretation, KDIZD doesn't live up to the original as it often loses the identity of the original levels, but as a set of entirely new levels, KDIZD fares better.

There are definitely other options if you are looking for something that enhances the original maps but sticks closer to them. The whole point of KDiZD is to be a total reimagining that shows off the capabilities of what the source ports can do, back when the source ports were newer. For example, you might prefer the original map, but that's not the point, the fact that they were able to create the new map in ZDoom is the whole point of having it in there. Its also supposed to be an almost unrecognizable recreation of levels, as it's for people who have played Knee Deep many many times. It's more of a recreation of Phobos with modern game design and level design principles. It also mixes really well with Brutal Doom or Project Brutality, not really with vanilla gameplay IMO.

Personally, I feel like KDiZD, along with other wads like Exterminations Day, Eviternity, Torment and Torture, Ultimate Doom 2, etc, are more what Doom would have been like if it had been made a few years later in the build engine. The levels are way less abstract and more grounded in reality, superfluous areas included in that way of thinking, there are more "Immersive". To me, it feels like I'm exploring an actual complex on Phobos. I personally disagree about the maps feeling labyrinthian, I think all the new areas are distinct enough and I barely ever find myself opening the map. As opposed to mods that just add new areas for new area's sake with no real visual flair or theme to them. I feel like KDiZD is actually one of the best level expansion wads in that regard.

Personally a big reason I enjoy Doom, Build, and Quake engine games, and really any game for that matter, is for the exploration as much as the combat. It's pretty telling that Hexen, the only Doom engine game to use the hub design, is one of my favorites. KDiZD is amazing in that regard, it takes the approach that each area you discover should be just as interesting as what you find there. Whereas the original maps secret and optional areas are really only interesting because of what items you find. Finding every item and killing every enemy is fun, but if each area is interesting to explore and unique from the last that makes for an immensely satisfying experience to me.

The original maps feel more like a series of themed video game rooms designed for no other purpose than to house enemies to kill and items to pick up. It's much more arcade-like, more video-gamey if you will. Even Knee Deep which is arguably the best-designed episode of Doom, never really transcends the barrier between video game level and believable environment. Despite the fact that the map shows you traveling to different facilities, none of them feel like they are designed around the purpose that the location is meant to serve. For me, KDiZD accomplishes that goal similarly to how Doom64 pulled it off later on. So I think it comes down to personal experience, how you see and play Doom in general.

TLDR - I basically want Doom to be immersive and draw me into its world, like for example, Half-Life. The original maps are too video-gamey for me to get sucked into it as anything other than an arcade-like experience. However, KDiZD elicits that feeling in me using a combination of two things:
-Visually appealing and well-themed area design
-Grounded and realistic yet gameplay functional overall map/level design.

Thanks for the comment, I appreciate it. I guess I'm one of those people who prefer faster, more arcade-style maps rather than ones which are more about the exploration and discovery. I do still like exploration in Doom, but only if it progresses the player through the level. I don't like too many superfluous areas and I'm not so keen on discovery/puzzles (I don't fancy spending my time analysing every wall or corner). I like the sense of pacing and flow that I get from simpler layouts and conspicuous buttons, doors, passages etc. I do like exploration/discovery a lot, but I play other games for this.

I don't think grouping KDiZD and Eviternity is quite right though, since Eviternity has a simpler layout and rarely features superfluous rooms. Eviternity's large, but I can always tell where I need to go in that. KDiZD has unique, detailed and distinctive areas too, but there are some buttons and passageways which are surprisingly well-hidden, even though these are needed to progress the game. I had trouble finding these, but none in Eviternity.

This is a must-play, as are Z-Pack, and Z-Doom Community Project 1 and 2.

its supposed to be played with jumping?

Playing on VR here, everything worked great for the first level but then it just dumps me off on the e1m1 of vanilla DOOM for some reason. Very impressed and look forward to trying out the full episode.