Previously in WiC and older versions of our mod, a support player's air defense mission was always to try to "contain" air activity and always react to air player, often fighting on his terms.

Posted by roycewicz on Feb 11th, 2011 - Intermediate Other

In the new version of MW Mod, things are changing.

The very moment that air player starts throwing cruise missiles, things will begin to get progressively worse for your team. As your front-line continues to take hit from cruise missiles, air players will get more TA points and will eventually begin employing ballistic missiles to add to your misery. Because of this, support player's new revised mission is no longer about containing air activity.

Your new mission is to actively disrupt and aggressively ruin all hostile air activity, right from the get go at the moment game starts. You must deny air player the ability to get TA points -- make him pay dearly for every 1 TA point he gains. This aggressive air defense posture will allow your team to delay the inevitable cruise missile spam for as long as possible, resulting in improved freedom of maneuver for your ground forces.

Defensive operations occur generally in domination maps that are relatively small to moderate in size -- this includes pretty much most, if not all, of Massive's vanilla World in Conflict maps.

Primary Target Line (PTL) is direction where your Patriot battery is facing toward the expected air threat, as well as effective range of your weapon to attack the incoming threat.

Because Patriot is a sectored system, the PTL is more significant than other systems. Conceptually, the fire units can be oriented so that their PTLs are convergent, divergent, or parallel.

Here is an example of two Patriot batteries positioned to form up a Divergent PTL in do_Fjord map: 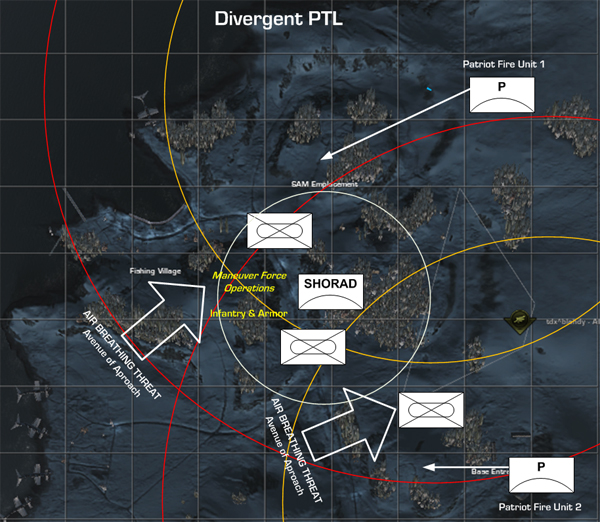 In maps like Fjord where there is a large patch of impassable terrain between air defenses and front line maneuver forces, you want to expand your air defense coverage to as large areas as possible.

Divergent PTLs allow the Patriot battalion to cover pretty much the entire map, with two batteries positioned at sides (in this instance, top and bottom) on good terrain (good terrain means, do not put your battery behind a treeline, hill or building where radar vision is interrupted).

However, the divergent PTL's benefits occur at the expense of concentration of firepower and it makes you more vulnerable against electronic countermeasures. But in any case, in maps like Fjord, Riverbed, etc where there is huge patch of impassable terrain for much of the map, you do not really have any choice but to employ Divergent PTL -- you just have to cover as much terrain as possible.

To offset the reduced firepower, you should use your remaining reinforcement points to purchase Short Range Air Defense Systems (SHORAD), such as Avenger SAM, and push it out to the front-line where your maneuver forces are operating, or request an infantry player to buy an anti-air infantry equipped with Stinger MANPAD to hide inside forest. This will provide short range point defense in the event that Patriot coverage becomes insufficient.

Patriot fires are extremely effective against air breathing threats (ABTs) when convergent PTL is used.
Here is an example of Convergent PTL setup in do_Hometown: 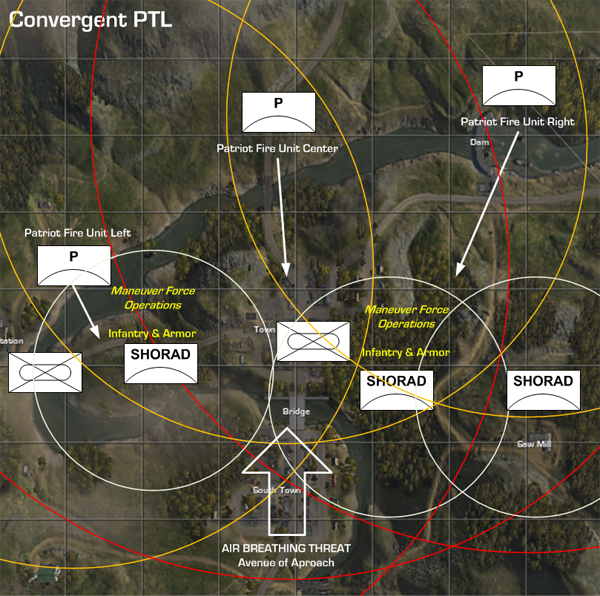 In case of Convergent PTL employment, support player deploys 3 Patriot batteries spread out at left, center and right sides of the map. This creates a converged air defense umbrella, where each battery's fire range and PTL sector radius totally overlap between each other.

When enemy aircraft approaches any part of the defended sector, Convergent PTL maximizes concentration of firepower. Even in the event that one of the Patriot batteries is destroyed or disabled, the Convergent PTL design ensures that there are two other batteries still servicing the overlapped area to provided mutual fire support and continuity in air defense coverage. 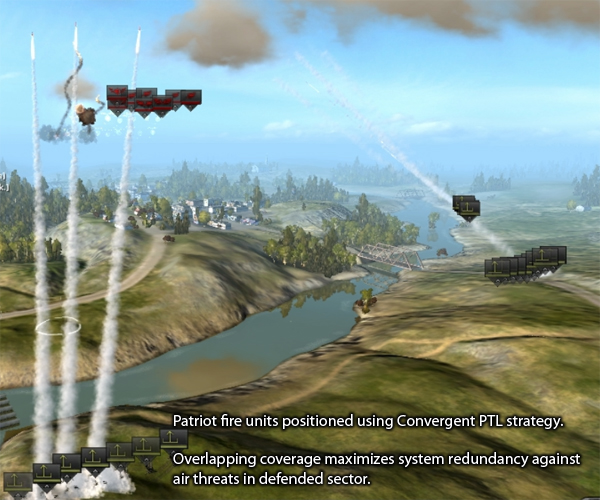 Convergent PTL's firepower is so immense that the support player doesn't even need to bother with SHORAD units of his own. Instead, talk to your infantry and armor players to deploy a SHORAD unit or two of their own to put at the front line. Convergent PTL Patriot coverage combined with anti-air infantry's SHORAD coverage at the front line can literally disrupt enemy air operations to the point of panic.

Convergent PTL is ideal for maps where command points are relatively close between each other, and where much of front line maneuver force operations will be conducted at center of the map. A clearly defined air defense area in maps like Hometown, Xmas, Studio, etc allow you to deploy Convergent PTL.

Offensive operations are very useful in large maps (such as mde_Caucasus and La Campana) where air defense coverage must be afforded to forces that are extended out in the front line.

For a number of large maps, you may need to be creative and combine tactics from both Offensive and Defensive Operations to create a best balanced approach -- this all depends on the skill level of the opposing air player of course.

In maps that require constant mobility for maneuver forces, such as assault maps like Airbase, your Patriot batteries also have to keep up with moving maneuver forces to provide continued air defense coverage.

To do a leapfrog, get 2 Patriot batteries. As soon as they arrive, immediately activate the first battery at your spawn zone. This will provide air defense coverage during initial lodgment operation, allowing your infantry and armor groups to make the initial push to secure the front line.

As the enemy defenses begin to crumble and your ground forces have captured the first set of command points, move your 2nd inactive Patriot battery forward and then activate it once it is at the first command point. Then, de-activate your first battery and move it forward. 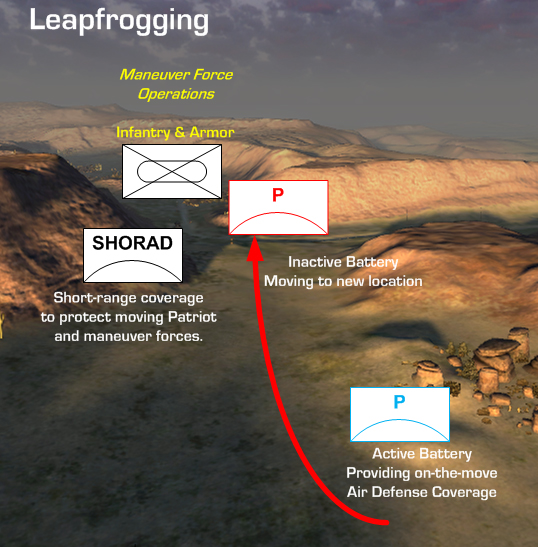 This leapfrogging rotation allows you to maintain constant air defense coverage for maneuver forces while they are on the move. This is a very ideal strategy for assault maps.

Be sure to purchase at least 1 SHORAD unit to protect your Patriot battery, as it is extremely vulnerable to air threats when it is moving.

Emission Control (EMCON) can be useful to fight against a non-AI air player, especially if a friend of yours is going air against you, where he already knows your common support strategy in game.

When your Patriot battery is operating, every enemy aircraft will know that there is a Patriot SAM site out there somewhere, because they will receive radar warning as they move.

To maximize the element of surprise against air players, place your Patriot batteries on Hold-Fire. By holding fire, radar shuts off and stops radiating and air players will no longer receive any radar warning.

Once the air player walks well into the effective range of your SAM, dis-engage Hold Fire on your battery. Immediately, the radar will come to life, begin calculating firing solution and launch missiles against the air player. Because he is already deep inside your air defense sector, even if he goes evasive, it will be extremely difficult for him to escape unscathed. He will pay dearly for walking into your No Escape Zone.

Note that placing your batteries into hold-fire for EMCON Silent operation will make you completely vulnerable to enemy tactical ballistic missiles (TBMs) and cruise missiles. Because TBM is a hypersonic business, you need every millisecond of reaction time to fight it off. So if you are expecting an enemy TBM threat, at least one of your batteries have to be continuously radiating to detect the incoming TBM launch.

Here is an example of a balanced approach that uses combination of EMCON to reduce the radar-warning footprint against aircraft, but to provide decent effectiveness against TBM threats: 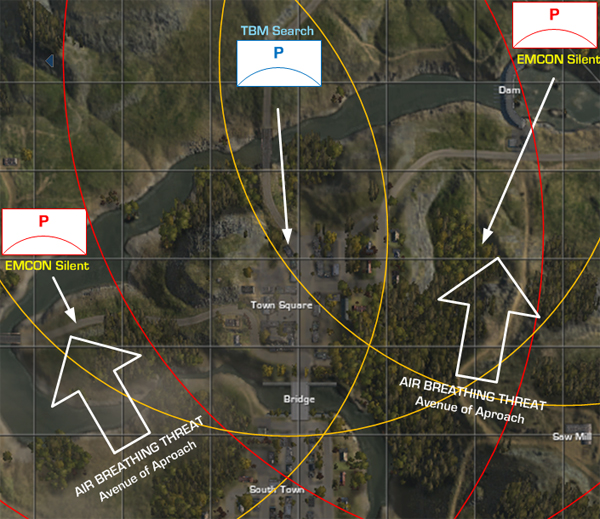 The two batteries at the sides of the map are holding-fire, while only the center battery is radiating to detect TBMs. This reduces the detection footprint by enemy aircraft to only the center area of the map.

This kind of EMCON allows you to force the air player to keep guessing as to where your air defense assets are. The more you can outsmart him, the better.

Thanks this is really helpful :)

Hopefully with this you will be able to get a head start of how to use the Support Role effectively in Beta 6.

It's very different from Beta 4 (the version you play).

Not as of now (atleast yet).

I'd like to thank you for this Awesome mod

but I was Wondering if it's possible to change the formation of heavy SAMs or select a single heavy SAM to control.