This tutorial covers a simple set-up in which a sword/axe can be pulled from the stomach of a viking and the viking will scream and squirm. Take a look!

This Tutorial will assume that you are familar with Special Event Rune's and that you have a working knowledge of the RuneED. If you have not read Dave Halsted's tutorial on triggers, I suggest you do so now.

This tutorial will only cover a simple set-up in which a sword/axe can be pulled from the stomach of a viking and the viking will scream and squirm. I hope that it gets your imagination working, as its quite interesting to pull a sword from a viking, better than the ground I'd say.

The Setup
The actual mechanism is pretty simple, and doesn't take long to set up at all, the power of the specialeventrune's really are shown here.

I start off by placing a crucifix, this isn't necessary, but I like it. 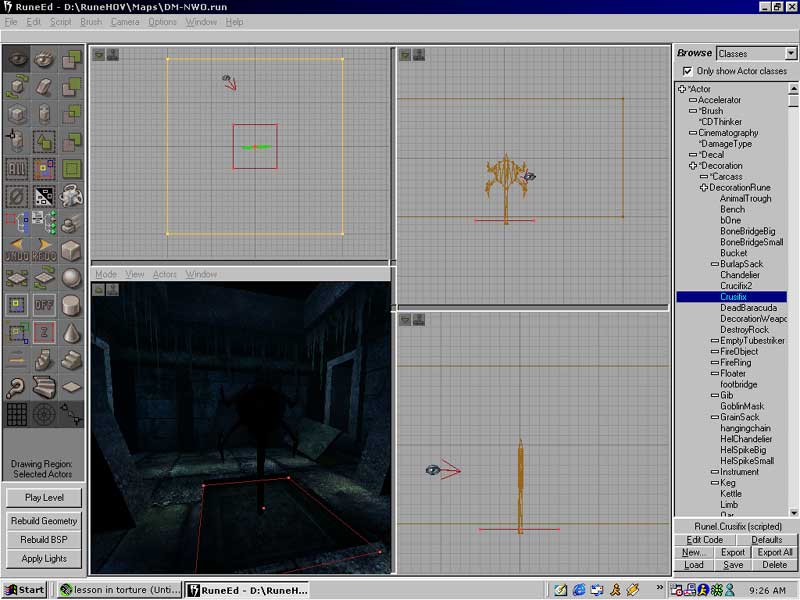 Next I'll just place a viking, lining him up with where he should be facing and the proper height, this could take some practice to get right, see how I hve done it: 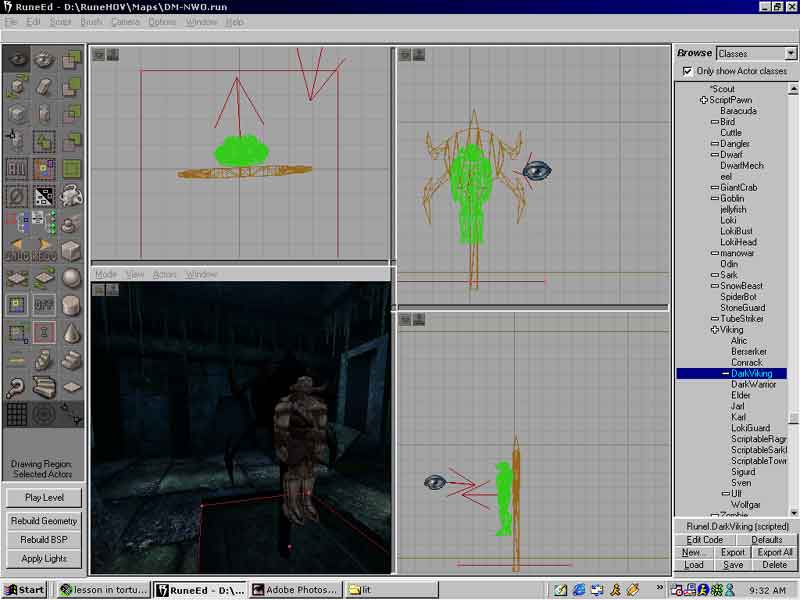 The next bit is the AI that we'll have to give this creature. Right-Click on the viking and expand the branch AI. the very first thing should be AttitudeToPlayer. Set this to ATTITUDE_Ignore, overwise he'll jump off the crucifix when a player comes by and attack.

Next expand the branch Pawn. In here you will see Health and MaxHealth, I set these both to 10000, that way the player can't kill them in the event of a single round, and if they do, they deserve the kill. This is also important because the trigger we use will damage the viking, and he'd only last 3 or for weapon draws at normal health. 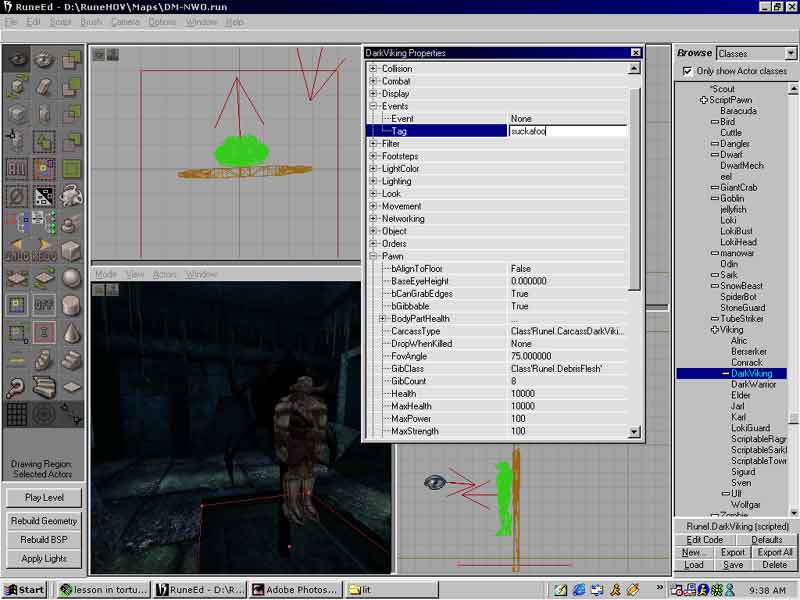 Next go to object, and set the initialstate of the viking to crucified.

Puttin' on the Hurt

Now lets have some fun. It's time to make this sucka pay, not that when placing the viking, you should enter a tag name. In the above pic, you can see I have named my hapless victim: suckafoo.

First thing first, place your weapon, Line it up, get it in his gut, good and hard, I'm using the DwarfBattleAxe. Give you weapon an event name. This event name will be the tag of both SER's(SpecialEventRune's) that you're going to use. I'll use 'ouch'.

Set your first SER, set the tag name to ouch. Expand object and set the initialstate to damageobject.

Next expand the SpecialEvent branch, you will set the damage number, use 50, it has to be enough for the pawn to enter a damage state, 50 is good. Fill in the objectTag with the Tag of the viking, in my case I add 'suckafoo'. It
should look something like this. 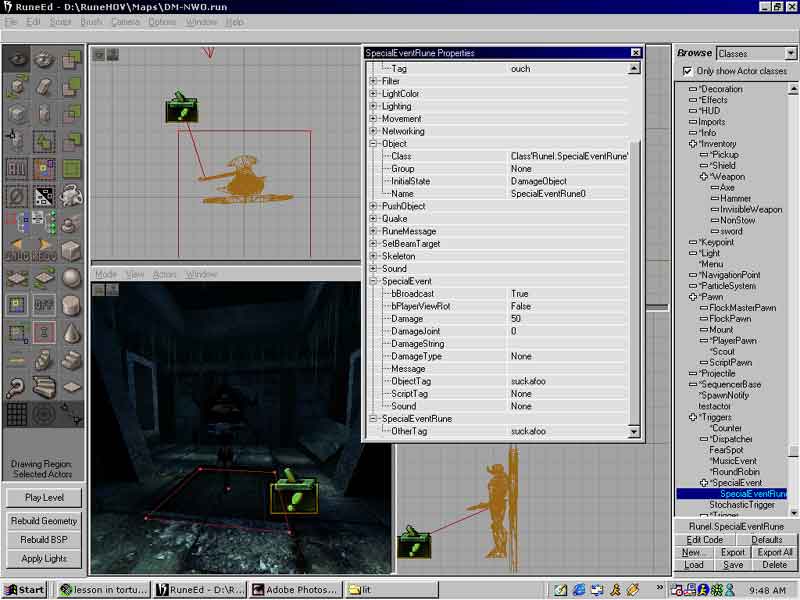 I also add suckafoo to the event tag of the SER, I'm not sure if you need one and not the other, but I always do both, so it doesn't really matter, feel free to enlighten me.

Next you'll have to set a soundeffect, the viking won't scream, or make any noise for that matter, unless you do. Set another SER, make the tag ouch once more. This time expand the Object branch and set initialstate to playsoundeffect, use that one and not the other sound ones. Use a viking hit sound from the Creatures sound package. You'll set the sound under SpecialEvent>sound. 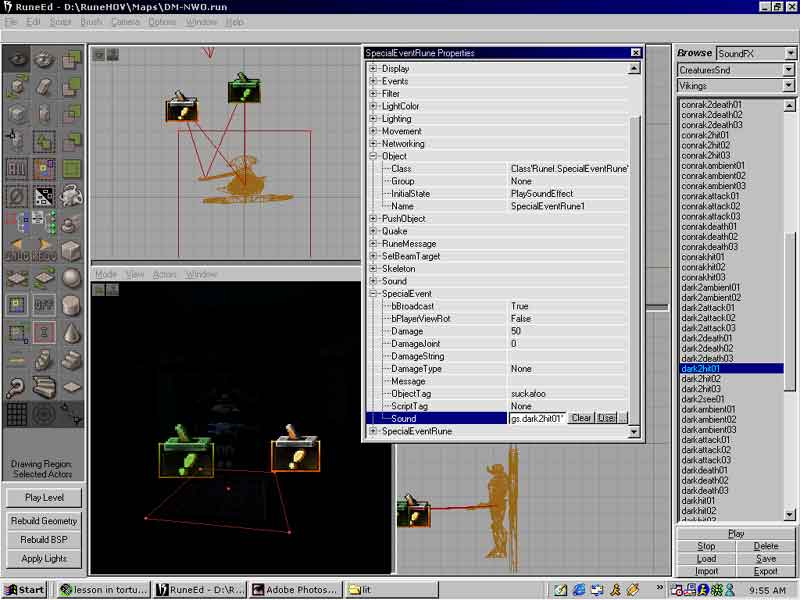 Test it out. It should work fine.