In this article we will discuss 'What is new reality?'. If there is a danger of loosing control and we can be sucked to a new world without our consent or to our end, let's better see with what we are dealing?

Simulation and Simulacra - Faking the reality

In previous articles we have discussed 'possibility' of the other side. Another world, dematerialized, stripped of old meanings and probably morality, global - but anonymous in sphere of physical contact. A global paranoia - as tries to tell us Philip K. Dick with a hand with David Cronenberg - mass hallucination.

But actually, we need to be little bit more specific. Can we translate this 'prophecies' into a more detailed view?

This new reality, if we want to enter it, and see for ourselves, is elusive. Compare it to a invisible to human eye ghost. To see it, we need special tools.

First, let's learn, what we are looking for? With this question, we have to visit Jean Baudrilliard author of Simulacra and simulation. Baudrilliards depicts our current reality as a world that is being replaced by a simulacra. So what is simulacrum?

In one sentence: Simulacrum is a simulation of fake, usually this simulation is more vibrant than original.

For instance, Baudrilliard calls Disneyworld as a perfect example of simulacrum. It is a simulation of a world that does not really exist, there is no Disney-country, or state, yet it has representation that presents reality as better, more beautiful, utopian. You can extrapolate this concept to any part of our 'digital'life. For instance we have more 'friends' than ever, but some of them we haven't even met in reality. Commercials present their products as better that they are (I was a photographer for over 13 years, I can tell you that), magazines present celebrities as uber-mensch even if they fail, their failure are epic and so on.

If you follow that lead it is easy to see that within a couple of decades we just have undergone one digital revolution and we are at the beginning of next one. Industrial revolution last circa 80 years, so yes, world is going faster and faster.

While there are artists searching for the answer about possibility and definition of reality, there are others who rather focus on our own surroundings. Now, creators like David Lynch, had their own part in global discussion in culture about perception. Instead of asking questions, David Lynch is rather playing with it.

What Harrison Ford meant to Blade Runner, James Woods to Videodrome, that exactly meant Dennis Hopper to Blue Velvet. I like him for Easy Rider (another movie about breaking reality btw), but for what he has done as an actor in Blue Velvet I will respect and remember him forever.

A unique Hopper's creation in Blue Velvet, was also possible thanks to Lynch, naturally, too. Hopper plays a mysterious criminal. A symbolic figure, representing darkest, deepest danger from evil, you might call him a devil. Devil is a common concept for Lynch in general - a small, tiny man, sometimes bald, with a very pale face. He was in Twin Peaks, he is also important figure in Lynche's pastiche of a Doctor Faustus tragedy - or rather Goethe's play - Lost Highway.

Going back to character played by Hopper. He is The Devil, but he also represents danger and hunger for thrill and excitement. During whole movie Frank Booth keeps in hand a breathing mask with plastic wire. This wire is not particularly attached to anything - it is connected to whole reality. And Hopper breathing through mask is sucking-in reality to enhance experience. 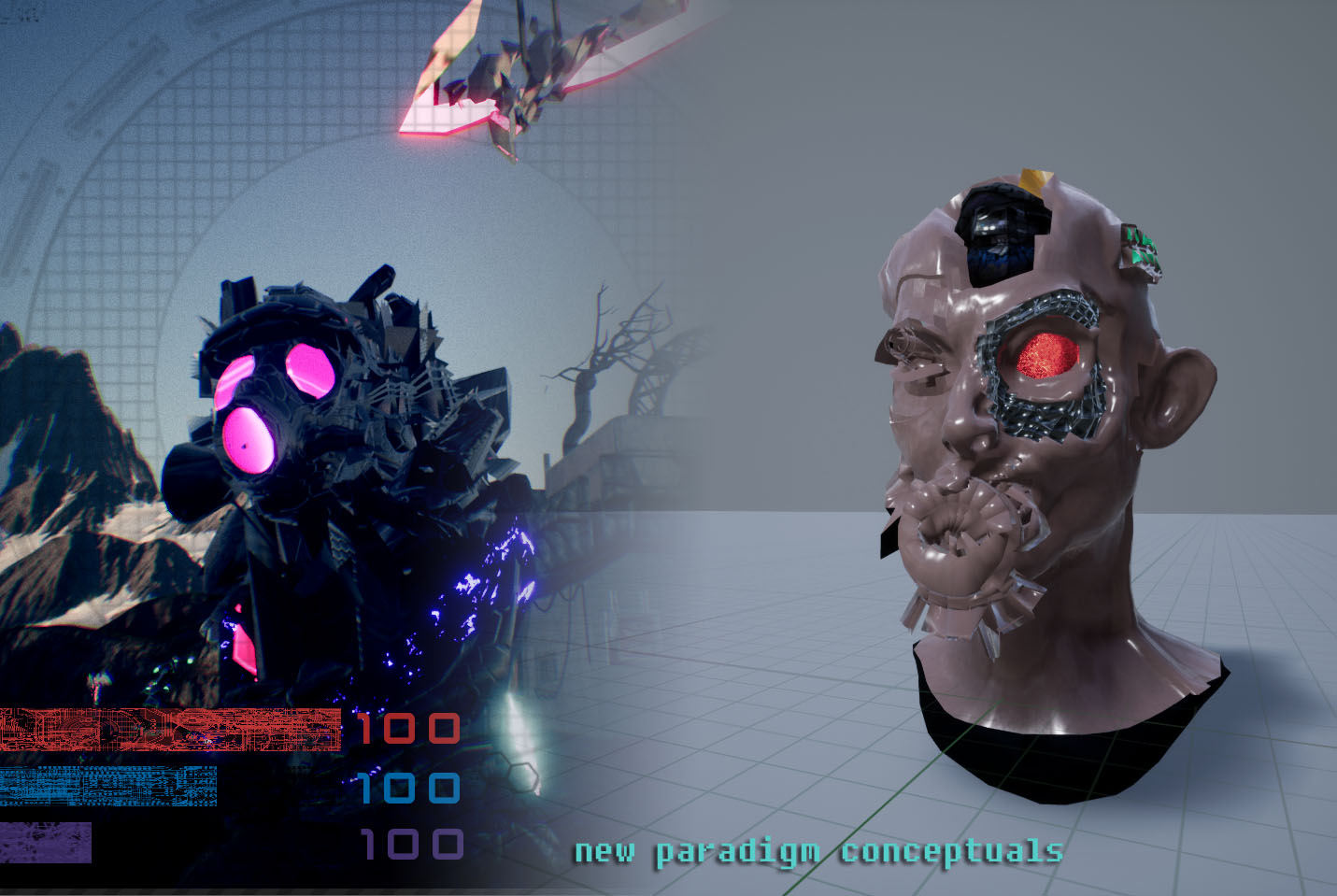 What if all you have is mask? new paradigm pictures

If you ever played Paradigm Worlds you have probably realized that I have an unhealthy obsession about masks. Lots of creatures wears mask, gasmasks, they have some futuristic looking VR-like-devices. These symbolize two concepts:

If you managed to get so far (this article isn't easiest to read) than it might be that names of movies and artist made you curious. Maybe you would like to know some others. Here is short list, a private hall of fame:

Question - about reality - was asked by many unique directors, like:

I did not mention any name that inspired visual side of Paradigm, reality, altered states. There will come time for that too, but for now I should mention at least: Giger [art], Beksinski [art], and naturally years spent with various games.

These artists work is a core of Paradigm Worlds in that sense that it cannot be seen in any particular feature, or single mechanic - they rather inspired whole philosophic paradigm.