Everything you wanted to know... Actually i'm recreating the tactical guide for mechcommander beginners and players. Since NoGutsNoGalaxy.net is lost - the only copy of information seems to be the one on my personal backup. I upload the information with some cosmetical redesign here on ModDB. This is Part XII of the MechCommander/MC Beginner's Tactical Guide:

Everything you wanted to know...

Need a bit of help waging war against the Clan? If you do you're in luck, as Andrew Wright explains how to get the most out of your Mechs.

MechCommander is a blistering real-time combat game in which you have to complete five operations, each one of which has six separate missions. You should find that them simple to start off with, but be warned - they gradually get harder. A run-through of the 30 missions would leave us little space for anything else, so instead here are the finer points of Mech combat - after that you're on your own!
To wage a successful campaign against the Clan you'll have to plan your missions carefully, and that includes picking the right Mech for the job. You start the game with two Commandos, which are cheap scout Mechs. They're best with an LRM pack or two so they can stand off and snipe at turrets or join in firefights from a safe distance. Add lightweight SRMs or lasers for close defence. Replace them as soon as you can.
Firestarters are better armoured, better equipped and just as fast as Commandos. You automatically start off with an extra weapons version that has a handy PPC.

Ravens are the best light Mechs - it's possible to recover one, a Raven-W, in Op 1 mission 3. Its sensors are well worth having but the default weapon load needs beefing up with an extra laser or two in place of the SRMs and perhaps an LRM pack.

You can salvage a Hollander II in mission 2 if you're slow to get to the exit point. It's basically a one-weapon platform and that's one thing you can't afford to have, especially when it takes up 45 tons of dropship space. When the Gauss rifle runs out it's all but useless, so replace it with a PPC or large laser and extra short-range weapons.

Slow and well-armoured, the Hunchback also relies on one weapon, the heavy autocannon. Rip it out, pack it with short-range weapons and treat it as a close-combat Mech, perhaps adding a medium- or long-range weapon for good measure. 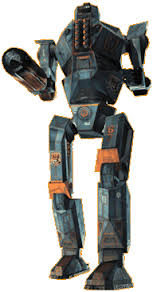 The Centurion is usually available for purchase after the first mission and it's well worth having all the way through the campaign. Consider removing the ammo-hungry autocannon, though, and add an energy weapon or two so it remains effective throughout each mission. 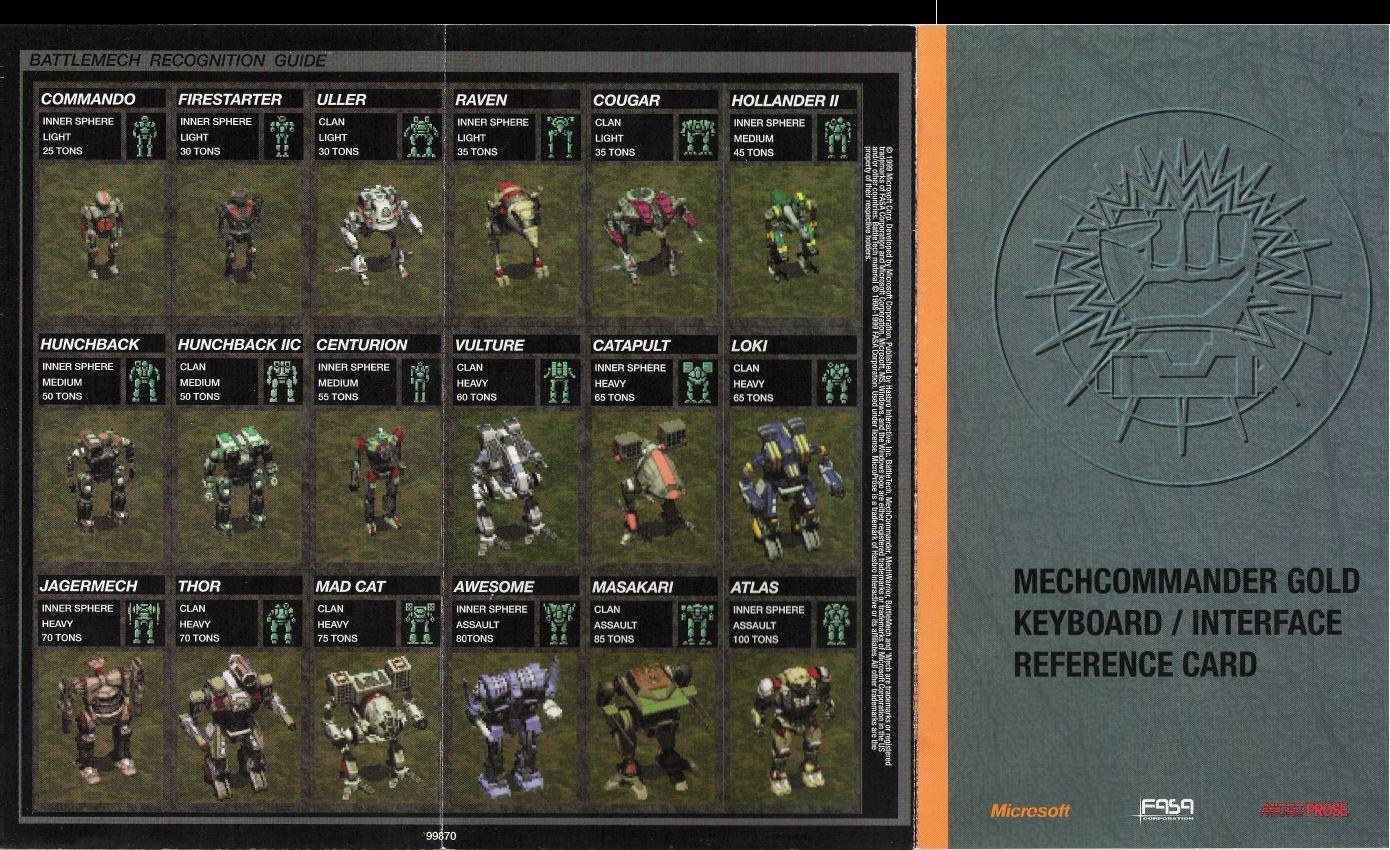 Of the remaining Inner Sphere Mechs, the Catapult, Jagermech and Awesome are more flexible and can be used in any role, with good armour, adequate speed and lots of firepower. A Catapult makes a good fire-support platform and it can slug it out in the front line if needed, but only the Awesome is really worth buying. Its massive 50-odd tons of weapon space and default load - three PPCs - can reduce almost any Mech to ruin in no time. You can't use the Atlas on some missions because it takes up too much dropship space - only consider buying one if you have spare cash or you haven't salvaged anyheavy Clan Mechs.

Each mission has two distinct phases - planning and execution - but the two are inextricably linked. What you choose to deploy before you land will affect the way you fight any battles on the ground...

There are no hard and fast rules for weapons. You might prefer to fight more battles from long range, or to get in close and slug it out quickly. You could also mix and match with both long- and short-range weapons, or give some Mechs a stand-off role and others an up-front one. 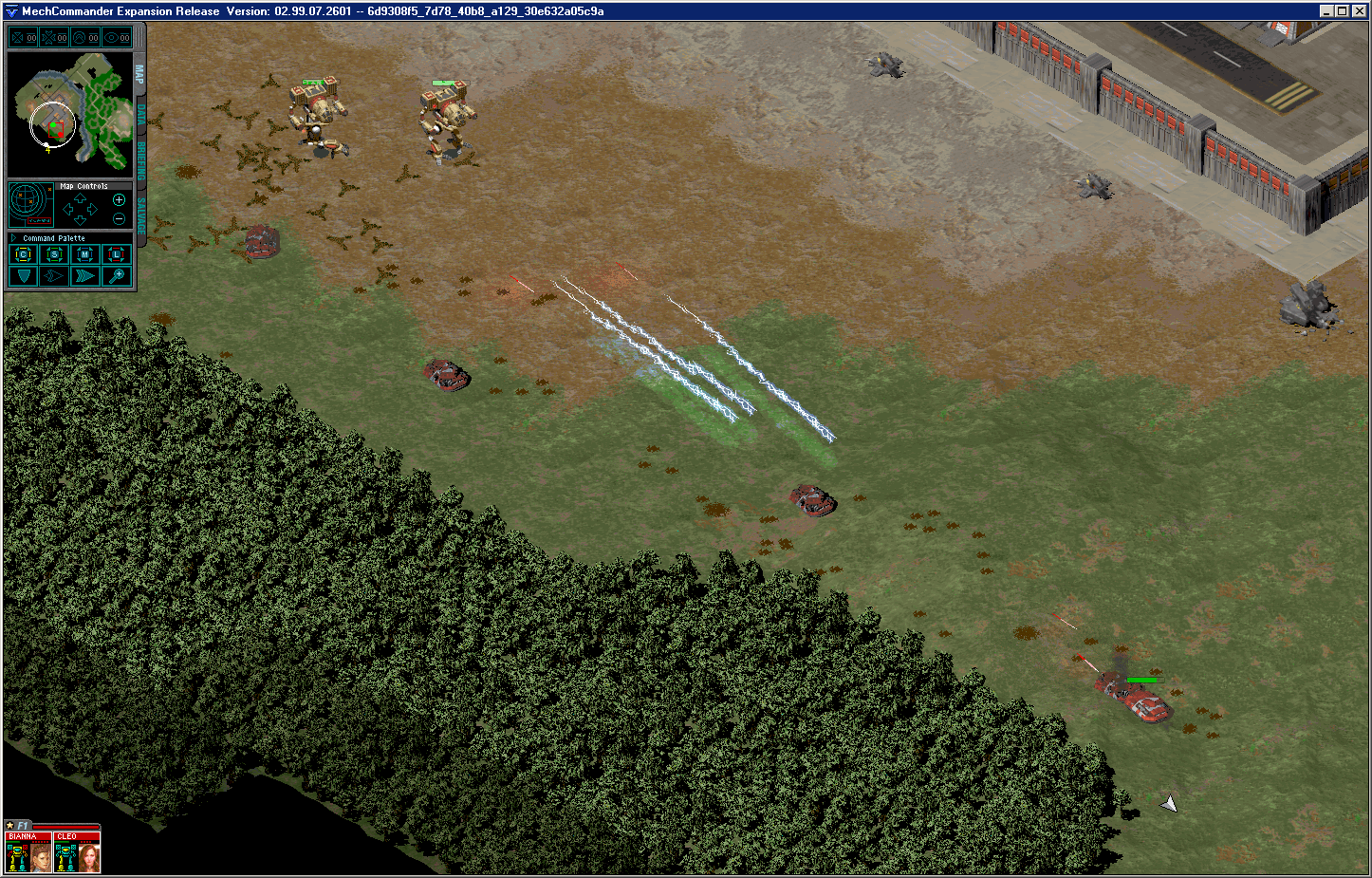 Try not to waste heavy ammo on swarms of puny vehicles.

Our heroes, take on a 100-ton Atlas at multiplayer - hope they've got the right weapons.

Multiplayer MechCommander requires the same tactics but against much cleverer opponents - usually. 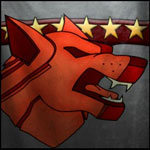 How to kick Clan ass

Play your cards right and you could salvage a Madcat. It's bloody hard though. 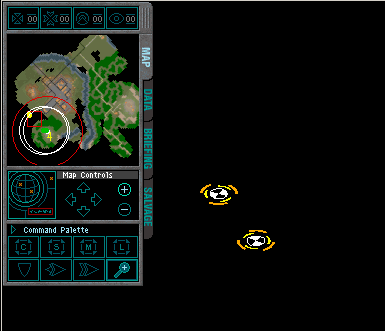 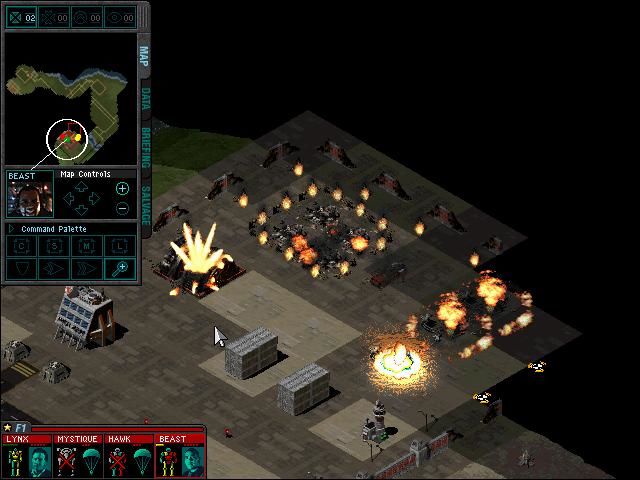 Small artillery strikes are ideal for taking out groups of annoying vehicles.

Remember the full power command 'cos it's a lifesaver. Running Mechs are hard to hit and don't get knackered like you and me. 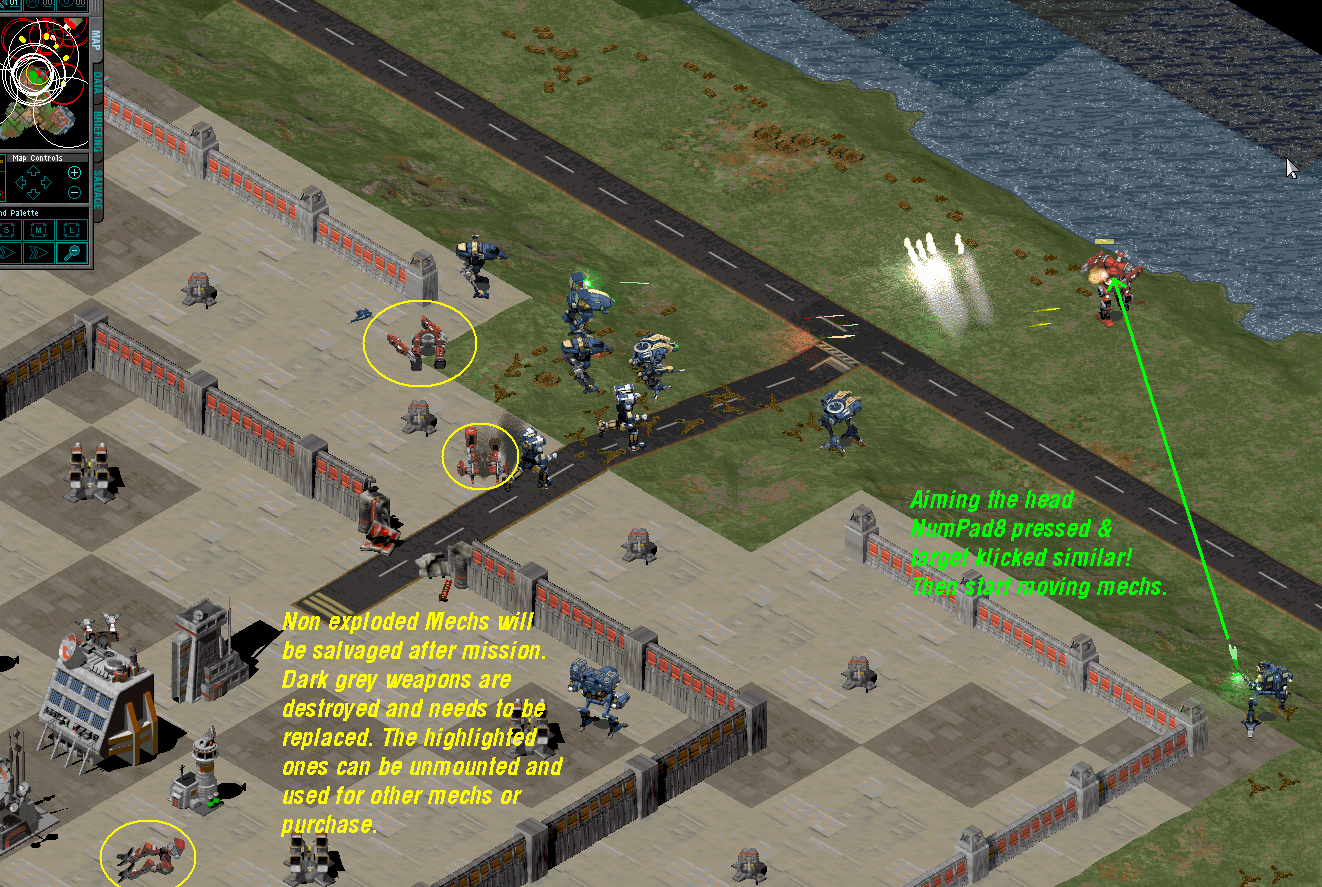 The best way to salvage a Mech is to 'only just' destroy it. Luck plays a part here - sometimes you won't be able to salvage a Mech, no matter how hard you try. If the engine explodes, that's it. It's gone forever. One trick is to take its legs out, disabling it in a way that won't ruin it completely. However, that can take much longer and will almost certainly mean you take more damage from it.
To improve your chances, bring the enemy quickly down until its status is red and then back off. Send only one or two Mechs with light weapons to finish it off. By this time, few of the enemy Mech's weapons will be firing anyway so it is much less dangerous. If you use a Gauss rifle to give the 'coupe de grace' to a red-line Clan Mech, there won't be much to pick up afterwards. The humble laser causes low damage and is perfect for finishing off Clan Mechs for salvage.

Top guns
MechCommander's weapons are listed in order of decreasing range and 'power' - a number equal to the number of damage points it can deliver in 30 seconds of firing that gives you a good guide to the effectiveness of a weapon. However, you should always take the load value into account - there's no point in having one weapon taking up all your tonnage because if it runs out or gets knocked out by a random shot, the Mech will be useless.
A good spread of weapons is always better than a single heavy-damage weapon. The same table also shows availability - the mission in which you can first purchase the weapon. In some cases Clan equivalents can be captured much earlier.

Best medium range weapons: the large laser concentrates damage and never runs out of ammo. Its low weight just gives it the edge over the PPC and autocannon.

Best long range weapon: the Gauss rifle is one of the real heavy hitters but its limited ammo makes it a dodgy choice on long missions. Don't dismiss the light and effective LRM packs. And if you happen to 'liberate' a Clan ER PPC, guard it with your life! It's probably the best of the lot.
Worst weapon: the light autocannon lacks punch, can run out of projectiles and is relatively heavy.

Clan Cougar is the best light mech. It can take all the EW upgrades the raven can, and can bring more weapons to bear.

This is just an old article of ONE MechCommander user. This doesn't mean that this is general MechCommander information that hits truth exactly on each aspect. It is more over a collection of player's experiences and opinions for the game in the past.

You are right with that point. In general clan mechs are a bit of advantage compared to IS units.