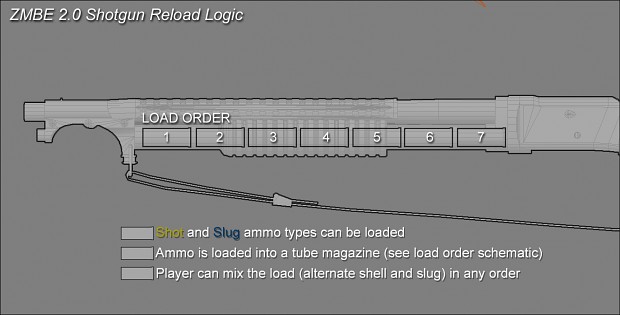 
Overview
In this news piece I would like to present you a feature that you would normally only find in obscure turn-based russian-made turnbased tactical games. Following the idea of giving the player as much control over weapon interaction as possible, new shotgun specific features are listed. Please note that previously announced features like ironsighting, gun jamming, ammo checking, magazine checking and manual pumping all apply to this shotgun too.

Basic reload procedure
Each press of the two different reload buttons will load either a 'shotshell' or a 'slug' into the shotgun.

Tube magazine
Each loaded shell will push the previously loaded shell further down the tube magazine. Therefore the shell that was loaded last will be the first in the chamber.

Mix and match
Players can choose to mix the load as they want to prepare for any situation that might arise. Since reloading is quite slower than in the average shooter, having the right type of ammo loaded when facing a specific type of zombie will be very important (or having the gun loaded at all). And yes, the ammo loaded will have a different effect on the different zombies players will encounter.
Also an observant Zombie master might even catch players with their pants down if they advertise their current load over VOIP and sv_alltalk is on.


Shot shell
The classic shotgun ammo, fires a cone of small steel shot with considerable spread. It obvious disadvantage is the loss of effectivity over distance.

Slug
Solid Steel projectiles, very effective against harder materials the zombies might be protected with. It also has a much stronger kick which will throw off the aim after the shot is fired. Re-adjusting aim is going to affect follow up shots much more than firing shot shells.


As always feel free to voice your feedback here and in our forums:
Zmbe.theicecave.net

finaly someone who got this right ... you could also add function "half-pump" eject current shell from chambler and load desired shell right to chamber, than close **** (and chamer - finish pump) to get ready to shoot...

Ejected shell can be added to magazine ...

Also low ammo shotgun shooting could be faster, If you could reload first shell to the chamber.

I think it is more ergonomic than from all other FPS known, reload down, pump, and shoot.

That is actually a nice idea. Can you explain this method in more detail? Also, is there a way to check what type of shell is currently loaded? I do not have access to shotguns so I would really like to find info on this.

PM me your email address I made skatch for you with explonation ...

what you have now In PM is rest of my email which I just try to sent as reply to automated moddb system ... because I didnt noticed it wasnt you... =D

so gimme mail and I'll explain everything =D

this is really amazing :D

Wow nice! This is truly a mod that deserves hight credit for their hard work to make the mod more realistic!

Is it just tube magazines? Or can we also do the same on the break action shotguns?

I think you should be able to pick up unused shells ejected by right-click pumping by pressing "e". Allows for loading a tube with a specific ammo without wasting a good clip, a simple way of sharing ammo (one shot at a time,) and allows for gathering your loaded shells if you find a shotgun you want but you don't want to waste your shells.