ZMBE 1.2e is out! Featuring a host of new additions, gameplay changes and updated maps.

ZMBE is a spin-off mod based on the original zombie master source code. Featuring 9 different all new weapons, 3 new zombie types and a challenging level of difficulty. 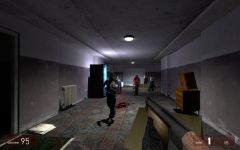 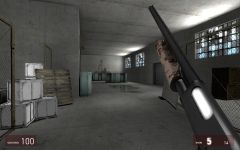 Who play this mod ? Mod have servers ?
Look good

Me :) Really nice mod, I hope they will improve the graphics soon.

NO THIS IS A NOT A GRAPHICS MOD!

yes official server is back online

this looks pro. i hated the original zombie master becuz it had too little maps and weps. but u guys should add like an mp5 or mini uzi or sumthin.

Someone is angry, lol.

But the new update destroyed the game. By replacing the Armored Zombie with the Wobbler, they have rendered the game near impossible for surviors. Now, instead of using normals Zombies as infantry, Blobs as Covert, and Armored as Tanks, you now have no Covert, as no maps have the Blob spawn, and the Armors have been turned into Wobblers. Now, weakening the Armor seems like a good idea, right? But in addtion to making it weaker, they gave you the chance to spawn about 5 of them in 2 seconds, at half the strength of armors. Now, lets do the math. One entity made half weaker, times five of them at the same time. It's much harder for the Humans, as all the ZM has to do; Or rather, can do, is spam Regular Zombies and Wobblers. It's been horribly ruined by the update, and I hope I can find someone on the old Version.