A short article about the history of Zhuque Attack Aircraft.

Posted by RA3CoronaDevelopers on Jul 17th, 2020

The European War in 1910s (?) attracted much attention from the military theorists of the Celestial Empire. Celestial Observation Groups, backed by their powerful yet neutral motherland, were able to present in every front without being harmed. Those mechanical birds drew much of their attention just like the steel monsters on the ground.

Before the war broke out, these birds were just some high risk, low reward experimental equipment. Even in Celestial Empire which is known for her technological advancement, aircrafts were only used for scouting or artillery fire adjustment. But wars are always the best catalyst for new weapons, within four years, the République, the Kaiserreich and the United Kingdom all threw their new toys into battle. For example, the twin-engine Handley Page Type O/100 was able to carry 500 lb of bombs. These aircrafts were enough to cause chaos on the ground when in numbers. The suppressive effect they brought was even greater than artillery barrage or armoured force assault. At the later stage of the war, military aircrafts became so fast and large that they could operate independently as a branch. The Celestial Observation Groups documented air force performance in detail. They considered this new weapon very potent. In the last year of the war, the United Kingdom formed the first independent air force – the Royal Air Force (RAF). This news pushed the Celestial military theorists to reconsider the status of aircrafts. Are they so important?

The aircraft combat capability evaluation project was halted however, due to the lack of flight data and effective new aircraft. On the contrary, those “tanks” won most attention from the army and general staff because of the ease to design and massively produce. The armoured force was quickly assembled after several military exercises.

Luckily the development Celestial air power was not full abandoned. Three years later, the book of The Command of the Air (Il dominio dell'aria) from Sardinia shocked the generals of the Celestial Empire. Despite its mixed reception in Europe because of Douhet’s radical approach, the Celestial high command decided to launch a full scale evaluation on aircraft potential. After all, it is a Celestial tradition to prove thoughts through actual practice and calculation.

The outcome troubled the Chief of Staff. On one hand, the current aircrafts in service only has insignificant contribution to any battle. They lack of range, speed, armament and reliability to achieve any mission. An army general even laughed at the aircrafts: “How can costly and inefficient aircrafts match the power of cannons? How can it even be useful?” On the other hand, calculation and statistics indicated the potential of more advanced aircrafts. With the help of gigantic new generation calculator, the Celestial General Staff deduced that certain number of air wings were quite capable of threatening enemy cities and strongholds. With the improvement of fire control system, aircrafts could launch more accurate strike against critical targets. In the future, aircrafts with more powerful engine might be able to carry bombs heavier than artillery shells or some kind of high accuracy bomb.

After prolong and sophisticated evaluation, the Celestial Air Force was finally established. As the youngest Celestial army branch of that time, she experienced a period of rapid expansion and development.

Years later, Celestial Empire proposed new requirements to the close air support aircrafts. New threat brought by the rising armoured forces in the northwest put much pressure on the Celestial Army. Although this neighbour claimed that it has no hostile intention toward the Celestial Empire, the high command nonetheless decided to divert more funds to ground and air force development as the border conflict continued to happen. The air force noticed an increased demand of CAS mission against armoured vehicle, which the Qinyuan attack aircraft currently in service is insufficient to fulfil. To resolve this weakness, the Celestial Air Force started a new invitation to tender on next generation attack aircraft with following requirements:

Such high standards were obviously more than a single company can handle. The final contract was won by consortium of Husu Union Industry and 2nd Academy of Aerospace Research in Capital (2nd AARC). The former would provide the engine and avionics, while the latter will design the airframe and weapon system.

The project, now named 1B605, followed a unique design philosophy. The 2nd AARC removed the tail, located the engine at the wing root, embedded variable-sweep wing and added triple flaps at the wingtip. This futuristic design reflected bionics development in Celestial military industry and it showcased its superior low-speed performance in the flight test. With proper engine equipped, this aircraft can even stably hover in the sky, allowing its cannon to fire with extreme accuracy. Coupling with the delicate airframe was the experimental plasma cannon. This revolutionary weapon was the symbol of an innovative and adventurous Celestial Air Force.

The smoothly developing project was interrupted by a bad news: The experimental plasma cannon is overweight. The designers were now facing a huge challenge.

The whole design was so carefully calculated that even the slightest overweight will lead to a complete disaster. The project stopped for nearly three month, until a more troubling news came. According to army intelligence department, the “not hostile at all” neighbour was planning to start a skirmish and would potentially develop into a full scale invasion. Given the circumstances, rushing the project was certainly not the choice, the 2nd AARC eventually fell back to their backup plan. A conventional 2 cun cannon (Code name AGF-5, anti-tank cannon. Using reduced charge APDS or HE-FRAG shell to reduce recoil) was used as temporary replacement when the weight reduction progress of plasma cannon was underway. 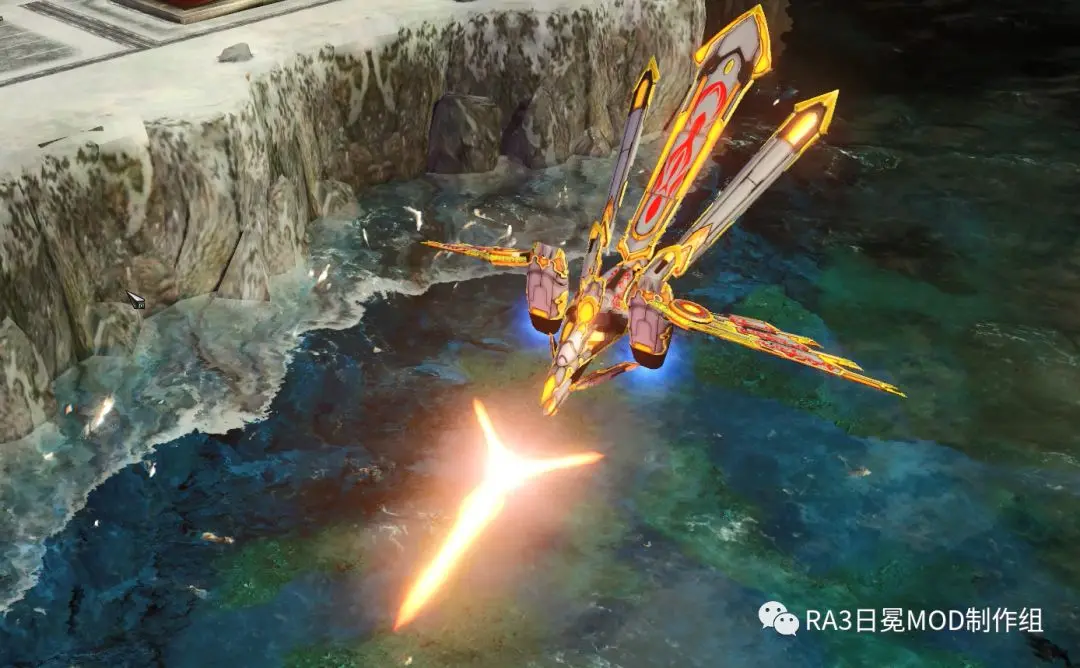 The Husu Union Industry fitted Mangshan-3 turbofan engine on the prototype. This engine has a maximum thrust of 117.72kN with a vectoring nozzle that could perfectly incorporated with the aerodynamic design. Two of this powerful engines made sure the new aircraft would have an above average manoeuvrability, since the original design was not for high speed performance.

Since the plasma cannon had loose connection with the fire god in Celestial tradition, the 1B605 was officially nicknamed “Zhuque”.

The secondary armament, different from the original plan, was a flame thrower. This weapon system was specifically designed to suppress soft target. Although it was originated from the good old flame thrower, the new type was actually high energy plasma instead of fuel. The flame can reach several thousand degrees Celsius, torch through any flame retardant. But because the plasma flame thrower shared the same power generator (a plasma furnace) with the plasma cannon, both weapons could not fire simultaneously.

After receiving the nickname “Zhuque”, the weapon operators of these aircraft named the flame thrower “radiant flame”, the latter coincidentally was the most powerful spell of the mystical being Zhuque.

Not long after the first batch of Zhuque entering service, the conflict in the northwest broke out as expected. Zhuque attack aircrafts were sent to the frontline for combat performance testing. These aircrafts tirelessly performed CAS mission, often consisted six to seven times sorties per day because of the inadequately equipped armoured forces was on the edge of losing. To compensate the negative effect of high intensity sortie, the air force specially prepared a new type of dim sum that could serve as both stimulant and nutrition supplement.

Notes from the Field

Battlefield reconnaissance has revealed at least these facts about the Zhuque Attack Aircraft:

Descends from Above – The Zhuque attack aircraft has an efficient power system and a plasma furnace as additional power supply. Once being deployed, it will no longer occupy slot in Wingpad.

Ground Attack Specialist – Zhuque is specially designed to hunt down ground target. It does not have any anti-air weapon due to weight issue. The frontline commanders are required to pay special attention to enemy fighters.

Flying Flames – Zhuque is armed with plasma flame thrower that can almost burn everything into ashes. The plasma can also soften the outer layer of targets, making them susceptible to incoming attack and slowing them down. Structures cannot protect soldiers from the plasma flame either, they will be burn down along with the soldiers in them.

Avoid Being Focused – Although adequately protected, Zhuque does not have the best armour to make it stand under heavy fire for long. It is highly advised to avoid direct contact with enemy anti-air battalions.

Translated by: Mirage in the Void

Artillery Birds with a Flame Breath.
I hope the range is not too great, because AA in this game is montruously effective, and you can almost always guarantee that a flying artillery unit will remain alive and firing for a long time.