Extra-special special events, full ambient audio, and 1.0 in reality if not in name. We're now over seven years in the making, but it's not over yet...

And another year of development whooshes by! Okay, so no surprise there, Cogmind has now been in continuous development for over seven years, and it's once again time for the usual end-of-year annual review.

Building Cogmind is still very much my full-time job at the moment, though as we'll see in the review, this year saw a slight reallocation of time to other roguelike-related endeavors. 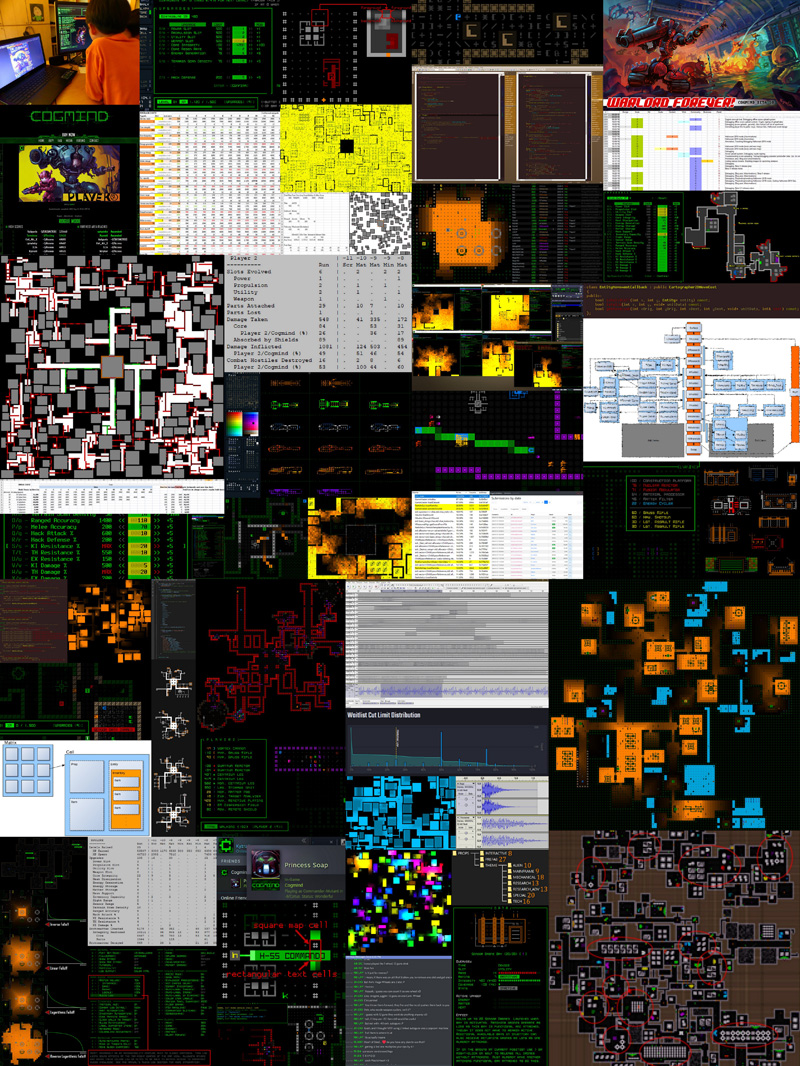 Selection of images from the past year of Cogmind-related development as posted on this blog, forums, and Twitter (full mega size here).

As always, I'm recording daily development stats in order to maintain a collection of pretty graphs over here. The main graph has been extended by another 12 months to include 2020 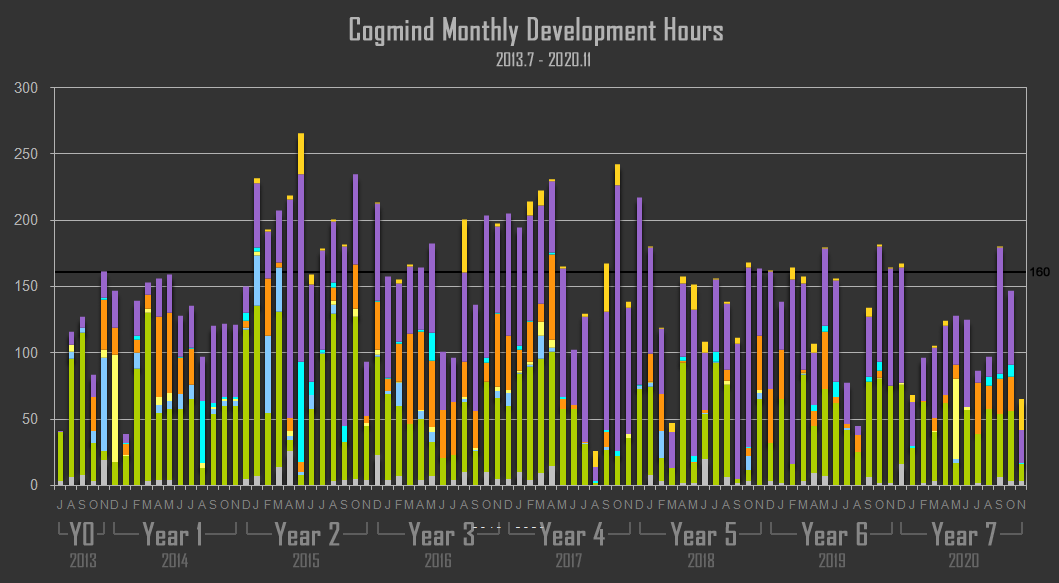 Every time I look at this thing it brings back memories of the summer of 2013, starting on Cogmind's design doc and background story, and how I had absolutely no idea this would lead to a new long-term job, and what we have today :P

The cumulative hour count is now 13,221, having added 1,400 hours this year. January hours are especially low since I was out of the country for a few weeks at the time, and November low because I had been putting off a lot of personal stuff for a while that I could finally address last month with releases out of the way, then I unexpectedly also had to get a new laptop (setting one up takes forever...).

I'm happy to report that my average number of work hours in recent years is definitely much more sustainable than in the early years of development, which could get quite unhealthy!

Like last year, we can see that I maintained the new trend of putting more time into the game itself rather than community-related work: 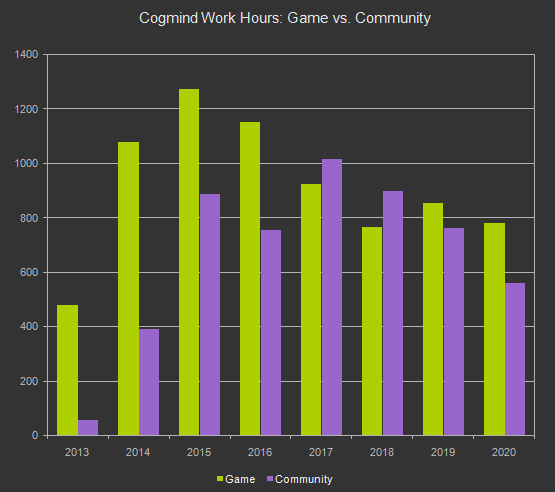 Comparing the amount of hours directly spent working on Cogmind vs. community-related work (excludes hours that belong to neither category).

This would be a natural side effect of less writing and less Cogmind streaming but certainly not wanting to work less on the game :). Honestly I would prefer to be working on the game much more than I currently do--it's so tempting, but at this point it's probably a good idea to do a better job balancing life for the long term.

This year's release lineup was another odd one with more events than regular releases, and featured by far the longest string of expansions on a single major version--Beta 9 went all the way to 9.6 xD. 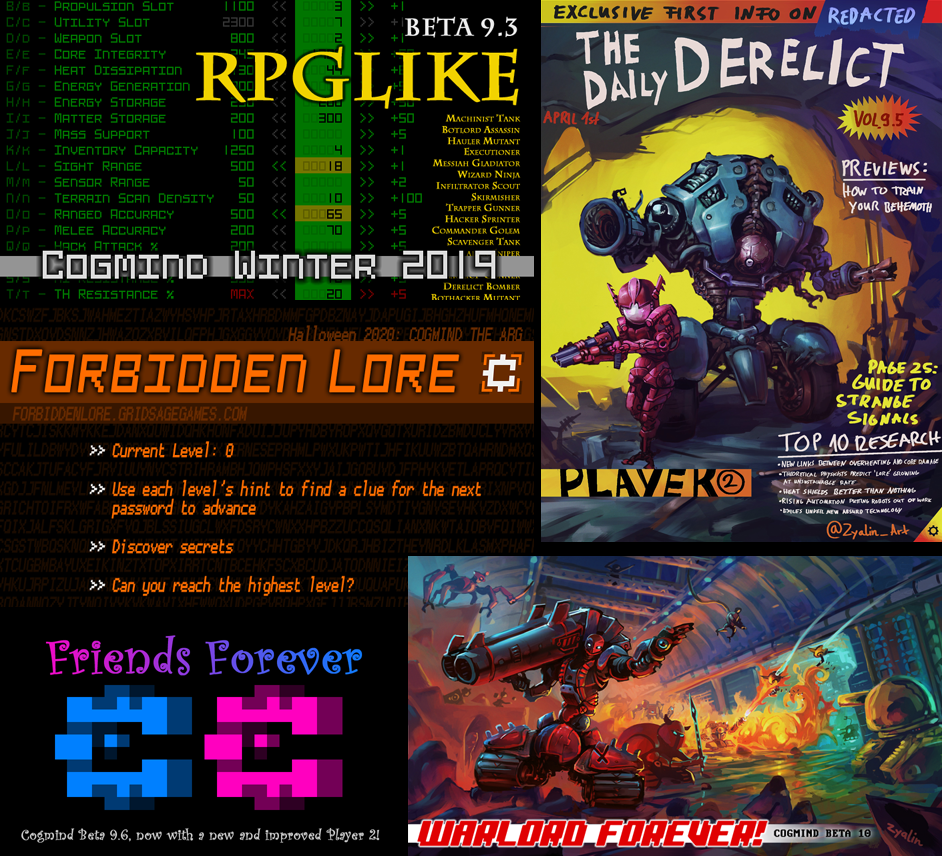 But the flagship release was of course Beta 10 "Warlord Forever," adding not only two new endings but also completing Cogmind's entire ambient soundscape! I wrote about that process in detail, as well as related audio accessibility features. So glad to have that behind us now, as it was the only required pre-1.0 feature left on the roadmap, which now basically consists of "YAY FUN STUFF!!!"

Beta 10 comes with a ton of stuff, including a new set of RIF abilities, like Command Fork, seen here as applied to overload_power and streamctrl_high.

Many thanks to all you players for leaving reviews, helping spread the word about Cogmind, and generally just being a friendly bunch.

And additional thanks goes out to all you supporters on Patreon, where we're even finally closing in on the next fundraising milestone. There are currently a few references to The Unchained, but no details, although their origins have finally been revealed in one of the new Forbidden Lore ARG entries.

Also something you can do now real quick to help out: It’s that time of year again when IndieDB does its Game of the Year voting, and although Cogmind is too niche to pull the numbers necessary to compete against mainstream titles for the Top 10 in the second round, for the past six years in a row we’ve made it through the first round of voting to take a spot in the Top 100 list, which is pretty neat and could help more people to find the game. 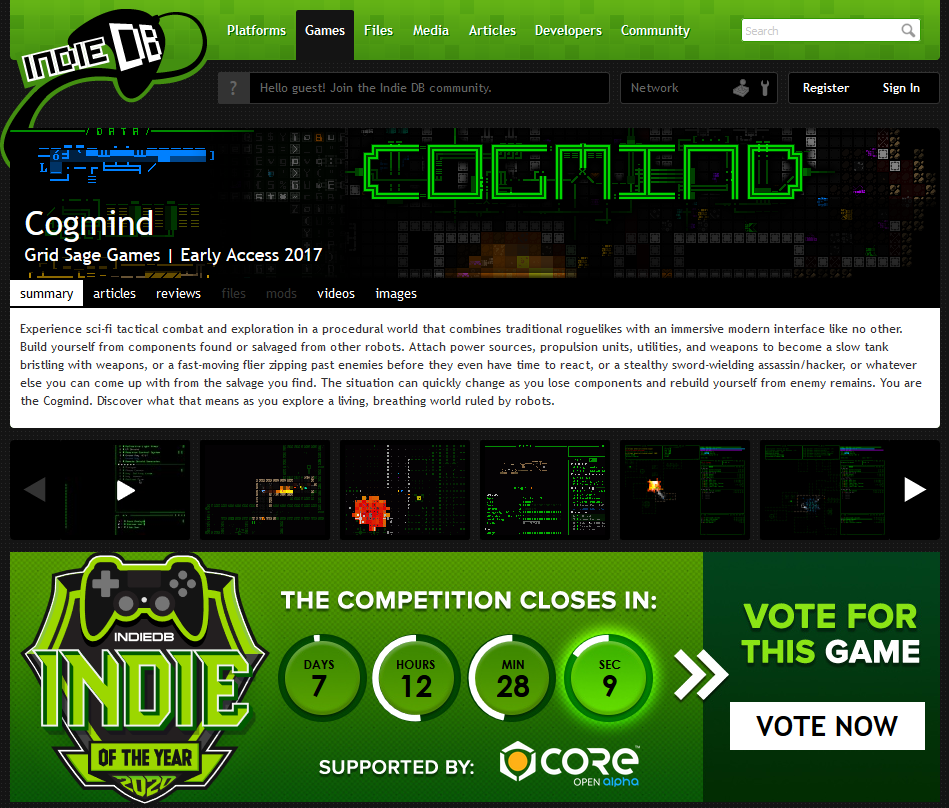 So if you have a chance give us a vote there, along with all your other favorite roguelikes/indie games that have a page on the site. (Registration isn’t required, but if you do have an IndieDB account you can maybe win a key for one of many different games if interested.)

One thing I hope 2021 will be known for (aside from less death and disease) is fewer Cogmind events. Next year I'll mostly be focusing on the base game, because even though it's "done," there sure are still a lot of other things I want to do with it. I do have one really cool event I want to hold, yet again very much unlike anything we've done before, and something that I think long-time players will love, but it's likely more than a year out.

Instead, the upcoming Beta 11 is going to be 1) huge, and 2) full of content adjustments (especially parts), and Beta 12 after that is looking like it might even feasibly be time to implement the next review milestone project if it's reached by then! The faction in question is actually one of those described in the Forbidden Lore ARG ;)

(As a reminder: The Merchants Guild is definitely happening, but more likely as a free post-1.0 expansion--that's a much bigger project.)

While we technically have a roadmap on the FAQ, for a while now it has been much less of a true roadmap and more of a record of what's been completed and when, seeing as I keep inserting new items as appropriate with each new release cycle. Beta 10, however, was when I finally set the Progress meter to 100% (it sat around 95-98% for years :P), because while updates will continue, the beta plans are complete.

The current state of the development roadmap from the FAQ (snapshot from 201030).

This is where most games would exit Early Access and release 1.0 (well okay, probably long before this :P), but I'm not planning to do that yet. One day it will happen, but today is not that day, and 2021 is not the year :)