Experience sci-fi tactical combat and exploration in a procedural world that combines traditional roguelikes with an immersive modern interface like no other. Build yourself from components found or salvaged from other robots. Attach power sources, propulsion units, utilities, and weapons to become a slow tank bristling with weapons, or a fast-moving flier zipping past enemies before they even have time to react, or a stealthy sword-wielding assassin/hacker, or whatever else you can come up with from the salvage you find. The situation can quickly change as you lose components and rebuild yourself from enemy remains. You are the Cogmind. Discover what that means as you explore a living, breathing world ruled by robots.

Cogmind is now in its 9th year of continuous development, so as usual let's take a look at the past year of progress in yet another annual review!

Although most of the feature progress I share is in the form of animated gifs, there are a handful of static PNGs as well which I've compiled into another collage for a visual overview of 2021: 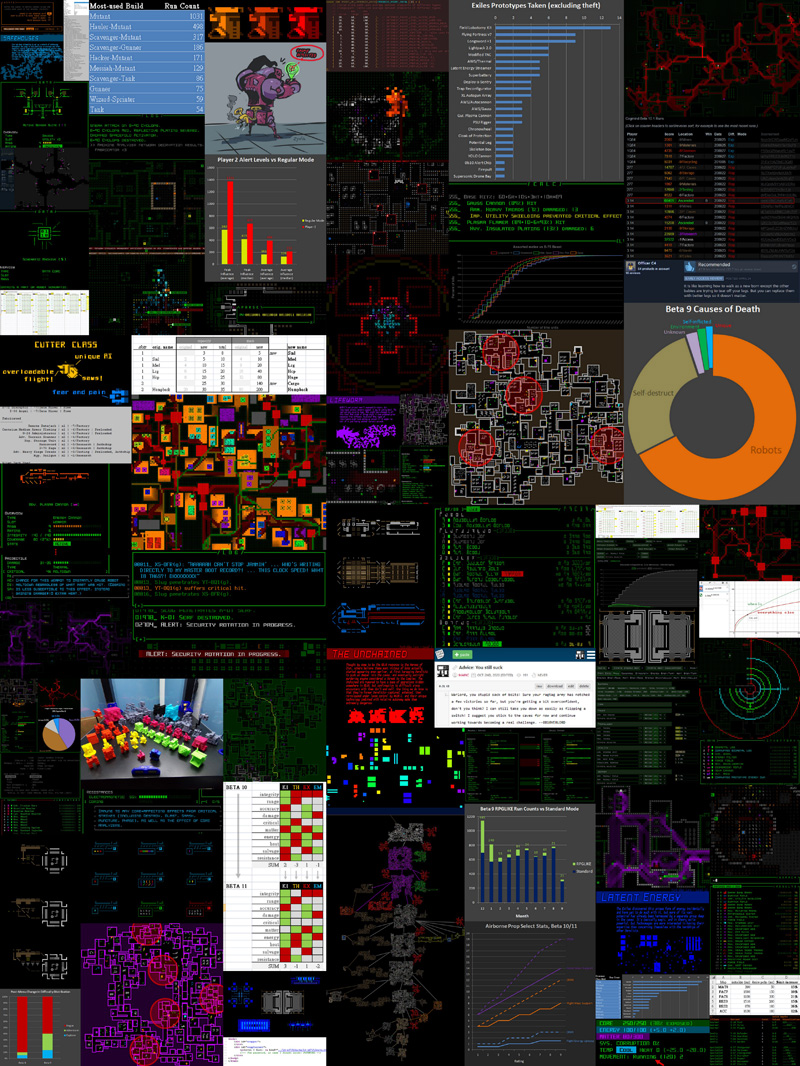 Selection of images from the past year of Cogmind-related development as posted on this blog,
forums, and Twitter (larger size here).

Hourly recording of dev work continues as usual, and the trajectory is similar to last year with more time put towards coding and work on the game itself as opposed to community-facing marketing-type stuff (an angle made easier by the lack of public releases, but we'll get to that later :P). I've been a lot less interested in getting the word out and would rather focus on spending time with current players (the Roguelikes Discord is where we're at!) and improving the game for those of us who are playing it.

That said, it's still important to do some types of that outward-facing stuff which includes a lot of discussion and writing, so even at this rate I don't really see, for example, Code overtaking Community in this graph for a long while :P 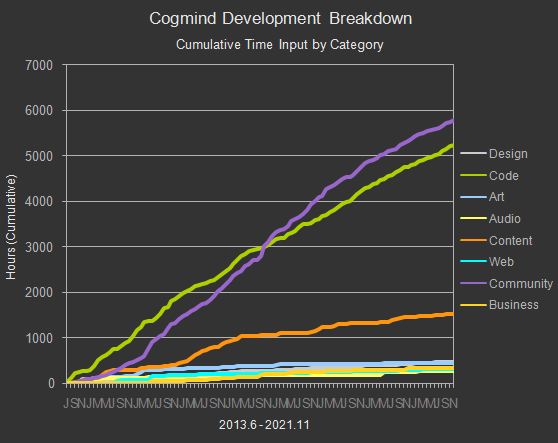 A categorical breakdown of the hours that have been invested in Cogmind-related development over the years, through November 2021. (More data and details about each category will be shared at some point in the future during a comprehensive review of these records.)

Like 2020 there was a fair bit of extra time allocated to non-Cogmind-related roguelike community efforts (and therefore excluded from my tallies), such as the usual moderation, but also quite a lot of 7drl reviewing and streaming, and introducing and streaming other roguelikes.

I also took some time out in the middle of the year to try to bring in funding through other means, but without going into details let's just say that didn't pan out in the end (though it did unfortunately eat up that time xD). No matter, we have a growing patreon! (see further below)

This is normally where I'd cover all the public releases from the year, but... yeah, in a rather anomalous development we didn't have any aside from the quick AFD job back in April (it was released in tandem with this progress report, though there was no changelog or other description for it, as a sort of surprise since... all robots explode in dramatic fashion when destroyed :P).

2021 marks the first year in which Cogmind had no major public release, which if you've been following the blog (or checking out the occasional long-term progress announcements or my streams) will know is because the year has been spent working on the next huge iteration of the game along with patrons.

So 2021 is basically the year of Beta 11, in preparation for which there have already been eight major new versions (and other minor ones) released for testing since January, covering a variety of new and revamped systems as the whole of Beta 11 comes together. Development has been going pretty smoothly and I hope to have it out some time within the next few months.

While the year has been a special one in Cogmind history for being entirely devoted to laying the groundwork for a great 2022, this is not only in the sense that a game-changing Beta 11 is well on its way to completion...

For one, support via Patreon has really come into its own! The numbers don't lie. 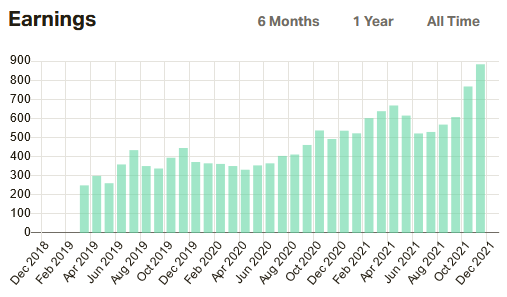 Having reached and maintained the level I set for funding "the Unchained," guess what Beta 12 will be bringing in 2022 :D. That's one of the potential mini-factions which I haven't really talked much about, though they were given a bit more color as part of last year's Forbidden Lore ARG (search the walkthrough for the keyword "unchained").

The financial support is great since it means development can continue without selling DLC or expansions etc., which put more awkward pressure on the design and are something I've always wanted to avoid even though it would technically mean more revenue. Having a better and more cohesive experience is more important to me, and I'm sure is more appreciated by players as well.

Speaking of thresholds, not too long ago Cogmind's Steam review count finally reached the goal I set two years ago (800 while maintaining an OP rating), and that means we also even have a roadmap for next year's Beta 13! It will feature yet another faction, this one hailing from a new Derelict community currently dubbed "Scraptown" (a code name subject to change once implementation begins). I also gave the concept a little more color in the ARG (search for that keyword in the walkthrough), but still mostly teaser material rather than specific mechanical details or lore implications. (Noticing a trend yet? That ARG is full of concepts that could easily find their way onto Tau Ceti IV some day...)

Seeing as we've already got an extended roadmap laid out (remember there's also the Merchants Guild to come in a bigger expansion, too!), I'm not setting a new review threshold for now, but keep 'em coming since it's good for the future of the game :D

One could say 2021 has been a very big year for third-party releases by the player community :)

Although I've already mentioned some of them in previous progress updates, it's worth highlighting the major projects here again as well since they're new this year and forming an important part of the experience for players that make use of them.

Cog-minder by aoemica is a great resource with a filterable item database, build theorycrafting, combat simulator, and more. It's still getting occasional fixes and updates, but is a very useful tool if you want to plan out how to take your game to the next level.

Visual summary of some of Cog-minder's primary features.

Dataminer by leiavoia takes advantage of the large amount of run data collected by Cogmind from players who opt into the leaderboard systems in order to present you with a huge range of graphs summarizing each run, even including unique forms of analysis. (Dataminer is also still expanding with new features.) 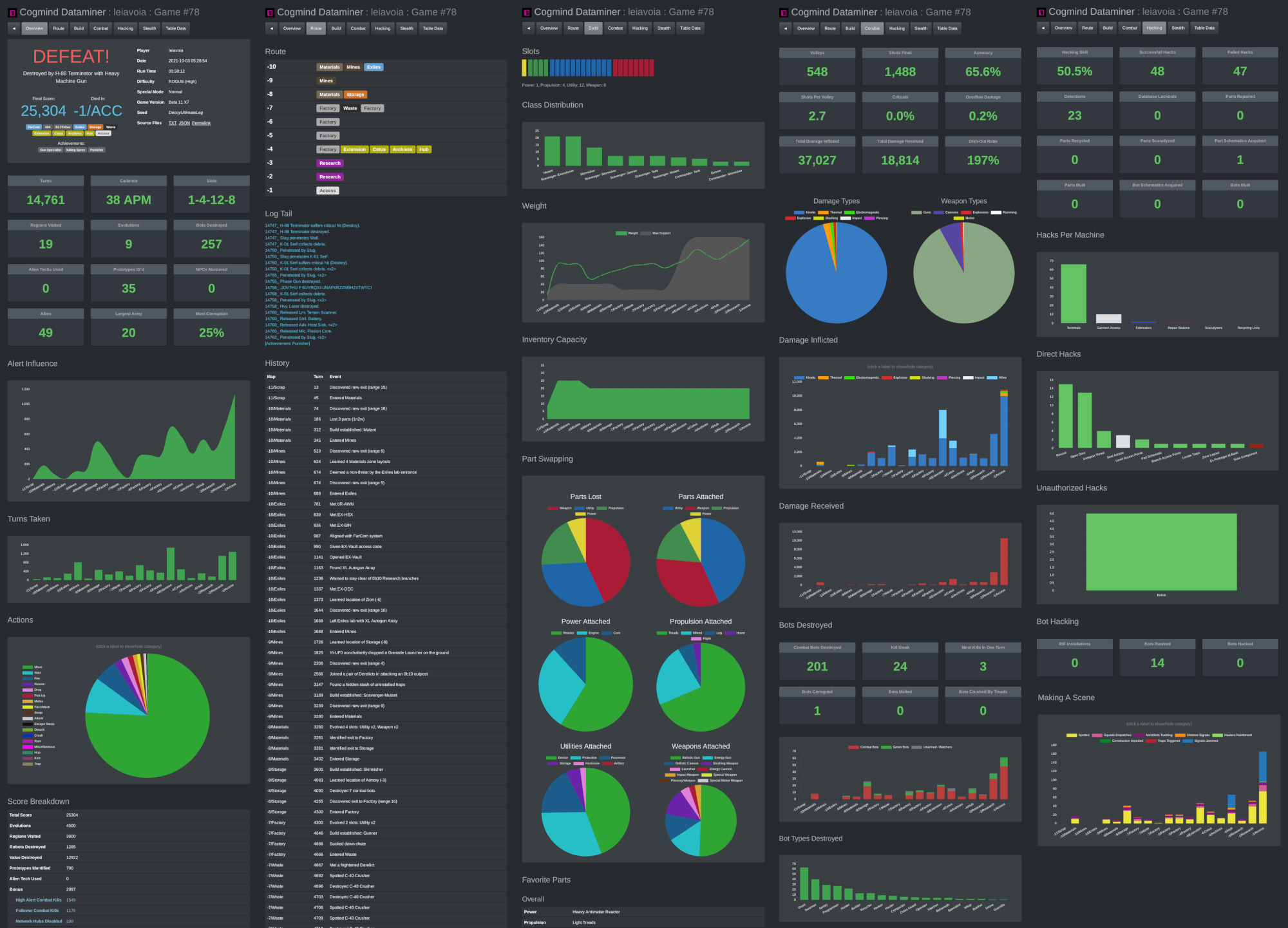 High-level overview of some of Dataminer's run stat features.
Direct links to Dataminer processing have also been added to the run database.

Runia's 3D-printed bots based on Cogmind's tileset both look great and are also for sale if you'd like your own. (Runia can be found on our Discord.) It's been fun watching these come to life over the year as Runia discovered more of them in game :D 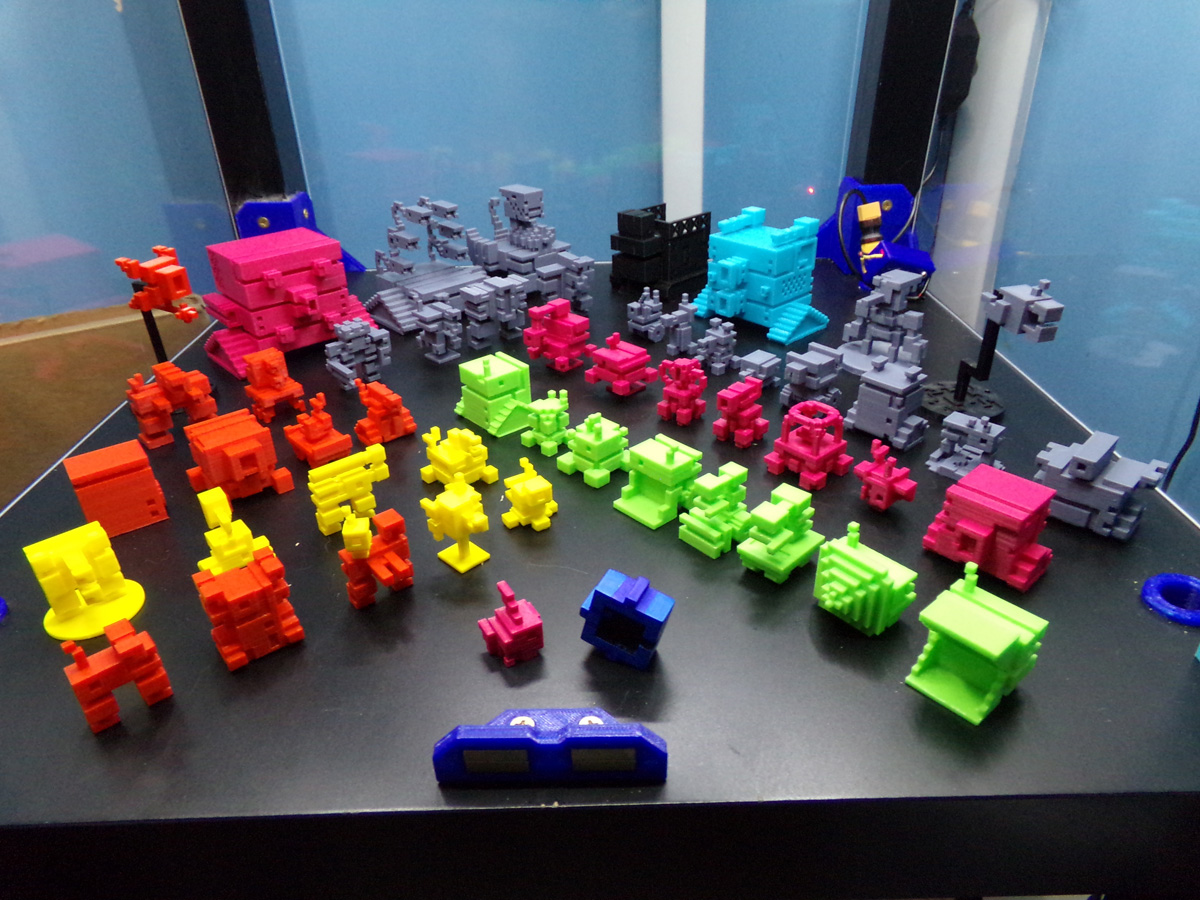 A partial set of completed 3D-printed models from Cogmind, by Runia.

Also it wasn't for everyone, but I did actually create a special one-time event for two of Cogmind's streamers who were playing together earlier this year, Tone and MTF, and many of the core players hung out in those streams (or later watched the videos) to do a sort of "stream-only ARG," basically unique content only for that one run which filled in a bit of hidden lore that no players had uncovered in last year's ARG. I'm quite happy with out that turned out, and Tone archived the run on YouTube if you'd like to check it out, with the first video here:

A big <3 to the great Cogmind community, which really helps keep me (and this project) going.

I won't post a screenshot this year, but if you've got a moment there's some days remaining to vote for Cogmind over on IndieDB. Always nice to make it in their Top 100 list for a little extra exposure when that comes out (and then not bother competing for the top 10 because those games have much larger communities--but we can manage Top 100).

Normally I'd end with a little talk about our roadmap, but this year being special and all I seem to have already covered that above, since what happened this year has played an integral role in confirming what's to come.

In summary, we should see Beta 11 in all its glory released within the next few months, followed by Betas 12 and 13 each with a new faction and mechanics, coming much more quickly than what you've seen with Beta 11 xD

I also have at least one major event in the planning stages (promise it'll blow your Cog-mind), but I'm currently imagining that'll be further out beyond these releases. We'll possibly have some other smaller ones during the year as well, depending on how the release schedule aligns with other factors.

Interface for adding and interacting with custom map comments for recording reminders specific to a location.

Introducing the new 0b10 "Heavy" class and a range of related mechanics that make exploring the complex even more challenging in interesting ways.

Adding a new type of high risk-reward event to the main complex, and what that means for players.

Detailing the most powerful yet controversial type of long-range sensor yet!

This, together with dwarf fortres are the best usage of the ascii i ever seen

Please seriously consider selling Cogmind on GOG, there are not many sci-fi roguelikes there.Thanks...

Oh sure I've considered it. But after they asked me whether I wanted to put Cogmind on GOG a while back I said I needed more time and they haven't replied to my emails since :/

I'd love to hear back from them, but stopped bothering for now since I already sell DRM-free direct anyway.

There's a page for Cogmind on GOG here: Gog.com

Probably the coolest and most clever use of Ascii ever? Going to be keeping my eye on this one.

Thank you, coming to Steam next month! Had to take a little break due to an injury, but getting back into things to make the next leap now...

Need to post another update actually, but I've been gone from IndieDB for a while because they blanket blocked my IP range :/

Lets push this project into the top 100 indie games of the year! Don't forget to vote people!

Thanks everyone for your votes!

Cogmind made the top 100 last year, and that's before it was even released, so I'd be disappointed if we couldn't do at least that well now that so many are enjoying the alpha!

I appreciate any votes to help make that happen :D

(I imagine the top 10 is currently out of our league, being a niche game still in alpha, but I think 100 is completely doable.)