The XWVM Dev Team is proud to announce the first playable closed preAlpha release of XWVM. And to help testers with it, this is a guide explaining how to get it, how to install it, how to use it, and how to report issues to the dev team.

It's been a long time since we started talking about making a engine-replacement mod for classic X-Wing. It was November 2014 when we started the topic in the GOG forums for the X-wing series of games.
About 2 and a half years later of working on the mod in our spare time (we are all having our daily jobs and families after all), we have a first release that we think is at a playable enough state to be shared with an intimate inner circle of supporters for preview and testing of the core mechanics and engine.

The state of the game

The game is in absolutely preAlpha, early access, preview, unoptimized, unfinished, incomplete, not-at-all done state. It's lacking 90% of the content and assets, if not more, and the amount of polish is at the "You can look at it without pulling out your eyes just after" level. We are always improving the visuals, replacing old models, adding bells and whistles.

However, the game is complex enough to make sense to release it already in its current state so that we can get an idea of how good or bad it performs in the spectrum of PC configurations that is out there. That will give us directions about where to go next, or what requires most urgent attention.

One of the boogiemen that haunts us is the extreme variety of input devices (joysticks, controllers) that one can find plugged on today's PCs, and that XWVM should at least partially support. And without releasing the game in the wild we will never truly know.

Also, the CPU and GPU processing power in PC is totally disparate among users, so we also need to know if for some configurations the game is good, bad, okay, or just unplayable. Not much time has been put into optimization, and this definitely helps us tell what parts require us to look at most.

It is being given access first to the team of testers that applied for it in the GOG forums.
At a later point, more testers will be added once the initial catastrophic disastrous bugs are dealt with.
It's just better to have only a few tens of people crash testing the roughest builds and, as they get more stable, let more people start playing with them.

I'm one of the registered testers. What do I need?

First, get X-wing. You need the original game to play. Without it, XWVM does absolutely nothing.
The edition of X-wing does matter. We recommend getting the digital downloads from GOG or Steam if you don't own the game already, or you had it in the 90's but lost it in the dunes of time.

Then, you will need to download and extract XWVM to some folder in your computer. The game doesn't need more installation than that, so feel free to place it wherever you want.
If you are a tester, you must have got an email with the link to download the latest build of XWVM. Just run the XWVM executable to start it.

If you already have it in GOG or Steam, you are good to go. XWVM will hopefully detect it on start and let you know.

If you have an original retail version of X-wing, we are currently only supporting the CD-ROM releases for the moment. Both the DOS CD-ROM (1994 edition) or the Windows CD-ROM (1998 edition) are fine and virtually identical to the GOG and Steam releases.
XWVM works okay with the CD-ROMs. It only needs to read them (it doesn't write anything back to the original X-wing folder), so you can theoretically just put the disk in your optical drive and select that drive when XWVM starts.
However, optical disk reading speed is very low compared with a hard drive, so instead we strongly recommend you to make a folder somewhere in your harddrive and copy the full contents of your X-wing CD-ROM into that folder; then select that folder when XWVM starts. This will make XWVM run much faster.
Of course, all of this is irrelevant if you have the digital downloads from GOG or Steam, since they are already in your hard disk drive. 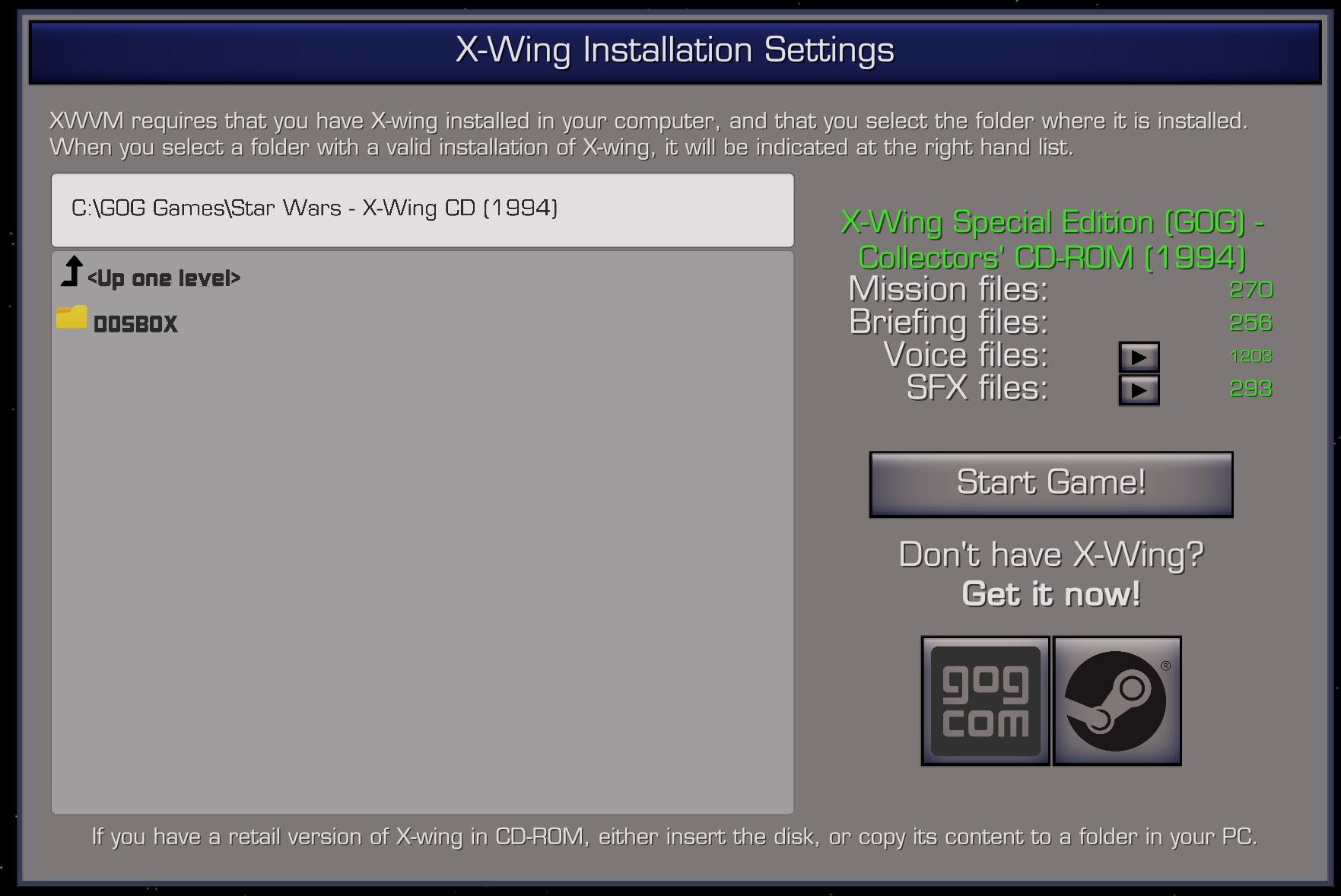 That is the first screen you will see when you start XWVM. If the game detects your digital download, it will immediately select the folder where it is installed, and list the edition name, and the amount of usable assets.

If it doesn't, then you need to navigate to where you have your X-wing folder and select it. When it finds X-wing in your selected folder, it will list the edition found, and the Start Game button will become usable.

Logging into the game

The preAlpha test build requires user registration to keep track of all errors, hardware, resolutions, visual settings, performance, and other instrumentation for the purpose of being able to diagnose problems better and faster.

After the initial new text crawl, you will be shown this screen:

Enter the email address your used to register as a tester in the application form, then click the Register button.
The game will hopefully validate your identity and welcome you into the missions selection screen.

Setting up the game

You should customize XWVM to your preferences and system. Once you reach the Mission Selection screen (or during flight) you can press the Esc key to open the settings panel. 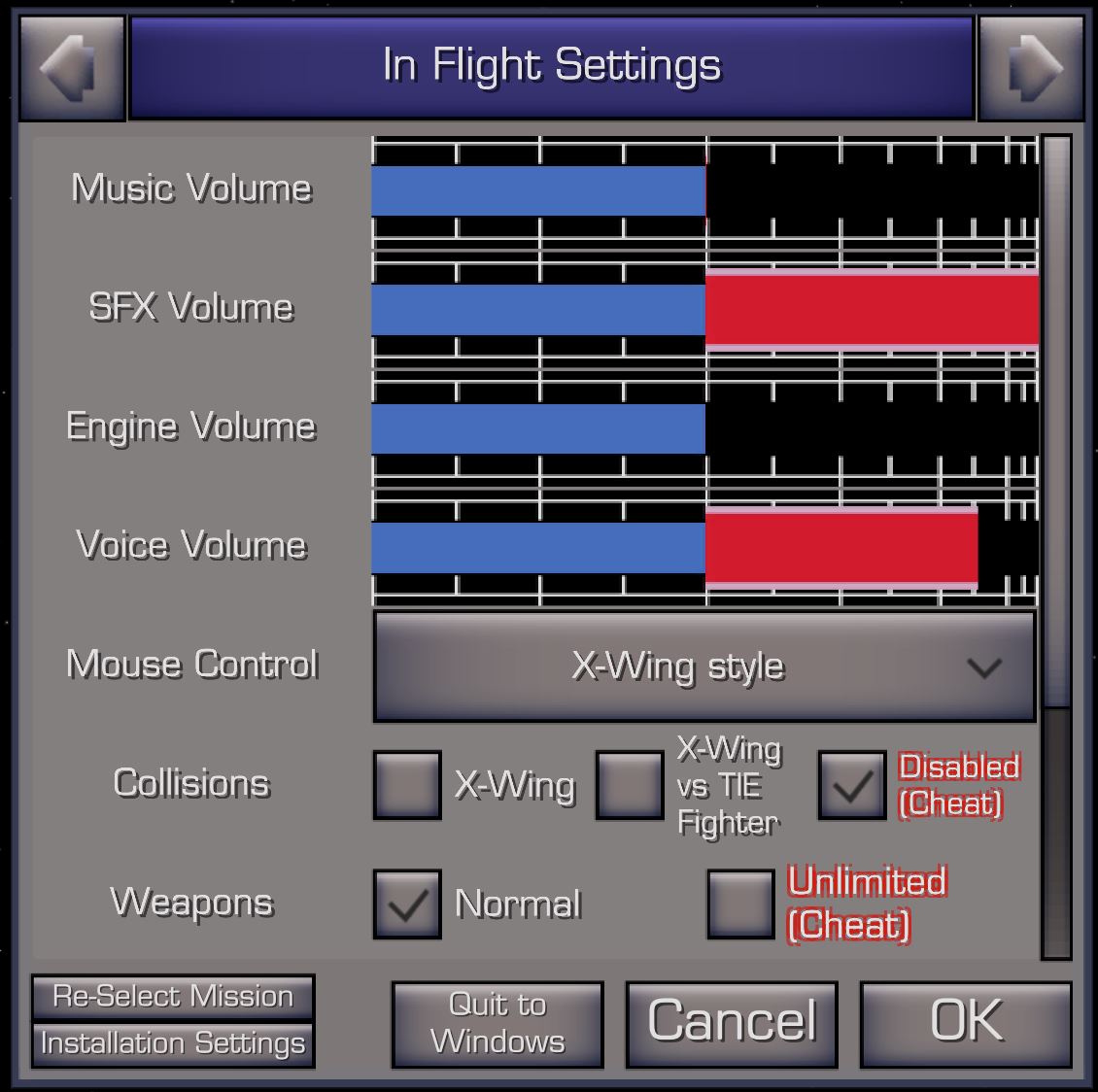 This panel has several sections. Please note the arrows in the title bar to switch section.

The In Flight section controls main gameplay aspects like volume levels, collisions, infinite weapons, invulnerability.
It also lets you enable or disable mouse control during missions. If you disable it, the mouse will be release for you to move the cursor (it could be used to reprioritize the repair order in the damage control screen, or to scroll up and down the message log). The TAB key is bound to toggling the mouse control on or off during play, so that you don't need to come to this panel.

This panel also lets you close the game, jump back to the mission selection screen in the middle of a mission, or reselect your X-wing installation folder. 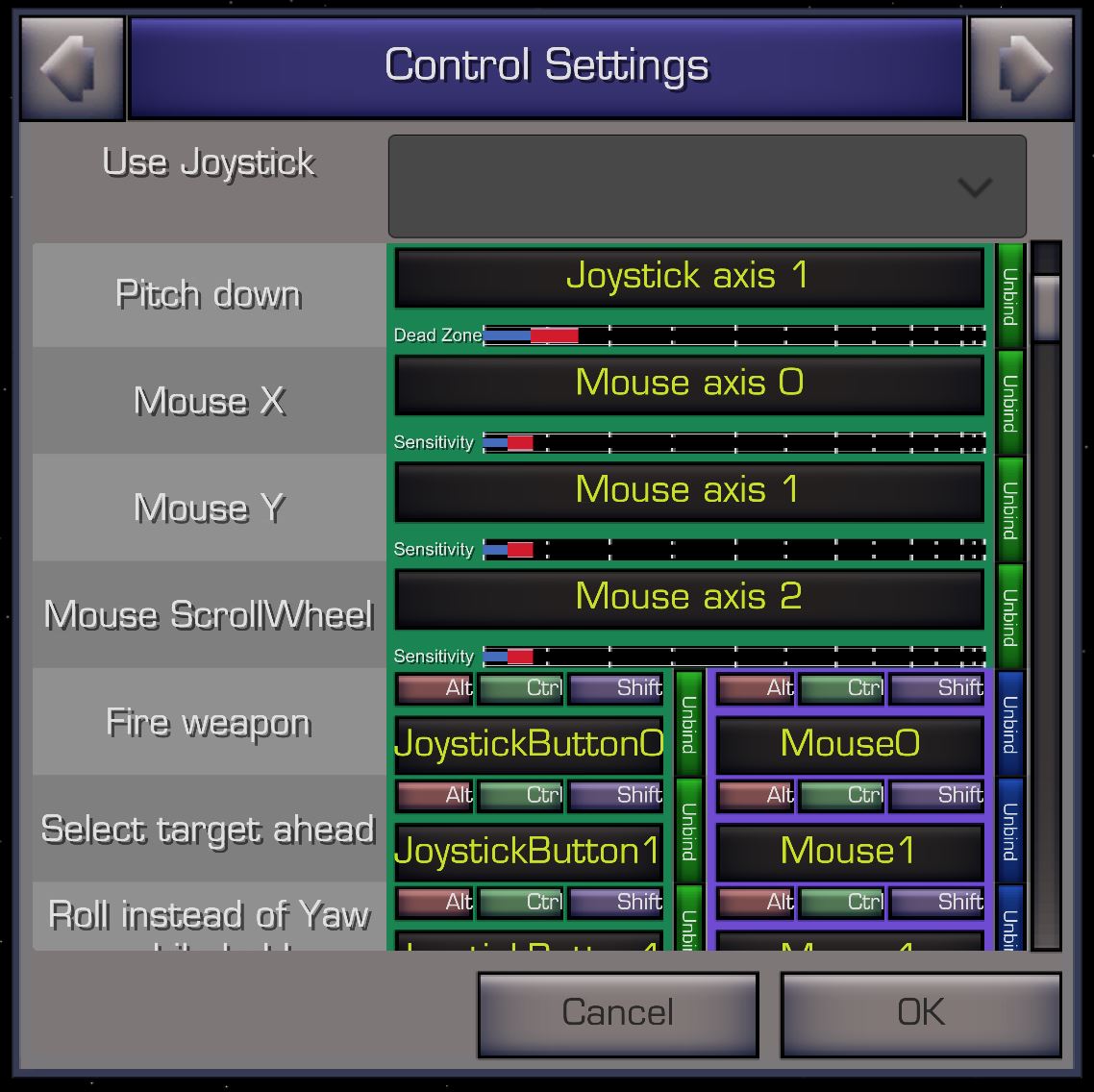 We assume you have some experience playing X-wing and know how the game works and most of it's keybindings. If you don't remember them, you can use X-wing or TIE Fighter's key reference. The controls are mostly the same.

You can play the game with mouse, joystick or game controller. The keyboard will always be necessary since there are just too many controls to map to a joystick, controller or mouse.

The Control Settings section lets you select which joystick to use, and to rebind the many controls to some axes, buttons and keys. 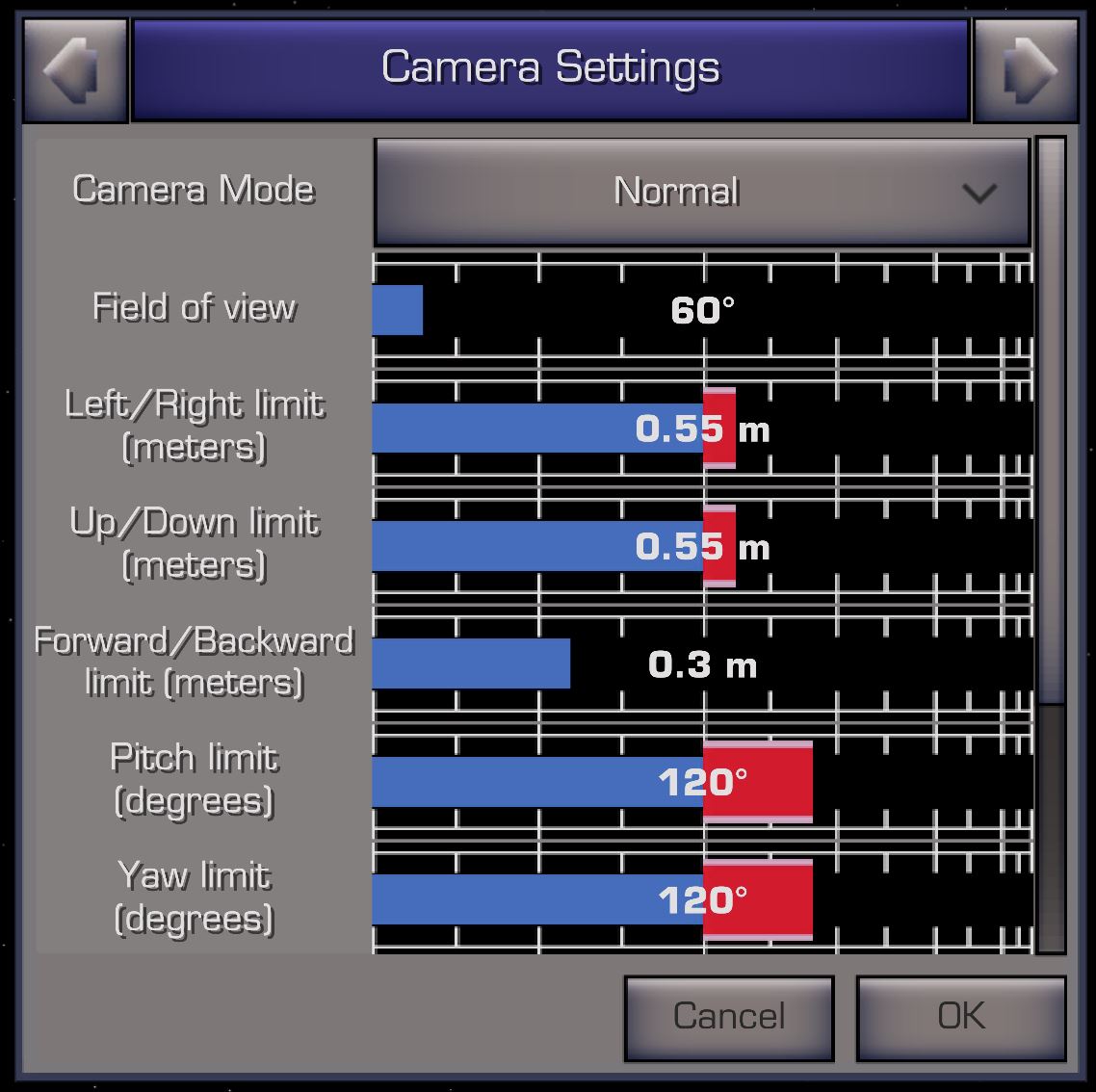 This Camera Settings section will be used mostly by those with special screen configurations, or TrackIR hardware. 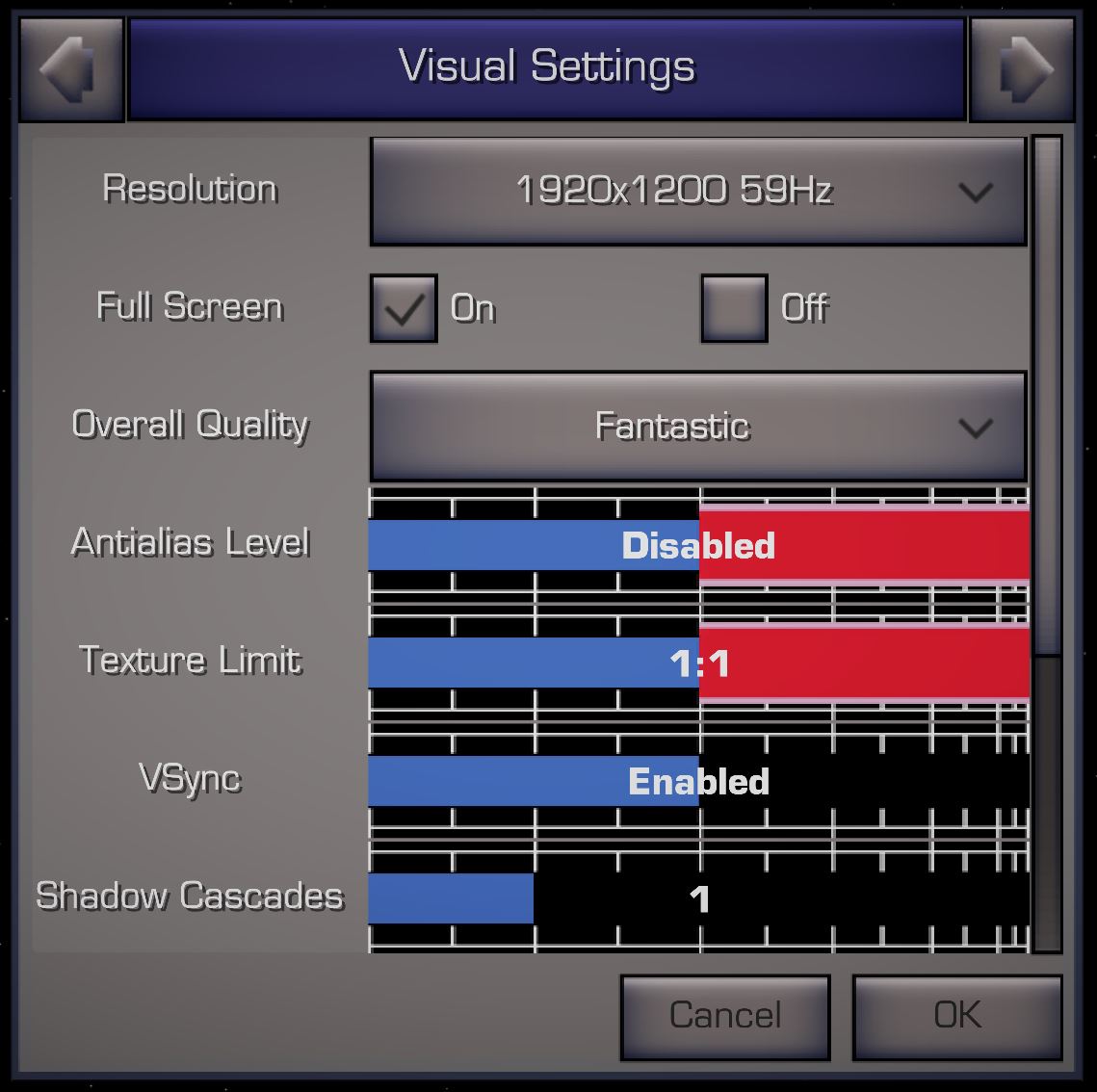 This Visual Settings panel is mostly self explanatory, although some settings are a bit esoteric.

The Overall Quality selector allows you to choose a general set of graphical fidelity from Lowest to Fantastic.

The sliders below the quality selector are overrides to it, in case you want to tweak particular values differently from what they are by default.

There is not yet a concourse in XWVM, so instead you select your mission from a menu, much like it was in X-Wing versus TIE Fighter. 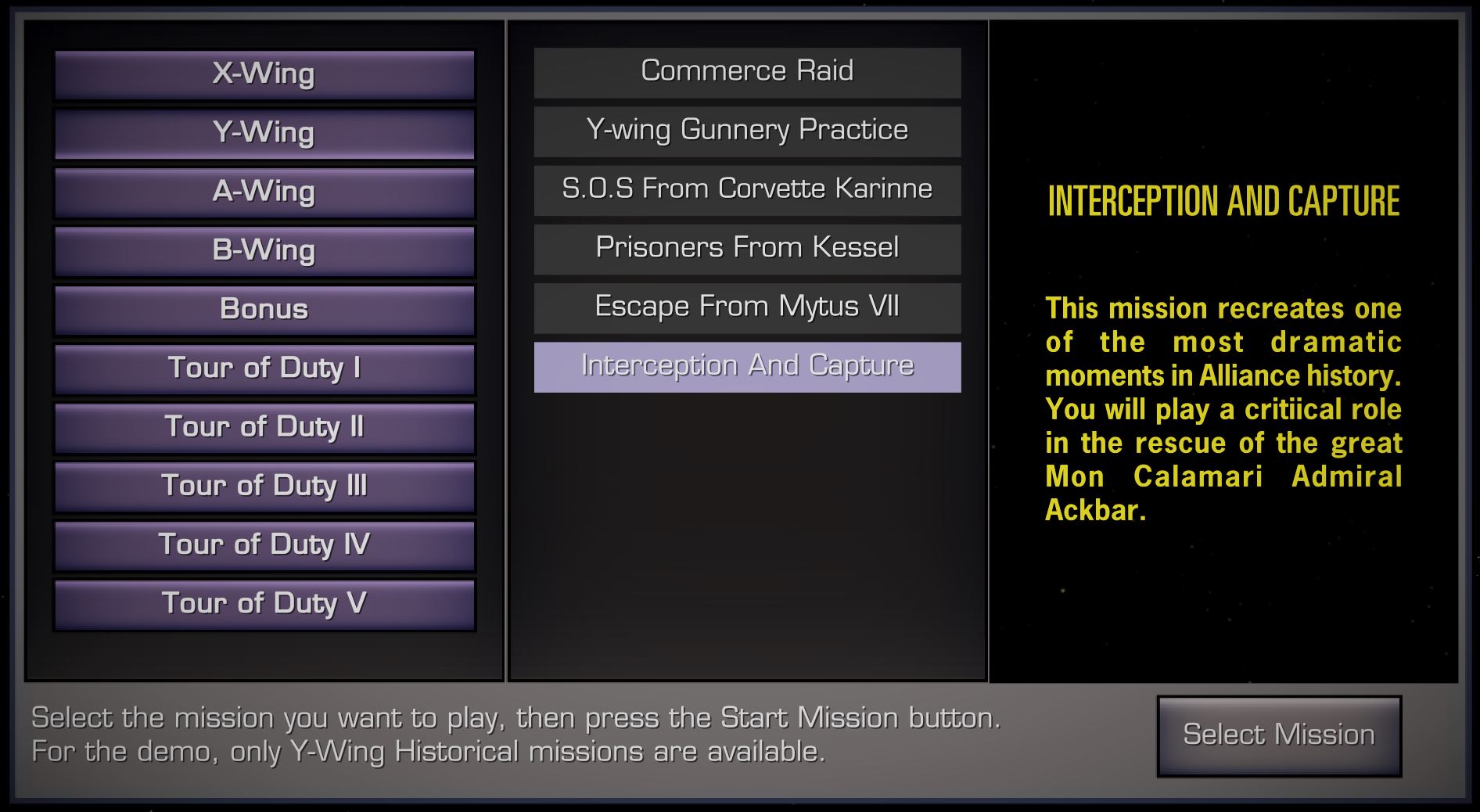 For the past months, we have focused on making the Y-wing Historical Missions playable. These 6 historical missions are our test bed and you should try to thoroughly play through them.

Some missions were reissued by LucasArts in later editions of the game providing an alternative rebalance, since the original release was too difficult, or its difficulty was too much depending on randomness.

If you attempt to play one of these missions, XWVM will give you the choice of what revision you want to play. 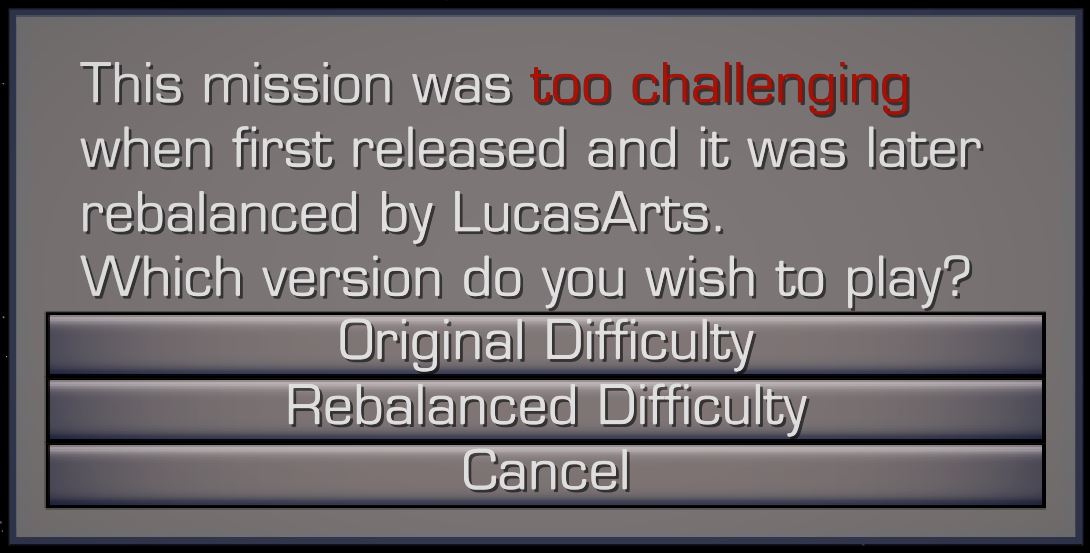 The original difficulty is most of the time a bit higher. In other occasions, its considerably higher. 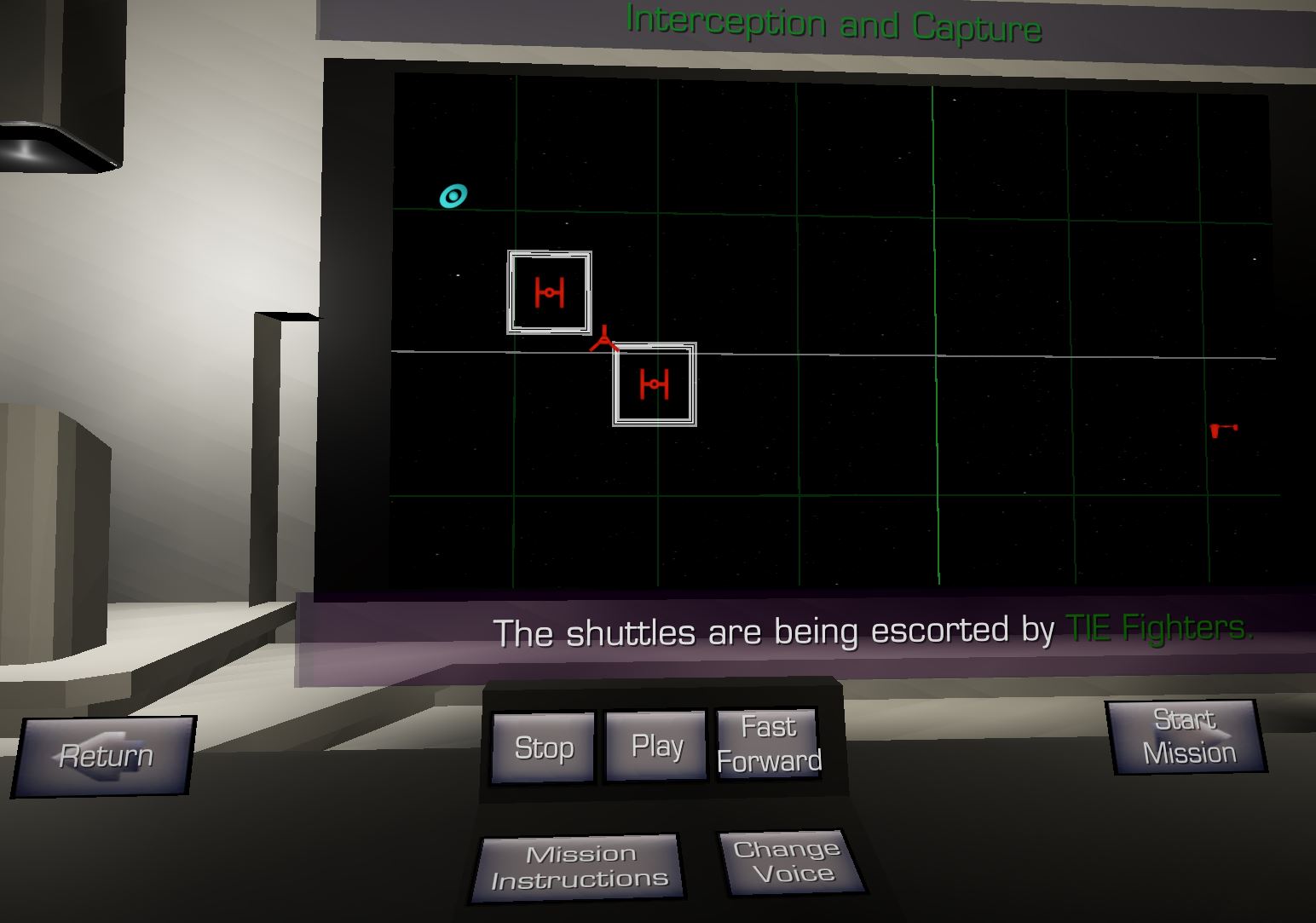 Both General Dodonna and Admiral Ackbar are available for mission briefings, so pick your favorite rebel to boss you around, then jump onto your ship by pressing the Star Mission button. 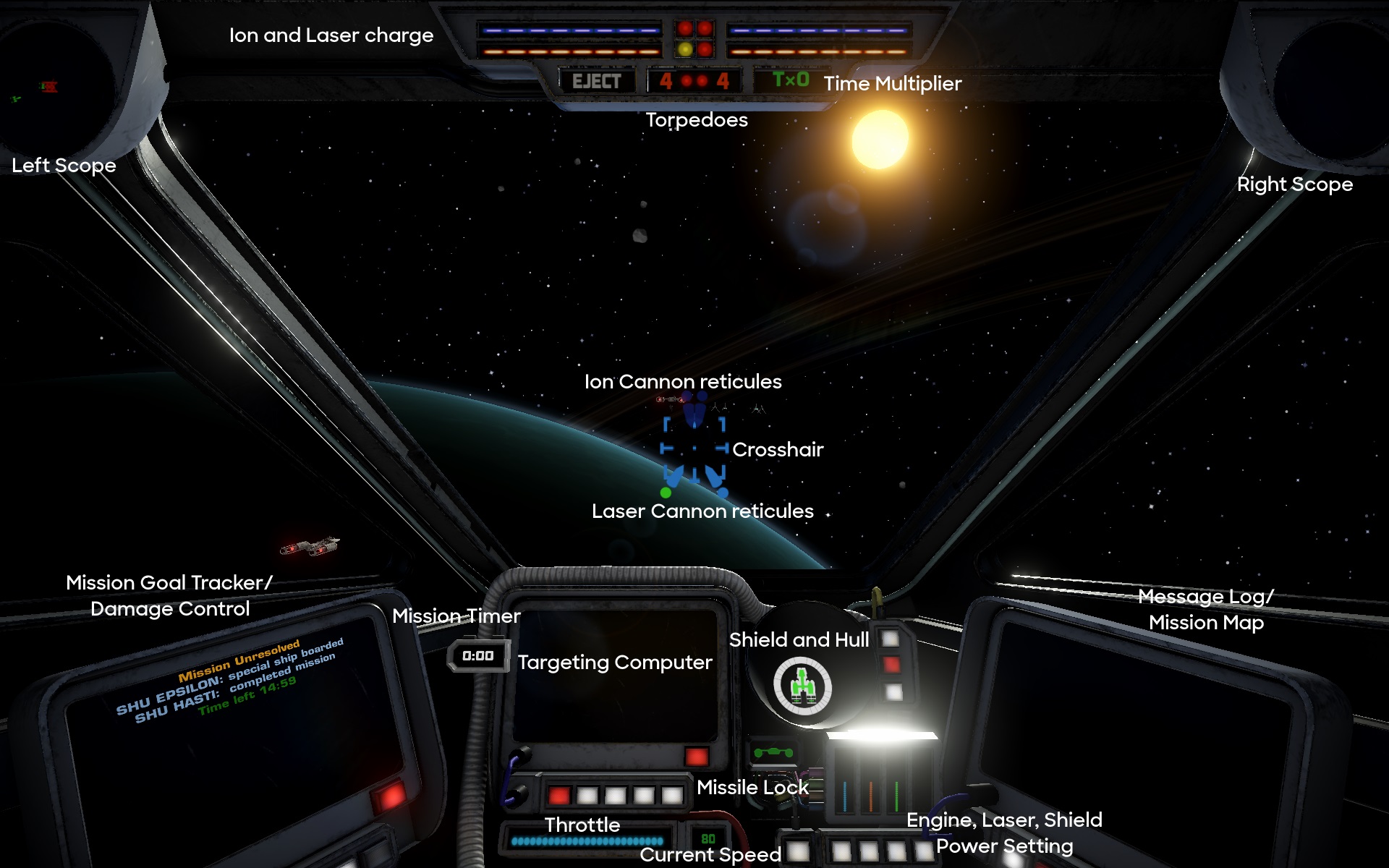 The Y-wing cockpit in XWVM is roughly identical to how it was in X-wing, and X-wing versus TIE Fighter. Some new features (marked in bold) have been added since those games, though, and might require some explanation.

If you think you have found a problem not listed in the Known Issues section below, please, report it.

Try to note down the steps you need to take for the error to happen. Check whether you can reproduce the problem every time following these steps.

Then, go to this address:
REPORT ISSUES.

If have a look at the other issues present. If you cannot quickly find some other identical issue, click on the Create Issue button at the upper right corner and fill up the form.

Feel free to also comment your problems in the GOG forum, Facebook group, or here. Perhaps someone else has encountered the same problem and can help you.

When playing the game, please keep in mind we are already aware of some issues that you will encounter. Please, don't bother reporting these issues.

That is not fair. I have been follower here on all news, and sharing it on Twitter, but I had no idea there has been sign-up for pre-alpha testing... :(

I have two different kinds of flightsticks, have dual-system (Dinput/Xinput) gamepad, and I also have DIY head tracking device "EDtracking", that can be used directly as 3-axis joystick, or translated to work like TrackIR and several other tracking solutions (via "OpenTrack"). Maybe I still can be useful for early testing.

We will extend the test group once we get the test process going. Patience! :)

it is about time somebody bought this game back and updated it to fit in with todays specs. with all the new star wars movies out there it would be
good to be able to play a two player game with the new version of the tie fighter like the one in episode 7 the force awakens. also what about being able to control things like star destroyers or even fly the flacon.
so please keep up the good work. me and my friends are waiting with baited breath. thanks