The long awaited release is finally here! With a new balancing system, new units, and new designs this is the best version yet!

Well it's been a long year but we've finally got something here that we think deserves to be officially released. This is the new version of the Original 3 mod, using our own custom balancing system and unit classification system making it a unique playing experience for any seasoned CNC 3 player. And with our custom Xenoforce AI's to go against old pro's will have a lot of new challenges to try.

There are a lot of new changes here, almost every single thing has been modified in some way, so it would be impossible for us to give an entire rundown of what has changed here. However I will go into detail on the more general changes.

First we will talk about the general changes. The Xenoforce Reborn Mod is currently using a Class/Teir system. What that means is that each unit in the game falls into 1 of 4 different Class's.

Offensive units are units designed to take a hit. Their health is set to 50% higher than what it should be for a unit of that Armor Teir. Assault units are units designed to get first hit in. Their attack range and damage output is set to be 25% higher than the weapon the unit uses allows. The 3rd class is Repair, these units are designed to keep others operating in the field. Finally you have Utility class units. These are Units that have a lot of different special abilities or powers giving them an extra edge in specific situations.

The Teir aspect of this design is very simple to understand. Each unit has a Weapon / Armor / Utility teir set. A unit with a Weapon Teir of 1 is able to easily deal with enemies that have an Armor Teir of 1 as long as that weapon is designed to deal with that unit type. So a unit that has a Weapon Teir of 3, Armor Teir of 4, and Utility Teir of 2 will be able to deal with enemies that are Armor Teir of 3 pretty easily while being able to survive anything lower than a Teir 4 Weapon pretty easily as well. Finally that Utility Teir of 2 means that this unit has at least 2 special features, be it detect stealth, stealth, generate funds, extra armor, ect...

Second up is GDI. 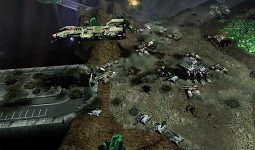 The GDI forces are all about deployment. Their most powerful units are able to be deployed to the field easily and for free giving GDI the ability to build up a massive force of units and then pound their enemies to dust. GDI forces specialize at two different types of tactics, Swarm Attacks and Seige Campaigns. With many different choices to pick from for artillery attacks, the ability to deploy 3 different types of Zone Armor Troops with Defensive Rig support, and the venerable Kodiak Escort Class ship to go to if everything starts going south GDI is a hard force to deal with. 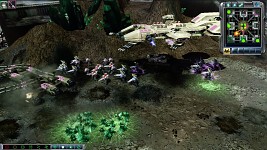 Third up is NOD. 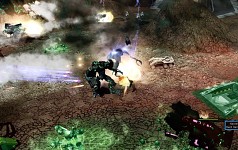 NOD has undergone a major change. They are now the centerpiece of our storyline. After the 2nd war and CABAL was defeated NOD needed a new leader to help them move forward after the loss of Kane. In the end the NOD that emerged from that 2nd war was nothing like it's older self. NOD was transformed into a multi-billion credit company run the Memory Matrix AI LEGION. LEGION had 4 specific lines of research that it had NOD focusing on. In game this means that there are 4 different Doctrines that the player can research to give their units an edge against the Scrin Forces that LEGION knows are coming. After all, who would know better at how to defeat an enemy than one of their own AI's?

The Sector 9 Doctrine is designed around building a cybernetic army of super-soldiers. These forces are made with the idea to make the ultimate secret units that are easily produced off the assembly line. Using the brain scans of Natasha, one of NOD's most effective and lethal special agents Sector 9 has been able to make mechanical recreations that are faster, stronger, and much more deadly than the original could ever be. Sector 9 also focus's on Laser Technology giving many of their units some form of laser weapon type with their upgrade.

The Homeland Defense Doctrine is designed around needing a first response team. Soldiers equipped with powerful armor, flamer and melta weapon technology for dealing with Scrin Shields and rapidly teleporting infantry forces, and missile packs that allow them to fight an enemy no matter where they are.

The Tiberium Guard Doctrine is based around the realization that no matter what the Scrin would be able to get to the Tiberium on Earth. So Legion focused these forces around being there when they did. Able to work in small groups, equipped with powerful kinetic weapons with thermite ammunition, these forces are the last line of the NOD defense against an enemy they know are coming.

Finally the Black Operations Doctrine are the one force that LEGION decided that NOD needed to deal with GDI forces. LEGION had no direct quarrel with GDI but it also knew that GDI would not let it go unchecked with it's preparations for the Scrin. So it developed the Black Operations teams, forces that were designed to keep GDI at bay and off balance long enough for the rest of the Doctrines to come to fruition. Black Operations teams have different powers and abilities that they use to hit the enemy right where it hurts.

But thats not all. Legion knows that no matter what it does to prepare for the Scrin that it would need something special for dealing with Scrin Capitol Ships. The Salamander would be sufficient to counter GDI Air units and Kodiaks but for the Scrin it needed something special. And for that it built the Medusa Memory Matrix. This special structure takes 15 minutes to go from built to completed, but even at 25% completion it's able to act as it's own base. It produces its own money. It produces its own power. It produces it's own structures. It is a base all on its own. But once it deploys its a completely different beast. In the air it's main purpose is to be able to destroy Scrin Capitol Ships while staying far enough away to not worry about enemy fire. And finally, if Legion finds that all is lost it can use the Medusa to escape this Solar System and start over elsewhere. The Medusa is LEGION's escape plan. 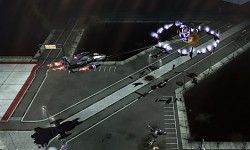 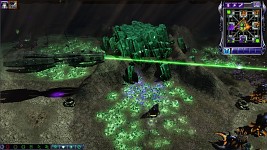 Finally we have Scrin 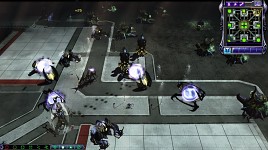 The Scrin are a completely alien force in the game. And they are at war. They use Tiberium to survive, to expand their galactic empire, and to make sure that they are the only race that lives. For thousands of years they did this sucsessfuly, sending meteors covered in Tiberium to different planets and then years later moving in to harvest the crop.

And then they came across a planet that did not seed properly. They came across the new home planet of the Invid. The Scrin / Invid war has gone on for centuries. It is now coming to a close with both forces on the brink of collapse. The tipping point is that Tiberium, the energy source that the Scrin use, and Protoculture, the energy source that the Invid use can not co-exist. Tiberium corrupts and destroys Protoculture, but Protoculture is a much purer and more powerful source of energy. Now there is only one planet left that is ready for harvesting according to Scrin Sensors. This planet was not due for harvesting for another 30 years but with an entire planet ready to harvest it would be just enough to tip the war into the Scrins favor. However there is also a Protoculture energy pulse coming from the planet so the Scrin need to get there and remove it before the Invid find it and move to stop them. They can not afford to lose this planet. Their entire civilization could hang in the balance.

But they were not expecting the planets original population to alive when they got there. They never expected the floating cylinders in space housing millions of humans, or the massive number of troops scattered across the globe fighting each other, armed to the teeth. And the rich fields of Tiberium ready to be harvested were not there as well. Someone or something had tricked them into coming to the planet early. And they are not happy about this. 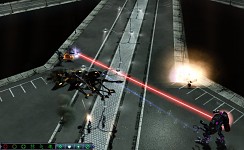 But the key force of the Scrin army are the Scrin Capitol Ships. These powerful flying fortress's are a match for anything else on the field weaker than a Medusa Memory Matrix. These ships are able to deal with enemy forces that would stop an entire enemy army. And they are able to be mass produced. Given enough time nothing can stop a Scrin Capitol Ship force in mass. Nothing. 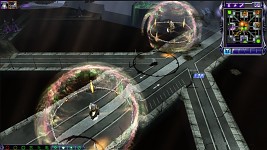 I have no idea why your not seeing it under downloads. Its the first thing to choose from. I left the 1.1 up as well because players may want to either try the older version to see how it's changed or prefer the older system.

We don't support Desura, have never been able to figure out exactly where Desura wants the files to do a compile for it. We were not the ones who started the Desura page, MODDB did.

It's not hard to install the Mod from MODDB. There are instructions in the forum on how to do it. It's just a case of put the directory under Tiberium Wars / Mods in the My Documents directory.

If we could get better instructions on how Desura wants the mod set up then I would be willing to give it another try. But the last 3 times we tried it simply didn't work.

thanks but i downloaded my copy of c&c 3 tw form the pirate bay .so how can i use the new mods ..i play your mods thousands times over please help

Just install the mod to your version of My Documents.

Like for example on Win XP you place it here.

extract the mod there and then you run the control center and click Game Browser tab and MODS tab. You should then see Xenoforce O3 V2.0 as an option.

There are better instructions on the forum based on your version of Windows.

thanks man my only problem thou is i did all that but no command center im download 1.09 now see if it pops up o that version

The command center is accessed through a shortcut change.

how to fix conflict with emulation software

Emulation software? Are you not running on Windows?

i got it i was dtools had unstall it..i played it ..wow only problemm takes so long for kodak to be use

I'll take that as a good wow. Yea, it does take awhile. The idea is it's what you use when everything else isn't working. GDI doesn't have a ton of them so they only allow deployment in the worst-case situations.