An update on results of playtesting and what's delaying the release.

Greetings!
This will be a little update to break the silence after last playtesting.
Thanks to reports from roughly 1.5 persons, I was able to detect some serious bugs.
First of all, thanks to mittorn I've made progress on identifying hang on level change in singleplayer - guess what? Half-Life engine destroys case of map name internally and, when comparing to real name (which contains lettters in uppercase, like "CO_ArcticIncident00"), doesn't see shit. I mean, if you're writing code that strlwr()'s other people's stuff, use case-insensitive strIcmp(), dammit! But no, modders gotta suffer. BUT NOT ON MY WATCH! 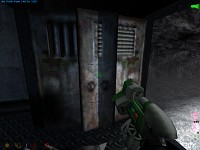 There were also some very annoying mapping bugs: originally, sv_zmax on coop maps was too far and because of that, VIS compiler (that decides what should be shown in the game from a specific point of view) made far locations virtually "visible", thus enabling drawing of all monsters and effects (like snow). Also, I've disabled drawing AND updating of snow ouside of visible locations, a little bit ugly, but well... All of this chopped FPS down to half. Fixed. I'm punching those numbers into my computer it makes a happy face. 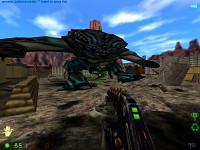 Also, while spending another night with Hammer, I've managed to fix that missing surface on DM_Circular everyone kept bugging me about. Tried to add more details. No chance. It just won't work my way. :-/ 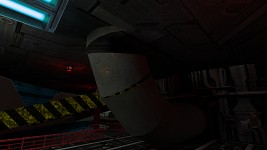 Anyway, I got rid of many problems and, hopefully, players will have less hard time recovering from crashes. At least particles look good. Foun dout more problems with save/restore and respawning items. OH, by the way! I've implemented partial picking up of items! Like you're touching a battery while having 99% of armor and getting mad because it added you just 1% of energy, yet is now completely wasted. Fixed that. Not for weapons, though. Yet. 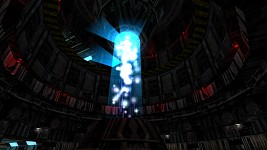 (no bugs on this screenshot, just looks nice)

Anyway, gotta smash more bots with trains. For science, of course!
Because trains love to crash. And bots. And Half-Life. And Windo##@*&$%^!#44--- *User connection timed out.

Really looking forward to this! The delays are unfortunate, of course, but we all know that bugs and things crop up and can't be predicted (and please don't think that we don't appreciate the hard work that goes into this great mod).

Thanks for your support!
It keeps me alive at those hard times when I want to drop everything )