While there have long been reports of huge creatures in the deep desert capable of consuming an entire sandminer, information on the legendary Giant Sandworm of Dune has been sketchy at best. [...] Crews on mining operations are told to flee at the first sign of any of these subterranean behemoths so visual documentation has been difficult to obtain. Until now.

Report to CHOAM Interplanetary Commerce and Trade Regulation Board

URGENT REPORT: EMPEROR'S EYES ONLY
While there have long been reports of huge creatures in the deep desert capable of consuming an entire sandminer, information on the legendary Giant Sandworm of Dune has been sketchy at best. Even the Imperial Plantetologist tasked with surveying the planet has been a poor source of information about these beasts. Few Spice operations venture into the deep desert for fear of the creatures, since the Southern reaches are said to be home to specimens as large as a Guild frigate. Crews on mining operations are told to flee at the first sign of any of these subterranean behemoths so visual documentation has been difficult to obtain. 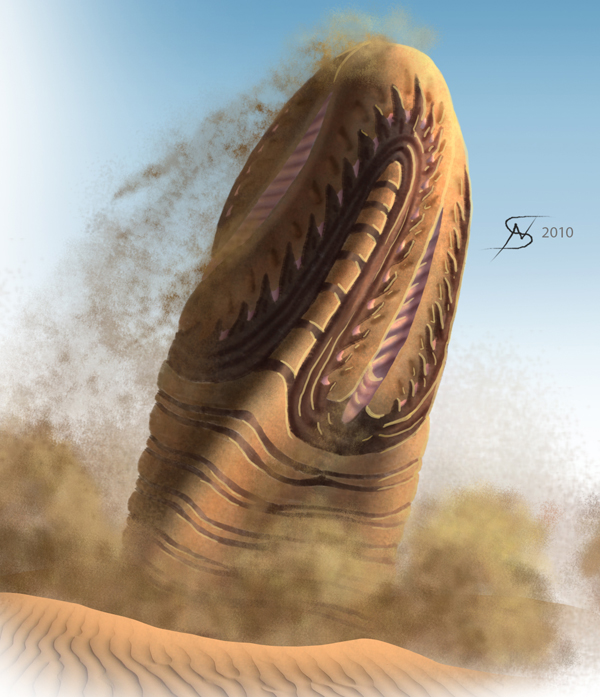 The creature pictured was spotted by the crew of a temporarily downed Carryall, part of a Spice Harvester's spotter crew and which also happened to have one of our operatives embedded. He was able to obtain holo-recordings and constructed these diagrams using direct observation and anecdotal evidence gleaned from his interactions with the native crew members. Some of this information may be suspect, however. Pictured, for instance, is a troop of the native Fremen tribesmen actually riding the back of these monsters. This has never been directly observed by off-worlders and is probably a local tall tale.

The Worm was seen to burrow with amazing rapidity for an animal of its massive size through the twisting of its body through the sand in a helical motion, much like the action of a high-powered drill. When on the surface, however, it progressed similarly to a snake using rhythmic pulsations of the segments along the length of its body. This would seem to indicate that the worm can move much more quickly underground than it can on the surface. The Worm has no visible sense organs and is believed to navigate and hunt using surface vibrations detected through sensory pits on its forward section.

These creatures are massive, and are reportedly immune to the destructive effects of the powerful sandstorms on Arrakis, which reduce all other creatures and materials to dust and ash. Little is known about their life cycle, feeding habits or vulnerabilities so they should be treated as hostile wherever encountered and avoided with extreme care.

We hope you’ve enjoyed this sneak peek into the development of Dune: War of the Spice. You can follow us on Twitter, subscripe our RSS-feed and join our forums. We aim to post regular monthly updates as we have new work to show.

Dune: War of the Spice is a new fully original Real Time Strategy game loosely based on the Dune novels of Frank Herbert and following in the footsteps of such games as Emperor: Battle for Dune and Dune II: Building of a Dynasty. The game follows the exploits and conflict between the three Great Houses of the Atreides, Harkonnen and Ordos in their fierce battle for power and control of the Imperium, as well as a number of Subhouses that try to use the conflict to their own advantage.

We’ve been concentrating on the Harkonnen faction for the time being and hope to add new art for the others as our output increases, we’re always on the look-out for talented 2D and 3D artists to contribute. For information on joining the project please click the Jobs Link to the left.

good update hey i got question about the unreal engine is it really possible to have base building gameplay?

It's just a game engine. While it may be more convenient to make one style of game over another, it's not impossible.

How do fremen ride a spining worm? ^^

read the text, the worm doesnt spin on surface. (;

I can't remember from the books whether they spin on the surface or not (I've not read Dune itself in about 5 years now), but the riders use hooks to peel back the the rings around its head, so that it cannot roll or burrow back into the sand without intense pain.

Maybe it would be cool to do a reimagining, rather than the basic worm art style of every Dune game in the last 15 years. Especially with the worms. They were never the most intimidating looking things in the world.

And it does sort of look like a *****, as pointed out by another commenter :D

Just looking through other pieces of artwork I get the feeling i've seen all of this before (apart from the flamethrower unit). The buzzsaw type bike was in Emperor, wasn't it? Needs a direction of its own, I think.

Sorry for being negative here, but I think Dune games these days need more originality. Copying older (quite awful) games isn't exactly a model for success!

I do like that whoever writes these news updates appears familiar with the Dune books though. Nice to see people using the universe they set their game in for marketing purposes, rather than just the in game looks / theme!