This week we are looking into the world map and the biome generation.

The world will be divided into squared areas. Each area will represent a biome, a capital city or other predefined areas. For example places for a boss fight. (Yep, not every boss fight needs to be in a dungeon!) 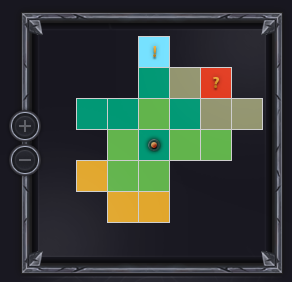 The map will show the dungeons you have found and how many dungeons are left. Sometimes there is more in an area like secret locations, quests or teleportation stones. Teleportation stones will be crucial to find, there aren't so many of them, but they will help you a lot! Guess what they are doing ... :)

Concept: Example tooltip for an area

Areas will be fully surrounded by a mountain chain and are connected with other areas by a passage, which brings you through the mountain.

In a few weeks we will have implemented this system and will provide you with more details and in-game screenshots. This approach of areas / biomes has some really cool advantages:

One world map area consists of one biome. You will need to move for a few minutes to get from one side to the other. The exact size of each biome needs still be determined, but there will always be a few dungeons and other interesting locations.

In the last days we tested the voxel-size for our world generator. We have tested voxel-sizes between 0.25x0.25m² and 1x1m². (Click to enlarge them!) 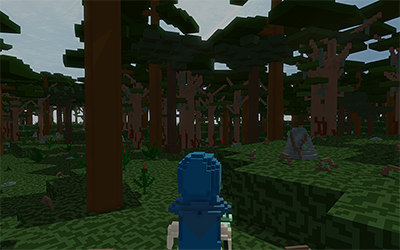 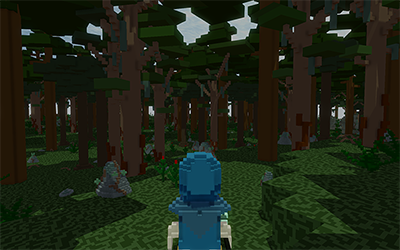 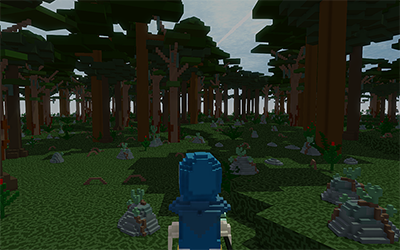 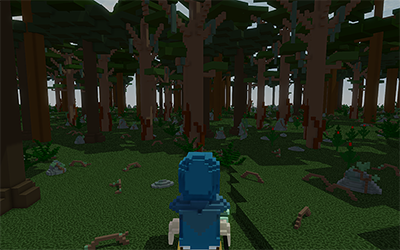 It's important to find something that makes fun, looks good but is not cpu or gpu costly. The smaller the voxel size gets the more are needed to fill the same space in the world and that means longer chunk generation times. The smaller versions make me feel like I'm a giant, so at the moment our favorite is the 0.75x0.75m² voxel size version.

Last week we've shown a not optimized prototype version of a jungle world. Our first voxel-engine algorithms are done, so let us compare it to last week: 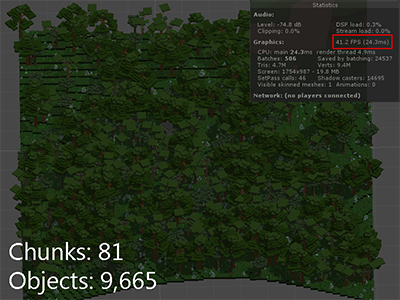 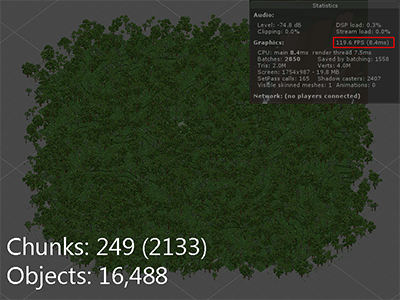 The view distance is three times bigger and there are almost twice as many objects, but the FPS went up from ~40 to ~120. I'm certain I will have one whole article about optimization any time in the next year. (For people who are interested in more technical stuff!)

While you are travelling through a biome you will encounter animals, monsters and villagers and find small villages, teleportation stones or traveling merchants. But also you can discover entrances to dungeons. In dungeons you can find the greatest treasure you can dream of! But it is challenging and you may bring a friend or two with you. 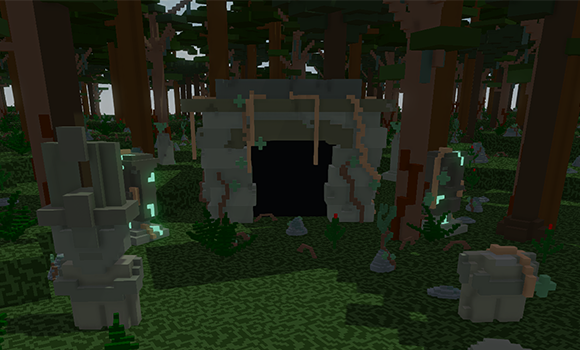 We really want to show you more biome stuff yet, but we still need to develop a few systems for the game before we will focus on content like biomes. But we already have some ideas for biomes:

We definitely will have snow and desert biomes. In the snow biome the dungeons will be crystal caves and in the desert there will be huge pyramid structures you can explore. In case you did not noticed it yet: Jungle biome and its structures is inspired by the Maya civilization. Also there will be a volcanic biome, just to name a few ideas. If you have an idea as well, just let us know your ideas! Next year we will have in-depth articles about each biome (with screenshots of course!).

That's it for this week. If you have any ideas, suggestions or feedback feel free to post them in the comments!

Here are our Last Asked Questions for this week.

"Will there be some kind of mounts to have a faster move speed?"

Quite early you will learn how to use teleportation stones. They will let you travel instantly to the capital city or different biomes. In a later stage, when you have trained your pets enough, you will be able to ride them.

"When will the game be released?"

That's the most asked questions until today. We're aiming towards the end of 2017 for the full release. We want to improve and polish the game on all ends until we set it to 'Released'. Help us by spreading the word and telling your friends about Dungeons of Tal'Doria! We will not be able to make it without your help. In an article in the beginning of the next year we will provide more details about the release plan and the road map.