Witcher Kings 0.8.0 is now released, and compatible with vanilla CK2 2.7.1. Witcher Kings mod is a total conversion for Crusader Kings 2 set in the universe of The Witcher. 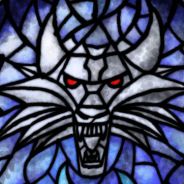 Witcher Kings mod, a total conversion for Crusader Kings 2 set in the universe of The Witcher, is now compatible with the latest build 2.7.1.

It is mainly a compatibility & bugfix release, but also has a few new features, described below.

This release doesn't include societies and artifacts, but this will come with a future release.

For more information on the mod, checkout the Witcher Kings wiki page.

The Dice Poker mini-game from the Witcher video games has been integrated to the mod !

It started as a technical challenge more than a year ago, and few implementation struggles later, it became a multiplayer-compatbile targeted decision and event chain ! 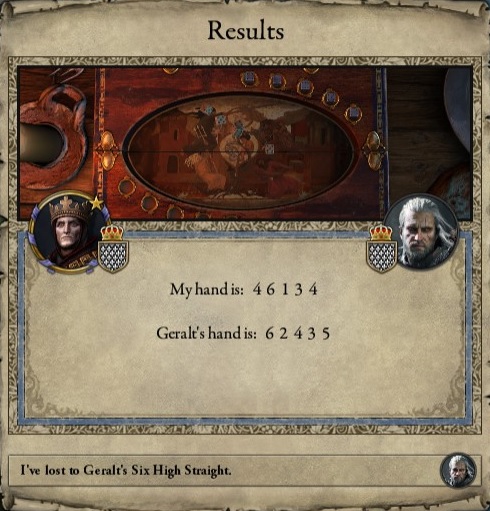 The rules are based on TW2, mainly because it's a slightly easier to implement than TW1.

Each game consists of a single round, composed of two rolls:

There was already a Gambler lifestyle trait in the mod (though not used in events). With WoL it became somehow redundant with the Game Master lifestyle trait.
So it has been switched to a personality trait:

As a comparison, if a Gambler can hardly resist playing few dice games in the tavern, a Game Master would make it a full time job and participate in high stake tournaments.

The gambler trait has been added to canon characters based on the video games, and will appear randomly on generated characters.

Play a game of Dice Poker

The mini-game is triggered via a targeted decision.
It requires the characters to be at the same location, and the AI will accept if:

Because CK2 doesn't simulate the economy for courtiers, they are usually poor (0 gold), so their wealth is not a condition (they'll just have negative gold if they lose) 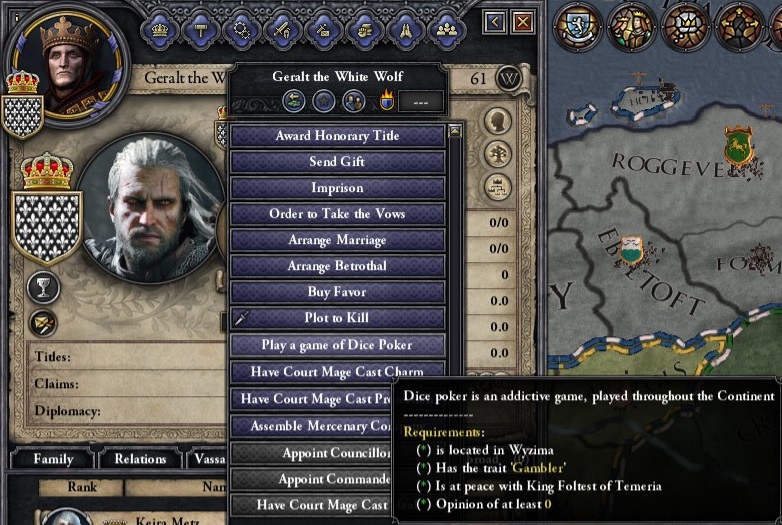 The game events work from both sides (i.e. should work in multiplayer), so the player may sometime receive an invitation from a wealthy gambler AI at court (with an anti-spam timer).
The decision won't be used between AI characters, for performances (and because it would be pointless, as a simple event could simulate the 50/50 outcome).

The decision does not require the player to be a Gambler, and in fact winning a game gives a chance to gain the gambler

Which dice to re-roll ?

It's possible to select the dice to re-roll one by one: 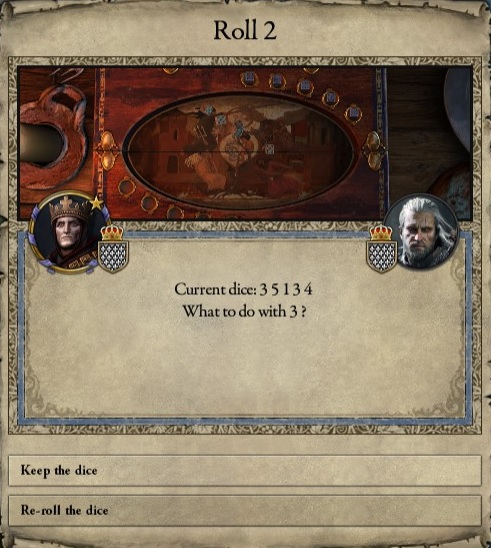 But it's a bit painful, and most of the time you just want to keep your Pair or Three-of-a-kind, and re-roll the rest. And this is also needed for the AI !

So there's an option that the player can chose to keep all dice with rank 1 and rank 2 values, if any. 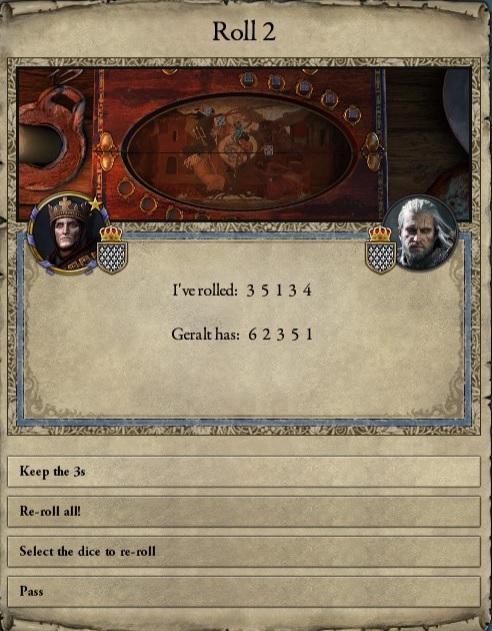 There's a bit of an issue with the random number generator: it's not completely random...
Because all events happen instantly, the same seed is re-used, and it happens that both players will roll the same values, except for a shift of one dice...
Now, with CK2 patch 2.7 and some hidden ping events, it seems a bit better, but no guarantee that the game is not rigged !

The mod has some opposite congenital traits "Lucky" and "Cursed", that are not widely used in events yet. It could be interesting that these traits sometimes influence the dice roll, making lucky character slightly more likely to win. Currently you just get a chance to gain the Lucky

trait by rolling a Five-of-a-kind combination.

High stake tournaments, with larger bets and multiple games/rounds could be suitable for a game master lifestyle.

Some fictional baronies have been added to some regions (Aedirn, Angren, Kaedwan, Kovir & Poviss, Lyria Rivia and part of Nilfgaard) for the prosperity mechanic of Reaper's Due expansion, courtesy of tsf4.

This allows to build new settlements past the historical maximum of the province, up to the game limit of 7 baronies.

In addition some fictional names have also been created to avoid duplicated baronies names in the same county.

The potential of the mod is huge, and the team is very small, while there's still a lot of ideas to be implemented !

You can help by:

- Upper Aedirn is always vassalized by Henselt, no matter who wins the war (or if the war invalidates). The cause is still unknown...
- Conclave education focus output is overridden by the existing system where education is decided by event.

Features:
- Implement a Dice Poker mini-game
- Rules are based on TW2 (single round with two rolls)
- Event chain is triggered via a targeted decision, requiring characters to be at the same location, and the AI will accept if it has the Gambler trait, has a positive opinion of the player, and is not at war with the player.
- Change gambler trait from lifestyle to personality trait
- Add canon characters with gambler trait, based on video games
- Create fictional baronies (Aedirn, Angren, Kaedwan, Kovir & Poviss, Lyria Rivia and part of Nilfgaard) for prosperity mechanic, courtesy of tsf4
- Create fictional baronies to avoid duplicated names in same county, courtesy of tsf4
- Remove decision toggles, as patch 2.7 has made the intrigue UI larger
- Add heal/protect spell decisions for filter=self, as required with patch 2.7
- Add obedient (AI accepts diplomatic interactions) and non_interference (AI doesn't take hostile actions) to the charm spell.
- Add an off-map job action to court magicians, to prevent the idle councillor alert icon
- Tweak some music DLC triggers based on religions & cultures and add missing ones
- Merge music DLC titles & volumes info
- Use a trait hidden from others for Saskia, allow her to marry but being infertile.
- Use "Church of" prefix for the Eternal Fire religious title
- Use "District of" prefix for some Novigrad holdings
- Rename "Wieczny Ogien" province to "Temple Isle"
- Rename "Wyzima Castle" holding to "The Royal Palace"

You are doing a fantastic job with the mod, especially considering the lack of help. I wish I could help, but, besides history files, there isn’t much I can efficiently do with CK2. Keep up the good work!

In case you're interested, there's been some demand for a Witcher 3 bookmark (Third Nilfgaardian War) that would need history modding :p

Well... I’m up for it. Any directions or instructions for it?

For info I've added 2 known bugs in the release article:
- Upper Aedirn is always vassalized by Henselt, no matter who wins the war (or if the war invalidates). The cause is still unknown...
- Conclave education focus output is overridden by the existing system where education is decided by event.

Do you have any leads as to what causes the upper aedirn issue? I know that was one that I found, and made my try as the young king particularly annoying

It's likely a bug in CK2 engine, but I can't really open a ticket without narrowing what triggers it...

I'll workaround the issue in next patch, as was suggested by KorrJaden

Question: is their any way to remove Saskia's infertility trait? like an event or something? or is it a permanent fixture?