Another newspost, this time some talk about ... Animals? And a preview video of the wind grenade animations AND what it does ;)

Gonna start this time with a quick progress report

Progress:
- The wind grenade has been coded and works, "explosion" effects are not final nor are sounds.

- Outpost received several updates and is in it's final stages

- FragOut.fgd has been made and works, it includes the first health pickup ... the duck! read more about it down below :)

- Phanrack joined the crew of devs as a 2d artist, he basically does decals, textures, skins, hud icons and more!

- Also Eccentric and Soulfather(from Kreedz mod) agreed to map for FragOut, Eccentric doesn't want to be part of the dev list until he actually made a map and I'm not sure wheter Soulfather just wants to contribute one map or fully join the team, but he's already been with us on one test yesterday, talking our ears off :D

However there is still not a way to decide a winner so changes may be made when needed.

- The duck, pig and cow models have been pretty much finished, read more about them below!

- We now have a website which is hosted by Half-Lifecreations this also got us access to SVN and FTP hurray!!! You can check out the FragOut website by clicking here.
Thanks HLC! The webmaster of our site is Nauz, so if you have any suggestions for it then send him a PM or email :)

That's right.. Animals! They will form your primary source of health in FragOut, functioning like old school pickups but with a twist... they're very much alive and will have different animations that the mapper will be able to choose(at least that's the plan :D)

The first 3 animals are done they are:
- The duck: Delicious and awesome, but small healing a good 25 hp dude!
- The pig: Fat and ... fat? Being bigger and fatter then the duck he will heal 50 hp
- The cow: Huge beast compared to the duck and the cow, this will surely heal all of your hp, don't expect too many of these around though... MOOOO

Also here's a nice preview of all 3 in one picture: 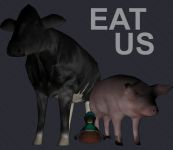 Decal pack #2 and Rebel/Combine skin preview:
Phanrack made a second smaller pack of decals for the mappers to use, containing some characters you may very well know. 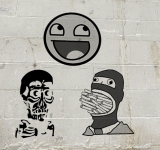 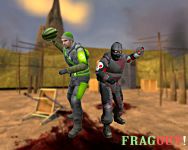 Sailboat Grenade video footage:
Last but not least, a video containing footage of the sailboat grenade animations and showing off what it can really do :D

That's all for now! Keep watching:)

You guys are insane... I LOVE IT! Man, that's gonna be quite tactical. Escaping manuevres, getting away from the Holy Hand Grenade, sneak aerial bombings! LOL! Cant wait!

This is probley one of the most simplest of mod ideas but really works well and you have done a really excellent job of making all these nice models and animations and making it more then just chucking grenades around a map.

hehe, that sailboat is awesome!

Really looking forward to this one. Nades ftw! :D

Heh, looks like something worth trying out.
Will the animals walk around and run away when being hit by explosives and stuff?
Also, I hope you guys take gameplay seriously.
I've seen far too many "fun weapons"-mods that haven't attracted any public because there wasn't anything new except for new, unbalanced weapons.
Best of luck, especially with the gameplay!

animals can't be hit, killed or scared away! only eaten :P

FragOut doesn't go for simply fun weapons we do strive for balanced play :)

That is we will when we have something more to balance.