This week we're announcing an unfortunate delay of 1 month to the release of the game. But it's not all Doom & Gloom we're going to be putting that time to good use and we've got plenty of great things coming!

As you might have guessed by the big, massive letters above: we’ve got a tiny, final delay.

So this delay is a bit of a mixed bag. A bit of good and a bit of disappointment — but before you cry out in dismay — we want to make it clear that we’re only delaying the release by 27 days. 27 final, no-more-delays days. The game will be absolutely and finally released on April 2nd (and after just over 2 and ½ years we’re preemptively declaring it a wondrous day).

The good news is that these extra few weeks allow us to add a ton of polish to the game (since we were already gunning for a March release, we now have some time to go back and add some extra flair to existing assets, and add a little extra polish to our campaign).

We’re sure you’re keen to know the reason for this final delay, and the truth of the matter is that there was a bit of a miscommunication between ourselves and PEGI. PEGI is the ratings board that is relevant to our physical, boxed release in Europe, and, because we are bound by this, our responsibilities to our backers who purchased boxed copies, and our commitment to release our game in stores, we have to wait an additional few weeks before release.

The miscommunication resulted in us having to delay our submission to PEGI, which means that our boxed copies of the game can’t be printed yet, which, unfortunately, delays our final street date. We hope that you will understand this one final hurdle — as a new developer we’re still at the tail end of the learning curve… and we’re confident that this final jump will be the last we have to leap over before the game is released.

The reason that our submission was delayed was a result of the addition of cutscenes to the game. Per regulation, these need to be evaluated by the aforementioned board before the game can be rated. It turns out that our cutscenes also need to be rated by the board, and if we had known this in advance we would have begun working on them much sooner. This terribly unfortunate miscommunication left our cutscenes incomplete when we submitted our game to the ratings board.

That said, in a few weeks they will be done and assessed by the ESRB, along with the rest of the game, at which point we’ll have our game confirmed and rated, and our manufacturers will be sent the OK to begin printing our boxed copies.

With all of those technical difficulties settled, let’s jump into a basket of good news and talk about what this delay means for the final release.

We’re happy to announce our “Early Adopter” bonus! Everyone who purchased the game during (or before) the first month of release will be given WFTO’s first campaign DLC for free.

This expansion will be a short campaign that supplements and adds to the story of the main campaign. It also contains a new Dungeon Theme for use in Multiplayer.

This DLC will be released in June of 2015, but as you’ve doubtlessly seen our deadlines our less important to us than delivering shiny, solid gold content to you. We’ll reveal more details about this DLC, in addition to our plans for numerous free updates, shortly before release.

So, why are we doing this?

It’s a bit of an experiment, and our attempt to replace pre-order bonuses — an unfortunately all-too-common practice that isn’t consumer friendly for a variety of reasons. Chief among them, they force a potential player to gamble on a game before there is any hard feedback on the final product.

Our hope with this offer is that players will feel encouraged to pick up the game at full price (ie: before any big sales) whilst still giving them plenty of time to consult reviews, YouTube videos, and friends for general impressions and information about the game before they make a commitment to purchase it.

To answer some quick questions about our Early Adopter bonus:

We’re going to start working on the map editor before launch and will be releasing it before the end of May. This will be a basic implementation of the editor that will allow players to create their own maps for Multiplayer & Skirmish, with pre-placed rooms, Shrines, Artefacts, minions etc. and then upload them to Steam Workshop for other users to use & enjoy.

In addition, you’ll also be able to create your own Skirmish AI personalities, customizing their build orders and behaviour, such as how often and how early they should attack, if they focus heavily on mining gold, etc. You’ll also be able to share these on the Steam Workshop. This feature will be released before the end of June.

We also want to be clear that at this time we don’t plan to include any scripting functionality in the editor, but we are investigating the possibility of including it at a later date and will keep you updated.

For those of you who may have skimmed the above:

And lastly, we just want to run through some dates and details for the next few months:

We’re sure that reading all the above has left you longing for some sweet sweet destruction; as such we’re going to close with some more concept art for the campaign map.

Unlike last week’s preview, which showed the map in it’s pristine and disgustingly goodly state, this week we’re going to show you how the fruits of your dark labour may look with a concept of the realm of Kairos post-pillaging! 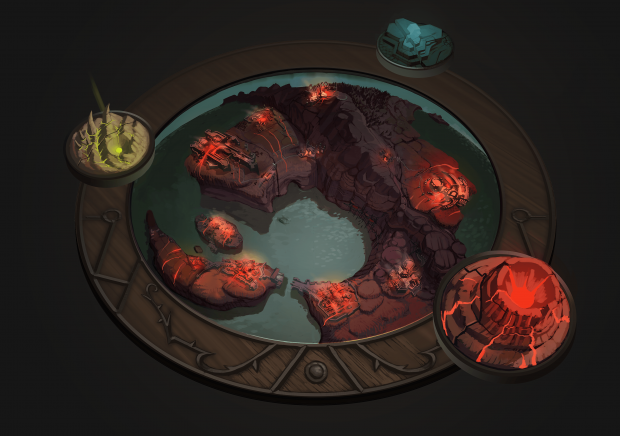 We’re sure you can’t wait to get started on your conquest, we know that today’s announcement may have been disappointing, but we’re still working diligently to deliver the game to you and can’t wait to see the havoc you will wreak once we place the future of Kairos firmly in your evil hands!

That’s it for this week Underlords, drop by next week when we’ll be returning to our normal schedule of development updates! For all our Kickstarter and crowdfunding backers — keep your eyes open tomorrow as we’ll be announcing the launch of our Backer Site!

April 1st would have certainly been a fishy date for us. We were originally headed for April 3rd but that date is a bank holiday in the UK.

Is the game really ready after only 2 years of development? That seems kinda short for an RTS game, or maybe I'm just thinking in Blizzard time...

I also don't trust that at all...
However, if they support and patch their game like Blizzard does it, then I won't have a problem with this development-time/release date

We'll certainly be ready. We'd love to have the budget and resources of a company like Blizzard as we really do want the game to be perfect on release.

However as an independent crowd-funded start-up working on our first project we have to stick to a relatively fixed project plan, lest we destroy ourselves and disappoint a great many of our fans and backers.

Ultimately we plan to support War for the Overworld for a long time after release, essentially as long as it is financially viable for us to do so. This is our baby, a game we've longed to play for many years and finally have the opportunity to do so; we want to work on it until we're happy with it and every little bit of support we receive both before and after release will let us continue for as long as we can.