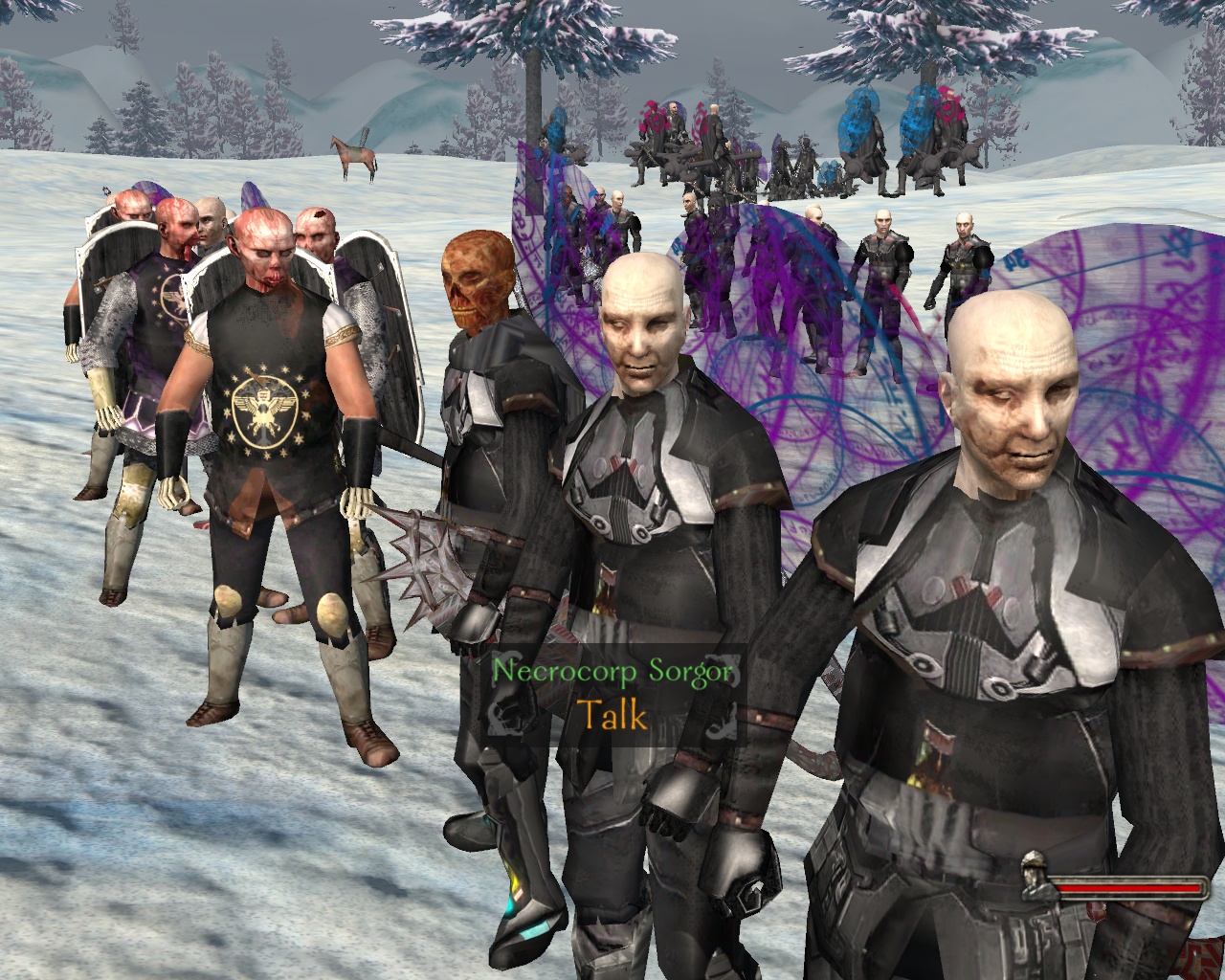 Weimear was a classical medieval kingdom. Purity of tradition, good training and heavy armors - that were faction advantages .

At least this was an image everyone saw. Only greatest lords of Weimear knew real source of their faction power. For decades nobles of Weimear sold their soul to pagan rituals. Year after year once powerful faction descended into corruption and decadence.

Their bodies had still power, but their flesh were slowly mutating. This wasn't primitive mutation - sickness of all cannibals. Cannibals eat human, or elven flesh. Weimear lords sucked vital powers of those who couldn't oppose, their subjects, villagers, towns people. 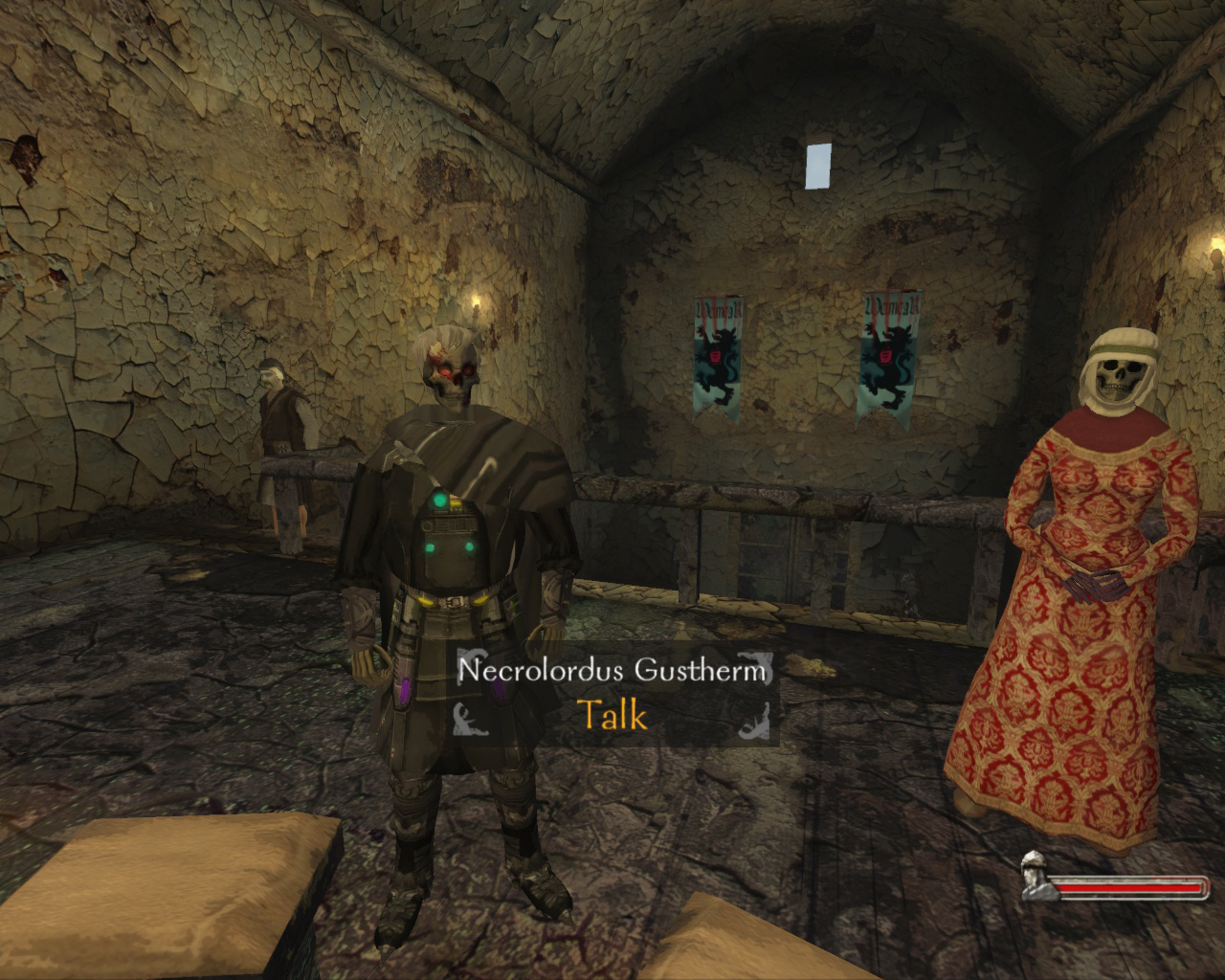 After all, consequences were more severe - Weimear lords one after one became rotting twisted, evil creatures. Far more intelligent, without chains of morality they could become dominant in Paradigm World. But first, they had to take over rule power on their own kingdom.

Still, corrupted Weimears were minority amongst of all people. Open attack would bring defeat.

Corrupted Weimears in secret started preparing coup. First step was to acquire better, new equipment. To do that, they used knowledge which they gained from ancient, three thousand years old books. There were diagrams of strange items, mix of technology and magic. Technology based upon vital powers of living creatures. 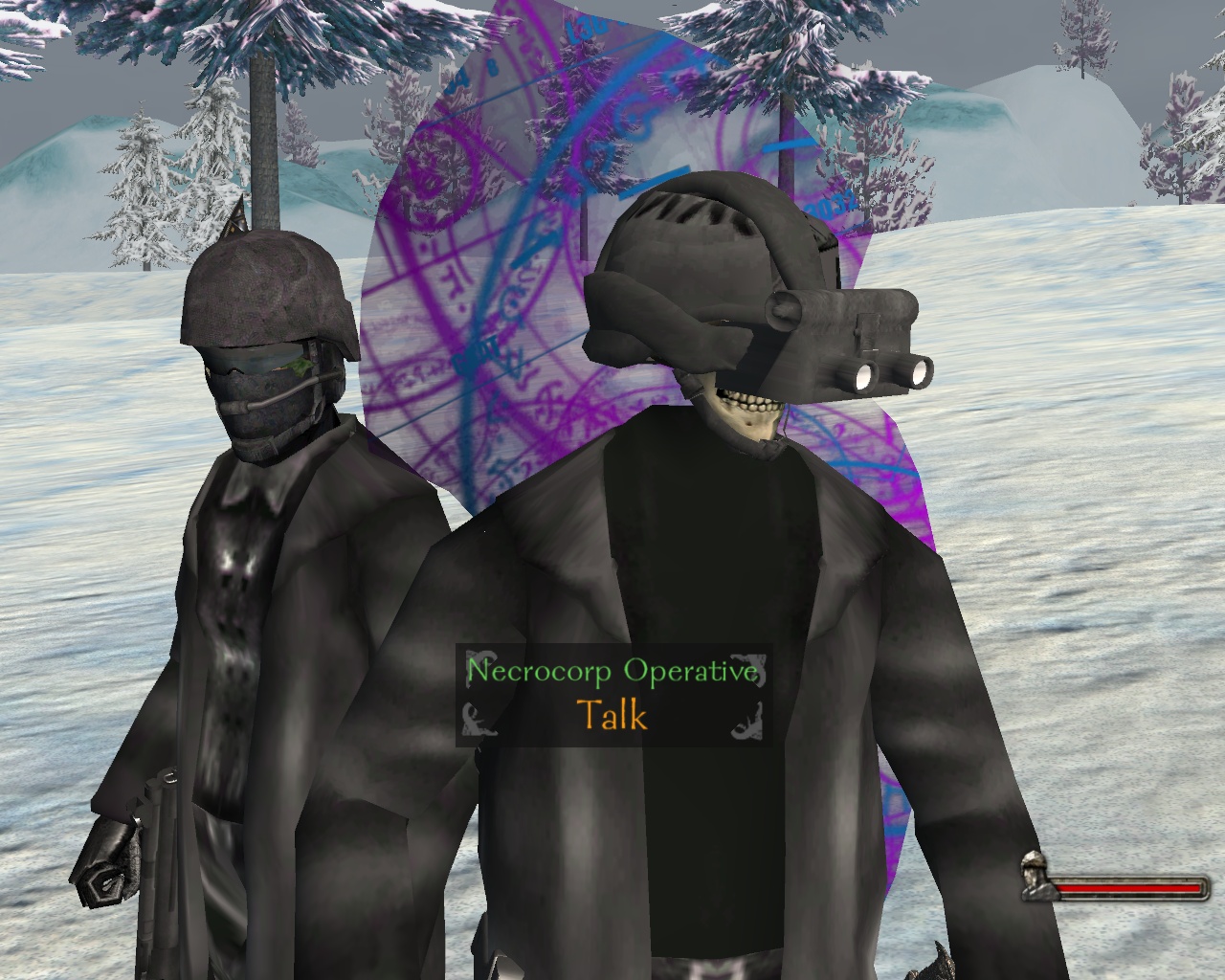 Diagrams were useless without factories which could produce them. So next step of corrupted Weimears was setting-up a Company, of manufactures. On paper this was economic company which target was to produce and conduct trade, especially with Alien Shimizq.

If corrupted Weimears wanted to start manufacturing high-tech items, it was obvious, that they need knowledge far up-to-date than their own. Ordinary trade company wouldn't be able to acquire needed knowledge in short time. Simultaneosly Weimear Company, at those time called "Northern Maunfactures" developed more secret division of industrial espionage. 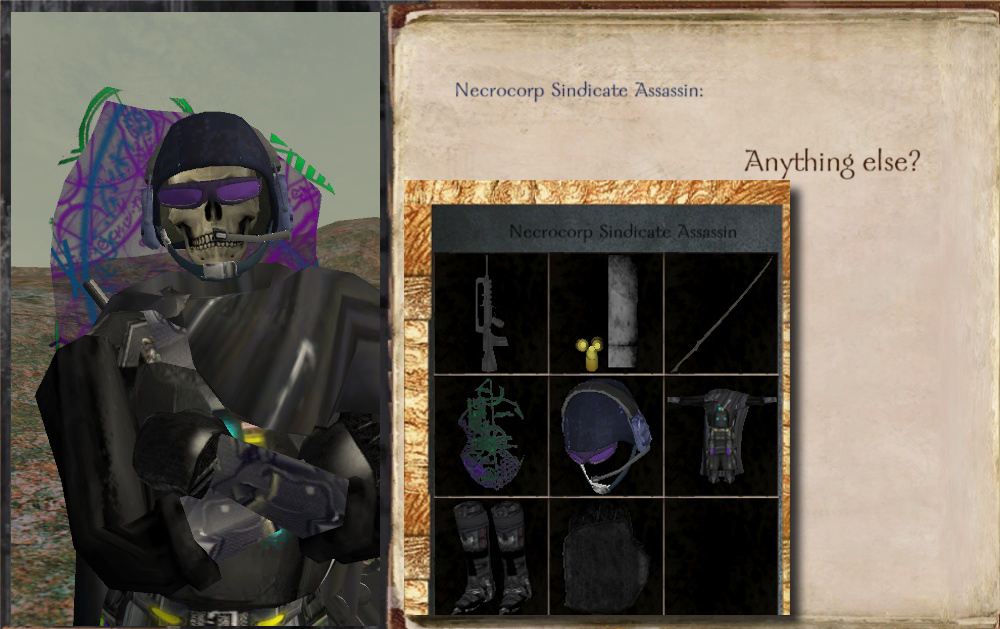 Even then years passed after Company was able to even start experiments on new weapons.

Someone could ask: how is it possible, that so long lasting actions weren't stopped by true Weimears? At those times Company provided great amounts of dinars to Weimear Reich. It was run by the nobles and quickly became state within a state. Simply put, it become to powerful, to be just shut down.

So, how Weimear Reich has fallen? Was it a war? Uprising? Years of revolt? 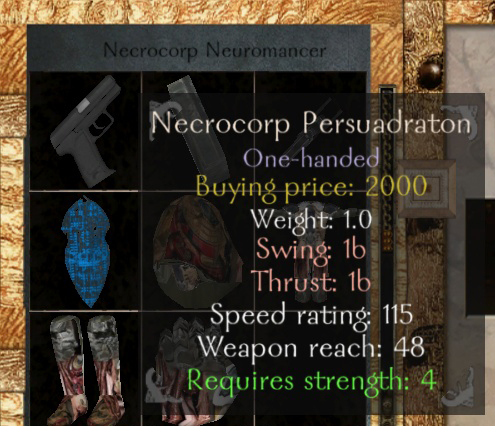 True Weimears become extinct. How? The secret is in most powerful, vicious, deceitful weapon ever created - Persuadraton. This item can make a puppet of every living creature. It works only for a short time, most powerful necros - corrupted Weimears - can overtake mind of a victim only for a few days.

Everyone hit by this item can be persuaded to do anything that "puppet-master" wants. 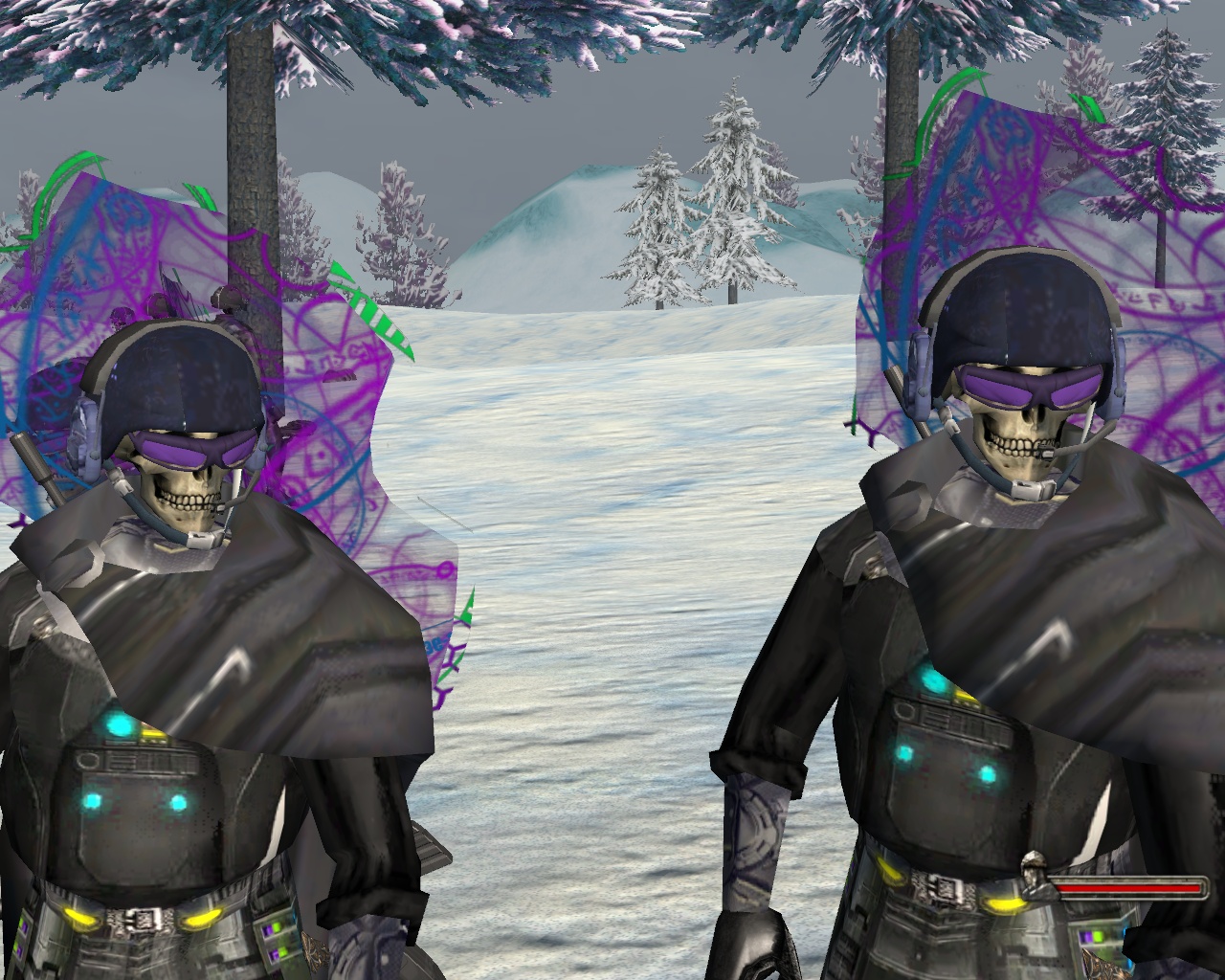 Most powerful people were persuaded to give away their belongings, wealth, political knowledge to the Company. Corruption, blackmail, espionage techniques - there were most common weapons of corrupted Weimears.

Not everyone has been persuaded to join or even like new order of things. But before rebels started to organize, company started a revolution. 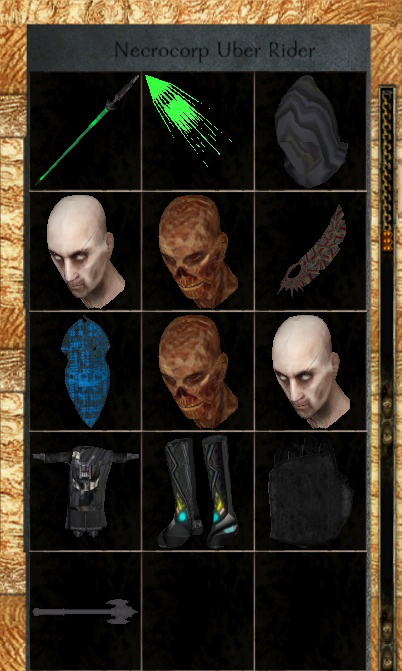 First of all, they managed to paralyze true Weimears kingdom by persuading XIV Reichsfuhrer of Weimear - Darlauf Herknagtin to banish some of his best generals. Few actions like that created serious crisis in administration.

Other lords were persuaded to revolt against their liege. This created only more chaos. From outside it looked like Company is only power that could handle such problems.

But then it turned out, that there is no more Company, there is Necrocorp. New system, new power. Even then true Weimears numerous true Weimears tried to oppose new force.

Then Necrocorp shown its true power. Not the heavy knights, powerful cavalry. Fight in the open field is a finality. However Necropcorp is able to handle significant enemy forces.

At lowest level - cannon fodder. If a weak creature would be persuaded to much, it would descend to mindless creature, a zombie. First wave of Necrocorp soldiers are turned to zombies true Weimears. 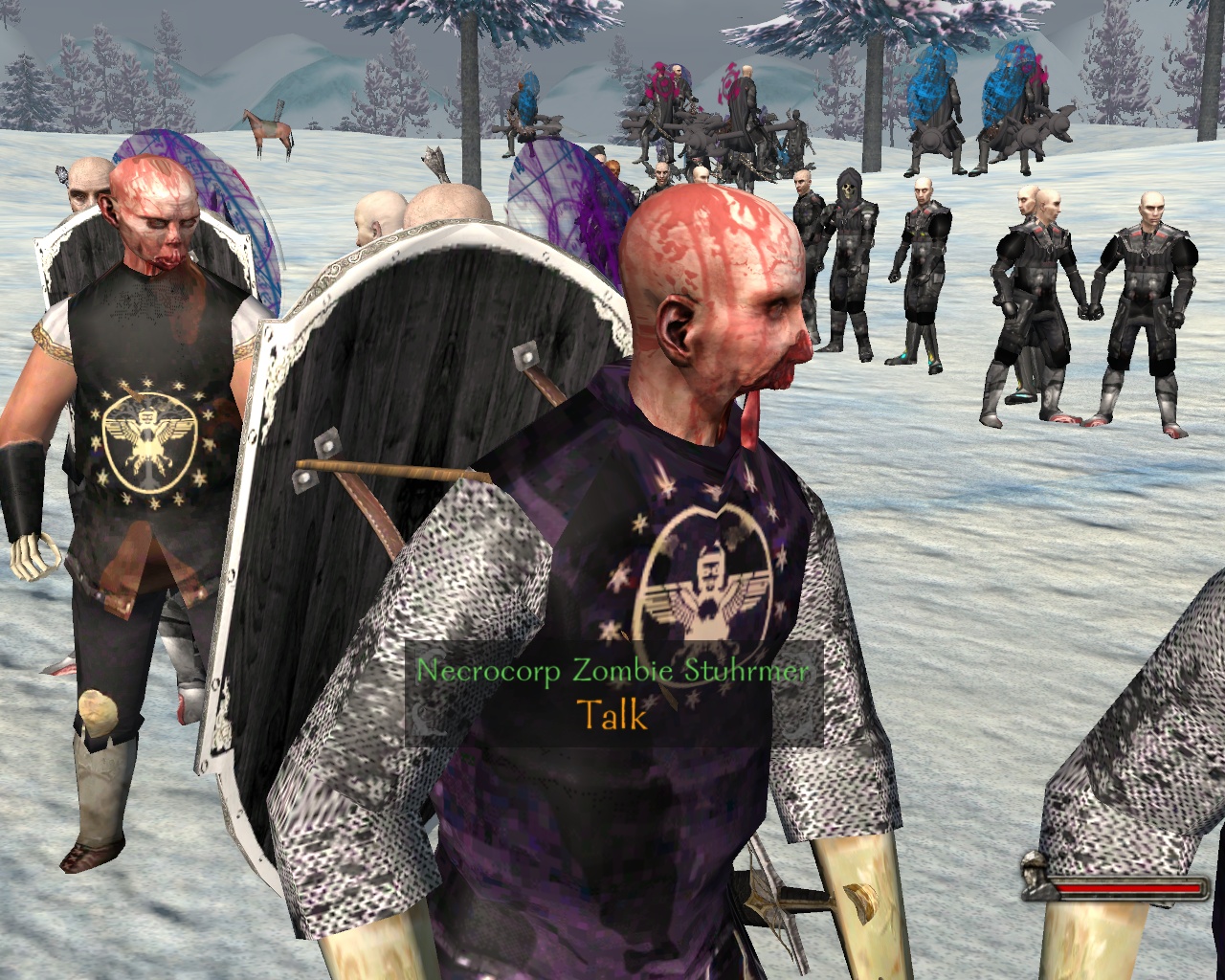 They are controlled by puppet masters - Hauptmanns, or higher level soldiers.

Ancient technology mixed with knowledge stolen from aliens emerged as one of the most powerful ranged weapon - energy lance. It is generally very complicated energy condenser, similar to lightsabre, but weaker. On the other hand it is able to throw condensed plasma. 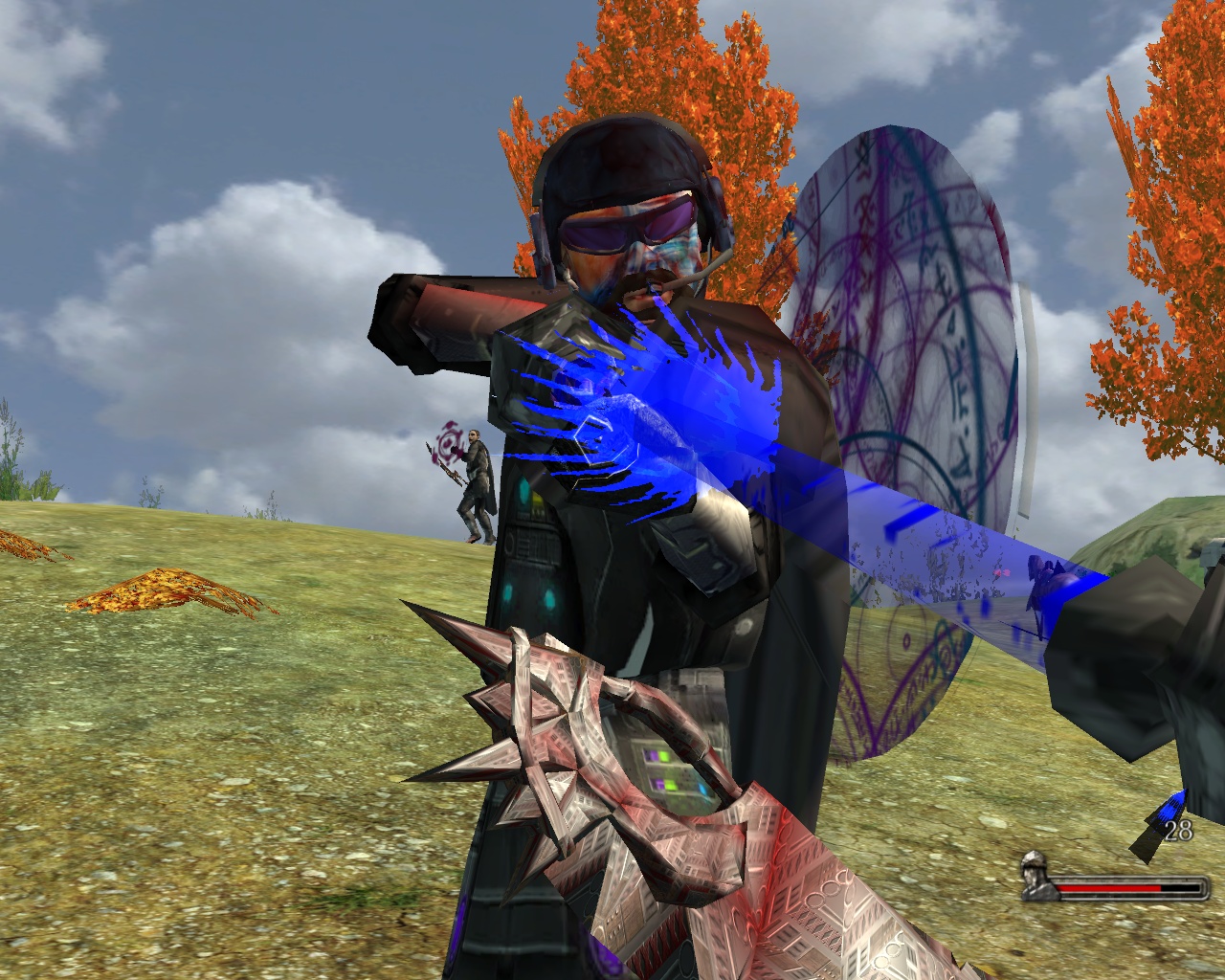 Necros developed their own 'cavalry' - raiders using machines - mix of magic and technology. 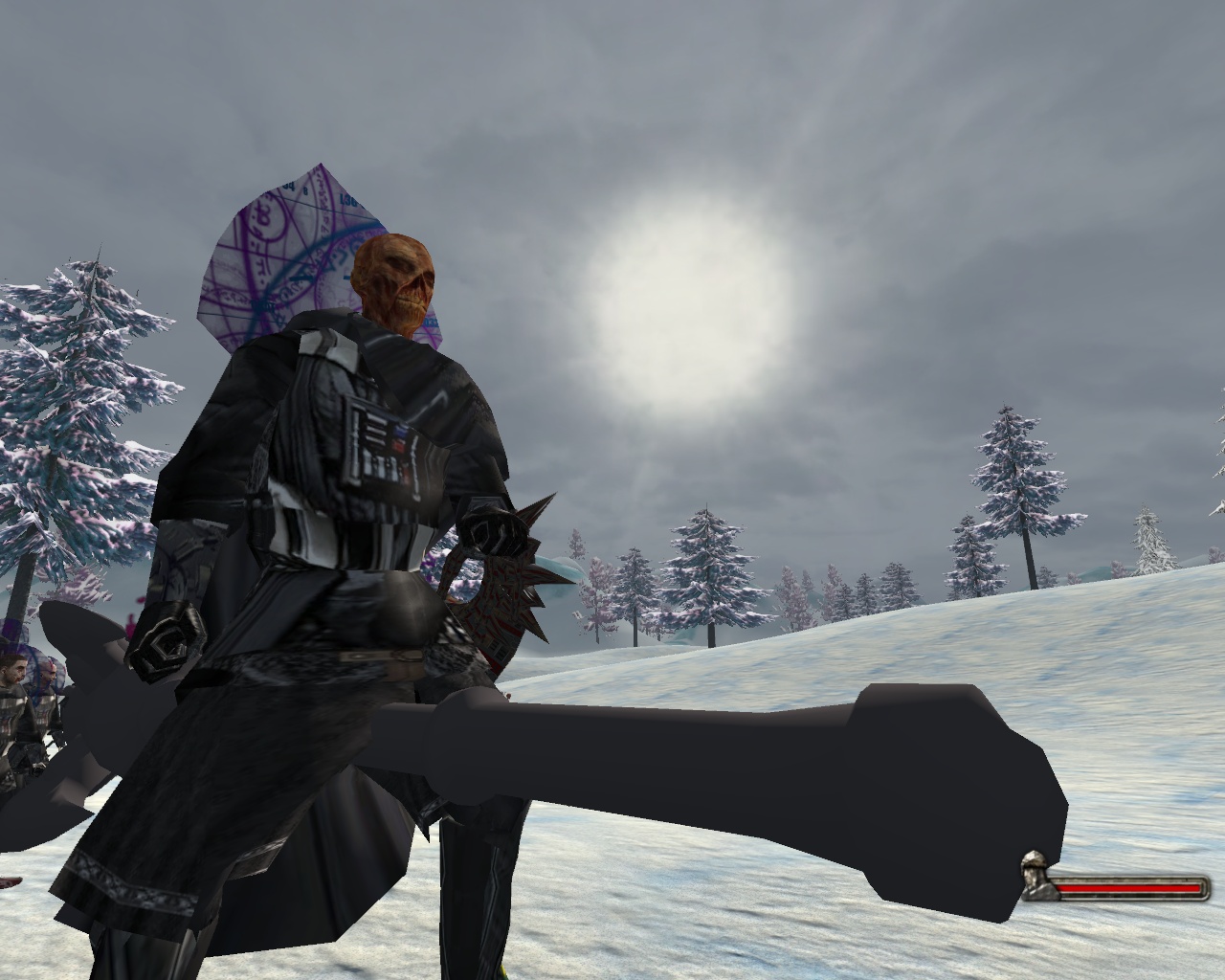 Last line of offence are best trained, genetically upgraded Necrocorp agents. They use most advanced weapons. But were energy, or bullets are not enough they can handle enemy by using hi-tech blades. 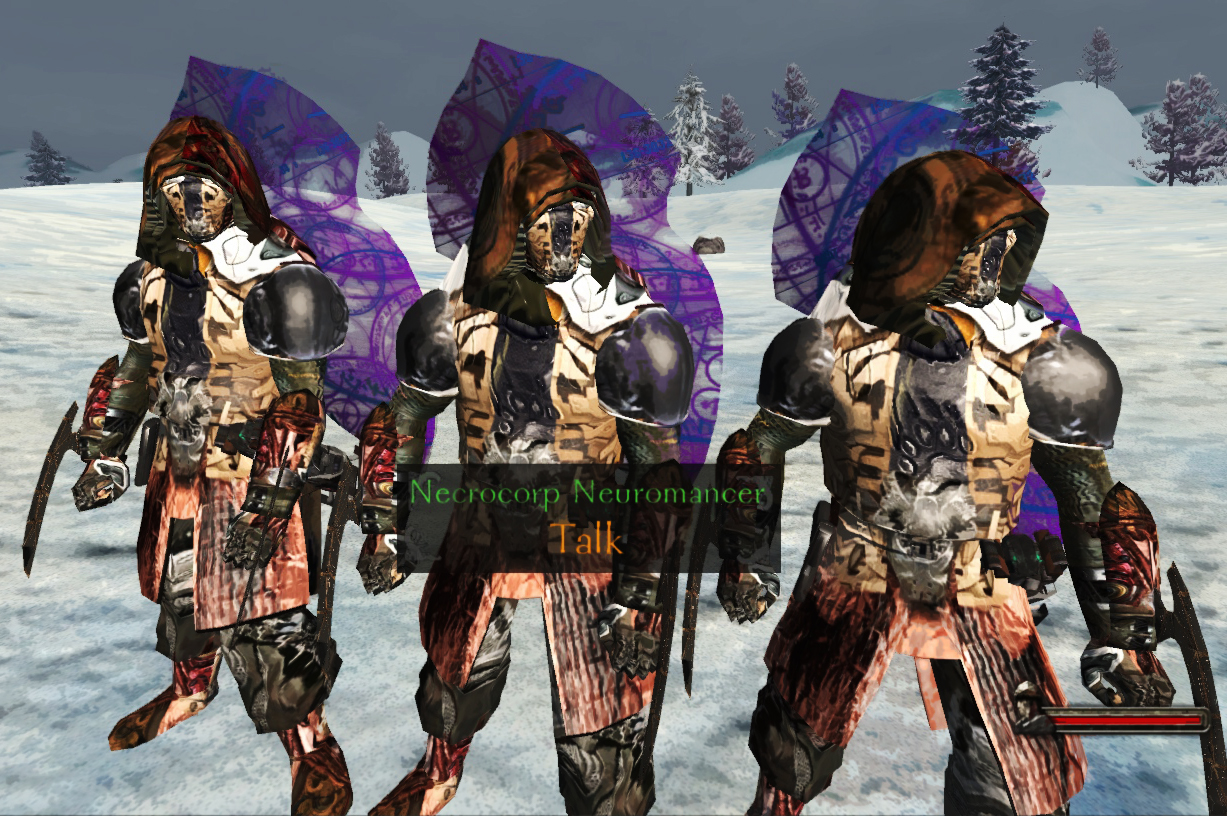 On the top of everything are Neuromancers. They use power of persuasion. They are able to turn - for a short while - lasting one battle - enemy into friend.

Necros are still minority, but most of true Weimears are mind-controlled puppets, mind slaves. 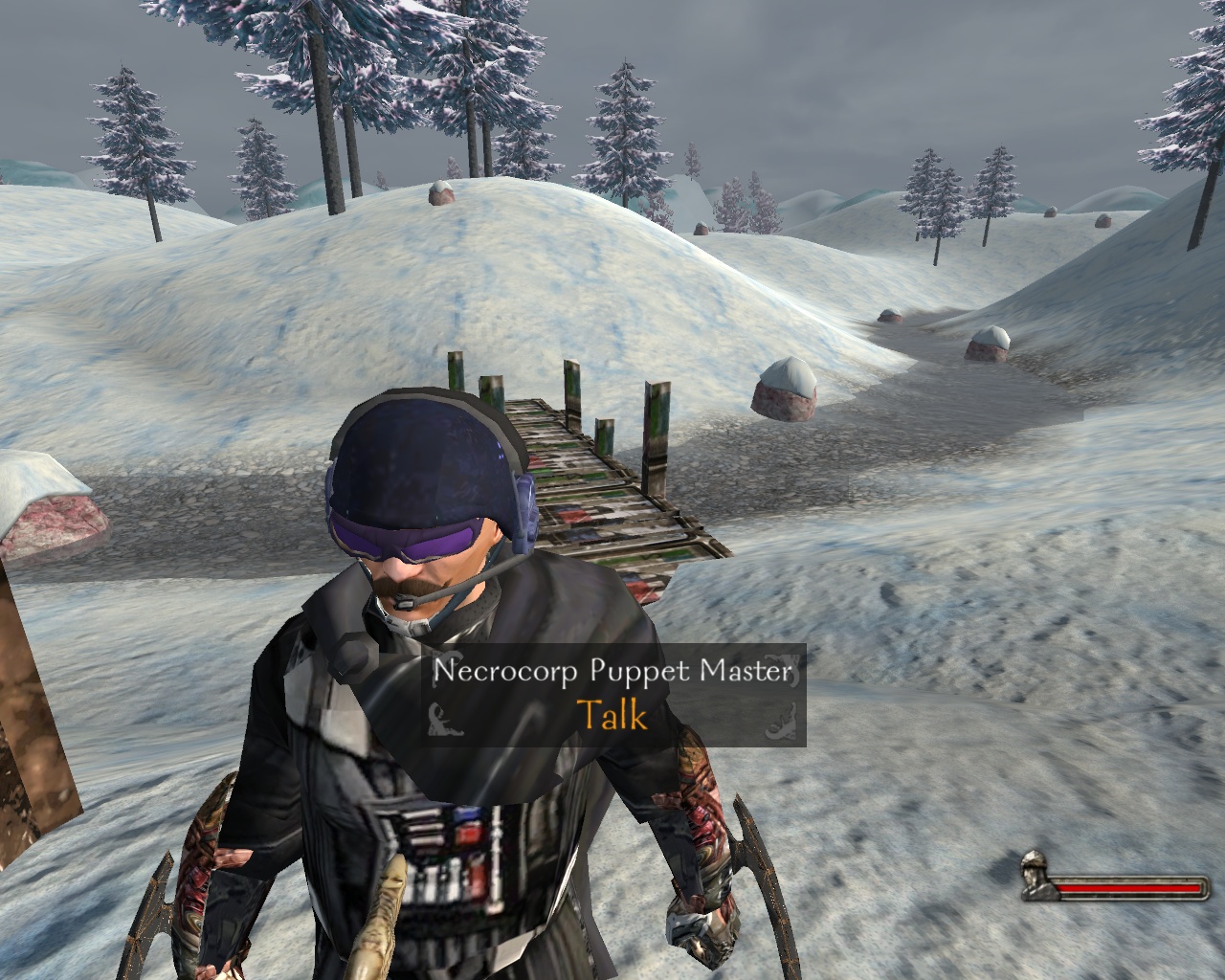 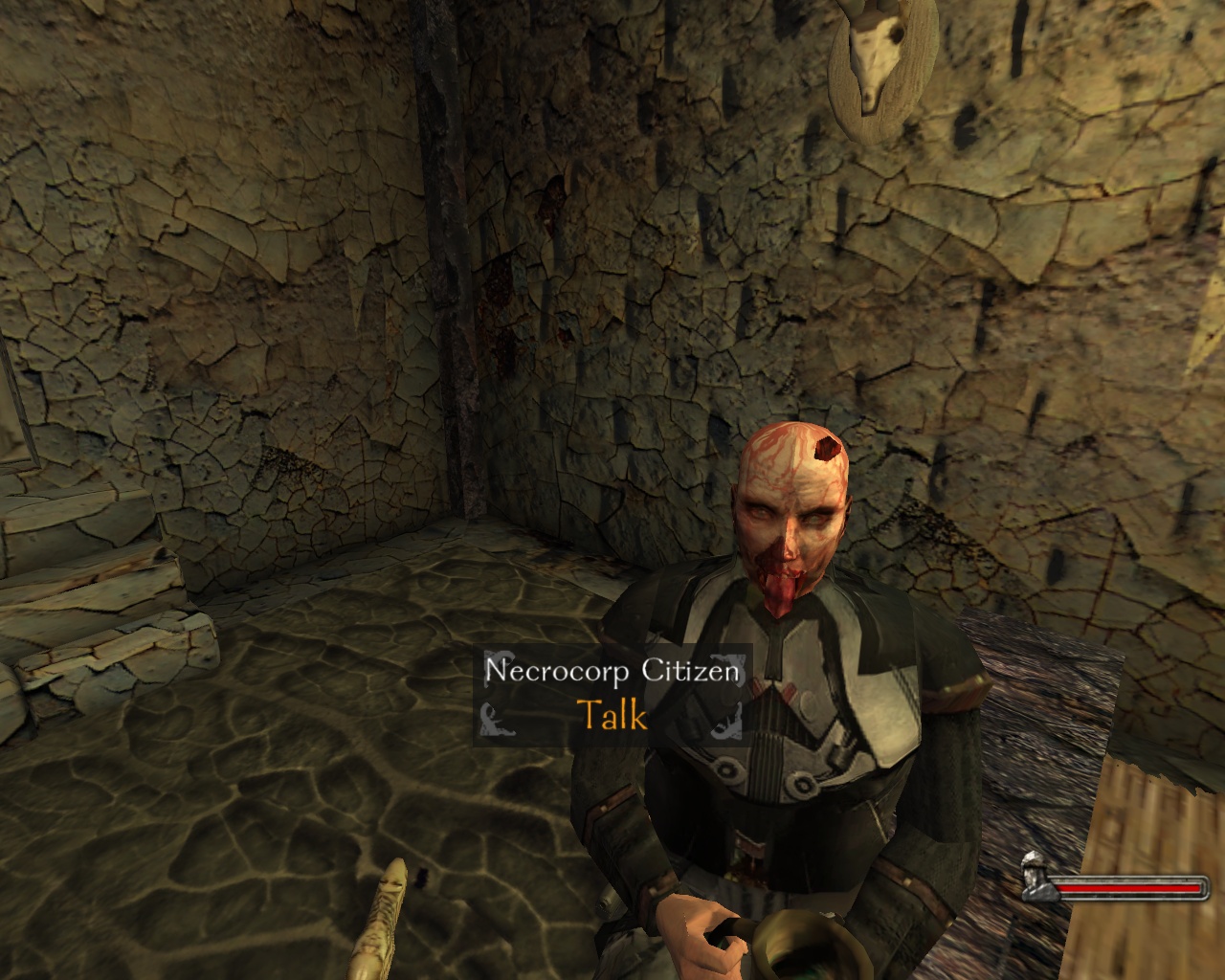 From this point of view Necrocorp - which from a simple company turned into giga Syndicate - can become most powerful faction of the Paradigm Worlds.

DON'T LISTEN TO THIS! THIS IS ALL REBELL PROPAGANDA! There are no so called 'undead' in Weimear!