This update looks to expand the activity in the south of the map by adding the undead pirates and expanding the lizardman faction to the east. There is also a considerable amount of balance and mechanic changes.

Main Southlands download, Patch 2 and quickfix is all you need.

There is a dedicated installation assistance thread on our discord which includes a guide on how to install. If you are having any problems please join our discord and follow the instructions in the first post.

Also we have an installation guide here:

This version includes all content of previous versions, including dungeons and freelancer

This release is Warsword Conquest: Southlands Edition and is a full complete download, please delete your old warsword folder and copy the new one into the modules folder.

A new version of Warsword Conquest has arrived with the focus on the Southlands and bringing as much action down south as you will find in the north. This version brings lots of new models by Crypticguy and Kraggrim and new music by Javi Robles to enhance your experience.

The Pirate Kingdom was destroyed by the Skaven years ago but now Luthor Harkon has resurrected them and has taken over the western part of the Lizardman Kingdom, while settling new locations further north from which to launch an immediate invasion of the Nippon Colonies. Their roster returns, but deader, and with the addition of bloated corpses and topped out with the extremely deadly depth guards. Zombie pirate ogres decimate their enemies from behind the lines. 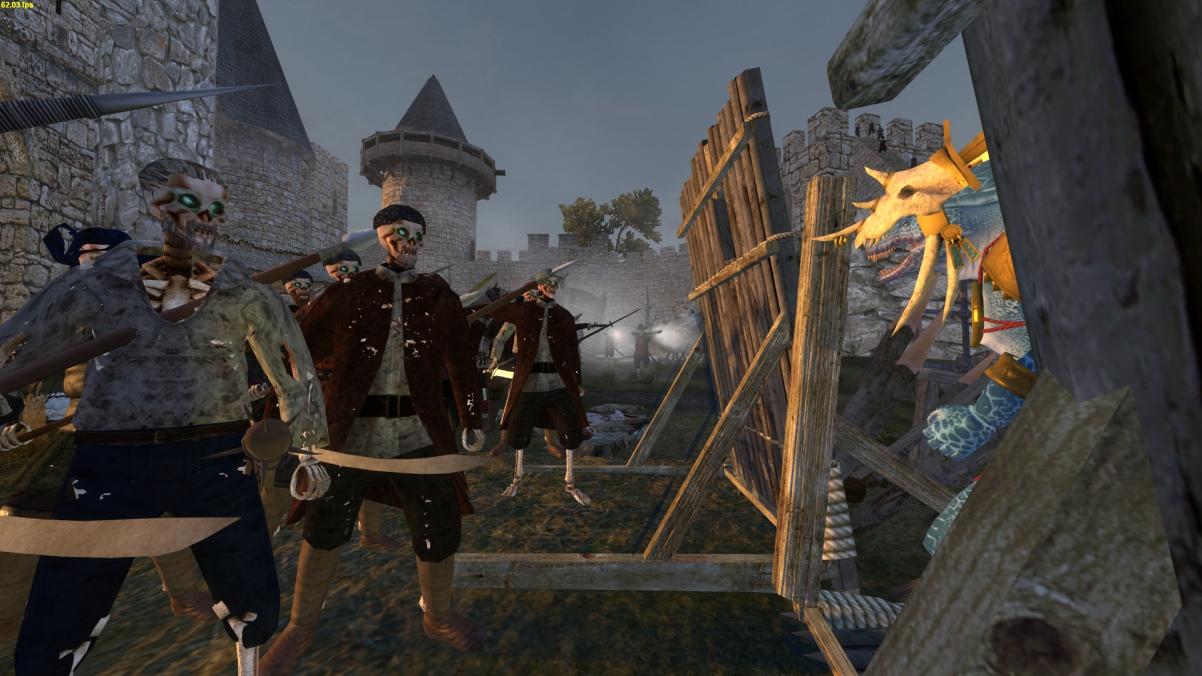 Cryptic guy has completely re

men faction from scratch. Remaking all models, armours, weapons and even creating new towns for them. Their territory has been expanded further east with 2 new towns and a few new castles.

Players will now be able to become skinks and learn magic in the lizardmen towns. If the player chooses to be a saurus they can access the 'Temple of Guardians' in any lizardmen town when they have 500 renown. 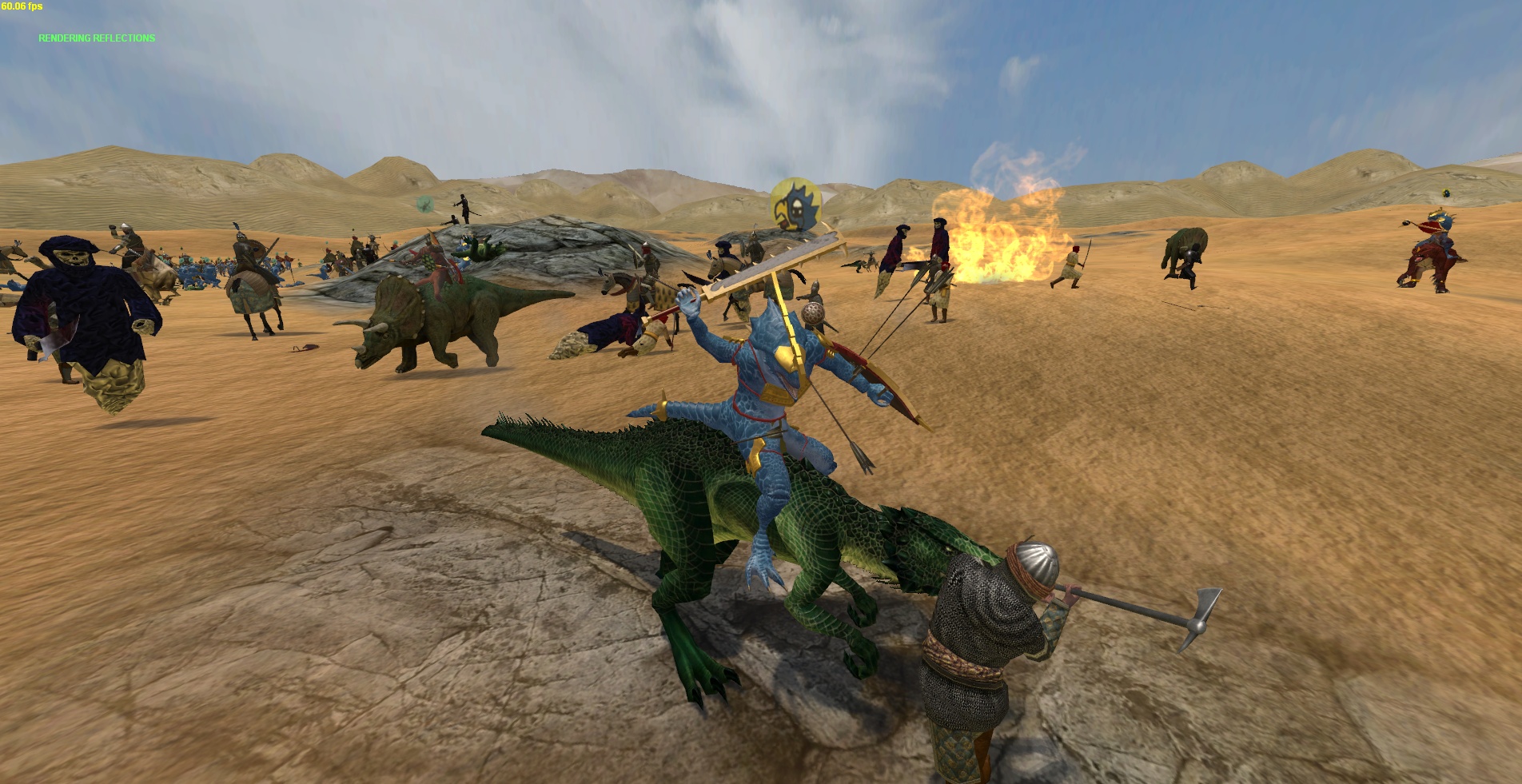 All 3 magic skills now go up to 15. AOE damage spells will now be as powerful at 15 as they where previously at 10. All other kinds of spells will be more powerful than before and have a bigger effect radius.

All 28 non generic companions now have 4 events which can happen at any time to develop their story, character or skills/abilities.

Check out the current soundtrack for the mod and portfolio for Javi here.. 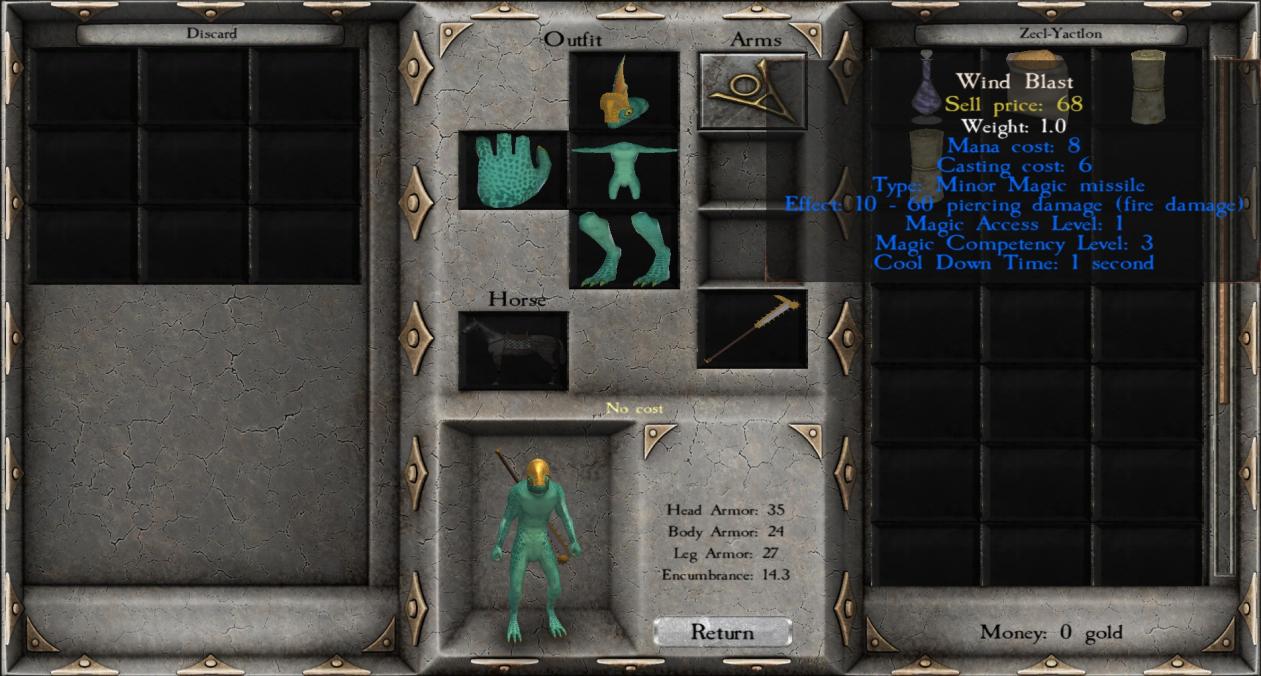 More than any other update before, we have been making significant balance changes, big and small, based on feedback from frequent players on our discord. These changes have particular focus on Empire, Chaos, Dwarves and all mounts.

We have divided poisonous into 'poisonous' and 'venomous' and they will work differently in battle. Poisonous will remain as it is now with performance debuffs which can last for days after being inflicted and a restriction on regaining health on the map.

Venomous attacks will drain health for 5 seconds after receiving the damage (amount drained reduced by constitution skill) and for the rest of the battle all healing effects are only 20% effective and mana generation is greatly reduced. These effects do not continue beyond the battle.

Horned ones are now faster than cold ones.
Magic resistance cost increased.
Dwarves have one handed axes and hammers lengthened
Music track added for last dungeon room
New music for battles and dwarven lands
New weapons for orc boar riders
Fixed issue where runic weapons would not work for dwarf companions
Fixed runic blunderbus
Cost of ships increased
Desert lore fixed and new aoe added.
Mounts rebalanced.
Fixed curse of the horned one spell in plague
Ice guard added to Kislev as retinue troop
Money lost in random events has been capped
Good and economy rebalance for some of the factions

Kislev weaponsmith fixed
Bears made to the right scale
Bolts added to tomb kings
Araby horsemasters given their bows in battle.
Tweaks to VC shield quality among troops and shields added to weaponsmith.
Slight increase to orc archer power draw
Summoned weapons now remain until unequipped
Fire particles should now disappear from flamed weapons when unequipped.
Fixed boon of tzeentch cancellation script
It is now 'z' to brace a spear
Celestial mages now ignore lightning storm event
Fixed an issue where poisoned globes would still poison those who should be immune
Invocation of Nehek increased in mana cost and cooldown time.
Fixed Kislev character creation stats
Split poisonous into venomous and poisonous.
Curing potion will now make you immune to venom and poison for a period of time after drinking (based on constitution)
Due to skink conflict (and that they wear no metal) plague of rust and arcane unforging will not work on goblins and skinks
Ice magic lore attribute now regenerates in battle in snowy terrain as well as the map.
Made changes which should help solve resiege civil war bug

New vampire faces by Kraggrim
Dungeon room fix by Kraggrim
Blunderbus and shotgun range reduced
Mighty blow, damage runes and special weapon effects and some magic effects will now work against mounts
Life, vampire and Qhash lore attributes will only work if an appropriate troop was affected
Qhasyh lore attribute will now stack with any ward save you have up to maximum of 2+
Fixed issue where burning head thinks it failed when it hits
New potion ui (where you place them in inventory now no longer matters)
Magic and potions should now work on the streets scene of sieges
Amber, Jade, desert, vampire, qhaysh, gold, grey, light and orc schools have staffs added
Fixed an issue where you could not remove dungeon companions if you have more than one disabled
Magic users in dungeons restricted
More loot in end chest with main item. Increased difficulty means more items.

Bank associate added so players can access treasury anywhere and also set up one before becoming a lord/king
Many companions stats changed
High persuasion will now reduce the rtr, renown, relation and reputation requirements for lords of your race/faction joining your kingdom

Your riding skill now needs to be 2 levels above your mounts riding difficulty to qualify for guaranteed casting.

Credits for this release

Crypticguy: Many new models including lizardmen and chaos and lizardmen town scene

We hope you enjoy the new version of the mod.

Download will most likely be uploaded this time tomorrow.

Take a look at the responses in these comment sections. (请看看这些评论区的回复)

YEAH update for my fav mod for Warband, thanks guys!

There is a problem with the banners of the fassals:some vassals do not have their own banners,but others'.

This is a long-standing innovation to complicate the game, you will have to sweat(I played for the pirate brotherhood when it was not sunk yet,only one captain supported me,but I never received a new fief, even when I personally captured the castle playing for a dwarf, I received news"Thank you, but no").Drop this business-become a king,it is more profitable and more interesting and you do not need to perform stuffy tasks(scout,bring it to eat).

Although it's very fun, there are still some bugs that affect the experience. 1. Many caravans are stuck in the sea and can't enter the town. 2. Hold down the big map and the time will pass quickly, and the game fluency will be seriously reduced. 3. When you rest in your city, you will not participate in the battle. 4. The mouse arrow often flashes in the army companion interface. 5. Even if only one person in the investigation team dares to attack the player

1. Items stored in the castle are lost

2. There is a probability that weapons will be lost in the arena

I create my character,cool elf...enter in the tavern as soon i recruted a companion 'Ishi" her name i think...the game just freeze for ever,and yeah i install it on the right order but i will download all again and try again i will look the discord despite i hate it too much visual polution this social media is chaos.