This is a news and info for what is planned for the next version of this mod, sorry no release date yet.

Start on map straight away no start fight or mission.
Sell prisoners to tavernkeeper.
Join any battle.
Death cam and battle continues.
Hire mid level faction troops from castles after joining a faction.
Villages now produce recruits of owner faction, after taken over by a faction they produce new owners recruits.
Ability to change player kingdom troops to any faction troops.
New Defecting code by TheMageLord, stops lords defecting or being kicked out of their faction but player can still talk them round to joining a player kingdom.
New Gender code by TheMageLord, all gender issues are now fixed.
New Item Race Restrictions code by TheMageLord, Now players can only wear items which relate to the race they are.
Sea travel and battles.
Freelancer mod.
Faction patrols.
The player has the chance to obtain magical weapons and armour for themselves.
Revamped tournaments with special tournament characters and teams. including keep your own armour.
New map.
New Npcs.
Trade Goods mod.
More new coding and bug fixes will be added before next release.

New Map
I have decided to change the world map for the next version here is a very early WIP screenshot but it does show you all what areas of the warhammer world you will be playing on. 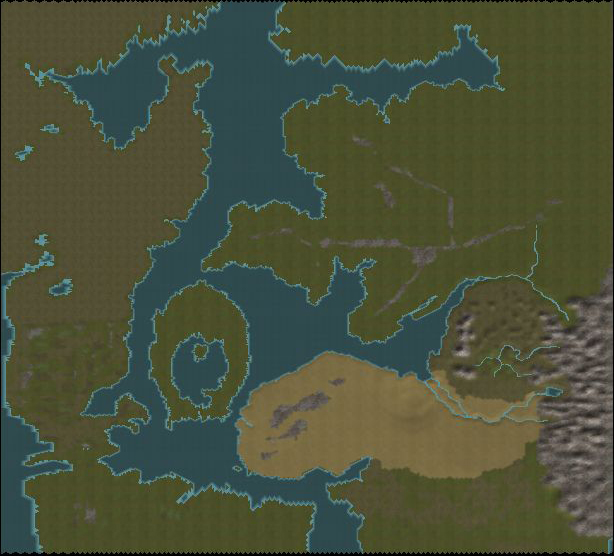 The mod module has been restarted from back to basics so hopefully most of the little bugs have been fixed, also remember some of the bugs you have now maybe down to the old version being for warbands 1.143 the next will be for 1.153.

Nice, good features and glad we have all the main factions.

wow fcking awesome. I still pplay warsword every now and then. The old old version. After this next update I'll switch to the warband version for good.

I don't any see news for the Ogres Tribes; are you going to make some changes ? I'm thinking of the Ogres mercenaries and I think they could be more powerful, because for now it's not worth the expenditure.

Not sure about Ogre tribes they maybe to powerful for a full faction of them but I will look into either making their stats better or lowering the cost of them.

Sweet ! Thanks for replying ;)

This is going to be awesom

looking forward to the next version!Nice work ;) !

Can't wait man. Hey, do you guys have a tenative release date?

Sweet mother of god... This shall be awesome.

Thank you all for your nice words and interest in the mod, at least some people like the work I do.
As for a tenative release date maybe sometime first half of next year (2013)

Your mod is way too awsome for our words! :D

A few questions, how much of the worlds edge mountains can we visit if any? (karaz-a-karak would be a dream come true) also will the new version have proper dwarven beards, body shapes/sizes and more fitting clothes (the southland dwarves in the last version looked silly with short beards, kilts, and funny hats) and also will cities look how more how they should when you visit them? Just curious is all, really looking forward to this none the less.

Karaz-a-karak will be on the new map and I am redoing the Dwarf faction at the moment for them to look more like old world dwarves, screenshots will be posted very soon.

I will try and make the Cities to look more warhammer if I get the time, but troops and factions set up come first.

Can you add the dipomacyand conquest stuff like being able to hire a recuiter and chancellor for your kingdom? and make it crash less

its great, looking forward to this!

great mod chief, luv u can have ninja and pirate army, big fan of old skool warhammer, luv 2 c the old ones aka slann, giants2, mabe treefolk, halflings, chaos dwarfs, cannons and the orange hobgoblin horde :) if u havnt seen the mod 4 totalwar, call of warhammer, its got some great unit models, luv the big map idea, bring on the whole old world

Kind of upsetting that the Vampire Counts are not in there, guess i'll have to settle with the Tomb Kings until then.

Love it cannot wait to see the finished version- hopefully with more options and what not.