Notes about the Thedas Kings 0.2b The Lords of Thedas Patch 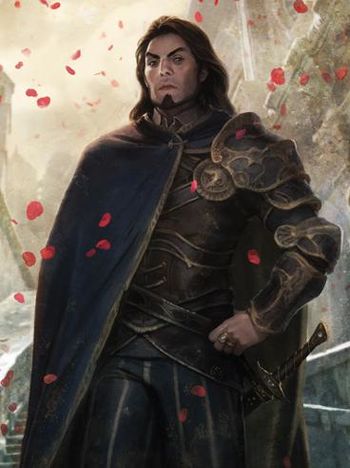 What the patch has to offer?

Summary of Borders for later patches in later Eras

In most Part unique province names and flags altough may be lacking in certain areas where is little information about.

And Republics and Freemarcher states

Whats still in Progress / what is not finished?

#MULTIPLAYER WORK IS NOT GUARANTEED#

And please if you find any bugs or have any suggestions do us know, although i know of most of bugs in this patch already

This is Amazing!! yaay :D

Sounds good to me ;p

Are you guys going to add in Exalted Marches?

Exalted Marches are basically Chantry Crusades. For example, the Elven Kingdom/Empire of the Dales was destroyed by an Exalted March when they refused to worship the Maker.

An Exalted March is basically when The Chantry calls the equivalent of a 'Crusade' on a nation which they believe is unholy.

OK Hope this is the right article to post this in. I have a HUGE list of ideas here;

Drop down all but Tevinter and Orlais to Kingdom-level titles. I understand the logic behind making each nation an empire-level but at this point we know so little about the various Thedasian countries, aside from Fereldan, Orlais and (somewhat) Tevinter that it doesn't seam justified right now.

Remove all Viscounties but Kirkwall and Kaiten.

For the Calander, would either use the Established Chantry one or the Tevinter one. Using the Elven one (which is still of in game, the year should be 8429, not 8931) simply over-complicates things as most fans wouldn't know what year that's supposed to be under the wide-spread calander. Plus the Elven calander is very much a legendary one and not easily datable. Would personally go with a version of the Chantry calander (might start in the second century, ie what would be 100 AD, to better match up); for "historical" characters, like the Early Archons or Dwarven Kings, do what Lux Invitus did and have them born on 1.1.1 and die 40.1.1, just keep moving them up a day for bloodlines. Unless your planing on eventually having a playble scenario for the First Blight and earlier, then the Teventer Calendar would make more sense.

While the Imperium is obviously based on Byzantium, the Lore suggests that the Merchant Republic mechanics would work as a better basis than the various Imperial system mods.

Would remove all noble titles exept for Lord/Lady (like the AGOT mod) and Magister as per canon. Could use Byzantine-style titles in the absence of canon titles, but would recommend against it for now. Not sure how to make the Magister title awardable and hereditary though; perhaps titular duchies that can be given to county level families? Would make the de-jure ducal titles and above into Viceroyalties (could use the Roman Praetorian Prefect and Vicarius or the Byzantine Katepano and Strategos as the titles for King and Duke). This better simulates the centralized bureaucratic state that the Imperium seems to be.

Would make two hereditary traits for the Altus and Laetan families (based off the sayyid and mizra traits).

Better Archon succession mechanics. Basically a modified version of the Merchant Republic mechanics. Let the Archon designate an apprentice (BTW some kind of apprentice system would work well for the Circles and Tevinter Mages) as heir and adopt him (Not sure if Tevinter has ever had a female Archon or not; now female Archon has yet to be mentioned in lore); when that heir succeeds he has the option to retain his adopted dynasty or return to his original family. Think similar to the event in the AGOT mod that lets an inheriting noble retain the original family name if the inheritor is of a different family.

Have seen this before in other Mods; have the council expanded to around 30 members (and remove voting rights for the Chancellor, Marshal, Steward,Court Chaplain and Spymaster) to simulate the Magisterium (could make the Advisor title Senator, as members of the Legitature are called Senators and Magisters and would smooth the issue of creating a hereditary council).
Combine the High Reaches and Val Dorm into a Kingdom of Tevinter and add Vyrantium to Neromenian. Add Arlathan Forest and Hundred Pillars to Tevinter de-jure and de-facto. Could make the southern Kingdom into Barindur.

Just an idea and not sure if the mechanics are there for it to work. Have the Government a combination of Merchant republic and Imperial. Have say 10 to 15 merchant families but remove the ability to build/hold outposts (similar to the family Palace mod). Each family's title is Magister and elects the Archon, not unlike Merchant Republics. Could allow for more families to be raised to "Magister" level if possible.

The Antivan Monarchy should be very weak and have few vassals. Make two Merchant leagues to represent the powerful Merchant Princes (a Northern and Southern League?) with most of the counts sworn to them. Also need something to represent the Antivan Crows, perhaps a Duchy or a secret society perhaps?

Make the Rivaini Royal family Andrasian along with the capital province of Dairsmuid. The rest to the country should be a mixture of Qun and Natural Order/Pantheists, a native religion worshiping spirits and nature, as the Chantry is very week in this country.

Create large Pentaghast and Van Markham dynasties controlling much of the country between them and the Order of Mortalitasi with land holdings (could be a society in which case just control the grand necropolis). Make Pentaghast CoA a dragon/a dragon being slayed or two dragons in the background and the Nevarran skull in the center.

Add the Planascene forest to Kirkwall and the Hercin forest to the Free Marches.

Make most Marcher states into Merchant republics. We don't know much about the succession practices of the various marcher states but their customs seem to be opposed to hereditary states, with exceptions for Starkhaven and Wycome.

Make Grand Duke and Grand Duchess minor titles grantable to siblings/nieces and nephews only. It will override Prince/Princess as a title.

Incorporate the Dales, the Arbor wilds and the Western Approach as de-jure Kingdoms in Orlais.

All Orlesian characters have masks (like the Asshari in AGOT mod).

Noble levels known to canon: Duke/Duchess, Marquis/Marquise, Comte/Comtesse and Baron/Baroness. Visomte/Vicomtesse is mentioned in Inquisition but unknown if truly canon or a mistake on writers part. Would ignore until fully confirmed or treat as a foreign title.

The Freeholders should be barons and the Banns Counts; for the Arlings, either have half without vassal Banns as Counts (West Hills and Edgehall) and the others with vassals as Dukes (Amaranthine, South Reach, and Redcliffe; Denerim could be a Barony-castle with a titular Duchy, as it wouldn't make sense for the Royal House to not control it's capital province) or have them all be Dukes with lower dignity; the Teyrnirs should be Dukes.

Can't seem to find direct examples of Teyrns who have vassal Arlings, with the possible exception of Highever and Amaranthine, so it might be best to have them both be Duchies, though the Teyrns would have a higher dignity.

A combination of the Catholic and Orthodox Churches. The Grand Clerics double as electors, so a modified papal succession is necessary; make a cardinal title that can only be held by certain baronies titles that would be Grand Clerics, not unlike the Patriarchates of Orthodoxy. If possible give them "territory" (ie Patiarch of Antioch covers Syria, so Grand Cleric in Denerim covers Ferelden) like the Pentarchy or the Autocephalous Patriarchs (would block/disable Autocephaly though, as the Andrastian countries don't seem to have the power to appoint and depose the head of their "national" church).

Something like 12 Grand Clerics (Three for Orlais, two each Free Marches, Nevarra and Antiva, one each for Fereldan, Anderfels and Rivain) for the College of Clerics should be good. Unfortunately there's no official number for the Grand Clerics, (bar possibly watching Dawn of the Seeker and trying to count the Clerics present) so it's a rough guesstimate.

Is easy to say but from which already made mods you can get the files to make the whole thing?

hmmm didn't notice this list, lets see the moddb isn't exactly kind when it comes to new comments for notifying

So well you do pride yourself with your tenacity to make suggestions and i appreciaty, there are quite a few things you mentioned that are allready in or simply have restrictions in base game and some things that are simply achieved with the empire tier main nation, (to have the teyrns and arlings in simple Order), now the Distinction with Empire and Kingdom the mod truly has is the ingame icon for empires being distinguishable compared to kingdom tier (they should be correct at the current patch though) but the ideas about the Tevinter will be probably be put to use later along with some of the land distribution suggestions of yours, thank you.

Cool, Glad I could help. I don't totally agree with Ferelden but understand the reasons. What about my suggestions for the other countries (besides Tevinter)?