Some hold that the greatest glories of Khazad-dum are in the past. Perhaps it is time to prove that the Dwarves are strong, even without the aid of the Elves or the service of Men - to seek out mansions in the mountains of the north, to take back Gundabad, ancient hall of the eldest of the Fathers of the Dwarves.Such an enterprise will come at great cost, and with the wars in the world outside, only one way is left for a Dwarf-lord who will arm his people and supply his hosts.Delve deep.

The hammers ring in the mighty forges of Khazad-dum, where Durin, sixth of his name, is king.
Deep they delve, the folk of Durin. For many years has the West-gate been shut, and the Great Gates open mainly for traffic from their kin far to the northeast. The world beyond the walls was plunged into the dark of Sauron’s rule, but for centuries the Dwarves have filled their great city with the light of mithril - ever rarer, ever more precious.
Some hold that the greatest glories of Khazad-dum are in the past. Perhaps it is time to prove that the Dwarves are strong, even without the aid of the Elves or the service of Men - to seek out mansions in the mountains of the north, to take back Gundabad, ancient hall of the eldest of the Fathers of the Dwarves.
Such an enterprise will come at great cost, and with the wars in the world outside, only one way is left for a Dwarf-lord who will arm his people and supply his hosts.
Delve deep. 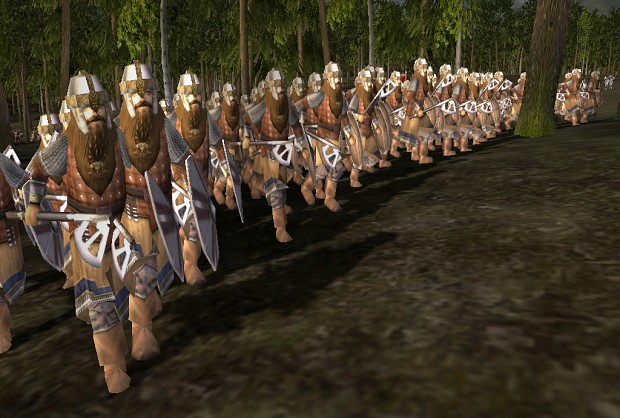 Stone-hard both in battle and on the march, the Dwarven Axes are the mainstay of a Dwarven army. Like the axes they carry, these warriors are tough, warlike, and strong - reliable to the last on a battlefield. With a shield in the off hand and a hauberk of strong mail, these are excellent soldiers of the line for both attack and defence. The cry of 'Khazâd ai-mênu!' - 'the Dwarves are upon you!' – is feared across Middle-earth thanks to the devastation caused by these warriors. Raised underground like all Dwarves, they learnt the skill of mining early, making them of excellent use in siege warfare where they can undermine an enemy's walls. 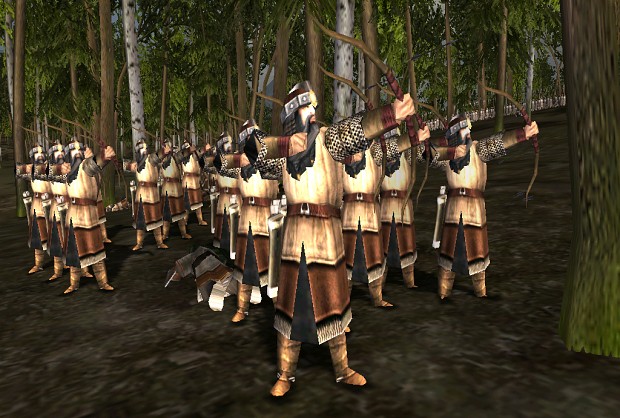 RANGE: Dwarves, though skilled in weapon-making, care little for bows when compared to their melee and siege weapons. But they do grasp the value of a bow's superior range. Training for the bow is often neglected by the Dwarves and only a few can claim to genuinely love the weapon as many love their axes, but strength and training can have their benefits, and these archers will stand up to many lower classes of bowmen. In melee, these Dwarves will overpower other archers and, thanks to their toughness, may even hold their own against some dedicated infantry, despite their lack of heavy armour. 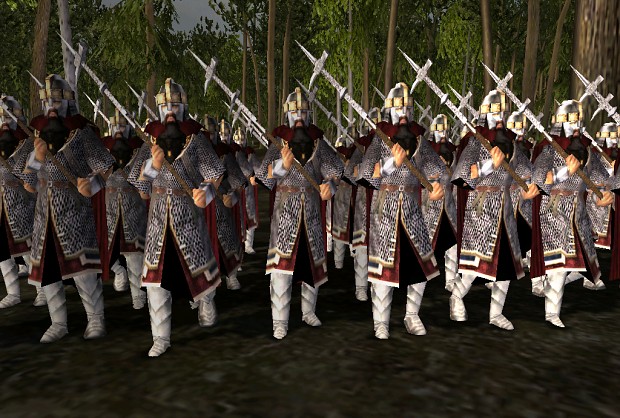 Few weapons can displace the special affection of the Dwarves for the powerful axe, but many commanders have begun to recognise the value of the long-hafted warhammer. These fearsome weapons consist of a heavy hammer crowned by points of Dwarven steel on the top and back, producing a tool equally capable of battering and piercing. Despite their ungainly appearance, these thrice-forged weapons have broken many soldiers and won many battles for the Dwarves. Lacking a shield but clad head to toe in strong mail, the versatility of the hammer leaves this unit equally capable of defence and attack. They are warriors to be admired – preferably from a distance. 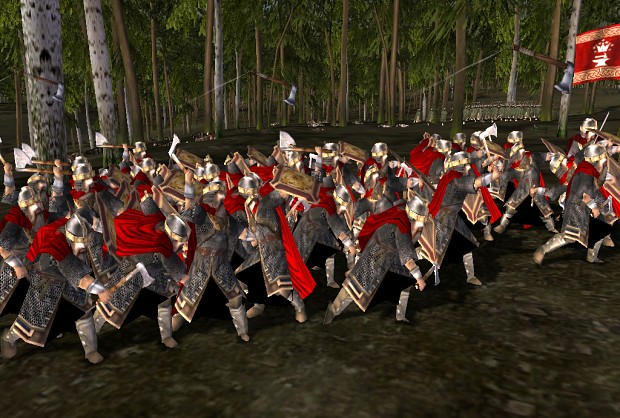 Throwing an axe is not easy to learn, but these Dwarves are both skilled and experienced in the art of war. Carrying two (comparatively) light axes, they can disrupt an enemy's rank before charging. Indeed, belying their stature, a Dwarf can roll along at quite a pace and deliver a powerful charge. In Dwarven lands east of the Ered Luin, the throwing axe has proven a most useful weapon in wars waged within the confines of tunnels and caves. Over long years of combat against the hated Orcs, the Axethrowers have become somewhat specialist Troll-hunters: the flurry of axes followed by a sudden charge confounds the beasts. 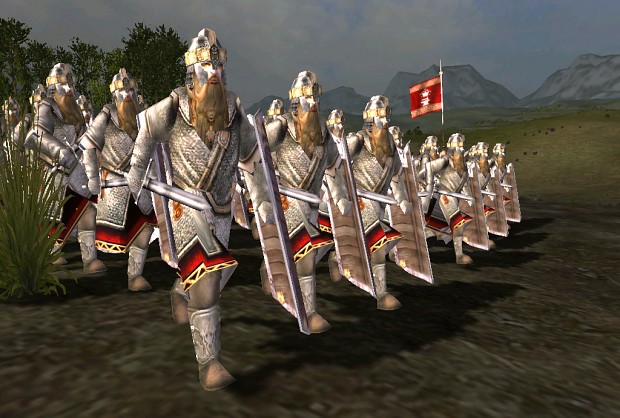 Countless ranks of Orcs have been broken on the shields of these Dwarves. Armed with a sword for fighting in the tight quarters of mines and tunnels, the Shieldbreakers train as a compact and defensive unit, acting as a solid wall on the battlefield. They don the tried and tested war apparel of mail and a steel cap, and are a fearsome force in war, trusted to defend a key position against all but the most determined of attackers. Like all Dwarves, the Shieldbreakers are hardy and fierce under pressure, and will not lightly leave a battlefield. 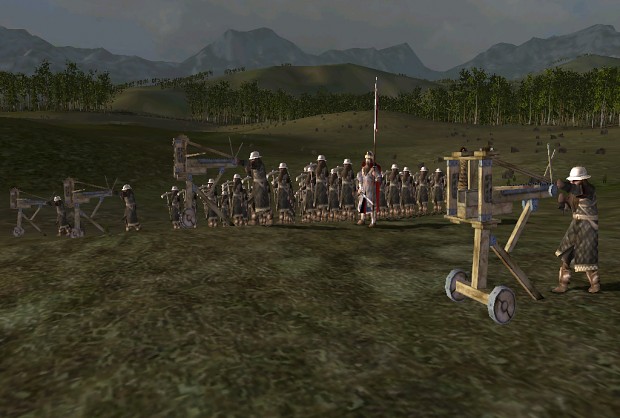 Smaller in scale but no less mighty than the ballistas built by engineers of the Dúnedanic realms, the Dwarven Ballistas can deliver great destruction at impressive range. They are most effective when deployed against masses of slow-moving enemy infantry, as their missiles are flung with enough force to tear through many ranks of soldiers. These engines are pushed and worked by stout Dwarves who will fight determinedly in their defense, but a wise commander will take care that the crew and machines are well protected against a sudden attack. 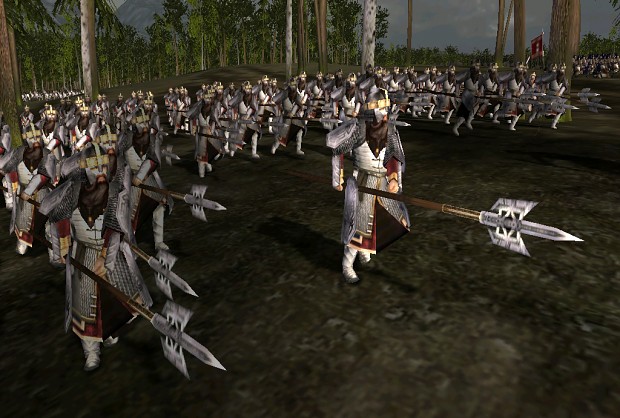 These superior soldiers of the Dwarrowdelf wield an axe-headed lance with both arms, bringing their full – and considerable – power to bear. The weapon lends itself to fighting enemies best kept at arm's length; Trolls have grown wary of the Longaxes and their cries of 'Baruk Khazâd!' - 'the axes of the Dwarves!' - but any Orc or servant of Sauron will be hard put to it to rout these staunch defenders. In an army renowned for steadfastness and strength, these are amongst the most resolute warriors. Their finely crafted armour of Dwarven steel can turn most blades, and a Dwarf can endure injury and hardship better than any that walks Middle-earth. Long have the Guards of Khazad-dûm defended the great Dwarf-city founded by Durin I himself, and any wise commander would include them in his army. 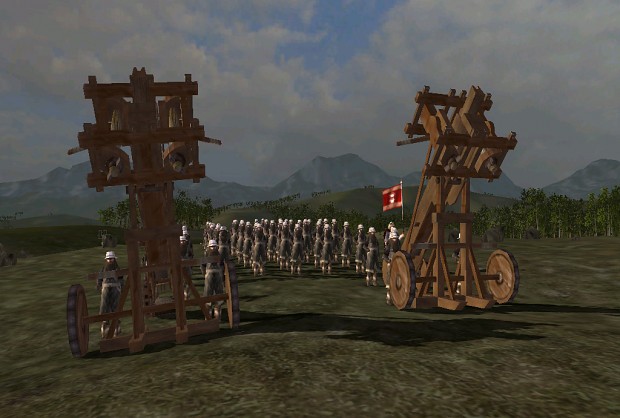 The Dwarven Siege Ballistas are a terrible force on the battlefield. By far the largest siege engines constructed by the Dwarves, these tools of wood, metal, and sinew hurl stones or fiery missiles over great distances and with devastating force. Against walls or gates, the stone missiles are more effective - and the crew are equipped with enough stones to reduce several sections of even the highest walls to rubble. Against troops, the fire-filled clay pots can wreak fearful destruction, engulfing dozens of enemy warriors with only a few volleys. On attack or defense, the siege ballistas are one of the most terrifying and effective weapons available to a Dwarven captain. 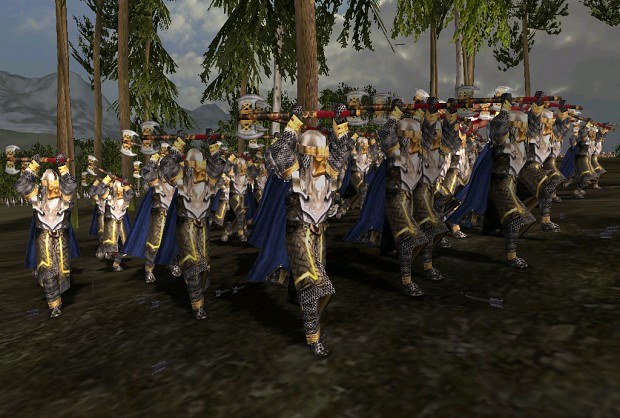 The Dwarves were made to endure, and those who guard their lord and kin in battle are the very hardiest of that race. Wearing face masks like those of the dragon-slayers of old, these warriors - and their enemies - are reminded of the great company in which they stand, guarding King Durin VI and his kin with fearless and faultless obedience. Their axes are forged of mithril inlaid with gold, and their armour is reinforced with the same silver-steel. Indeed, the only better equipped soldiers in all Middle-earth are the warlords under their protection. The Dwarves in this company are the most formidable of the Dwarven army. 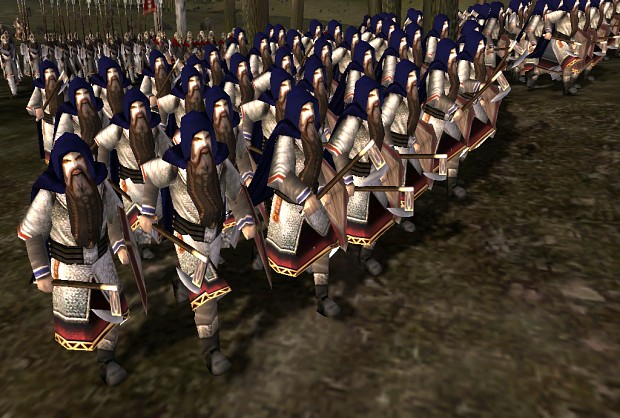 These most well-known of the Houses of the Dwarves have their chief mansions at Khazad-dum, founded in the deeps of the First Age by Durin I. Yet the Longbeards are often found outside this great city, trekking from the Ered Luin in the West to the Iron Hills in the East. When travelling, they go equipped with fine gear, befitting their descent from the Eldest of the Fathers of the Dwarves, often clad in hoods of deep blue and bearing axes inlaid with precious metals. Companies of Wandering Longbeards are eager to lend their strength to a Dwarf-lord of suitable station. 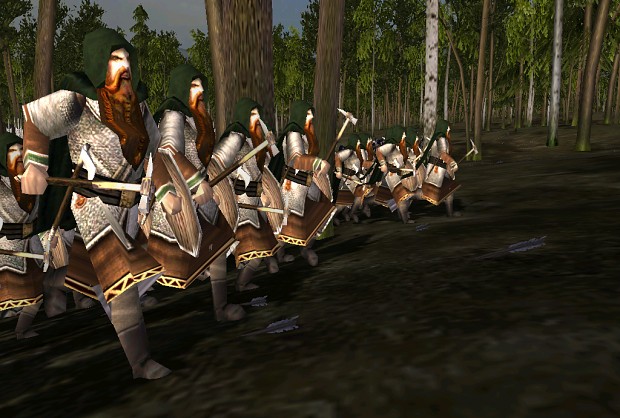 Like the Broadbeams, the Firebeards had their ancient mansions in the Ered Luin, and together these two Houses were renowned for forging some of the mightiest arms and armour that Middle-earth has seen. Although their peoples have dwindled somewhat over the centuries, with many Firebeards choosing to settle in Khazad-dum after the destruction of Beleriand, others remain in the Blue Mountains, and can even be found travelling the long roads between the far-sundered Dwarf kindreds. Often armed with a hammer and a pair of balanced throwing axes, they make a stubborn and deadly company, eager to take up service with a generous lord. 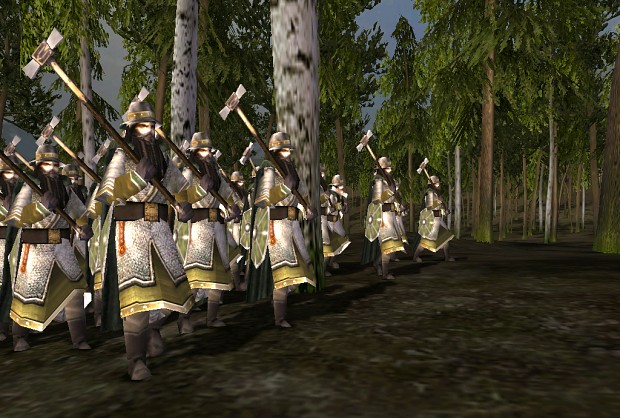 In ancient days, the Broadbeams delved their mansions in the Ered Luin, and while many members of this House removed to Khazad-dum in the early years of the Second Age, Broadbeams can be found dwelling in the Blue Mountains still. Outside of their halls, companies of this kindred sometimes travel on business unknown to the other peoples of Middle-earth, trading or visiting the Dwarf-cities and colonies of their far-flung folk. Wandering Broadbeams often go heavily equipped, with tools as well as weapons and armour, and will contract with a Dwarf-lord who has need of their formidable services. In battle, they are doughty warriors, shrugging off arrows and blades as they swing their long-hafted hammers.


In Wainriders, we finally have the long desired opportunity for multiple Dwarven and Elven factions. Of all the potential Dwarven factions in the mod, the Dwarves of Khazad-dûm are certainly the strongest, but also the proudest and most insular. Since the shutting of the West-gate around S.A. 1697 Durin's Folk have increasingly looked inwards, and downwards, and now have few dealings with elves or men. Therefore this is a purely dwarven faction; others will be more cosmopolitan.

Count and I regularly go over all the source material for this period and generally discuss every last detail of what goes into each faction, so if you have any questions about the omissions, changes, and inclusions for Durin's Folk circa T.A. 1864 post them below or over at twcenter.net and I'm sure we will have some interesting answers for you!