VRM0.5 right around the corner, the last VRM release by doctorheredoctor.

Hopefully within the next few days VRM0.5 will be available on the downloads section of our page here. I'll also put up a preview video real soon to showcase some of the changes - many of which you've already seen in the released renders - but it's nice to see them driving around in-game too.

VRM0.5 will be the last VRM update made by me. If anyone wants to see development of this mod continue, they will have to do so themselves - although I would be glad to offer assistance. I didn't have time while working on the mod to to replace the majority of buildings. As it stands, only the USA HQ and China's gatling turret are really replaced in-game, and the USA HQ only partially. Several infantry have been reworked to include placeholder higher resolution and more realistic skins (they're still pretty ugly, really) as well as to include team-colors which had vanished in previous releases. Every vehicle in-game has been replaced with the exception of combat-bikes.

I spent the last few weeks polishing 0.5 so that all (or neeaarrly all) units would have damage and death models, nice junk upgrades, various animations and nicely placed teamcolors. Many new cameos and a new shell map will also be included. Even a few custom weapon animations/particle effects have made it in as well.

This being said, there are still some bugs stuck like a thorn in my paw. Some are subtle, some aren't. They range from things like "turret elevation of Inferno cannon doesn't accurately reflect projectile trajectory" to "US Dozer doesn't follow correct path when leaving HQ building" to "Skirmish saves with Laser General are corrupted". A wide variety, some no big deal, some really frustrating. Sorry I just couldn't fix 'em all. It was fun however to fix one or two issues this last week which had been with the mod since V0.1, hooray!

So, expect all that soon, here's an anaglyph 3D Leopard 2A7 in the meantime (clicky for fullscreeny). 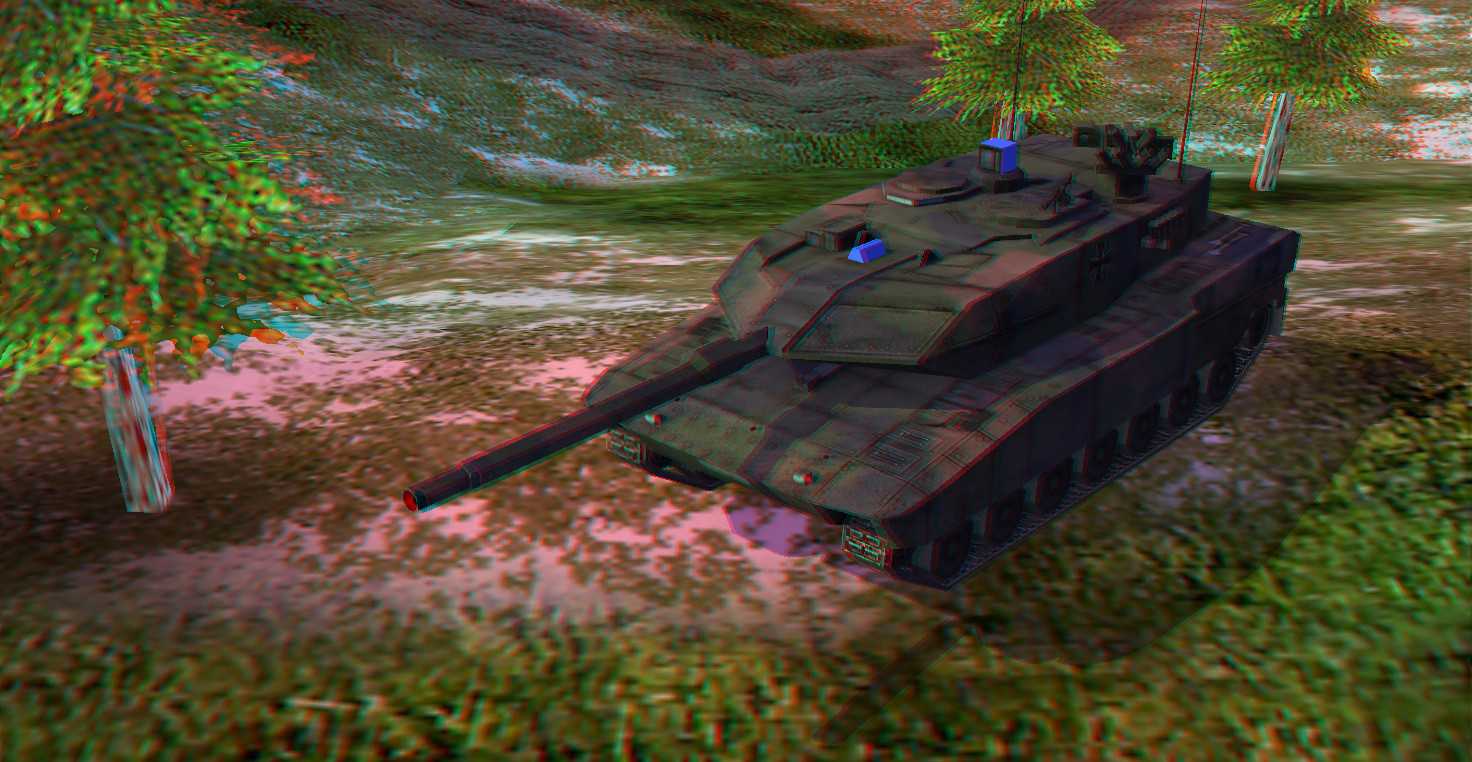 Thanks, i am your fan. please take your time.

Really, thanks for your mod, it's so cool :) I was happy each time you put a new version on download ! (and I will keep it on my external HD for the time I get CCGen on my computer again) I will be sad to not see any update beyond this v05.

Sad, but thank you for the awesome mod I'm really enjoy

Sad end to VRM but still 0.5 will be an impressive release. Thanks to everyone including the community for their support and ideas/comments.

Manse VRM!
Sad, I was hoping that this would go further, but then again, I am not running it.

That being said, anyone who wants to continue making it is free to do so and just needs to PM me to get access here.

Read the first line of the news article that you are commenting on.

"Hopefully within the next few days VRM0.5 will be available on the downloads section of our page here.".

Thanks for v0.5 idol dhd. i will keep this mod even when i grow old.

Its a BUG with quad cannon when play any GLA generals, if you take a scrap you see only wheals, mod works in 100% only when play norma GLA