This week we introduce some new art from our new talented artist, David! We also release the last chapter of our background story. We also give you three ripe screenshots from a new level!

Roy looked up to see his friend examining a nearby car, behind was a sign with various places listed on them, arrows pointing to their respective destinations. There were three such locations, “barnhem, sjukhus and stadshus; the arrows all pointing the same direction, further into town. Roy didn’t know what they meant as he had never formally taken a second language in his life, but he had thought ahead before the long drive and pulled a small book from his pocket. It was a Swedish to English dictionary, and he thumbed through the pages until he came upon the first one.

“Barn-hem,” he knew he had pronounced it wrong, but no one was there to correct him, “Orphanage. Huh, I think that sounds like as good a place as any to start getting some dirt and maybe a few pictures for the article.”

“Alright then, let’s go.” Adam was as quick and confident in his speech as always, only in the writing of his articles did his true talent for the English language showed itself.

The two of them hikes up the street a ways, following a sign or two until they made their way to the orphanage. It was quite large and secluded just on the outskirts of town, surrounded by trees and over grown foliage. Roy took the opportunity to snap a few photos before they tried the front door. It was locked. The duo tried with great effort to force it open but to no avail, it was most likely barred shut from the inside. With a soft sigh Roy sat on the stoop, while Adam made his way to the side of the building.

Roy groaned as he got up, the long walk there had fatigued him slightly and the step offered a nice place to regain his energy. He quickly made his way around the corner of the Orphanage, and there was indeed a very rusty old cellar entrance. Adam had opened it and was peering into the darkness below by the time Roy made his way over. The two took quick lances at each other, they both knew that one of them would have to go down and investigate. With out a word they reached their hands to one another and with that it was decided. Rock beats scissors, Adam would be the one to descend. 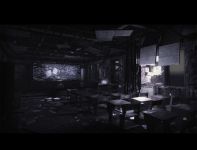 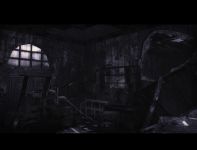 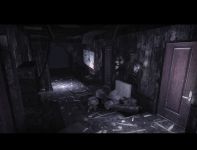 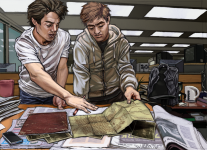 We've got three new team members too! First of all, I'd like to introduce our new concept artist; David Müller, who's given our MODDB page a completely new look by updating our body image! Second member is Schoft, a very talented level designer from the Netherlands. And last but not least, a modeller by the name of Dennis "Cannon (pew pew pew!)" Norheimer! These guys will help us make sure that Visage doesnt turn out as anything other than one of the best mods evarrrr!

Modeller:
Must be experienced with Z-brush, 3dsmax, Maya or an equivalent program. Must know how to unwrap models as well as to skin them. Knowing how to compile models is a huge plus but is not required.

Animator:
Must be experienced with 3dsmax, Maya or an equivalent program. Ability to rig models is a huge plus.

Would the title of this be a reference perhaps to the rapper Necro?

Schoft had told me he was on Visage now but I did not believe him until now. :D

Great to see the team growing !

hehe, if this part is included in the game you HAVE to find a way to do a rock-paper-scissors anim in first person :D
On a serious note, interactions between characters could seriously increase immersion. Imagine mini-cutscenes where the camera remains in first person

Immersion is very important to us.

very nice :) Looking forward to this even more now

Nicely written I especially liked the part about his literature skills with the "...did his true talent for the English language showed itself." :P

Why would an animator need experience in ZBrush? ZBrush is a sculpting program o.O
Script looks great, concepts are nice. Maps are awesome! Great work! :)