This weeks update contains our 2nd video update along with a new street post by MrCupCake AND the announcement of the development team's arrival.

Hey everyone lets start off with the latest video update shall we?


Also this week MrCupCake has sent me a model for a street post: 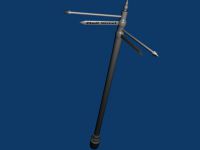 and last but not least! I will talk about the development team :D

You may have already noticed it when it was setup this week (with most of its logos being made by Salsa_Shark <-- thanks :D) anywho the dev team is now setup and working so I can now fully account who is on the team, We are still waiting on more members and I would like to say this to any discouraged coders,

I've read on the UDK website that you CAN use C++ and other coding styles in the UDK Engine because it has something to converts it essentially into Unreal Coding so no worries if that was putting you off from coding with the UDK engine although on that note it is rather restricted with coding.

any way hope you all enjoyed the update! (Sorry for uploading it a little late to day...)

sweet, next time make you mic a bit louder though lol

Yeah sorry about that, I should have spoken louder to be hounest.

To be honest with you, I don't think you have enough experience to create a game of this scale. UDK is an awesome tool, I have been working with Unreal engine for a while, and even I wouldn't do a project like this.

Try to think smaller. First create a really small game with UDK so you know everything about it. Then you can look if it is possible for you to create a project this big.

Tip with underwater. Use post process volume, change DoF and scene colors.
For the fracture mesh. To get a more detailed destruction, right click on your fracture mesh in the content brows and create a PhysX destructible out of that.

Good luck with everything ;)

Thanks for the advice, But I really wanna give this a try!

Even If I don't end up finishing it and somebody else does I'd like to give the project a good start at least.