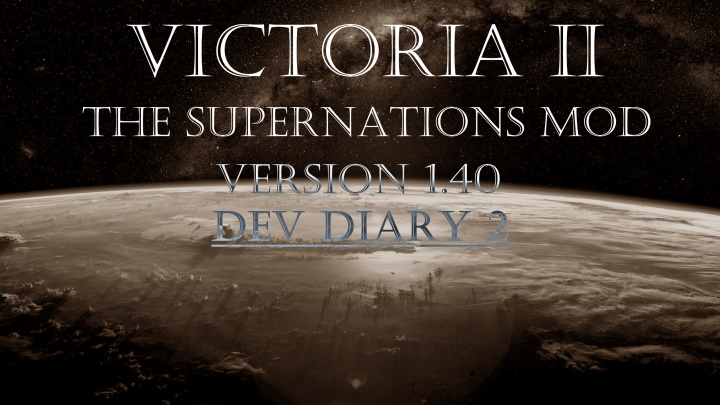 Victoria II: The Supernations Mod brings you its second official Dev Diary! This Dev Diary focuses on the "Filibuster War" of he 1850's. In our timeline the Filibuster War took place after William Walker led a group of American "colonists" (Who were in fact contracted soldiers by the then President of Nicaragua) to Nicaragua where they ultimately fought on behalf of the Democratic Party's President against the Legitimistas. Ultimately Walker would win the civil war and become the next President of Nicaragua. However his threats to conquer the other Central American states as well as petition to join the Union directly led to the Filibuster War, where a group of Central American States banded together to oust Walker from power. Walker ultimately lost the war and was extradited by the United States Navy, officially ending the Filibuster War.

What if events turned out differently however? This event chain explores the What If's of the Filibuster War. Experience the war within your own campaigns. Either back the Filibusters and Walker, or band together with the other Central American states in ousting Walker from power. However, banding with Walker may lead to some very interesting events. 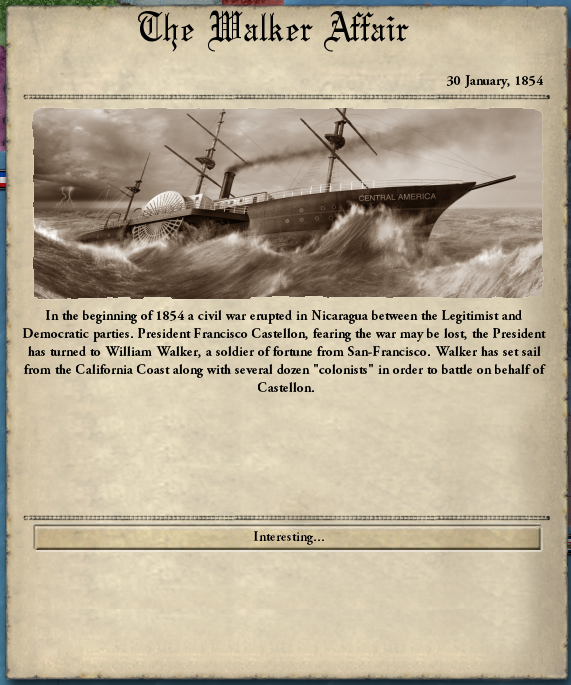 The Event Chain starts out with a notice in the mid 1850's of a Civil war erupting in Nicaragua, and an ambitious Soldier of Fortune leading a contingent of men to aid the Democrats on their side of the Civil War. Once he lands in Nicaragua he is reinforced by several hundred locals as well as Americans and goes on to win several battles and win the Civil War for the Democrats. 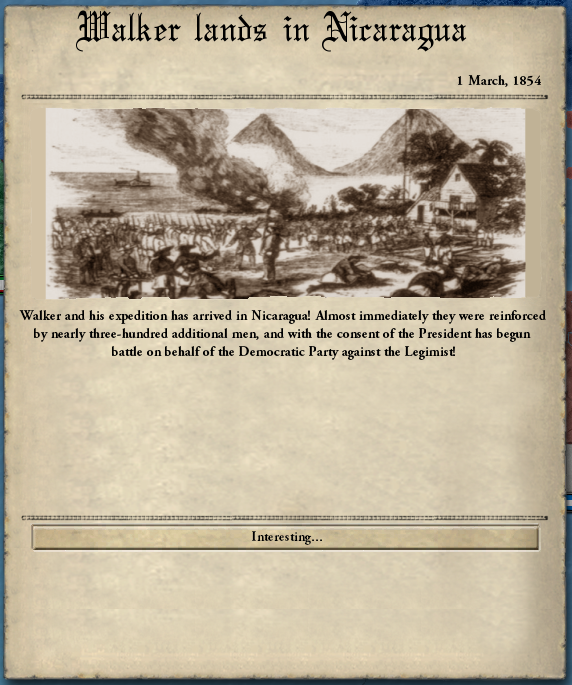 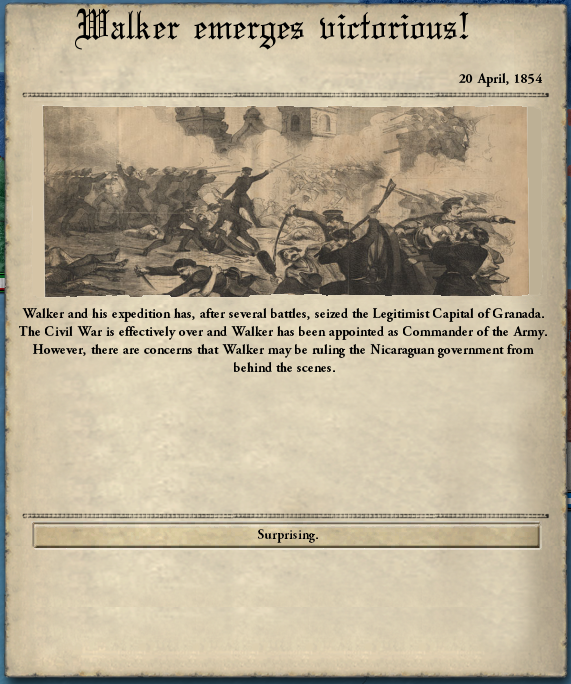 After winning the Civil War, Walker goes onto eventually become the President of Nicaragua through a pseudo-coup. This is when things really begin to get interesting. The Player will see Nicaragua undergo a tag change, resulting in Nicaragua being renamed to "The Filibusters", and immediately after Costa Rica declares war on Walker starting off the Filibuster War. Now, in this case Walker is actually given some major buffs to mobilization. As such Walker will typically be able to deploy about 20,000-30,000 troops to the battlefield. Combined, the rest of the Central American nations have about an equal amount of troops. As a result there is a fairly even chance that Walker may either lose or win.

And, while not shown below, the player will have the opportunity to ally themselves with Walker and potentially join the war, stay neutral, or attack Walker themselves and join the Central American States in the Filibuster War. 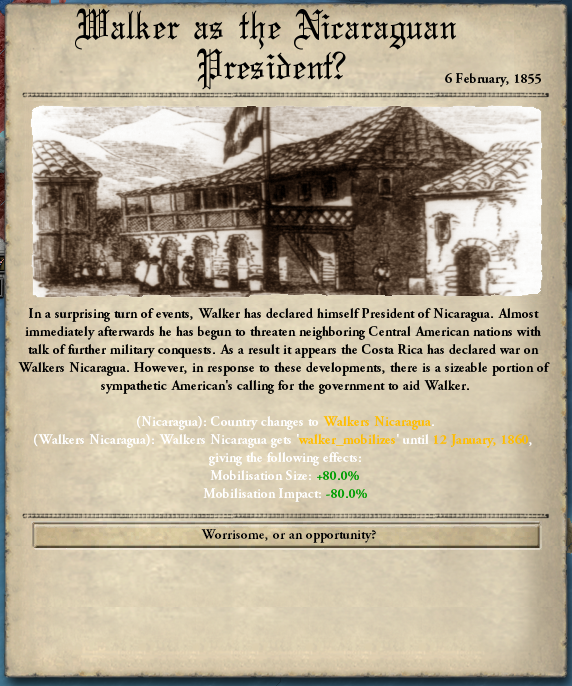 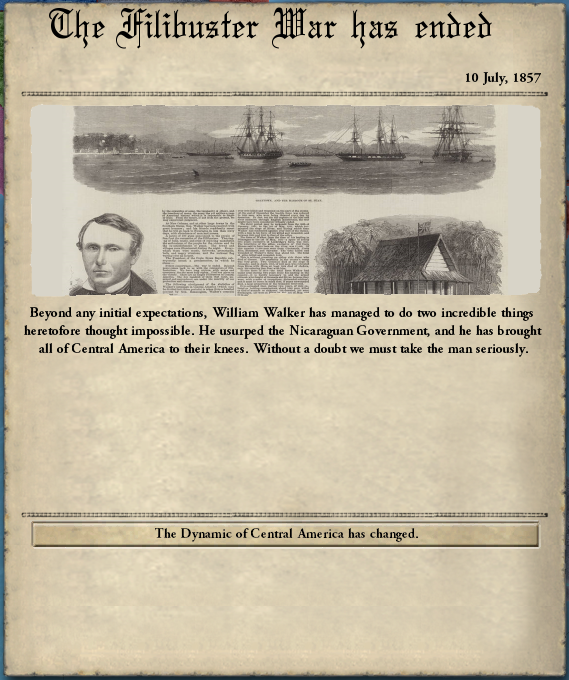 Should Walker win the Filibuster War, the Player will see a fairly hard dynamic shift in Central America. The Filibusters will have effectively taken control of the entire region. 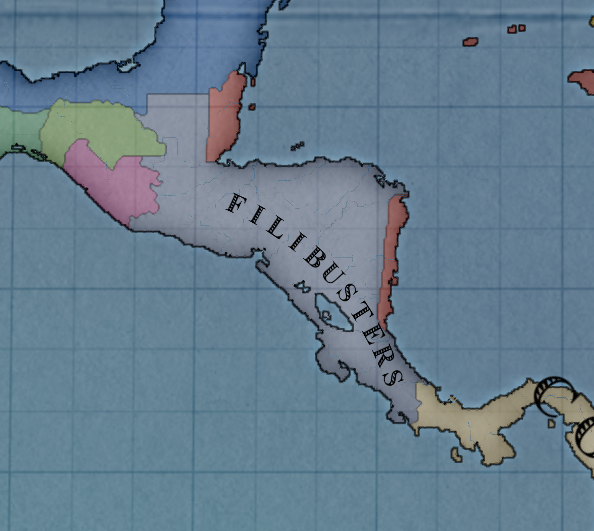 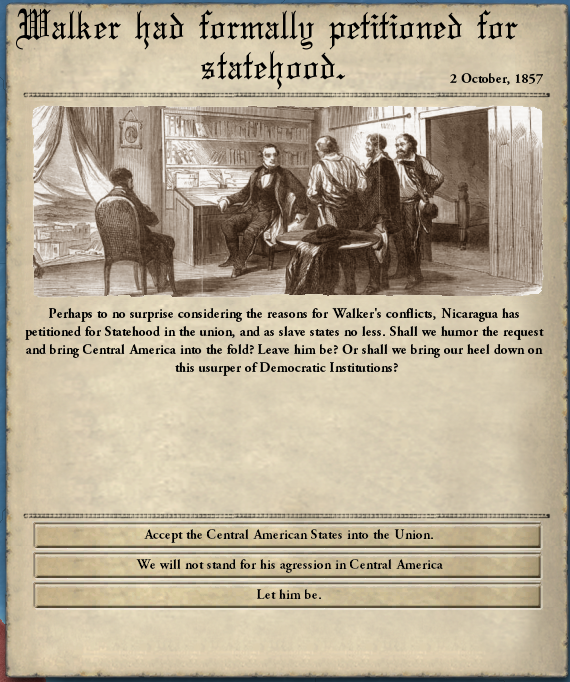 After several months however, Walker will petition the United States for statehood. Effectively completing his goals of adding the Central American States as Slave States in the Union. Only a few short years later however, the Civil War will ignite, and this would prove to be a much harder Civil War than was ever conceived of in our own timeline. That's pretty much it for this Dev Diary! Short, but sweet. Hope you'll find the Filibuster War to be quite entertaining! See ya all later!

Playing as Walkers Nicaragua is definitely possible! I haven’t actually bug tested the nation, so I’m not sure whether they will be able to avoid annexation by the US. Haha. But I can look into it if you run into any issues!