Post news RSS Version 1.0.2 with a side of fan art

After a month of intense feedback from fans, we're excited to finally release version 1.0.2. This version fixes literally hundreds of issues and should squash a lot of problems that people have been running into. Also featured in this post is some absolutely stupendous fan art!

We've been hard at work this past month and are happy to finally bring you TNM, version 1.0.2! This patch contains more than 200 fixes (view the change log for full details) and should put a stop to a lot of the crashes people have been running into as well as generally polishing up your entire gameplay experience. Grab it here:

While we've been busy polishing TNM, fans have been busy playing it. We've reached over 7000 downloads and have been receiving some incredibly positive feedback. Between the insightful posts on our forums, entires on our wiki and some stupendous fan art, we've come to release that Deus Ex (and subsequently TNM) has some very talanted and generous fans! Here's a sampler of that fan art that I mentioned, created by teknikal (and the kind of stuff we wish we'd had as concept art!): 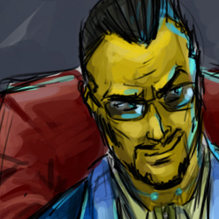 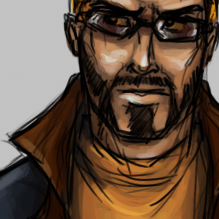 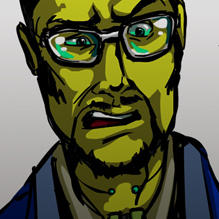 If you read her description, it's based on a voice acting blooper included with the bonus material :)

7000 downloads? Nice. It's great to see that the Nameless has such a great following. Well, it IS a great mod.

Who's the voice actor for the player? You should've written more Postal Dudesque glory one-liners for him.

Actually, nobody on the team realized the similarity until we released and people started point it out, constantly :p Jeremiah Costello (http://jeremiah-costello.com/) was the voice actor for Trestkon.

Question, Does Jonas really sound like that? lol :D

Yes and no: I do sound like that, but I don't talk like that. For a sample of my normal voice (but also my native language), pay close attention to what's written on the walls in DXI. Alternatively, here's a good sample of how I normally talk: Moddb.com

Flattery sustains us. Thanks ;-)

Thank YOU for letting me voice act in the mod!

very nice work! :) When I first saw the preview image on the frontpage, I thought it was a Simpsonesque Mr. Burns-like drawing :D

Say, are those all chapters you can read of the two fan-fics or are there more on the web? One of them is really good :)

The two exposed in the fan fict shop.

They're split across the two days the game takes place over. So return to the shop on September 2nd to read the last half of both stories. Alternatively, Twist can be found here in its entirety:

I don't know if Unknown Motives is available to read anywhere online anymore.

Yay, patch! Finally I get to start my next playthrough!
Also cool fanarts, it captures the essence of the characters' beardage remarkably!