Let's keep on with some news and stuff with the V.W.S 2 ! 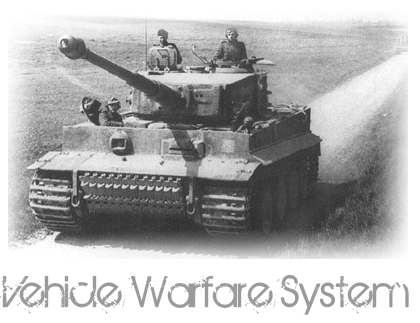 So, I don't know if you can recall it, but a few months ago I post about what I call the Vehicle Warfare System. Well, after finding new informations from many sources about armored warfare, weapons and vehicles, I think I can say that the way tanks fight and the way they endure hits is getting closer to reality.

Today's exemples will use the Panzer VI "Tiger" Ausf. E and the M4 Sherman.


Ok, so most of you might already know that the Tiger was hell of a beast to take on. Well it's still the case here as it should be. In front, you have the famous M4 Sherman, the main tank of the United States during the war, but not as efficient as the german Tiger. So let's have a look at those stats shall we.

So, as you can see, there is a good gap in the armor thikness of the two tanks. The armor is obvioulsy the principal indication of how much punishment it can take and here the Tiger is well above the Sherman. This mean that in this engagement the Sherman must not stay put nor hold its ground, it wasn't called the "Tommy cooker" for no reason, it won't hold much and will be knock-out by most german tank and AT weapons on first hit.

Now on the main gun side. The 8,8cm KwK 36 of the Tiger is a fine exemple of a great gun, it's accurate and can pass pretty much any armor the allied tanks could have. In the rate of fire departement, it is slow, deadly but slow, this mean it can't handle too many target at the same time, especially targets that can hurt it. On the other side you have the 75mm M3. This gun is not what you can call a great one, it lacks armor penetration to take most of german tank face first and it is not that accurate too. But, it can fire with a good reloading speed (only slower than the M8 Greyhound in the actual version), meaning that if it finds a weak spots, its over for the target. And if you look back at the armor stats of the Tiger, you can see that the side armor is just weak enough for the Sherman to damage it at close range, not much but just enough.

So how can this fight be balance ? ( cause it is trust me ) Well it is simple, the Sherman is more agile than the Tiger, it can easily shoot first, then move away to reload and strike else where. So if "A wild Sherman just appear !" on the Tiger's flank well, it shoots, hit the soft point, then move away easily. Something else that is not present in the stats but that is in the game, is the turret traverse speed (how fast does it turn around). The Tiger's one is only 6°/sec, this mean that to aim at the Sherman on his flank it will take about 15 seconds. The Sherman reloading speed ? 60seconds / 17RPM = 3,5 seconds. The Sherman have enough time to shoot four to five time before the Tiger can even aim at it.

Conclusion ? Well, even the Sherman can take on the mighty Tiger ! But it require a certain tactical aproach. And this kind of aproach is not easy if the tiger is protected by infantry or other tank like the Panzer IV. But it still got a chance and the price will be way appart from each other, so it is easy to exploit the Tiger's weakness with numbers, exactly how it was in the 40's.

So, I hope this is to your taste and I will come back eventually when I find out where I left my CoH serial.

You just posted the technical specifications of the Sherman and the Tiger tank.

How will that relate to your mod bearing in mind how certain functions of both tank's will be hard to simulate in the game?.

Well, every of those things arent hard to put ingame at all or to simulate. This is also to inform how they behave. Nothing much can be done on the mod actually, I'm still trying to find my CD Key and THQ support is no help.

Well, this is hard to tell. Some sources say it does, while others say something else. So I looked at blueprints and I'll use the 60mm since it is the majority of the side armor of the Tiger who use that thikness.

All that with armor Scheme