As we inch closer to launching Sven Co-op on Steam, I’d like to provide an update on our progress with the game. Since this upcoming release is important for us to get right...

As we inch closer to launching Sven Co-op on Steam, I’d like to provide an update on our progress with the game. Since this upcoming release is important for us to get right, we’ve been taking extra time over the past few months to really get our ducks in a row. Even so, our team members have run into delays from real-life™. However, now that summer is over, things are picking up again. The team has been working full-force on getting major milestones accomplished for the launch.

I’m going to discuss a few upcoming major features in v5.0. These aren't all of our upcoming features, but they will be fairly important to v5.0’s release. Please bear in mind that we will be continuously updating the game after v5.0 is complete.

Sven Co-op v5.0 will feature the Angelscript scripting language. Angelscript is a powerful scripting language which models itself around the C/C++ language, minus the memory management headaches. If you're good at programming C, C++, Javascript, PHP, or other similar languages out there, you can jump right in.
That said, this is the most groundbreaking feature coming to the next release. If you’re wondering what the big deal is – well, let me explain by providing the following video:

Well, there you have it. It’s that big of a deal.
Okay, so, now you're wondering what this will allow for...

Angelscript will allow mappers to change almost every aspect of the game. It's possible to create game entities, implement new styles of gameplay, trigger events, process and control NPCs, and much more. Each map will have the potential to be a "mod within a mod" allowing for the ultimate level of customization.

In v5.0, we will be bundling our own server administration toolset. A set of official plugins will be provided, but you can write your own using Angelscript. If you've ever used AdminMod or AMX Mod X, the transition should be pretty easy to follow. While it will be experimental at launch, we will eventually be recommending Server Administrators switch over to this new toolset as we stabilize on functionality and features. Sven Co-op's server administration toolset will have more integration points with the game, which should allow for the creation of more interesting and useful plugins.

We’ve made a lot of progress getting Angelscript up and running with all thanks to our new programmer Sam "SoloKiller" Vanheer. Sam joins the programming team after being an active beta tester for many years. His current primary role is technical lead for Angelscript.

I personally look forward to seeing what the community can do with these new found powers. We'll have more information regarding Sven Co-op's scripting documentation in the future, but for now I would recommend you start browsing the scripting language overview here to get an idea.

NPCs can now be scaled during the game at any time. The AI and the Half-Life engine have been updated to account for scaling of hitboxes, eye positions, collision hull sizes, effect locations, and more. If you scale an NPC up, they’ll be able to see over obstacles, move faster, and jump down from greater heights (because they’re giants). If you scale an NPC down, they’ll be able to get into smaller areas, find cover from shorter objects, and move slower (because they’re tiny). Basically, scaling an NPC up or down has inherent advantages and disadvantages which will make for some interesting gameplay. We look forward to seeing what the community makes with it! 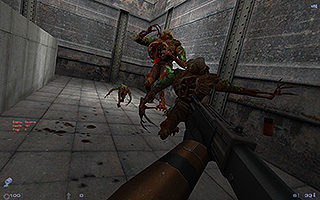 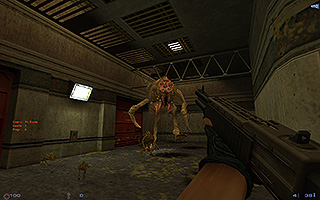 We’ve heard things loud and clear from the community. We’re in the process of addressing difficulty levels with NPCs and Players. We’ve cut out the fat from the skill system and added a few new features in the process.

Half-Life’s numerous skill values for each NPC made balancing a difficult task. To address this, we’ve removed the “skill 1”, “skill 2”, and “skill 3” settings from the core skill configuration file. For older levels that relied on these custom skill values, they will continue to work through a backwards compatibility design that relies on the map’s specified skill level. Furthermore, "skill levels" can continue to be used if the map author wishes for their map.

In the process of updating the skill system to be more streamlined and fair, we have added new values to existing game entities (mainly for NPCs). Each entity will gain the ability to change their damage values in real-time through the use of per-entity attribute settings. Since each NPC or Weapon can have their own unique damage values, this allows for all sorts of gameplay possibilities.

A few quick examples could be:

Without further ado, here is our preliminary v5.0 changelog. We’ll post a more up-to-date version of the changelog as we get closer to launch.

If you have any questions or comments, feel free to post in the forums.
Be sure to check back next week for more updates on v5.0. We have a few more things in store.

Great stuff. Can't wait for that Steam release.
It's great seeing all these amazing mods migrating to Steam (NMRiH, Estranged, FoF), and Sven Coop is going to consume a lot of free time from people :)

Hopefully there will be an Afraid of Monsters 24/7 server as soon as it's released on Steam.

Agreed! I miss the server.

a new updates, saw the big changelogs and then me ***.

Great! does that means some map will allow players to upgrade their stats too?

It's ALIVE! D:
Whatever you do, DON'T kill it with fire!

"move faster, and jump down from greater heights (because they’re giants)."
That's not how reality works. But whatever. I smiled.

This is the future of all HL-modding

This is darn amazing. I didn't know that a game like Half-Life, with just... Uhh. Years of coding I should say, could turn into this. Can't wait for the Steam Release! Hope to hear more soon!

I hope using that "Angelscript" language it is will be possible to create fully new player weapons.