We improved the combat speed and responsive controls.

Before we improve AI and add a storyline, we focused on the combat speed and responsive controls last week. The combat in this game is relatively slow and heavy as a result of emphasizing player's plans and decisions. Although these things are features of the game, there were feedback regarding the slow attacks and controls. We’ve considered these issues and decided to improve them.

The first is attack speed. The meat tenderizer was especially difficult to use and it now attacks faster. Some normal speed weapons became a little faster. The weapons that should be slow are still slow. The weapons now have more personalities.

Regarding the responsive controls, there was something we missed. Your feedbacks let us know. 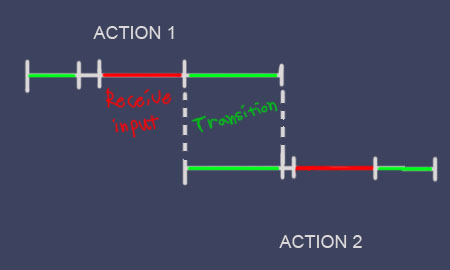 That was the problem and we changed it. The game now responds to the input in the “Transition” except attacks, and the controls are more responsive. The reason why attacks are excluded is that the game has the combo system. We don’t want button-mashing to have the effect similar to the combo.

(The kick couldn’t have made him stumble.)

When you kicked the enemy who was guarding, sometimes the enemy released guarding right before getting kicked, and attacked you. This feels quite unfair because the kicking motion is long and not cancelable. In this case, we decided to reward the player for making the right choice. So when you kick, if the enemy is guarding, it will make the enemy stumble unconditionally even if you cannot break the guard. Also, we changed the kicking motion so that it is much quicker, more wild, and easier to understand that the motion is progressing.

One of our devs has desired to show fun gameplay all the time. So she eventually recorded her gameplay. The following is the video edited at 1.5x speed.

Your words always give us direction and inspiration. We hope you like the update.